‘Like a ship in choppy waters’: The IMF thinks economic pain will drag into next year, cutting its 2023 growth forecast 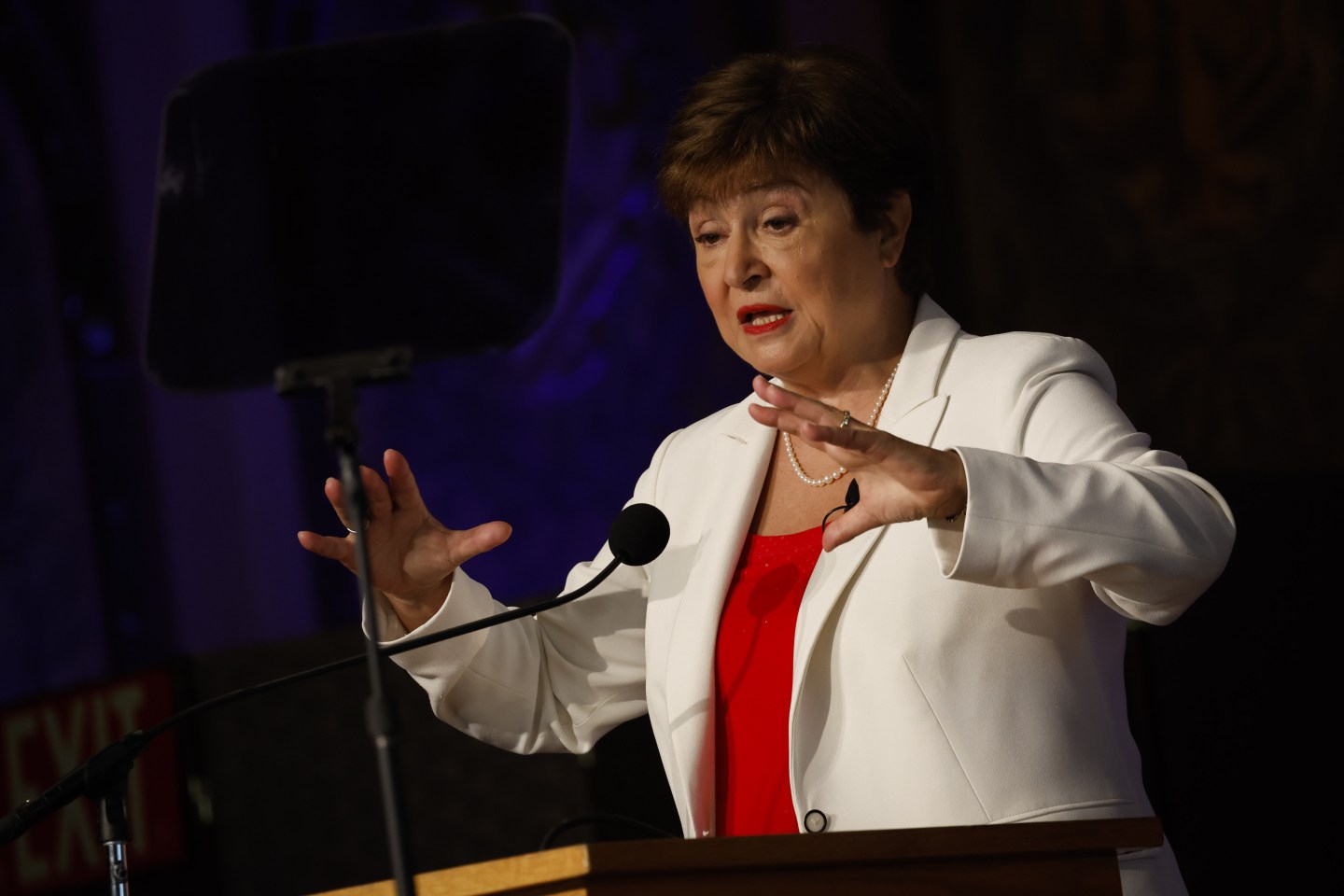 Kristalina Georgieva, managing director of the IMF, said in a speech at Georgetown University on Oct. 6, 2022, that the global economy was “like a ship in choppy waters.”
Ting Shen—Bloomberg/Getty Images

The global economic outlook is darkening, and we’ve yet to face even more treacherous “choppy seas,” according to the International Monetary Fund (IMF).

Speaking at Georgetown University in Washington, D.C., on Thursday, IMF managing director Kristalina Georgieva said that next week, the organization would downgrade its 2023 global growth projection.

“In less than three years we lived through shock, after shock, after shock,” she said, referring to the pandemic, Russia’s invasion of Ukraine, and a series of climate disasters. “Our world economy is like a ship in choppy waters.”

She did not specify what the IMF’s new growth forecast would be, but the organization has already slashed its growth forecasts three times, with its most recent revision bringing the projection for next year’s growth—which will be downgraded next week—down to 2.9%.

Warning of a “darkening global outlook,” Georgieva urged policymakers to stabilize their economies, adding that the IMF believed one in three countries was heading for at least two consecutive quarters of negative growth in 2023.

“Even when growth is positive, it will feel like a recession because of shrinking real incomes and rising prices,” Georgieva said.

The textbook definition of a recession is when an economy contracts for two straight quarters. However, the U.S. National Bureau of Economic Research—which defines a recession as a significant decline in economic activity that is spread across the economy and lasts more than a few months—considers several areas of economic activity as potential recession signifiers, including real personal income, nonfarm payroll employment, and industrial production.

The IMF expects the global economy to lose $4 trillion of output between now and 2026, Georgieva warned on Thursday.

“This is the size of the German economy—a massive setback for the world economy,” she said. “And it is more likely to get worse than to get better. Uncertainty remains extremely high in the context of war and pandemic. There could be even more economic shocks. Financial stability risks are growing: Rapid and disorderly repricing of assets could be amplified by preexisting vulnerabilities, including high sovereign debt and concerns over liquidity in key segments of the financial market.”

Georgieva also issued a warning to central banks, saying the economic backdrop meant they had to approach their remits more meticulously than ever.

“The cost of a policy misstep can be enormous,” she said.

Not raising interest rates enough would lead to “de-anchored and entrenched” inflation, according to Georgieva—but tightening monetary policy too much and too fast, particularly if this is done by multiple countries at once, could push many economies into prolonged recessions.

“Inflation has remained stubbornly high and broad-based—which means that central banks have to continue to respond,” she said. “In the current environment, this is the right thing to do: Act decisively even as the economy inevitably slows. This is not easy, and it will not be without pain in the near term. But the key is to avoid much greater and longer-lasting pain for everybody.”

Georgieva is the latest prominent figure to warn that central banks’ jobs have become much more intricate—and that the consequences of policy mishaps could be dire.

In an interview on Thursday, former U.S. Treasury Secretary Larry Summers said the wrong monetary choices from the Federal Reserve could be “a prescription for much higher interest rates and a sustained and very difficult stagflation that would have serious global consequences.”

Meanwhile, many of the world’s top economic minds and business leaders are convinced a recession is looming, with a slew of banks predicting that the U.S. economy is set for a “hard landing.”