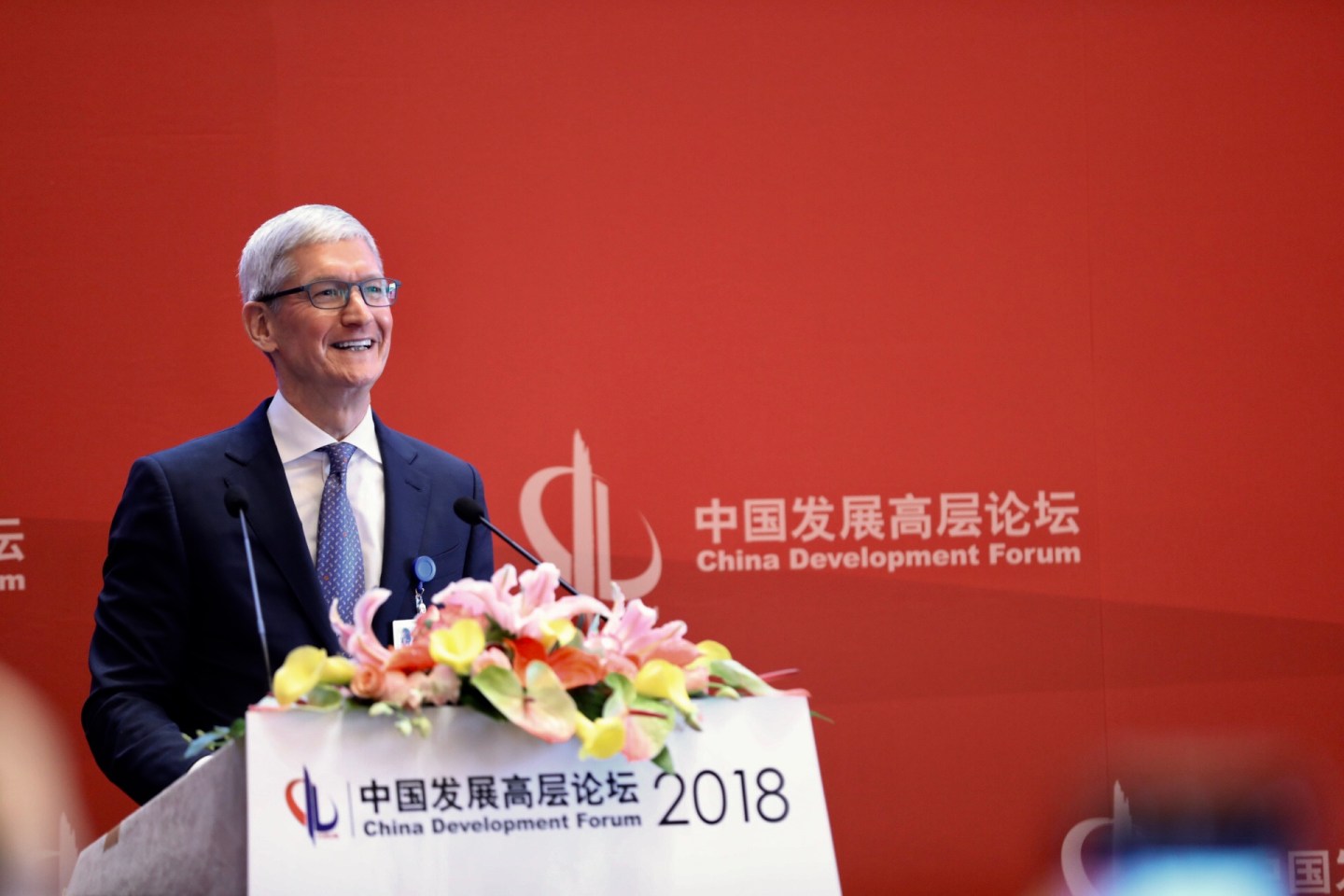 Apple made international waves this week by confirming plans to assemble some of the first iPhone 14s in India. Investors, analysts, and geopolitical pundits interpreted the development as a sign of Apple’s intentions to reduce its reliance on China, where local companies have exclusively produced the initial wave of iPhones.

Yet all of the coverage about Apple’s move has lacked a key data point: exactly how many iPhone 14s will be made in India. The answer is “not that many,” based on a new, sobering analysis from Bloomberg Intelligence.

Apple would need eight years to shift a mere 10% of its production capacity out of China, a practically glacial pace in the fast-moving tech world, according to the Bloomberg Intelligence estimate. As it stands, Chinese contractors produce more than 90% of Apple products, including an estimated 98% of iPhones.

The analysis throws some cold water on a convenient narrative emerging about fissures between Apple and China.

Over the past few years, multiple news outlets have documented Apple’s desire to wean itself off Chinese partners.

The urge to diversify reportedly follows frustration with the Chinese government’s strict COVID lockdown policies, which have hurt short-term production and reinforced long-term concerns about the autocratic regime’s influence over business. Apple also reportedly wants to hedge its bets against potential geopolitical crises between the U.S. and China, which are engaging in a low-key economic cold war.

These reports are well-founded. In addition to this week’s iPhone-India shift, Apple has moved some iPad, Watch, AirPods, and HomePod production to Vietnam over the past three years. Apple hasn’t exactly shied away from praising its many Asian allies, either.

Yet news coverage has been conspicuously light on specifics when it comes to units and percentages. This isn’t a critique of dogged reporters trailing Apple, a notoriously secretive company. Rather, it’s an acknowledgment that we know very little about the scope of Apple’s divestment from China—or how to interpret it.

Apple’s recent embrace of India and Vietnam might amount to little more than expensive saber-rattling. Apple could benefit from a small show of independence from China, using it as leverage to remind government officials about the mutual benefits of their stable, codependent relationship. After all, Apple has gotten cheap labor and high-quality production from Chinese workers, while China has reaped hundreds of billions of dollars in economic stimulus from Apple’s presence. China also accounted for $68 billion, or nearly 20%, of Apple’s fiscal 2021 revenue.

Alternatively, the Bloomberg Intelligence report could be a blaring siren about Apple’s overreliance on Chinese supply chains and lack of urgency in diversifying production. In the past eight years alone, the American approach to China has flipped from semi-dovish to moderately hawkish, upsetting a period of relative calm between the two nations. If it doesn’t move swiftly, virtually all of Apple’s production operations could get caught in the messy middle of a fight between the two nations.

Then again, maybe Apple is actually bent on breaking free from China. While Bloomberg Intelligence is pessimistic about Apple’s ability to swiftly sever ties, analysts at J.P. Morgan are more bullish on the prospect. They estimated last week that Apple could produce 25% of its products outside China by 2025, up from 5% today, with India serving as a key outpost.

Or perhaps there’s a kernel of truth in all three scenarios. Apple CEO Tim Cook has been open about his desire to establish multiple production locales, but he’s hardly put China on blast or unveiled grand plans for abandoning the republic. As the New York Times reported earlier this month, Apple has been “careful not to antagonize China’s ruling Communist Party” while executing plans to shift assembly.

Whatever Apple’s intentions, the Bloomberg Intelligence analysis reflects the tech titan’s long road to diversification. Apple spent 20-plus years investing in production in China. It could take just as much time, if not more, to unwind.

Put the résumés away. Meta CEO Mark Zuckerberg told employees Thursday that the company will be instituting a hiring freeze and cutting more costs in the coming months, Bloomberg reported. Zuckerberg’s comments, made during an all-hands meeting, follow attempts by the social media giant to push out lower-performing employees while avoiding layoffs. Meta is looking to trim expenses amid a slowdown in user growth, competition from TikTok, and Apple operating system privacy changes that hinder advertising efforts.

It’s game over. Google is shutting down its cloud gaming platform, Stadia, after a three-year run during which the service failed to gain traction with users, The Verge reported Thursday. The venture faced skepticism from the start, with critics noting that the Alphabet unit lacked significant experience in the gaming sector and faced competition from established industry players. Google officials said the platform will remain online through mid-January 2023.

Blowing up his phone. Newly released text messages Thursday showed some of Elon Musk’s conversations with Twitter leaders, tech billionaires, and media personalities amid his decision to purchase the social media company earlier this year. The messages, which were included as part of an ongoing court case over Musk’s attempt to back out of the $44 billion deal, detail the rapid disintegration of the working relationship between Musk and Twitter CEO Parag Agrawal, who disagreed over potential changes to the platform. Several prominent entrepreneurs, including Oracle cofounder Larry Ellison and FTX founder Sam Bankman-Fried, also volunteered to help Musk’s takeover bid by investing billions of dollars.

Waking up to reality? With the feel-good vibes of last week’s Dreamforce 2022 receding, investors are asking whether the growth party is over for the event’s chief sponsor. Protocol reported Friday that some Wall Street analysts are fretting over Salesforce’s trajectory, questioning whether the enterprise software firm has evolved from a growth giant to a mature entity. The questions coincide with a slowdown in the enterprise software market, as well as a maturation of Salesforce’s signature products.

Wall Street is divided. Some will simply want to see operational improvement and share repurchases. It’s why the announcement of a 25% operating margin goal by 2026 was tepidly embraced on the stock market. Notably, that margin target would be inclusive of any acquisitions, per chief financial officer Amy Weaver. And last August, it issued its first repurchase program.

“Right now Salesforce has been in between growth and value investors,” said Wells Fargo analyst Michael Turrin. “Maybe a more mature Salesforce is surfacing. That maybe means the growth profile is no longer what it was.”

Midterm candidates are embracing TikTok ‘for better or worse.’ For a number of officials, it’s worse, by David Klepper and the Associated Press

The EU is crafting liability laws for A.I. products that cause injuries—here’s why the whole world better pay attention, by Jeremy Kahn

Climate change and the energy crisis have revived the nuclear energy debate. Despite tech and safety advances, it’s as polarizing as ever, by David Meyer

A couple of snipes. One of the tech industry’s most bizarre episodes finally resulted in some prison time Thursday. Two former eBay executives were sentenced to a combined seven years behind bars for their role in a stalking and harassment campaign that involved sending cockroaches, spiders, and threatening messages to publishers of an online newsletter, the Associated Press reported. James Baugh, eBay’s former senior director of safety and security, received a five-year prison sentence for his role in terrorizing a Boston-area couple that covered negative news about the company. David Harville, eBay’s former director of global resiliency, got two years in the federal penitentiary. Prosecutors said Baugh masterminded the scheme, while Harville helped carry out the campaign.