Climate change and the energy crisis have revived the nuclear energy debate. Despite tech and safety advances, it’s as polarizing as ever 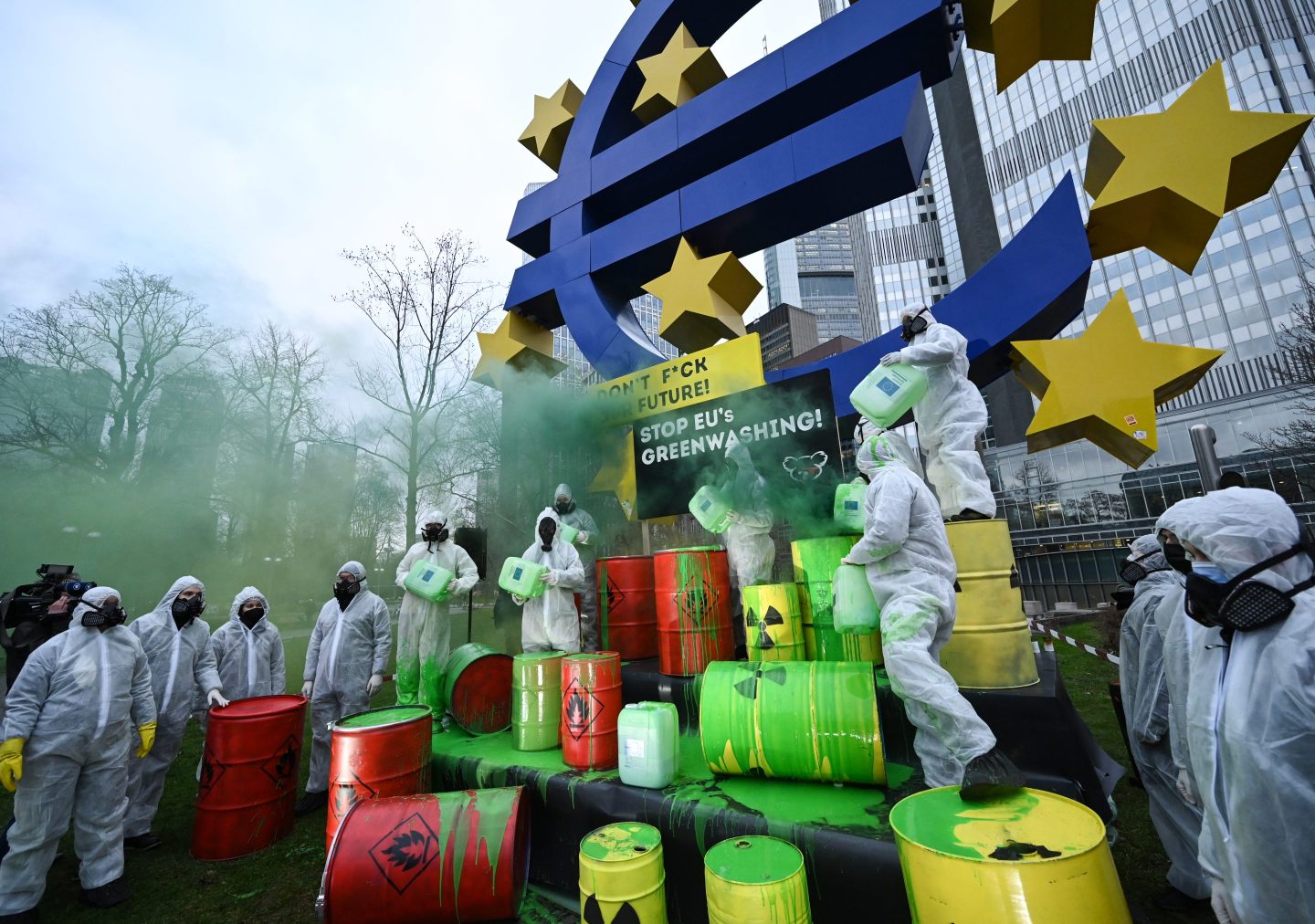 Activists of the "Koala Kollektiv" demonstrate in front of the Euro sculpture in downtown Frankfurt against greenwashing of nuclear energy and natural gas by the taxonomy of the EU.
Arne Dedert—picture alliance via Getty Images

Most people now agree that the future of energy should be green, with carbon-spewing fossil fuels giving way to renewable sources such as wind, solar, and hydro power. But are renewables enough to maintain civilization as we know it? That’s the central question in what is shaping up to be an epic fight over the future of an alternative energy source: nuclear.

Nuclear is back on the agenda in many countries across the world, with the industry touting its potential to address the twin crises that define our time: climate change, which has for decades led some environmentalists to champion nuclear as a cleaner alternative to fossil fuels, and the energy crunch that was sparked by Russia’s invasion of Ukraine and Vladimir Putin’s subsequent decision to strangle natural-gas flows to Europe.

“I think we’re going to go rapidly to nuclear now because of the energy security issue,” said the pro-nuclear British climate writer Mark Lynas. “Climate change wasn’t going to lead to a nuclear renaissance; I think energy security will.”

Read more: How the facts about nuclear energy have changed since you last made up your mind

Nuclear power plants are dirty to build like any large concrete structures, and extracting their fuel isn’t clean either, but many governments like that their operation does not pollute the air, nor does it contribute to global warming. The U.S.’s recently passed climate legislation flung tax credits at the nuclear industry; and, noting a surge in support for nuclear, the International Atomic Energy Agency this week revised its annual nuclear-capacity projections upward for the first time since Japan’s 2011 Fukushima Daiichi disaster.

However, while some environmentalists have accepted nuclear as a “green” power source, many have not. A couple weeks ago, Greenpeace launched legal action against the European Union’s proposed classification of nuclear as a sustainable investment—a decision that would smooth the way for the cheap financing of new plants. South Korea’s proposal last week to make the same classification, with the EU as its inspiration, has also drawn howls of protest.

The stakes could not be higher, not only for a nuclear industry that spies an opportunity for a long-awaited revival, but also for the ability of industrialized societies to keep the lights on as they transition away from fossil fuels.

The public is sharply divided over nuclear. In the U.S., a May Gallup poll found 51% of people were pro-nuclear and 47% opposed. In Germany, an August survey by Civey suggested 52% opposed the construction of new nuclear plants to solve the energy crisis, and 41% supported the idea. In academic and environmentalist circles, the split is proving brutal.

“The community for and against nuclear power is very polarized—more than I’ve ever seen,” said Rodney Ewing, a Stanford University nuclear security professor who has been working in the field for half a century. “People only listen to one another long enough to decide which side you’re on and then dismiss or embrace you accordingly. This is a bad sign, because it means it’s not possible to raise issues without being attacked for being against solving the climate change problem.”

Lynas is deeply familiar with the emotive nature of the debate. In 2005, he converted to the nuclear cause in a New Statesman article that he says generated “a huge outpouring of angst and vitriol from people in the green movement whom I respected and counted as friends.”

“As I gradually came to understand how catastrophic runaway climate change could be, I at the same time came to understand that nuclear was the biggest source of zero-carbon power in the U.K.,” he said. “So why were the greens who say they’re so concerned about climate change trying to shut it down? The more people shouted at me, the more I thought I might be on to something.”

Lynas has since founded an “ecomodernist” organization called RePlanet that is pushing for what he calls a “more pro-science” approach to the energy transition. The way Lynas tells it, much of the environmentalist movement is still stuck in the 1970s, when it was energized by the fight against all things nuclear—both weaponry and energy. “It’s critically important to oppose nuclear weapons proliferation, but to oppose civilian use doesn’t make any rational sense,” he said.

Pro-nuclear protesters take part in demonstrations ahead of a vote at the European Parliament on a motion to block the European Commission’s plans to grant a green label to gas and nuclear investments, in Strasbourg, eastern France, on July 6, 2022.
PATRICK HERTZOG—AFP via Getty Images

It is certainly true that nuclear energy is a lot safer than it used to be, at least on the operational side. Doomed plants like Chernobyl and Fukushima Daiichi belonged to a generation that has since given way to newer, more meltdown-proof designs. On the flip side, there still aren’t any proven sites for the long-term storage of radioactive waste out there, but that situation will likely start to change in the next few years.

Although Lynas said antinuclear activists want to “shut down the existing reactor fleet,” that really depends on who you talk to.

Greenpeace senior nuclear expert Jan Haverkamp, for example, backs Germany’s plan to shutter all its nuclear plants because the money spent on extending their life span would be better spent “pushing forward urgent climate action.” But Tom Burke, a former Friends of the Earth executive director and current chair of the environmental think tank E3G, argues that “it makes sense to run existing nuclear power stations as long as it is safe and economic to do so”—or even uneconomically, in places such as Germany where the alternative is to burn coal and gas until enough renewable energy sources are connected to the grid.

The antinuclear crowd does, however, agree that new nuclear plants are a no-go. And, with safety being less of an emphasis these days, their argument is largely based on economics and—when considering the energy and climate crises—time scales.

Today’s nuclear plants take at least a decade to build, and usually far longer. New designs for small modular reactors—which will be mostly made in factories and assembled on-site—promise to shrink that to five or even four years, but they won’t be around in reality until the end of this decade at the earliest. Meanwhile, wind and solar are being rolled out now; renewables already account for around half of Germany’s energy generation, for example.

“There is nothing that new nuclear can do to deal with this energy security problem, not only because you cannot build any additional nuclear in time to make any difference to the current problem, but you cannot substitute nuclear electricity for gas, much of which is used directly for heat and for chemicals,” said Burke.

“If we were to double nuclear capacity before 2050, we would be able to reduce a bit less than 4% of greenhouse gas emissions,” said Haverkamp. “It delivers too little, and what it could deliver would be delivered far too late.”

However, it isn’t just the nuclear option that involves long timescales and as-yet-unproven technologies—wind and solar plants stop generating power when the wind stops blowing and the sun stops shining.

According to Thomas O’Donnell, an energy expert who teaches at Berlin’s Hertie School of Governance and Free University, current power grids just can’t handle this variability. “In my estimation, almost any country can adopt around 25% variable renewables,” he said. “However, depending on the technological development and wealth of the country and the age of grid, they start coming up against a wall where the old grid simply won’t work, and you have to rebuild the grid.”

Apart from sniping that nuclear output is also not always assured—witness France having to shut down half its nuclear fleet this summer due to widespread corrosion problems—antinuclear advocates say all-renewables grids will become possible with the development of distributed storage technologies. These would include batteries for short-term storage, plus facilities that would use surplus energy to harvest “green hydrogen” from water, effectively allowing for the longer-term storage of that energy in an environmentally-friendly fuel that could be burned in a converted natural-gas power plant to ensure grid stability.

Smarter controls based on sensors and data management technologies would also be needed. “There’s so much more you can do now to match supply and demand,” said Burke. “Digitization is what is really killing nuclear.”

Nuclear advocates like O’Donnell argue it’s far simpler to just replace coal plants with nuclear plants that don’t require massive grid overhauls. Their opponents point out that power grids need to be refreshed at some point anyway. “As the grid needs to be constantly updated, we need to make sure that we set the right priorities now,” said Gerd Rosenkranz, an adviser to the antinuclear German climate policy think tank Agora Energiewende.

Stanford’s Ewing warns it would be “a mistake” to roll out new reactors before getting a grip on the long-term storage of radioactive waste. But even if that’s solved, he says, the nuclear industry has a long way to go with making its case for large-scale new buildouts.

“Nuclear could be the right answer, but it’s only the right answer if you can go down the checklist of accidents, transport, cost, timeliness, proliferation, and you have answers,” Ewing said. “If it’s not based on solid answers to the list of reasonable questions, then we can look forward to trouble down the road.”