Safety, waste storage, and promising tech: How the facts about nuclear energy have changed since you last made up your mind 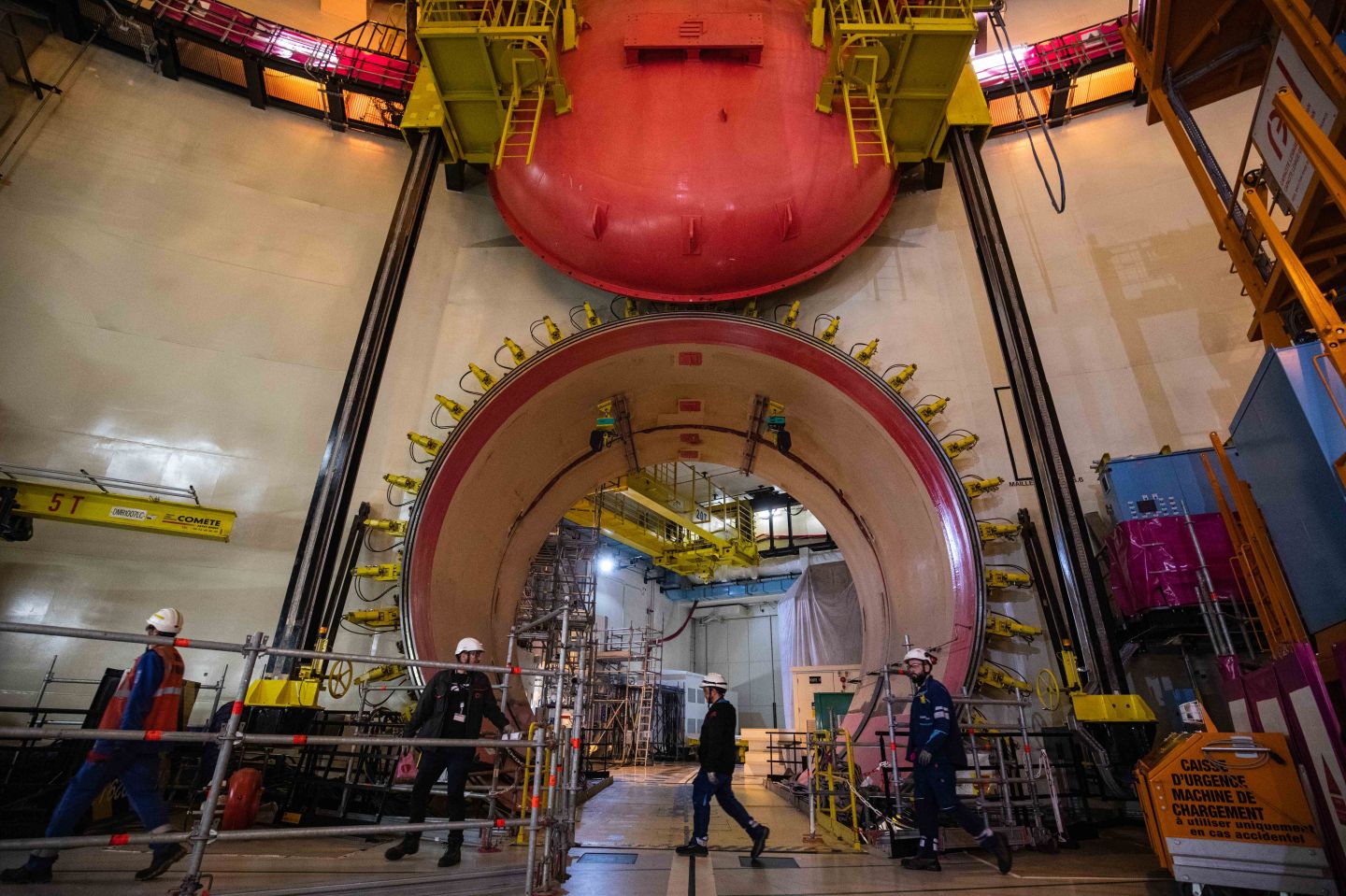 One of the most polarizing debates is back on the agenda: nuclear power, and whether it’s a good or bad idea to build new plants.

You might have made up your mind about nuclear energy a long time ago. If you’re against it, that’s probably got a lot to do with safety issues. But the twin emergencies of climate change and the energy crisis are forcing the world to reappraise the technology, so it’s worth examining the current state of the art.

Here’s a rundown of where nuclear-power technology is at these days, in terms of the safety of the power stations themselves, and the ongoing quest to find a permanent home for their radioactive waste.

If the words “nuclear energy” make you think of the 1986 Chernobyl disaster in Ukraine and the 2011 Fukushima Daiichi disaster in Japan, then you’re thinking about so-called Generation II reactors. And they’re definitely worth considering, as this generation—built between the mid-1960s and the end of the last century—accounts for the vast majority of the 440-ish nuclear reactors out there.

More than two-thirds of these reactors are either nearing or have reached the end of their original 40-year life span. Many have been or can be extended for another 20 years or so, by undergoing a major overhaul. But while Generation II reactors will continue to dominate the nuclear landscape for the foreseeable future, they’re not what’s being built these days—those are Generation III or III+ designs.

Members of South Korean environmental activist groups prepare for an antinuclear protest in Seoul to mark the 10th anniversary of the Fukushima Daiichi nuclear disaster on March 11, 2021.
Chung Sung-Jun—Getty Images

The first Generation III reactors went into service in Japan in the late 1990s. Like their predecessors, these are light water reactors that use regular water to cool down the plant’s systems and slow down neutrons to enable the fission chain reaction. However, Generation III reactors are intended to last longer—60 years, extendable to a full century—and to make meltdowns far less likely.

Then we have Generation III+ reactors, the first handful of which went online in Russia, India, and China over the past half-decade. These are supposed to be even safer, thanks to passive safety features that should automatically avoid accidents if something malfunctions, without the need for human intervention.

For example, the operators of a Generation II reactor might respond to an emergency by pumping in water to actively cool the fuel—whereas with some newer designs, the opening of a fail-safe valve would flood the reactor with cooling water, using gravity instead of electric pumps. That would have come in handy at Fukushima Daiichi, where a massive tsunami strike made it impossible to power those pumps and prevent meltdown.

“It should be so you can walk away and it doesn’t take any active intervention for the plant to cool down. After some days, someone has to bring water, but in most designs it’s a minimal level of water,” said energy expert Thomas O’Donnell, who teaches at Berlin’s Hertie School of Governance and Free University. “A lot of [Generation III+ reactors] have a new fuel design where the fuel is encased in small ceramic balls and it’s actually not possible for the fuel to get so hot as to destroy the encasement, so it really can’t melt down.”

Even in antinuclear environmentalist circles, there is broad recognition that today’s nuclear-reactor designs avoid the dangers that manifested at Chernobyl and Fukushima. “Those issues have been addressed to a certain extent,” said Jan Haverkamp, a senior nuclear energy expert at Greenpeace. However, he added, this latest generation comes burdened with “a heavy increase in complexity, and with that a heavy increase in cost.”

Indeed, a quarter-century after they were introduced, just seven Generation III reactors are operational. Consider for example the European Pressurized Reactor (EPR) design that was developed by the French energy giant EDF. Two of these reactors went online in China in 2018 and 2019, but major projects in Europe have experienced enormous delays and cost overruns, and are still not operational.

In Finland, the new EPR reactor in Unit 3 of the Olkiluoto plant began construction in 2005 and was supposed to begin commercial operations in 2009. It finally started up in March of this year, only to shut down in May for repairs. When it goes back online in December, it will be 13 years late, with a cost more than double the original estimate of €3.7 billion. Meanwhile, the Flamanville 3 EPR reactor in France was supposed to go live in 2012 at a cost of €3.3 billion, but is now scheduled to become operational in 2024, with the price tag having ballooned to €12.7 billion.

For Haverkamp, all this adds up to “a hell of a way of boiling water.” But, while reactor safety issues seem to have been solved, he is still deeply concerned about the question of nuclear waste.

Nuclear power plants create radioactive waste—much of this is spent fuel, and some comprises the radioactive components taken away from a decommissioned plant. Given that this waste can remain lethally dangerous to people for at least 250,000 years, it has to be securely dealt with.

Nuclear energy advocates tend not to see the issue as cause for concern. Mark Lynas, a climate activist who horrified many of his contemporaries by becoming a nuclear backer in the mid-2000s, told Fortune the industry “doesn’t like to talk about [waste], because it triggers people. It’s a psychological issue rather than an engineering one…It’s a nonissue environmentally.” So safe are modern nuclear waste canisters, he argued, that he even hugged one a couple months ago when visiting a storage facility.

However, those canisters still need to go somewhere where they can safely sit for hundreds of thousands of years, and the fact remains that the long-term disposal of nuclear power waste is not yet a thing. There’s a quarter-million metric tons of the stuff that have already been generated and are now mostly sitting at the plants that spat them out (there are 75 such sites in the U.S. alone), with no permanent home to go to.

Many industry eyes are currently trained on Finland, where a new long-term repository called Onkalo is being built 1,700 feet underground in the granite near the Olkiluoto nuclear plant. Onkalo should be able to accept a century’s worth of spent fuel from the power station after it becomes operational in 2024—a go-live date that should make it the world’s first example of permanent nuclear waste disposal. Meanwhile, scientists in France, Belgium, and Switzerland are looking at burying waste in clay-based rather than crystalline rock, as that’s what they have to work with.

However, even if these projects pan out, each repository will require extensive evaluation in the context of the local geology. According to Rodney Ewing, a nuclear security professor at Stanford University’s Center for International Security and Cooperation, it could take as much as 40 years for a repository to advance from conception to taking in waste, because of social as well as technical issues. For one, people need to be convinced that it’s acceptable to store radioactive waste in their neighborhood.

The nuclear industry may see long-term storage as a done deal, but governments are well aware how complicated the process will be. The Dutch government, for example, has kicked its decision about final disposal all the way out to the year 2100. Even the U.S. currently has no permanent-disposal program. “If the U.S. wants to have a repository, then we need an institution that has a job and responsibility [for addressing the issue], and we need to get on with it, because it’s going to take decades,” said Ewing.

So that’s the current situation. But what about the new ideas that the nuclear industry is formulating for the coming decades?

One partial solution to the waste problem may lie in the planned Generation IV of nuclear reactors, which remains at least a couple decades away from reality. These reactors would theoretically use substances such as liquid sodium for cooling, rather than water. Most tantalizingly, they would run on reprocessed spent fuel.

“Industry has not said its last word in terms of having some new generation of reactor that could burn what is currently considered as waste,” said Yves Desbazeille, director general of Brussels-based lobbying group Nuclear Europe. “You can basically run Europe for centuries using existing stockpiles of depleted uranium,” said Lynas.

Greenpeace’s Haverkamp is a lot less enthusiastic. “Basically all of the viable Generation IV reactors I’ve looked into over the past 20 to 30 years are proliferation nightmares,” he said. “The technology you need to harvest material you could use for nuclear bombs. The chance anybody wanting to enter the space of nuclear weapons increases a lot.”

Ewing is also skeptical, because the reprocessing is designed to reclaim usable uranium and plutonium, but those aren’t the most problematic elements from a waste disposal point of view; he’s far more worried about other long-lived elements that are created by the fission process. “It doesn’t solve the waste problem,” he said.

Apart from Generation IV reactors, the other big hope—and one that could be a lot closer to being realized—is that of small modular reactors (SMRs) involving factory-made modular components that can be assembled on-site, which should heavily reduce construction times and costs. The British engineering giant Rolls-Royce claims the manufacturing and assembly of one of its SMRs, which it wants to launch by the end of this decade, would take a mere five years. NuScale, an American rival, told Fortune it intends to start building one of its Voygr SMR plants in Utah in 2026, with the plant also going live by the end of the decade.

As always, there may be a catch.

In May, Ewing and some colleagues published a paper that suggested SMR designs will produce more—and more radioactive—waste than today’s light water reactors. NuScale, which was one of the companies whose designs were studied in the paper, reacted furiously to what it claimed were inaccuracies.

“The paper relies on outdated design information for the energy capacity of the NuScale fuel design and wrong assumptions for the material used in the reactor reflector as well as the burnup of the fuel. With the correct inputs, NuScale’s design compares favorably with current large pressurized water reactors on spent fuel waste created per unit of energy. These inputs are publicly available to the paper’s authors and their omission undermines the credibility of the paper and its conclusions,” the company said in a statement.

“The paper was very thorough,” said Lindsay Krall, the lead author. “As yet, nobody has presented evidence to disprove that statement that SMRs will produce more waste per unit of energy.”