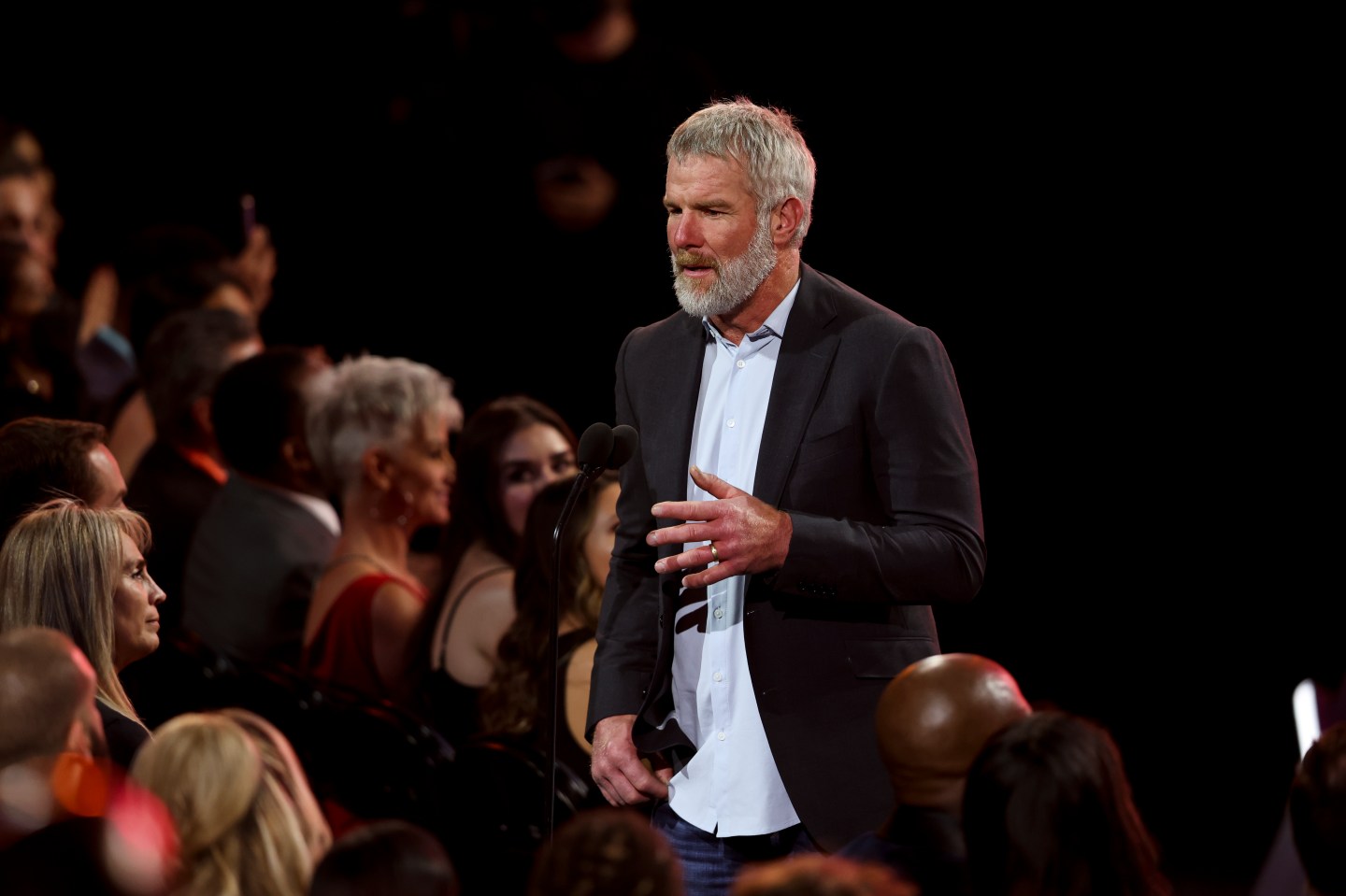 Brett Favre is now the face of the biggest welfare scandal in years, and truth probably would have remained in the dark if not for a local Mississippi reporter.
Michael Owens—Getty Images

It’s been a long time coming, but it looks like the Mississippi welfare scandal is getting the attention it deserves.

Former NFL star Brett Favre, along with a laundry list of officials, including Mississippi former governor Phil Bryant, are all players in a still-unfolding scandal that involves the misallocation of millions of dollars in state and federal funds that were intended to help the poorest families in the state.

Prosecutors have been racking up arrests and indictments as details emerge; most recently, the former executive director of the Mississippi Department of Human Services pleaded guilty to two federal charges and 18 state counts of embezzling federal welfare funds.

Favre, who is emerging as a central figure in the scandal, appears to have worked behind the scenes to funnel millions of dollars to pet projects, including a volleyball arena for his alma mater.

The story is complex and still unraveling, so let’s narrow our gaze a bit.

It’s already clear that it is one of the biggest public corruption scandals in modern memory, one which has already impacted the lives of underserved Mississippians for years. The impact must be assessed if justice is to be served.

Next, the media has been woefully late to hold Favre to account. Sportscaster Shannon Sharpe touched on the reasons why on his Undisputed show, citing the litany of misdeeds Favre had already been accused of that would have been a legacy-ender if he had been anyone else, specifically a Black player. His alleged crimes also impact primarily Black communities. “Mississippi is the poorest state in our country…You made a hundred million plus dollars in the NFL…and he stole money from people who needed that money!”

If you can tear yourself away from the high-octane drubbing Favre is getting in the sports media world, I recommend you spend some time listening to a local reporter who represents the best of what the industry can be.

We know what was going on in Mississippi because of a nonprofit news organization called Mississippi Today. Anna Wolfe, an investigative journalist, is the face of this work.

Wolfe joined the Dan Le Batard Show to share behind-the-scenes details about the nearly two-year slog to nail down this story. It is a master class in skill, dedication, and public service journalism. (Thanks to longtime raceAhead reader Tony Samuels for flagging the video.)

Wolfe’s first piece, published in 2020, showed that Favre had introduced state welfare officials to the founder of a pharmaceutical company called Prevacus, which was developing a drug to treat concussions, and for which Favre was also an investor and public booster. The head of the Mississippi Community Education Center, Nancy New, along with her son Zach, allegedly transferred $2.15 million from a federal grant program called Temporary Assistance for Needy Families (TANF) into personal investments in Prevacus. The scheme, which had been under investigation by state authorities since June 2019, resulted in six arrests. “There was fraud at the heart of this,” the state’s auditor told her.

Because Favre was encouraging his hangers-on to invest in Prevacus, Wolfe continued to follow the money at TANF, eventually “realizing that this five million that went to build a volleyball stadium at University of Southern Mississippi was also a project that Favre was pushing.” It was almost like he was treating the funds as his own personal checkbook. “[T]hat informed how our welfare program was operating, that someone like Brett Favre could come in and have so much influence on how the money was spent.”

Not on the nearly 20% of the population who are living in poverty—mostly Black, Latinx, and Native American—and nearly 30% of children.

Wolfe also cited some bombshell reporting that went mostly unnoticed. Here’s a doozy: Last April she reported that newly discovered text messages between Favre and then Governor Bryant showed that the former NFL’er knew that the state had been funneling money to Prevacus. Then, he offered Bryant stock in the company two days after he left office “…for all your help…We want and need you on our team!!!”

She talks about the runaround and delaying tactics she received from state officials who refused to provide expenditure reports, attempted to charge her thousands of dollars for a public records search, and the big lie Favre told her by text message. (That’s around the 11:00 mark.) “I could never actually talk to another human, so I was just sending email after email- ‘please just tell me how you’re spending this money, I just want to know that it’s helping people,’” she says.

Wolfe, who formerly covered health care for the statewide newspaper, is the kind of reporter people don’t think exists anymore. “I never really thought the stories I told were going to be very sexy or very well read,” she says. “I was just passionate about getting to the heart of the issue of poverty in Mississippi.”

Wolfe has already laid the groundwork for better policies, oversight, and accountability in Mississippi and across the country, and that’s great news for the families who desperately need the services they’ve been denied.

But in a better world, similarly intrepid reporters would be dispatched to ask their own state officials for expenditure records from poverty-alleviation funds across the country, and empowered—i.e. paid—to provide the essential context to help explain why poverty isn’t improving. (I mean, we know, but the history always illuminates.) Local newsrooms, inextricably tied to the communities they serve, might be the last available backstop against the greed, cronyism, self-serving revisionism, institutionalized racism, and political shenanigans that drive inequality. We need them on the job.

May a better world be at hand.

The feds demand action on the water crisis in Jackson, Mississippi The Department of Justice has stepped in, threatening legal action if city officials don’t agree to negotiations to fix the water system, saying “an imminent and substantial endangerment to human health exists.” “The people of Jackson, Mississippi, have lacked access to safe and reliable water for decades,” Michael Regan, the administrator of the Environmental Protection Agency, said in a news release. “After years of neglect, Jackson’s water system finally reached a breaking point this summer, leaving tens of thousands of people without any running water for weeks. These conditions are unacceptable in the United States of America.” Political insiders say mismanagement also occurred at the state level, blaming Gov. Tate Reeves for blocking key infrastructure bond votes for Jackson as a member of the state’s bond commission.
NBC News

A new grant to preserve Black modernist architecture The Getty Foundation and the National Trust for Historic Preservation’s African American Cultural Heritage Action Fund have announced a $3.1 million grant to preserve the work of Black Modernist architects and designers that might otherwise be lost to time and neglect. The fund, Conserving Black Modernism, also functions as a necessary corrective to the Getty Foundation’s Keeping It Modern initiative, which awarded 77 grants totaling $11.8 million between 2014-2020; none of the U.S.-based grantees were Black. “We’ve heard the increasing calls in recent years to rethink and expand the story of modern architecture in the United States and do a better job of recognizing Black architects and designers,” says Joan Weinstein, director of the Getty Foundation.” Read more on why it matters.
Getty

Saying the name of every Japanese American incarcerated during WWII I’m a bit embarrassed to say that I had assumed we already knew all the names, so I stand corrected. As it turns out, previous attempts to honor the victims relied on wildly inaccurate government records. To address the painful erasure, Duncan Ryuken Williams, director of USC’s Shinso Ito Center for Japanese Religions and Culture, lead a team of volunteers and scholars to create a master list of 125,284 names, meticulously culled from records associated with 75 different incarceration sites. The “names monument” is a hand-bound volume that is currently on display at the Japanese American National Museum in Los Angeles, where it can be viewed for the coming year. “Merging everybody into this kind of enemy group is something we’re trying to repair,” Williams said. “What we want is people acknowledging this history as a way of giving people back their individuality and personhood and their names.”
LAist

"Less than 1 percent of families in Mississippi receive TANF that are eligible, and that is because for years, families have found it to be an inhumane process that is just not worth it. They make it so incredibly difficult for families that need these resources to get it. But then others who don’t need it can just send a text message, and money magically appears in their bank account.”

—Aisha Nyandoro, chief executive of Springboard To Opportunities, a Mississippi-based nonprofit that works with under-resourced families.