Apple’s iPhone 14 Pro is a huge hit. But what’s really propelling its success? 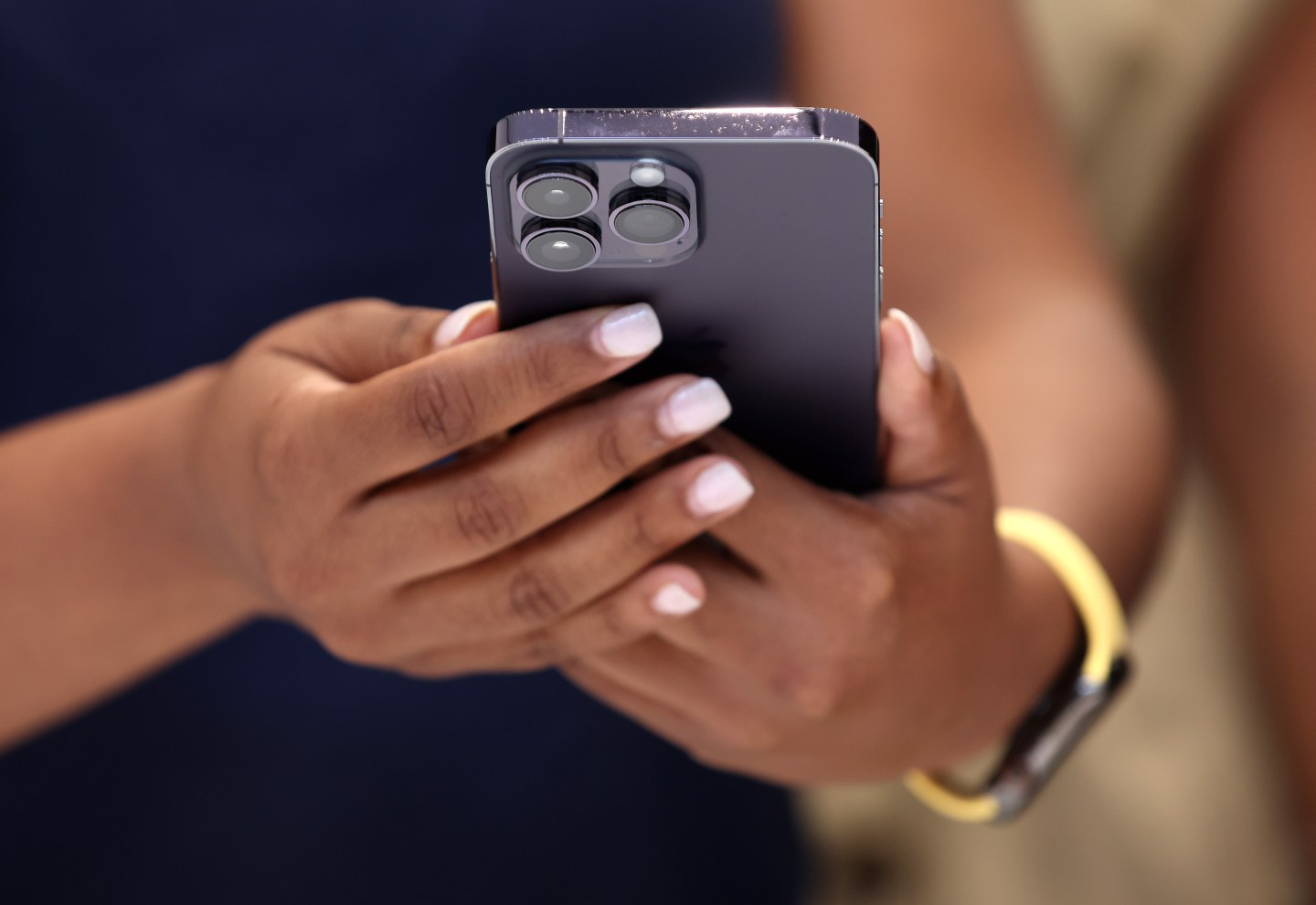 With regard to the latest line of iPhones, it’s clear that global consumers are pro-Pro.

As the Apple iPhone 14 flies off the proverbial shelves following its mid-September release, multiple data points show that buyers are gravitating toward the more-expensive Pro ($999 in the U.S.) and Pro Max ($1,099) versions of the smartphone, shunning a base model ($899) that’s been widely panned as uninspiring.

In a research note last week, Evercore ISI analyst Amit Daryanani estimated that about 56% of iPhone 14 buyers planned to purchase a Pro or Pro Max model, up from 41% during last year’s rollout of the iPhone 13.

The projection mirrored one from TF International Securities analyst and Apple guru Ming-Chi Kuo, who predicted that iPhone 14 Pro models will account for 60-65% of the line’s shipments in the second half of 2022.

The Financial Times also reported Monday that Counterpoint Research forecasts the average selling price of an iPhone will hit $944 in the fourth quarter of 2022, up from $873 during the same period last year, because of customers opting for the Pro model. Prices for the iPhone 13 and 14 series were essentially unchanged at the time of their respective releases.

The preference for the higher-priced Pro is undoubtedly a win for Apple, provided that unit sales remain consistent. Multiple analysts expect Apple will move a similar number of new iPhones in the latter half of 2022 when compared to the prior year—and might even exceed that total.

What exactly that means long-term for Apple, however, is a bit convoluted.

Conventional wisdom would suggest that Apple is discovering the iPhone’s price elasticity is even better than originally thought.

Despite generationally high inflation and a general economic malaise, iPhone buyers are showing they’re willing to pony up if they see better value in an Apple smartphone. The iPhone 14 Pro contains several added features that aren’t in the base model, including the Dynamic Island module, an always-on screen, and a better camera. The base model, meanwhile, received minimal upgrades over last year’s iteration.

But there are other confounding factors that might be contributing to demand for the Pro version, making it difficult to draw lessons from its apparent success.

AT&T, Verizon, and T-Mobile have been particularly aggressive this year in offering trade-in deals for the iPhone 14, allowing customers to get an iPhone 14 Pro or Pro Max for minimal money. In some cases, customers can get the top-of-the-line phones for free, provided they have the right trade-in and sign up for specific wireless plans.

The competitive trade-in offerings are designed to lock customers into each wireless provider’s new 5G network, which cost those companies massive sums of money to set up.

“The aggregate promotions are a significant positive for Apple,” Daryanani said in a client note last week, according to Investor’s Business Daily. “These actions act as an underappreciated lever that could ease price points for consumers and support a strong iPhone cycle.”

Apple also might be hitting customers at just the right time in their smartphone renewal cycle, providing a slightly artificial boost to the iPhone 14 line.

Wedbush Securities analyst Dan Ives estimates that about 240 million out of the 1 billion iPhones in circulation are at least 3 ½ years old, as customers hang on to their devices longer. With wireless carriers offering deep discounts on iPhones, consumers clinging to their aging hardware might be using the iPhone 14 as an opportunity to upgrade on the cheap.

Even if the iPhone 14 Pro’s success is truly rooted in a willingness to splurge on $1,000 phones, Apple’s runway for building on this triumph could be short. As Bloomberg reported in March, Apple is working on a hardware subscription service that would treat iPhones more like a leased device, rather than a purchased product. The approach likely would involve Apple bundling new iPhones with some of subscription services, such as Apple Music, Apple Fitness+, and iCloud+.

For Apple, there’s no real downside to millions of customers increasingly opting for a higher-priced product. It’s just too early to conclude whether the iPhone 14 Pro’s prosperity is a phenomenon, a product of circumstances, or a prevailing trend.

Hashing out a deal. TikTok parent ByteDance and the Biden administration are working toward an agreement that would alleviate some of the U.S. government’s national security concerns related to the app, the New York Times reported Monday, citing four sources with knowledge of the negotiations. An early framework of the deal would address storage of TikTok’s American data, monitoring of TikTok algorithms, and the appointment of security experts who oversee the app’s operations. ByteDance would not be required to sell TikTok as part of the agreement.

Can’t wait for Black Friday. Amazon will host a second Prime Day-like event in mid-October as the tech giant attempts to boost sagging e-commerce sales weighed down by inflation, The Associated Press reported Monday. The “Prime Early Access Sale” will be held Oct. 11-12, with Prime members receiving sharp discounts ahead of the traditional holiday shopping season. Amazon has never hosted a second Prime Day-type sale in its history.

He’s officially ‘wanted.’ South Korean authorities said Interpol is seeking the arrest of TerraForm Labs co-founder Do Kwon on charges related to a $60 billion collapse of two cryptocurrencies, Bloomberg reported Monday. Prosecutors in South Korea have accused Kwon of six crimes tied to TerraForm Labs’ TerraUSD and Luna tokens, which crumbled in May amid a sharp drop in digital asset values. Kwon has said that he is cooperating with authorities, but prosecutors in Seoul have disputed that claim.

A beam of hope? SpaceX CEO Elon Musk said his company is activating its Starlink satellite internet service in Iran, where the government has cut off internet access amid large anti-government protests, after receiving an exemption to federal sanctions restrictions from the U.S. Treasury. It is not clear how many Iranians might gain internet access within the Islamic republic, given that Starlink users must have satellite hardware to receive service. Protesters in Iran have taken to the streets since Sept. 16 following the death of a 22-year-old woman, Mahsa Amini, while in the custody of the republic’s “morality police.”

Making a bundle. If you’re looking for a pure distillation of corporate synergy, the Pan-Amazon team might be it. As The Information reported Monday, the little-discussed Amazon unit is responsible for getting high-value business customers to spend across multiple departments, including web services, advertising, and logistics. While Amazon has released few details about the team, available evidence gathered by The Information suggests Pan-Amazon has struck wide-ranging deals with Boeing, Comcast, and Peloton, among others. The bundled services help keep corporate customers in the Amazon family, though such agreements could run the risk of antagonizing antitrust regulators.

Started several years ago under former [Amazon Web Services] Senior Vice President Andy Jassy, who succeeded Jeff Bezos as CEO of Amazon last year, the Pan-Amazon team coordinates meetings between executives from AWS, various parts of Amazon including retail, entertainment and logistics, and AWS customers. The goal of the group is to boost sales and retention by keeping customers engaged in the Amazon product ecosystem. A person close to AWS said the Pan-Amazon team exists because customers have shown an interest in forming strategic partnerships “across all of Amazon’s businesses."

These deals have become more important lately as growth in Amazon’s core retail business has hit a wall. The Pan-Amazon team is helping leaders in charge of fledgling Amazon products gain access to key AWS customers they don’t typically talk to.

New York is now the center of crypto, by Jeff John Roberts

Salesforce revived San Francisco’s downtown for a week, but the company’s own return-to-office plans lingered awkwardly, by Kylie Robison

A.I. is not sentient–but we should treat it as such, by Treveni Gandhi

An uncertain economy threatens startups–but caution and pessimism have no place in the tech industry, by Gary Shapiro

A not-so-dark side of A.I. Star Wars fans might get to hear James Earl Jones’ iconic basso profondo for generations to come. Vanity Fair reported that the 91-year-old actor has authorized Lucasfilm to employ A.I. technology to recreate his Darth Vader voice for use in future Star Wars properties. Lucasfilm has previously worked with a Ukrainian company, Respeecher, to generate voices used in The Mandalorian and The Book of Boba Fett through A.I. and machine learning tools. Disney has spun off several movies and television series tied to the Star Wars franchise since acquiring Lucasfilm in 2021 for $4 billion. Jones reportedly wanted to keep the Darth Vader voice alive past his retirement and death, ultimately signing off on a deal after hearing Respeecher’s work.