Salesforce revived San Francisco’s downtown for a week, but the company’s own return-to-office plans lingered awkwardly 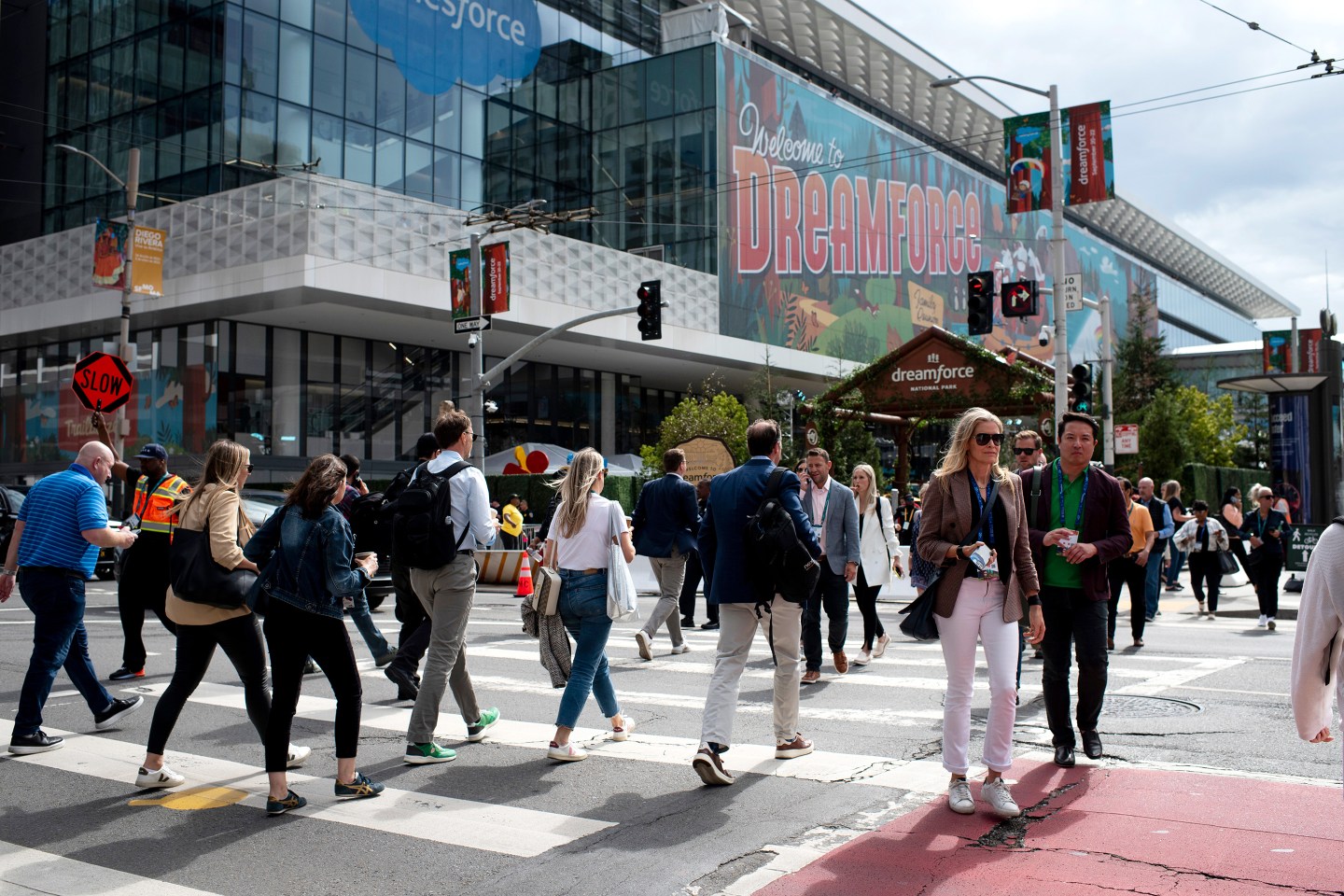 As Salesforce’s twin CEOs Marc Benioff and Bret Taylor took the stage at the Dreamforce conference, enormous screens around the room displayed a slide titled “The Great Reunion,” next to some of the company’s ornate characters celebrating with a Salesforce-themed cake.

The weeklong celebration that Salesforce put on in downtown San Francisco was a welcome event in a city hit hard by the pandemic, with office vacancy rates among the worst in the nation. As thousands of conference attendees swarmed the streets and jostled to get into restaurants, it felt like San Francisco’s business district was getting its groove back.

“40K attendees on site. Every hotel & restaurant was sold out. $40M was invested in the downtown economy. Everyone commented on the beauty of our city,” Benioff tweeted on Friday.

And yet the back-to-normal buzz that Salesforce worked so hard to generate was tinged with a streak of disquiet about the company’s own return-to-work plans. Salesforce Tower, the 61-story company headquarters that looms over San Francisco and ranks as the tallest building in the skyline, is currently about two-thirds leased. And Salesforce, the city’s largest private employer, has not been entirely clear about whether its workforce will remain scattered and remote, or will soon be commuting downtown again.

Throughout the conference, Salesforce executives seemed to offer mixed messages when the subject came to their views on in-office work.

Stewart Butterfield, the CEO of Salesforce-owned Slack, said he would “never” commute to the office five days a week, during a panel at the conference with tech journalist Kara Swisher. In a subsequent interview with Yahoo News, Butterfield noted the importance of employees getting together in a physical space for at least some portion of time — “maybe it’s once a year, maybe it’s every other week,” depending on the company, he said.

Salesforce’s Australia and New Zealand CEO Pip Marlow raised eyebrows among employees in her region of the world when she told reporters at the conference that the company wanted to reduce its remote work contacts to improve employee retention.

“If you join our company and you have only ever worked from home and not from the office, there’s a high likelihood that you would be more likely to go,” Marlow told The Australian on Wednesday.

Asked about Salesforce’s plans for its nearly 80,000 employees to return to in-office work, and for bringing San Francisco employees back to Salesforce Tower in particular, a company spokesperson declined to comment and pointed Fortune toward a recent blog post that said the company “has never had office mandates, and never will.”

Salesforce has a long-standing practice of letting employees choose where they want to work, and co-CEO Taylor said in May that top talent may work from anywhere as long as the time zone aligns with their team.

But the details about how Salesforce’s “no-mandates” comments translate to the situation in its physical offices is important to more than just the company’s employees. Among the attendees at the Dreamforce conference was San Francisco Mayor London Breed. The mayor praised Salesforce in a video she tweeted on Tuesday, describing the company as a “great corporate partner” for more than two decades and touting the importance of conferences like Dreamforce to the city’s pandemic recovery.

In March, Breed launched “Welcome Back to SF,” a program to revive in-office work in the city. The program set requirements for city and county workers to report to work in person based on mixed schedules, and garnered pledges of support from numerous private employers including Gap, Wells Fargo, and Salesforce, according to the SF Standard.

San Francisco’s economic health is heavily tied to its business district, which accounts for 70% of the city’s sales tax revenue and 40% of the city’s jobs, according to the SF Standard.

Last year, the city lost $400 million in tax revenue because of the pandemic, according to a CNBC report that cited the San Francisco Controller’s office.

Mayor of San Francisco London Breed was in attendance at Dreamforce 2022, which is the biggest conference in San Francisco since the pandemic started.
Marlena Sloss—Bloomberg/Getty Images

As part of the city’s “Welcome Back to SF” pledge earlier this year, a Salesforce executive promised that thousands of the company’s employees would soon be back at Salesforce Tower. But it’s unclear how many Salesforce employees are working in the tower, or when they might be. In July the San Francisco Business Times reported that Salesforce was putting roughly half of the office space in another one of its San Francisco buildings up for lease.

It’s no secret that return-to-work mandates have not gone over well with employees at many companies. For instance, a group of Apple employees banded together last month to push back on a new mandate that would require them to come to the office 3-days a week. That’s a reality that Salesforce co-CEO Taylor acknowledged at the Dreamforce conference.

“You see a lot of CEOs come out and say, ‘Everyone’s going to return to the office!’ and there’s civil disobedience. People are like, ‘I’m not going to come. What are you going to do about it,” Taylor said, according to Diginomica.

Of course the unpredictable, ever changing nature of the COVID-19 pandemic has left countless companies’ return-to-work plans in shreds. Salesforce, like many companies, may be wary of making big plans that could still need to be changed.

At this year’s Dreamforce, Salesforce’s 20th edition of the annual event, the company exalted about bringing the Salesforce “family” back together. For the first time since the pandemic, Salesforce welcomed customers, partners, and other attendees without testing or vaccination requirements if they traveled domestically. When Taylor asked the audience at the main keynote how many people had traveled internationally to get there, hands shot up all around the room.

But the company’s own ambivalence about the current state of affairs was on display at the very top of the organization. On stage at the opening keynote, Benioff referenced President Joe Biden’s recent comments declaring the end of the COVID-19 health crisis.

“I heard something like the President said the pandemic is over, right?” Benioff said.

His co-CEO, standing next to Benioff, gave an awkward chuckle. “You may be right,” Taylor said, before adding “But we’re living, right? We’re living with it!”

When Salesforce posted a video of the main keynote to its website later in the week, Benioff and Taylor’s banter about the pandemic was missing. The comments appeared to have been edited out by the company.