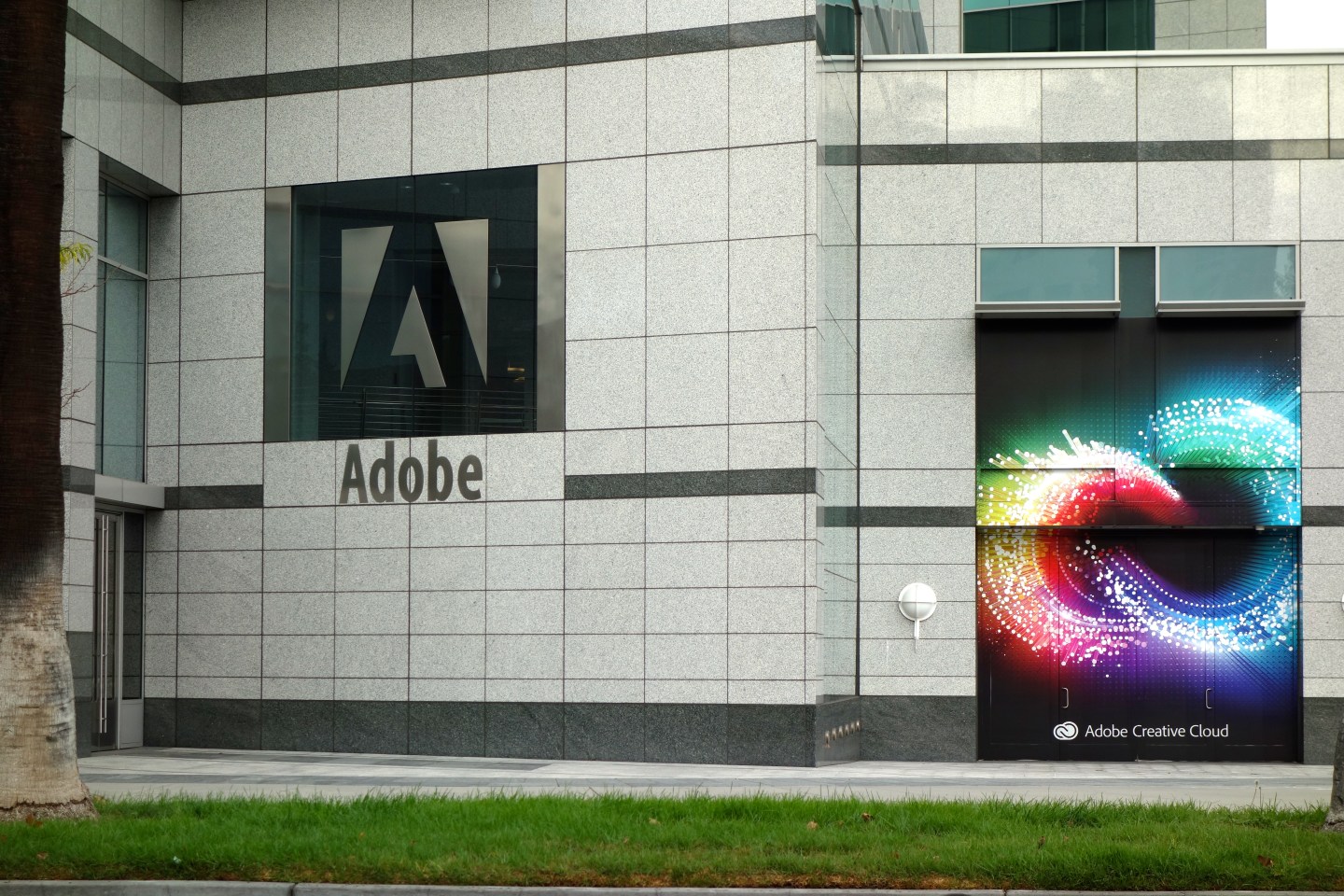 Lisa Werner for Getty Images
"This is going to be an incredible value and a way to attract a whole bunch of new customers to the combined platform," Adobe CEO Shantanu Narayen said.

Adobe is taking a big digital leap with a hefty price tag.

The tech giant has entered into a definitive merger agreement to acquire Figma, a web-first collaborative design platform—and an Adobe competitor—for approximately $20 billion.

Figma, founded in 2012, is a design application tool you can use to create websites, apps, or even logos. It also allows real-time sharing on the same file, which users can open in their browers. In Adobe Photoshop, for example, in order for designers to share their work, they’d have to send the image file through email. And collaborators can’t work in the file at the same time. With Figma, Adobe will be able to tap into collaboration tools, which has become a standard in the current remote and hybrid work environments.

“When we think about the future of what’s happening with creativity, and in a sense, what’s going to happen as it relates to multiple people engaging in that with respect to collaboration, we just believe that this is going to be an incredible value and a way to attract a whole bunch of new customers to the combined platform,” Adobe CEO Shantanu Narayen said during the company’s quarterly earnings call on Thursday.

The transaction, which is the company’s largest acquisition, is expected to close in 2023, pending regulatory approvals, Adobe CFO Dan Durn said. The $20 billion would be paid in cash and stock, “and if necessary, a term loan, to be paid down from our operating cash flows following the closing,” he said.

The company announced about 6 million additional restricted stock units would be granted to Figma’s CEO and employees that will vest over four years after closing. According to Cruchbase, to date, Figma has raised $333 million in venture funding, and in its last funding round in June 2021 secured a $10 billion valuation. So, the deal would be a huge financial gain for the startup.

However, following Adobe’s announcement, its shares dropped about 17%. And there was some skepticism from analysts during the earnings call. “Shantanu, everyone’s admired your ability to stay disciplined on M&A over the last decade, and I guess many are kind of feeling like you broke the mold on this,” Brent Thill of Jefferies said to Narayen. “So what was it that was so special?”

“We do believe that it will be value generating for the Adobe shareholders,” Narayen said.

Adobe’s businesses include Creative Cloud (software for design), Experience Cloud (the interface between a company and its customers on the digital channel), and Document Cloud (PDFs, digital documents). Figma’s technology platform will “accelerate our R&D roadmap, including the delivery of our Creative Cloud technologies on the web, which will allow Adobe to focus and manage our future R&D investments,” Durn said on the call.

Figma’s products “address a $16.5 billion market opportunity,” and this year, they’re expected to add $200 million in net new ARR [annual recurring revenue], surpassing $400 million in total ARR by the end of the year,” Durn said. The acquisition is “primarily about creating new markets, expanding adjacent opportunities, and accelerating growth,” he said. “In years one and two after the closing, the transaction will be dilutive to Adobe’s Non-GAAP EPS, and we expect it to break even in year three and accretive at the end of year three,” Durn said.

“Three years to break even sounds like there are some conservative assumptions built in especially because Figma is generating cash,” Kash Rangan, a Goldman Sachs analyst, said on the call.

“This deal’s about growth is about positioning the company to define new categories and drive growth for decades to come,” Durn responded. “Starting in year two post close, you will see our EPS growth rate faster than our overall revenue growth, will be accretive exiting year three.”

Some designers who use Figma took to Twitter to express skepticism about the deal. One designer tweeted: “Figma could’ve built tools to compete—and win—with every Adobe product in the suite. They could’ve pushed a renaissance in design tools that would’ve lasted a generation. So much potential, gone.”

Figma CEO Dylan Field explained in a Twitter thread, how the partnership with Adobe will work: “We will have the opportunity to incorporate Adobe’s expertise in imaging, photography, illustration, video, 3D and font technology to the Figma platform.” Dylan will continue to serve as CEO, reporting to David Wadhwani, president of digital media at Adobe. Figma currently has no plan to change its pricing, Field said.

In its latest quarterly results also announced on Thursday, Adobe reported net income of $1.14 billion on revenue of $4.43 billion. This reflects an increase of 13% year-over-year. Regarding the Figma acquisition, an analyst questioned whether it would have meaningful impact for the future.

“It’s not unprecedented for Adobe to purchase a dynamic competitor,” Jay Vleeschhouwer of Griffin Securities said on the call. “We can go back many years, you’ve done this before. Maybe put this in the context of some of those prior acquisitions, where you bought a competitor that had meaningful, either competitive impact or complementary technology.”

“It’s all about, ‘How do you take things that might seem competitive but are actually more complimentary and expand the nature of the market?'” Narayen said in response. “For me, when I think about what we did with Macromedia, it was really about saying, ‘We’re going to target more graphics professionals and not just focus on imaging. We’re going to focus on what’s happening with video on the web or gaming. And so I think it was an expansive part of how we looked at it. And that’s the same situation here.”

Narayen also said, “I think the opportunities are tremendous. I understand that there will be some sentiment associated with the price, and the ball’s in our court to go demonstrate how we execute against our current initiatives, as well as to demonstrate the value of this new one.”

The State of Digital Trust 2022, a new report from ISACA, a professional association focused on IT governance, finds gaps in digital trust between companies and customers. While 98% of IT professionals said digital trust is important, the report found that just 12% of their organizations have a dedicated staff role for digital trust. Seventy-six percent of respondents said digital trust is essential to digital transformation, and 82% said digital trust would be even more important in five years; but just 29% offer staff digital trust training. "In everything an organization does, the end goal must be answering the question, ‘What can we do today to better earn the trust of our customers?’" Matt Chiodi, chief trust officer, Cerby, said in a statement. "Those organizations that continually ask this question and make executing on the answers a priority will win in the future—win in market share, profitability and engagement with employees and customers." The report findings are based on a survey of 2,755 international business and information technology professionals.

"'There were no good options, so we created our own’: How Patagonia will work after founder Yvon Chouinard gave it away" by Sophie Mellor

"Prince William just inherited a $1.2 billion estate thanks to a medieval rule" by Chloe Taylor

"Signs you’re suffering from social exhaustion—and 5 tips to beat it, according to psychologists" by Kells McPhillips

Deepak Ahuja was named the first chief business and financial officer at Zipline, an instant logistics and delivery system for businesses, governments, and consumers, effective Sept. 30. Most recently, Ahuja was the CFO at Verily Life Sciences. Before that, he was the CFO of Tesla. In his new role at Zipline, he will oversee all aspects of the company's global financial operations.

Blake Jorgensen, EVP and CFO of PayPal Holdings, Inc. (Nasdaq: PYPL), is taking a leave of absence for health reasons, according to the company. Gabrielle Rabinovitch will serve as acting CFO and perform PayPal's principal financial officer's duties, effective immediately. In addition to serving as acting CFO, Rabinovitch will continue her role as SVP of Capital Markets, Investor Relations and Treasurer. Rabinovitch served as PayPal’s interim CFO before Jorgensen joined the company on Aug. 3. He previously served as CFO at Electronic Arts Inc., Levi Strauss & Co., and Yahoo! Inc.

Julie Whalen was named EVP and CFO at Expedia Group, Inc. (Nasdaq: EXPE), effective Sept. 26. Whalen succeeds Eric Hart, who will remain with the company through Oct. 1. Whalen comes to Expedia Group with more than 20 years of finance experience. Most recently, she served as EVP and CFO of Williams-Sonoma, Inc. having progressed through positions of increasing responsibility in Williams-Sonoma’s finance organization since joining in 2001, including 10 years as CFO.

Vanna Krantz was named CFO at Grindr, a social network for the LGBTQ community, effective Sept. 26, as Grindr prepares for its public listing scheduled for later in the fall, according to the company. Krantz most recently served as CFO of Passport Labs, Inc., and has served as the CFO of Masterclass, CFO of Disney Streaming Services, and also the CFO and a board member for Bamtech Media. Previously, Krantz held three different divisional chief financial officer roles at Thomson Reuters.

Julien Lafouge was named the group CFO at Spendesk, a French startup that produces spend-management software. Spending the first part of his career at Technip, Lafouge held positions as financial controller, financial director of a subsidiary in Angola, and Internal Audit Manager. Lafouge worked at the Boston Consulting Group in the strategy consulting sector in Europe and South America. He then joined BlaBlaCar, a French car sharing platform, and served as Group CFO. He then joined EMPG, a UAE-based real estate portal.

“Everyone knows that I’m the leader, I’m the king. A king can’t live in someone else’s castle. A king has to make his own castle.”

—Kanye West, a.k.a. Ye, has terminated the contract between his company Yeezy and Gap Inc. The Gap allegedly did not meet its obligations in the companies’ agreement, and Ye wasn’t able to set the prices he wanted on his products, CNBC reported. “It was always a dream of mine to be at the Gap and to bring the best product possible,” he said on “Closing Bell" on Thursday. "Obviously there’s always struggles and back-and-forth when you’re trying to build something new and integrate teams.”