The working class loses an advocate at the worst possible time 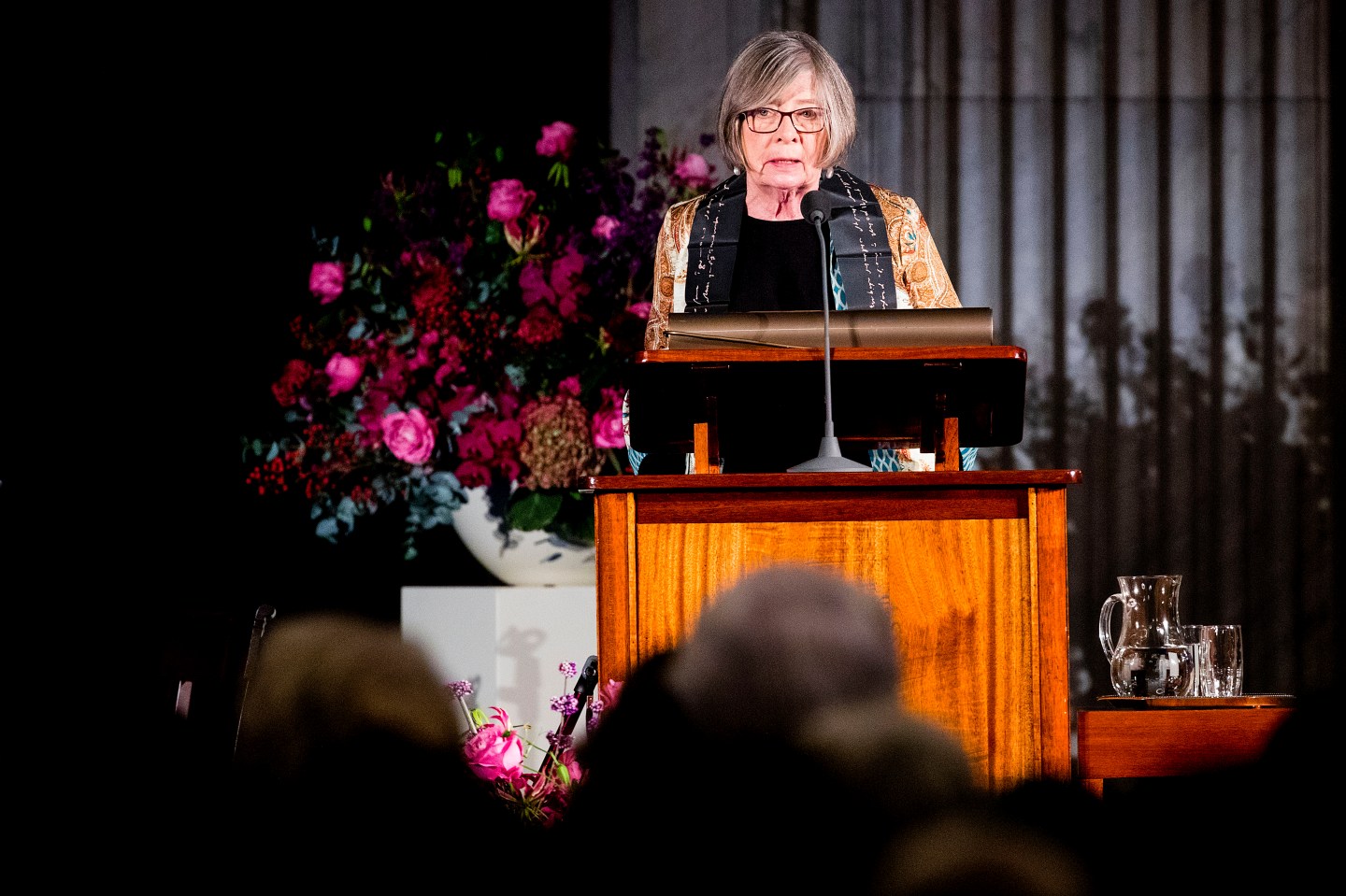 No one understood this better than Barbara Ehrenreich, a journalist and activist who burst into the public eye with her 2001 book, Nickel And Dimed: On (Not) Getting By In America. Over a two-year period, Ehrenreich went undercover working low-wage jobs to better understand the working poor and how policy interventions, specifically the 1996 Welfare Reform Act, impacted their prospects.

Living hand to mouth, trying to find affordable housing, and suffering under the veil of invisibility was all exhausting, as was the work itself. “My Walmart job was particularly taxing ’cause I had to constantly memorize the changing layout of the ladieswear department, so I know exactly where each one of several thousand items had to go,” she once told NPR. “So I no longer speak of any job as unskilled.”

Ehrenreich died last week at 81, leaving behind an enormous body of work and the Economic Hardship Reporting Project, a nonprofit she founded in 2012 to fund groundbreaking work by journalists focusing on poverty and inequality.

“She had an elegant way with words,” Alissa Quart, the executive director of EHRP, told NPR. “She was not afraid of mocking people in power. She also wasn’t afraid of activism. And I think that was something that set her apart from other great journalists. She knew when somebody was in the wrong—when a boss was in the wrong, when a patriarchal man was in the wrong—and she was willing to call them out.”

There’s plenty to call out these days.

While the number of billionaires continues to rise, there are currently some 53 million Americans, or 44% of all workers, holding low-wage jobs. Their median earnings are $10.22, or about $24,000 a year if they work full time. Women, people of color, and the under-educated are more likely to hold low-wage jobs. It’s an exhausting, dead-end life.

McKinsey broadens the size of the frontline workforce to 95 million people to include some salaried workers, like low-level managers and retail workers. This cohort makes about $33,000 per year and is often more closely tethered to corporate employers. They are also more likely to be people of color and less likely to be promoted or identified for advancement. Of all the employees in the workforce, they are also the least likely to believe in their company’s DEI efforts. So close, and yet, so far.

Regardless of how they’re classified, however, they’re leaving the workforce in droves. Some are likely sick; see below. Others have just given up. But most are from communities already in crisis, and plenty work in jobs that are likely to be replaced by automation in the future.

But Ehrenreich’s observation that no job is truly unskilled is something to build on.

Later this month, I’ll be catching up with former IBM CEO Ginni Rometty, who will update the Fortune Connect executive community on the work she’s doing as co-chair of OneTen, an initiative dedicated to hiring and advancing one million Black individuals in America over the next 10 years into “family-sustaining” jobs in fields as diverse as tech, finance, and health care—no degree required.

If you have any questions you’d like me to ask, let me know. Please use the subject line: Skilled.

Right now, the future is grim for wage-earning and frontline workers. This isn’t a work-life balance issue. It isn’t a bias mitigation issue. It’s a moral crisis.

In the early days of lockdown, Ehrenreich wondered if the U.S. could possibly meet the moment.

“My mind has been full of grim and rageful thoughts, many of which are about the lack of paid sick leave,” she told the New Yorker. “We turn out to be so vulnerable in the United States. Not only because we have no safety net, or very little of one, but because we have no emergency preparedness, no social infrastructure.” Is it still in our collective memory? “From the prehistoric perspective, people have gotten through a lot of stuff by cooperating and sticking together. We built cities, we irrigated fields,” she said.

“Whether we’ve lost that capacity, I don’t know.”

Who are the working class? Demos, a nonprofit research organization focused on racial equity, offers an interesting framing to help describe the demographic shift in the working class. Traditionally, the working class has been represented by a compelling archetype—a white man with a union job who was able to earn a comfortable wage even without a college degree. No more. The decline of manufacturing changed everything. “The working class shifted from ‘making stuff’ to ‘serving and caring for people’—a change that carried significant sociological baggage,” writes researcher Tamara Draut. “The long-standing ‘others’ in our society—women and people of color—became a much larger share of the non-college-educated workforce. And their marginalized status in our society carried over into the working class, making it easier to overlook and devalue their work.”
Demos

Long COVID and the workforce The Brookings Institute has published new research that seems to show that long-term illness related to COVID is increasingly responsible for labor shortages. Citing Census Pulse and Federal Reserve data, they find that it’s likely that some 4 million adults are out of the workforce due to long COVID. The annual cost of lost wages could be as high as $230 billion, close to 1% of total U.S. gross domestic product. Worse, it’s hitting workers in “face-to-face” industries the hardest—education, transportation, food service, hospitality, and health care, people with fewer resources and support systems.
Brookings

We’re undercounting the number of women who have left the workforce In her latest for Fortune, gender economist Katica Roy offers a more detailed assessment of the unemployment numbers for women in the U.S. “The US labor force has lost 1.17 million women since February 2020,” she writes. “If we include these missing women in July’s unemployment figures, women’s unemployment rate would be 4.6%, or at the upper limit of maximum employment.” Disaggregating the data, Roy says the real unemployment rate for Black women is 7.6% and for Latinas, it’s 7.1%. "Perhaps economists shouldn’t have been so quick to herald the historic low headline 3.2% unemployment level for Latinas last month," she says.
Fortune

A performance artist once shook the hands of 8,500 sanitation workers to thank them I’ve long enjoyed the idea of Mierle Laderman Ukeles’s work, which has been described as “a process of participatory democracy that unites people in open dialogue.” It’s a mix of writing, performance, and sculpture, much of which was in service to the idea that valuing the people who maintain our society would be a radical act. It began with her 1969 Manifesto for Maintenance Art, and she kept the theme alive. Starting in 1979, she traveled around New York City for a piece called Touch Sanitation to shake the hands of 8,500 sanitation workers as an acknowledgment of their essential role in the world. She later became an honorary Teamster and an artist-in-residence at the Department of Sanitation.
Broken City Lab

Fat and lazy? Lean and mean? Why we just can’t shake the body-based stereotypes The associations have been around since the 1940s when psychologist William Sheldon established “somatypes,” body types that he believed could be linked to personality traits. Ectomorphs, tall and thin, were shy and anxious. The rotund endomorphs were lazy and “affection-seeking.” You see where this is going. While these theories have been completely debunked, their impacts have not. A study by researchers from the University of Texas at Dallas finds that people continued to make consistent moral judgments based on people’s body types. The fatter the body, the more negative the traits. Since obesity is more likely to be found in low-income communities where access to good food and the time to prepare it is scarce, these negative first impressions are particularly dangerous.
The Atlantic

Research shows the generational stress of life in post-industrial communities People who live in once-thriving, now declining industrial age communities in the U.S., like coal mining towns, are more likely to experience negative emotions such as anxiety and a host of other effects. In a joint effort from the Queensland University of Technology, the University of Texas, the University of Cambridge, and the Baden-Wuerttemberg Cooperative State University, the research found that people living in industrialized areas scored 33% higher than the rest of the country for anxiety, had a 31% higher tendency toward depression and scored 26% lower for overall conscientiousness—which includes skills like goal-setting. It’s not just the loss of fortune—it may have also been the work itself, the researchers find. Writer Wanda Thibodeaux says it’s a wake-up call for leaders. “What happened centuries ago can be linked directly to the psychological reality of your workers today,” she says.
Inc

"Work is about a search for daily meaning as well as daily bread, for recognition as well as cash, for astonishment rather than torpor; in short, for a sort of life rather than a Monday through Friday sort of dying."