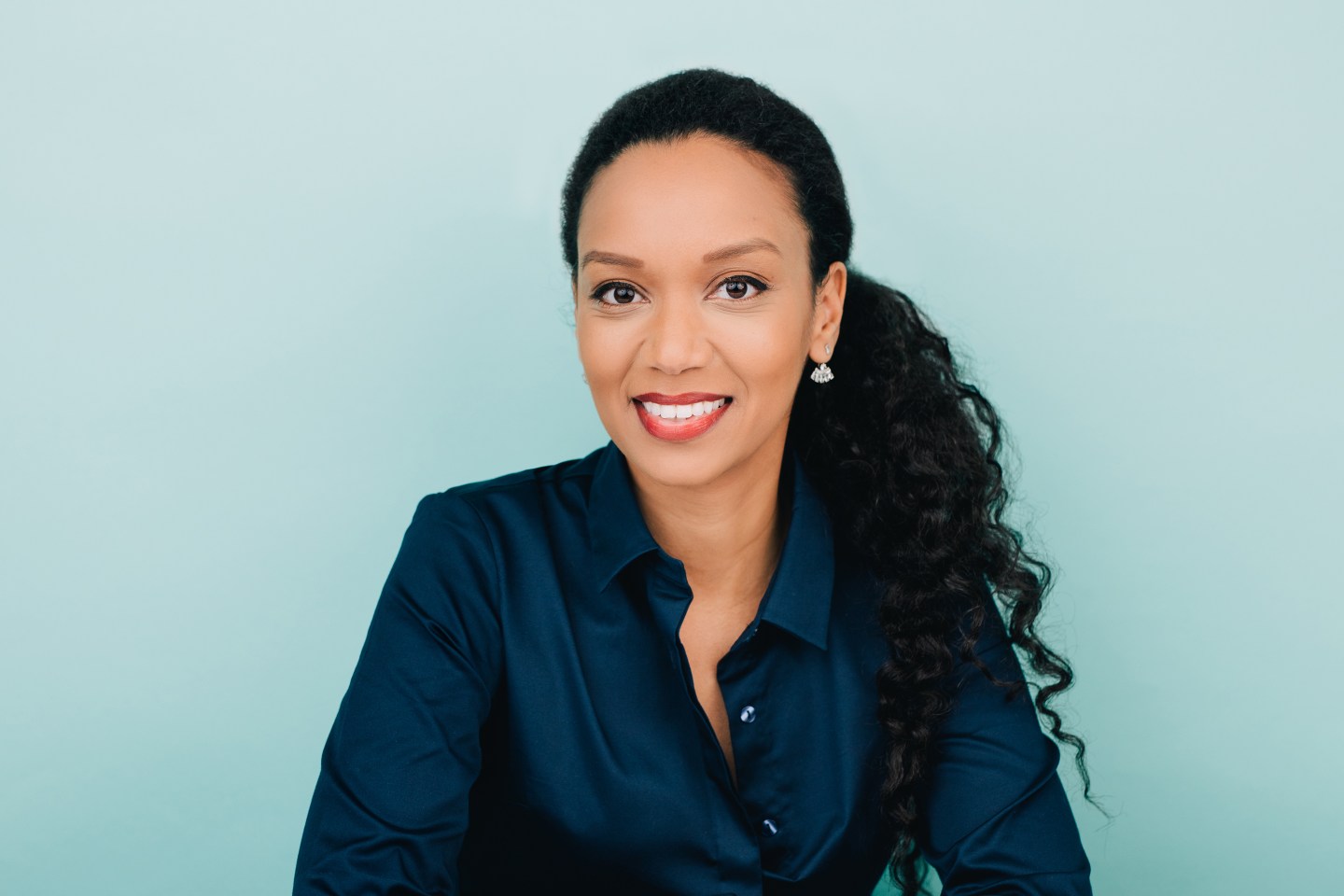 Good morning, Broadsheet readers! Meghan, the Duchess of Sussex debuts her podcast, Adam Neumann’s new startup sounds a lot like another business, and the founder of Incredible Health hits a milestone valuation. Have a wonderful Wednesday.

– Healthy valuation. Last week, an $80 million funding round landed the health care jobs platform Incredible Health a valuation of $1.65 billion. In a private market that has cooled off on minting new unicorns, the announcement turned heads for several reasons.

Incredible Health is led by cofounder and CEO Iman Abuzeid, making the company a rare unicorn—defined as a business valued at over $1 billion—that’s launched and helmed by a Black woman. Black women-founded companies receive under 0.5% of venture capital funding, according to Digital Undivided, which tracks this data. Yet Abuzeid’s Incredible Health joins a handful of Black women-founded unicorns, including Rihanna’s Savage X Fenty and Toyin Ajayi’s Cityblock Health.

“I’m aware that others are looking at me as a role model,” Abuzeid says. “Even though that’s a little bit intimidating, I hope my story provides inspiration and motivation to female CEOs and minority CEOs to pursue their visions and ambitions.”

Despite its name, Incredible Health is considered a tech company, not a health care business, which may have contributed to its valuation. The job and career platform matches nurses and health care professionals with employers, including large hospital systems. The usual job application process is flipped; nurses upload their resumes and employers contact them about opportunities. Nurses also leverage the platform for career development after securing a new job. Incredible Health’s competitors include sites like Indeed and LinkedIn, alongside recruitment firms and hospital job postings.

The company has about 180 employees and says revenue grew 500% in 2020. About 10,000 nurses a week currently sign up on the platform, Abuzeid says. There were 3 million registered nurses working in the U.S. in 2020, according to the Bureau of Labor Statistics, though that number is steadily shrinking as staffing shortages rock the profession.

Abuzeid comes from a family of doctors and attended medical school, though she didn’t complete residency. Instead, she turned to a career in technology and startups, working in consulting and at a health tech startup prior to founding her company in 2017. Still, her experience in both fields opened her eyes to the opportunities that exist in addressing hiring pain points within health care.

The outsize valuations of 2021 are far in the rearview mirror, but Abuzeid believes a few factors contributed to her company surpassing the billion-dollar milestone. She has run the business as cashflow-positive for the past few years, and she sees the valuation as reflective of the company’s ambitions.

“We are market leaders in health care labor, and with very large ambition and vision comes valuation,” she says. “As someone who is trying to build a legendary company that will one day hopefully stand on the public markets, the way the company is valued does matter.”

- An end and a first. Rep. Carolyn Maloney’s 30-year career in Congress came to an end last night when she lost a Democratic primary to Rep. Jerry Nadler in a redrawn New York City district. In another notable Tuesday contest, Rep. Val Demings won the Democratic primary for a Florida Senate seat. The former Biden VP contender would be the first Black woman to represent Florida in the Senate. Politico

- Stay informed. Yelp will now flag pregnancy crisis center listings on its platform. The tech company has an existing policy of differentiating crisis pregnancy centers from actual abortion clinics in its listings, but consumers will now see a notice that the centers offer limited medical services and may not have licensed medical professionals on-site. Axios

- Archetypes of ambition. More than a year after Prince Harry and Meghan, the Duke and Duchess of Sussex, signed their deal with Spotify, Meghan's podcast has debuted. The Duchess is now the host of Archetypes, a 12-episode series exploring how labels and tropes affect women. Meghan's first guest was Serena Williams for a conversation about ambition. Next up is an episode with Mariah Carey. HuffPost

- Go with the flow. Before Adam Neumann founded his new residential real estate startup Flow, he was an investor in the real estate tech company Alfred, cofounded by Marcela Sapone and Jessica Beck. New reporting raises questions about similarities between the two companies. Forbes

- Court date. A 12-year-old class action lawsuit against Goldman Sachs, alleging systemic bias against women in pay and promotions, will finally go to trial in June 2023. U.S. federal judge Analisa Torres rejected the investment bank’s bid to have the lawsuit dismissed because the 1,800 plaintiffs in the suit didn’t have proof of lost pay. Goldman has called the claims "baseless." Reuters

MOVERS AND SHAKERS: Donors of Color Network promoted Isabelle Leighton to executive director. Make-A-Wish America has named chief operating officer ​​Leslie Motter as its next president and CEO. Banking as a service platform Treasury Prime has appointed Meghan Ryan as chief financial officer and Nicole Phillips as vice president of marketing. Jess Szmajda, general manager of VPN business at Amazon Web Services, has joined nonprofit Out in Tech’s board of directors. Sonja Keerl has joined Constructor as vice president of product marketing.

- Coveted slot. The National Women’s Soccer League championship is finally getting a prime-time slot. CBS and the league announced on Tuesday that this season’s final game will be played in Washington D.C. on Oct. 29—at 8 p.m. ET instead of noon. Last year, players had to petition CBS to move the game from a 9 a.m. PT kickoff in Portland, Ore., to a noon ET kickoff in Louisville. This year, negotiations between the network and sponsor Ally Financial persuaded the network to move the game to prime time. The Athletic

- Italian elections. Giorgia Meloni, the leader of the far-right party Brothers of Italy, could become the first female leader of Italy. Meloni, who has campaigned on anti-immigration and gas price caps amid shortages, is currently leading center-left Democratic Party leader Enrico Letta by more than 17 percentage points ahead of Italy’s Sept. 25 elections. However, she now faces criticism after she shared a pixelated video from an Italian news site depicting the rape of a woman by a 27-year-old asylum seeker.

- First conviction. Former police detective Kelly Goodlett pleaded guilty to one count of conspiracy on Tuesday, admitting she had falsified a search warrant that misled a judge into authorizing the raid of Breonna Taylor’s apartment in Louisville. Goodlett is the first police officer to be convicted over the March 2020 raid that led to the death of Taylor. New York Times

- Final verdict. Two men involved in a plot to kidnap Michigan Gov. Gretchen Whitmer in 2020 were found guilty by a federal jury on Tuesday, ending the country’s highest profile domestic terrorism prosecutions. The case quickly became politicized, with former President Donald Trump once casting doubt on the prosecution. Gov. Whitmer is in the middle of a reelection campaign and the defense argued that the FBI took advantage of the defendants. A previous jury failed to reach verdicts for the two men, Barry Croft and Adam Fox, and acquitted two of their codefendants earlier this year. New York Times

The $18,000 breast biopsy: When having insurance costs you a bundle Kaiser Health News

"We didn't interview her about fashion... her many lines of commerce... her personal life. We interviewed about what she was doing to help get people who were unjustly or unfairly incarcerated have a second chance."