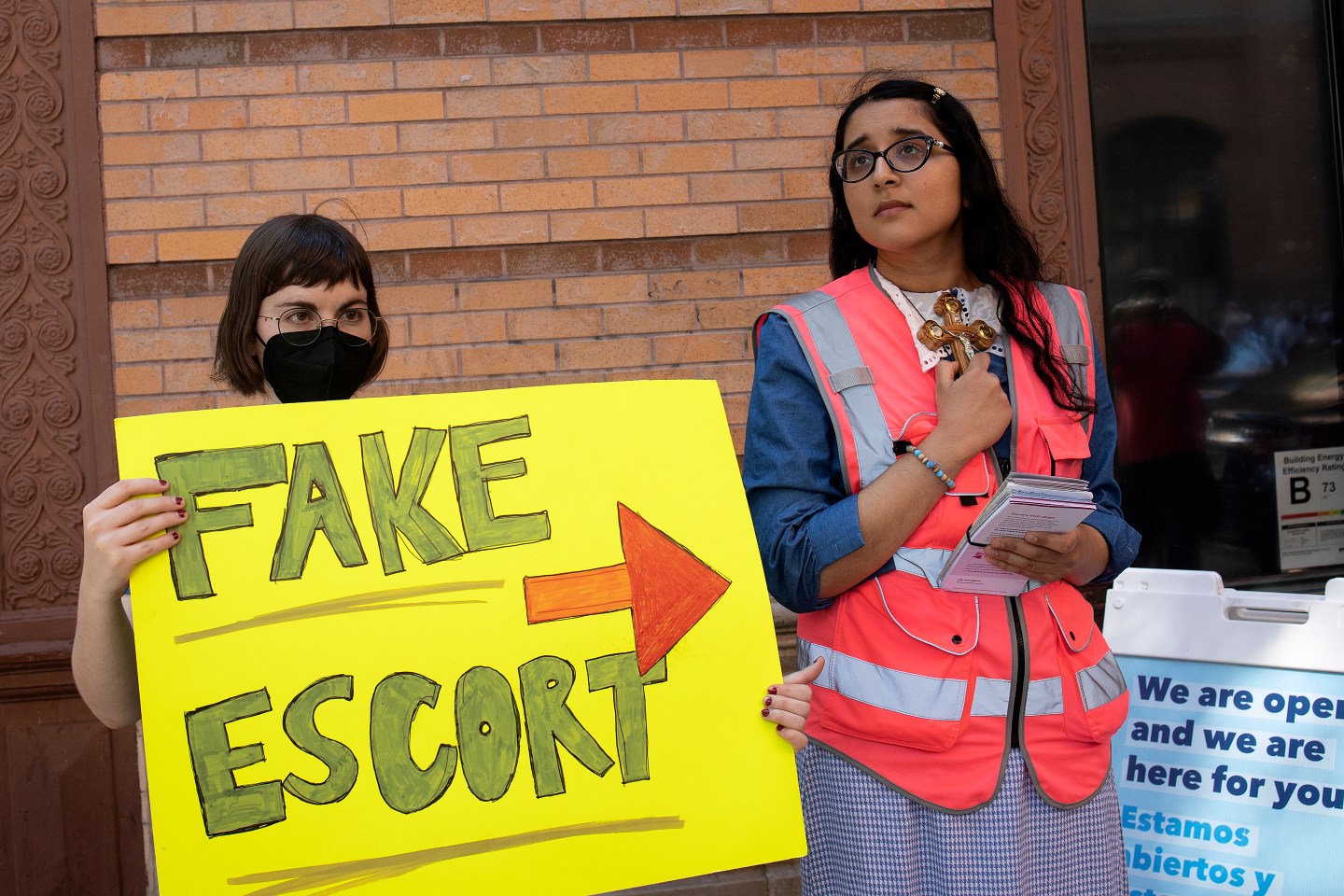 Crisis pregnancy centers (CPCs) are nonprofit organizations that pose as real medical clinics. They offer free services and counseling to pregnant individuals, with the goal of dissuading them from having an abortion.
Andrew Lichtenstein—Corbis/Getty Images

Good morning, Broadsheet readers! This is Paige McGlauflin, filling in for Emma. She’ll be back in your inboxes tomorrow. The same pathogen that shut down an Abbott Nutrition infant formula plant has been found at other companies, women’s soccer beat the men’s sport for audience attendance, and antiabortion organizations posing as medical clinics get more funding than real abortion providers.

– Under the radar. Companies, lawmakers, and individuals alike have rushed to donate to abortion care providers in the wake of Roe v. Wade’s reversal. Yet many donors are unintentionally giving money to organizations that seek to undermine abortion access on the front lines.

Crisis pregnancy centers (CPCs) are nonprofit organizations that pose as real medical clinics. They offer free services and counseling to pregnant individuals, with the goal of dissuading them from having an abortion.

CPCs outnumber abortion clinics three-to-one nationally and are present in every state and the District of Columbia. While these centers masquerade as medical clinics, under half report having a licensed medical professional on staff and most don’t offer actual medical services. In once instance, state-funded CPCs in Texas gave medical misinformation to undercover NBC News producers seeking counseling.

Yet CPCs receive five times more funding than legitimate abortion clinics, according to research from the National Committee for Responsive Philanthropy (NCRP), a progressive watchdog group for charitable spending in the U.S. Even in states where abortion is protected, CPCs receive 1.5 times more funding than actual clinics. Much of this comes from public funding, which these centers can access more easily than abortion clinics, which face a number of regulatory hurdles.

But taxpayer money isn’t the only way these centers secure funds. NCRP’s research found that CPCs also attract a large cash flow from foundations. Crisis centers received $278 million vs. the $56 million that went to actual clinics between 2015 and 2019.

“If a CPC writes a grant and says, ‘We’re going to offer free childbirth classes to Black pregnant people in the community,’ there are folks who want to fund that,” says Brandi Collins-Calhoun, senior movement engagement manager with the NCRP and one of the report’s coauthors. “They don’t see the broader picture. They don’t know that the people who are teaching the childbirth classes are spending their Saturdays in front of abortion clinics, coercing people to come to their classes.”

One of the best ways funders can screen for these organizations is by centering abortion as a talking point when performing due diligence.

Beyond just discussing abortion during due diligence, the authors say philanthropists should be more open about their charitable giving to abortion clinics and funds.

“A lot of funders are either afraid to fund or mention abortion, or are funding it and don’t fund it publicly. Funding things in silence just perpetuates the shame and the stigma that organizers are working really hard to unpack and dismantle,” says Collins-Calhoun. Plus, it helps funders get an accurate gauge of how much funding is going to abortion clinics in the first place.

“Our research has been super helpful to a lot of funders because they assumed that someone somewhere was handling it anonymously, but they never really knew how much,” Collins-Calhoun adds. The report recommends grantmakers direct their donations to proabortion organizations like Sister Reach and CHOICES. “I’ve had calls with funders who had no idea that abortion funds were not being sustained,” Collins-Calhoun says.

- Burial arrangements. The Trump family may be using the burial place of Ivana Trump, the first wife of former President Donald Trump, as a way to secure a tax break. Ivana was buried at the family’s golf course in Bedminster, N.J. last month. Under state law, any land used for cemetery purposes is exempt from several taxes, including income, real estate and sales taxes. Previously, the golf course received a tax reduction for being registered as a farm—the former president reportedly owns several goats and farms hay at the property—and was taxed just $6 per acre instead of $462 in 2019. Fortune

- Beyond Abbott. Cronobacter sakazakii, the pathogen that sickened four infants and led to a months-long shutdown of an Abbott Nutrition infant formula factory in Michigan, has been found in other companies’ formula plants. Almost a decade’s worth of FDA inspections found Cronobacter in samplings from high-hygiene areas in plants owned by Mead Johnson, Gerber, and PBM Nutritionals. Though Cronobacter can be widely found in the environment, infections in infants can be deadly, making it more worrisome that the contaminant is present where infant food is made. ABC

- NFL suspension. Cleveland Browns quarterback Deshaun Watson was suspended for the first six games of the NFL’s 2022 season following an investigation into claims of sexual misconduct. The NFL asked that Watson, who was accused of sexual assault and inappropriate misconduct by over two dozen women, be suspended for a whole year, while the players union asked he forgo any suspension. Sue L. Robinson, a retired federal judge appointed by both the NFL and union to oversee player discipline, handed down the decision. Watson’s former team, the Houston Texans, reached settlements with 30 women who accused Watson of sexual misconduct during massage appointments last month. New York Times

- Brokering more data. A decade ago, news broke that Target had developed an ad algorithm that could detect if a customer was pregnant via data analysis, with the retailer claiming that moms-to-be were a multi-million dollar opportunity. Now, data brokers are selling datasets, sometimes created from the same analysis used by Target, containing information on millions of pregnant or potentially pregnant individuals across the country. Experts worry that the data, which can cost as little as 49 cents per person, will be used by antiabortion groups or law enforcement to find out who has visited an abortion clinic. These concerns are similar to those of brokers selling data from menstrual tracking apps. Gizmodo

- Fan favorite. Women’s soccer dominated the men’s sport for attendance this season. Over 87,000 fans attended Wembley Stadium on Sunday night, where England’s women’s soccer team beat Germany 2-1 in the season’s final game. The match was behind only two Barcelona women’s soccer matches earlier in the season for attendance, which both brought in over 91,000 fans. The highest attendance for a men’s game was 73,564 for Manchester United vs. Chelsea in April. ESPN

- Family business. The Grosvenor family has one of the largest fortunes in the British aristocracy, but the family’s main source of wealth has only been passed down between male heirs for centuries. Things may be changing, however. More women are stepping into senior roles at Grosvenor Group, the family’s multibillion-dollar investment firm. Over three dozen women were hired or promoted at the firm in recent years, responsible for senior roles like overseeing financial holdings in external funds and North American investments. Bloomberg

Leave my disability out of your antiabortion propaganda New York Times

How did a dating app become my longest-running relationship? The Cut

“I went from being heartbroken, lost, confused, and in just one year, I was able to turn that into having about half a million in assets.”

-Alexia Ealey, a travel nurse from Dothan, Ala., who sold her house and bought and renovated four single-family houses after a breakup. Ealey is one of many women who found empowerment through real estate investing after a breakup or divorce.