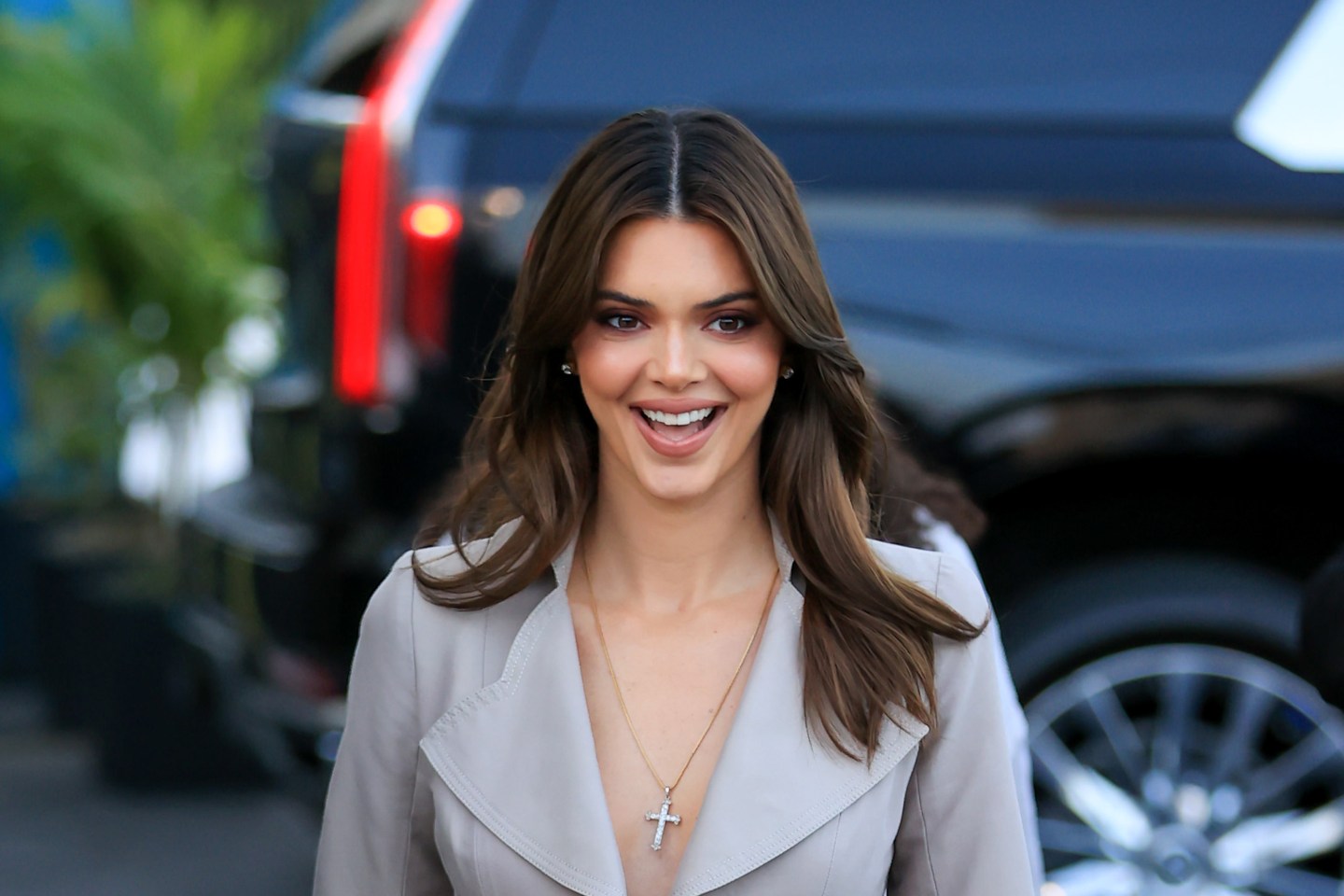 Good morning, Broadsheet readers! Companies are scaling back paid parental leave; Walmart expands its health plan’s coverage of abortion—slightly; and Kendall Jenner’s tequila brand has learned from the success of her sisters’ business endeavors. Have a lovely Tuesday.

—In high spirits. As the Kardashians have expanded their business empire, the famous family has mostly pursued apparel and beauty endeavors, from Skims and Good American to Kylie Cosmetics and Kim Kardashian’s new skin-care line, SKKN.

An outlier among that lineup is 818 Spirits, the tequila brand launched by Kendall Jenner just over a year ago. “I like to zig when everyone zags,” Jenner explained in an interview last week.

In its first year in business, 818 has sold 120,000 nine-liter-equivalent case depletions to bars, restaurants, and stores, making it the fourth highest-selling tequila in the $45 and up category, says COO and president Mike Novy, who worked for Constellation Brands for more than a decade. The brand aims to build on that growth by targeting an older, and perhaps more discerning, consumer. Last week it launched Eight Reserve, a premium añejo product that will sell for $200 a bottle.

The company now employs a workforce of 42 people, many of whom are in sales functions and working to get 818 into bars and restaurants across the country. Overall, the brand aims to double sales annually for the foreseeable future.

As the company works to reach those goals, Jenner, 26, says the business is her top priority—over the modeling career for which she has become known. “Fashion and modeling were a huge priority for me for 10 years of my life,” she says. “But I’ve really shifted into this businesswoman mindset. I feel like I’ve really come into my own as a woman and as a founder.”

It’s no surprise, then, that the businesses spearheaded by other members of the Kardashian-Jenner clan—Skims is now a $400 million business while Good American brought in $130 million in revenue last year—may hold some lessons for Jenner and Novy as they expand 818.

“We do talk about what we can learn from the other businesses and how they’re speaking to consumers,” says Novy of the family’s brands. “They really listen to consumers and give [them] exactly what they want—like diversity of sizes, and colors and fabrics. The lessons we’ve learned, through watching her older sisters, is how to listen to your consumers and give them what they’re asking for.”

But the alcohol industry isn’t as straightforward as the fashion industry. 818 is navigating a regulated market, where selling directly to the consumer often isn’t an option. And the brand sells just a few products, rather than a sweeping assortment of apparel. “They’re completely different,” Jenner says of operating in the spirits sector. “But my inspiration from my family and sisters comes from seeing how hard they work.”

While Jenner may be the odd one out in her family’s portfolio of businesses, a celebrity-backed liquor brand is hardly unusual. What Novy and Jenner hope will distinguish 818 long term is Jenner’s level of involvement in the brand. “It really was my idea,” she says of the decision to create a youthful, approachable tequila brand. That was also a key factor in Novy’s decision to take the COO job. “Celebrity brands who have celebrities who aren’t in it for the long haul, who think it’s going to be fun and easy, generally don’t succeed,” he says.

818 benefits from Jenner’s fans outside of the spirits brand—including viewers of The Kardashians, the reality show that now airs on Hulu. In a June interview, Good American CEO and Skims chief product officer Emma Grede, who works closely with Kim and Khloé Kardashian, explained why the sisters’ businesses have become such a big part of their on-screen narratives. “The reason you’re seeing the brands take a front-row seat in that way is because the girls are at the stage of their life where their brands are what they do every day,” Grede said. “Their businesses are just so intertwined in their everyday lives.”

An 818 plotline has yet to be woven into the show, but that moment may arrive soon. “It’s pretty inevitable,” Jenner says. “It’s pretty much all I’m doing.”

—Parental leave bust. Employers are cutting back on paid leave for new parents as companies brace for economic turbulence and try to reestablish pre-pandemic norms. The number of firms offering paid maternity leave beyond the legal minimum dropped from 53% in 2020 to 35% this year, according to the Society for Human Resource Management. Paid paternity leave fell from 44% to 27% in the same time frame. Similarly, the number of employers offering extended paid parental leave dropped after the 2008 recession, from 18% to 14% in 2009. Wall Street Journal

—Health plan. Walmart has expanded its abortion policy to now include coverage for employees who must receive abortions in cases of a health risk to the mother, rape or incest, ectopic pregnancy, miscarriage, or lack of fetal viability. The company’s health care plan does not cover abortion for other reasons. The retail behemoth, based in Arkansas, where abortion is banned for nearly all circumstances, will also cover travel costs for workers seeking abortions covered by its health care plan. USA Today

—Real estate ethics. A South Dakota ethics board has found that GOP Gov. Kristi Noem may have engaged in misconduct after intervening in her daughter’s real estate appraiser license process and flying state-owned planes to political events. The board voted unanimously to invoke procedures for a contested case against Noem, who denies wrongdoing, and said “appropriate action” could be taken against her. The investigation could have ramifications for Noem, who is up for reelection this fall and has hinted at aspirations for a 2024 presidential run. Associated Press

—Shortened sentence. Eleven Hindu men convicted in 2008 for the gang rape of a pregnant Muslim woman during 2002 Hindu-Muslim Gujarat riots were released from jail last week. The victim, Bilkis Bano, said that the “trauma of the last 20 years washed over [her] again” as her attackers were released. Prime Minister Narendra Modi—who was the top official in Gujarat at the time of the riots—gave a speech calling for people to “do nothing that lowers the dignity of women” at the same time as the men were freed. New York Times

—Laying blame. The killing of Daria Dugina, a Russian nationalist journalist and daughter of close Putin ally Alexander Dugin, via a car bomb has worsened strains between the country and Ukraine. The Russian government blames Ukraine for the bombing, which Ukraine vehemently denies, claiming a Ukrainian woman who was in Russia with her daughter at the time of the bombing orchestrated the attack. Ukrainian leaders worry Russia will use the killing to launch more attacks on Aug. 24, the 31st anniversary of Ukraine’s independence and the six-month anniversary of Russia’s invasion of Ukraine. Fortune

—Worrying trend. The number of late-stage cervical cancer diagnoses is on the rise in the U.S., according to a recently published study from UCLA’s Department of Obstetrics and Gynecology. While overall cases decreased between 2001 and 2008, late-stage cases, which have only a 17% survival rate over five years, have increased 1.3% per year. NPR

—Paradoxically sexist.  Positive media coverage of female executives could end up perpetuating the sexist status quo that keeps female leaders few and far between. A recent study of German media coverage of business leaders by communications consulting firm Finsbury Glover Hering found that only 13% of sampled print media interviews were with women business leaders; nearly a quarter of them discussed the subject’s gender, and stories were nearly twice as likely to discuss the women’s appearance and six times as likely to include questions about their private lives as coverage of male leaders. Quartz

House of the Dragon shows childbirth at any cost. Sound familiar? IndieWire

Why wouldn’t your nutritionist have an eating disorder? Bustle

—Sheryl Sandberg on marrying again after the death of her husband Dave Goldberg in 2015. The former Meta COO wed Tom Bernthal in Jackson, Wyo., on Saturday.