Apple pitches itself as a paragon of privacy. So why is it reportedly planning more ads on the iPhone? 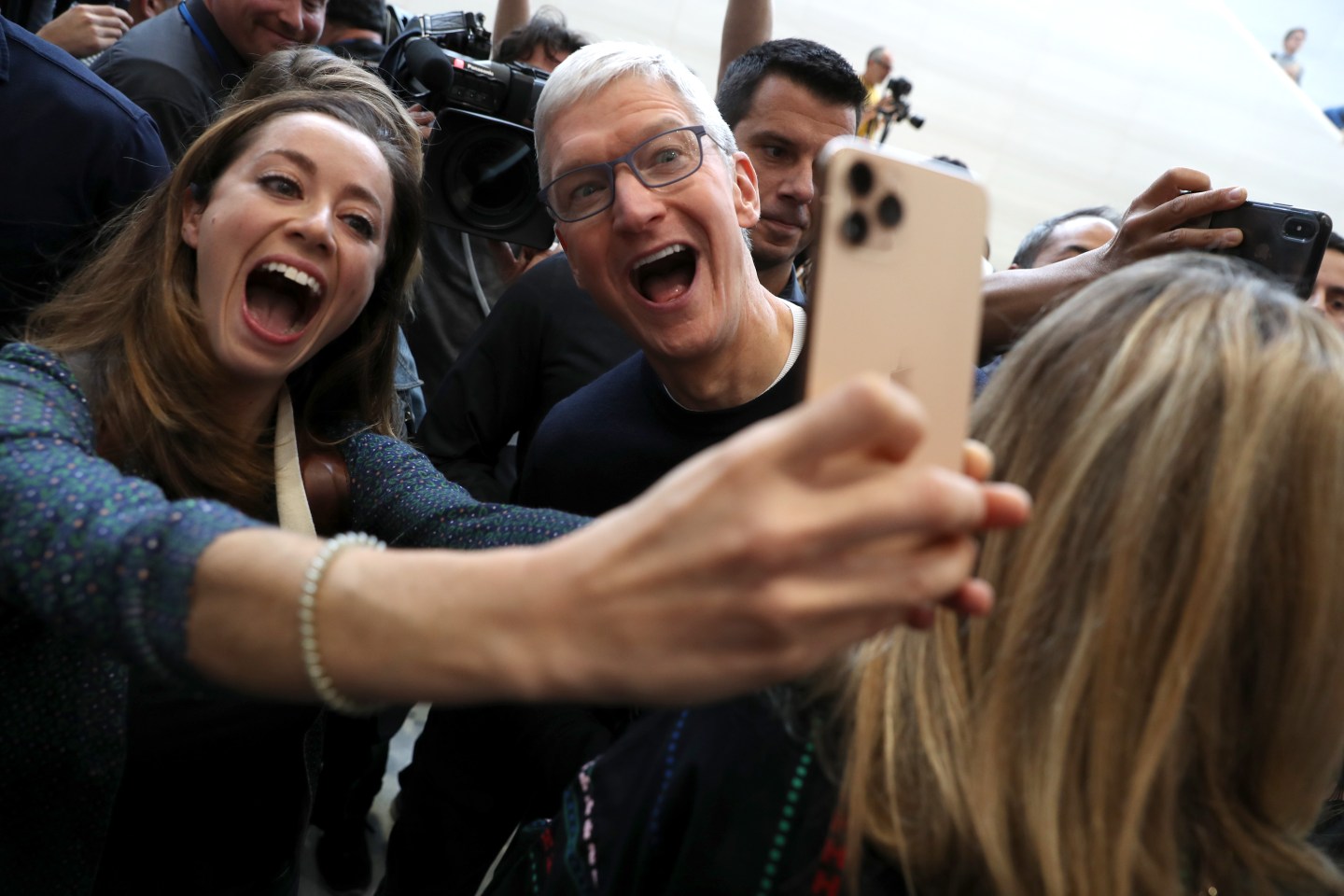 Curious about the company’s marketing practices, I opened up the iPhone’s default Stocks app, one of the few places where Apple currently places ads. Sure enough, I encountered an ad for a jewelry company I’d recently researched and visited (sorry, fiancée, I was in the market for my wedding band). While I don’t know for certain, I suspect the targeted ad stemmed from my use of the Apple Maps app for directions to the jeweler’s store. Gurman notes that the ads Apple serves are based on data it gleans from its other services and from your Apple account.

Apple has long promoted the iPhone as a privacy haven, a place where users can avoid the constant barrage of digital surveillance employed by Facebook, Google, and countless other ad-driven companies. Just last year, Apple made it much harder for developers to track users’ activity between apps on the iPhone, iPad, and iMac, a change that upended the online advertising landscape.

Yet Gurman’s reporting Sunday suggested Apple aims to more than double its $4 billion in annual digital advertising sales—a pursuit that carries a whiff of hypocrisy and could further antagonize federal lawmakers.

Apple hasn’t announced specific plans for an ad ramp-up, but Gurman offers a convincing case for how the company could reach its revenue goals. He envisioned Apple including ads in more of its operating system’s native apps, such as Maps, Books, and Podcasts (they’re already in the App Store, the News app, and the Stocks app). He also predicted Apple could embrace search ads in its Maps app, which would allow marketers to pay for appearing and ranking higher in search results. (Apple already employs search ads in App Store.)

While those two concessions would signal some restraint on Apple’s part, any venture deeper into the digital ad space involves risk for the world’s most valuable company.

At the most basic level, Apple could undercut its privacy-focused reputation, causing a loss of smartphone, tablet, and personal computer customers. However, any sales declines likely would be minuscule, owing to Apple’s incredible brand loyalty and the hassle of switching to another operating system. I’m certainly not surrendering my iPhone over an annoyingly on-point jewelry ad.

The bigger threat, though, stems from the potential legislative reaction to Apple’s continued capitalization on its monopolistic operating system.

As it stands, a large number of federal lawmakers are already fed up with Apple, Amazon, Alphabet, and other Big Tech giants using their dominant online platforms to bully smaller firms.

To wit, a signature Senate antitrust bill that would blunt the power of tech behemoths, largely by barring companies from preferencing their own products and services on their platforms, gained steam in recent months. While the legislation, known as the American Innovation and Choice Online Act, ultimately got moved to the back burner amid a rush of higher-priority bills and last-minute resistance from lawmakers, the sentiment isn’t fading anytime soon.

In moving toward more ads on its native apps, Apple would be engaging in precisely the kind of activity that has rankled Congress.

Through last year’s app-tracking privacy changes, Apple caused other companies to lose out on billions of dollars in ad revenue. Meta, the parent of Facebook and Instagram, has forecasted that this year’s losses owing to Apple’s actions could approach $10 billion.

If Gurman’s reporting comes to fruition—which it does far more often than not—Apple would then be turning right around and raking in billions from advertising within its already mighty operating system. While Apple would likely counter that it’s merely harnessing the strength of its internal products, rather than profiting off users’ activity across third-party apps, that argument likely won’t win over a growing chorus of antitrust advocates. (Surely Mark Zuckerberg would have a choice word or two, as well.)

In pursuing greater advertising riches, Apple officials could conclude that the extra billions in revenue will easily overcome any risk tied to the effort. Apple also wouldn’t be the first company to bank on Congress dithering on legislation that might threaten its business model.

Either way, Apple’s reported ad aspirations mark another departure from the company’s roots and a revealing display of its priorities. Next time Tim Cook and company talk about your privacy, remember that they might also have their own best interests in mind.

An algo alarm. Chinese government officials have secured information about algorithms used by some of the nation’s largest tech companies, a first-of-its-kind step taken by the autocratic regime, Bloomberg reported Monday. Chinese regulators published a list of 30 algorithms used by e-commerce giant Alibaba, TikTok parent ByteDance, and tech conglomerate Tencent, among others, though it was unclear whether government officials obtained the source code behind each algorithm. The New York Times separately reported Sunday that U.S. lawmakers are growing more concerned about the national security implications of the Chinese government potentially gaining access to TikTok data on American users.

Saying no to BitGo. Cryptocurrency financial services company Galaxy Digital is backing out of a $1.2 billion acquisition of digital asset custody firm BitGo, citing the company’s failure to produce audited financial statements, CoinDesk reported. The announcement comes 15 months after Galaxy Digital, led by high-profile crypto bull Michael Novogratz, announced the acquisition amid a spike in cryptocurrency values. BitGo, which was supposed to provide its 2021 financial statements by the end of July, didn’t immediately respond to a request for comment from CoinDesk.

On the upswing. Bitcoin values briefly topped $25,000 late Sunday, the first time that the cryptocurrency reached the benchmark since mid-June, CNBC reported. The rally followed a run of positive news about the global economy and easing inflation rates in the U.S., both of which have weighed on prices over the past several months. The price of Bitcoin slid Monday morning back to about $24,100.

Sticking to the plan. Gaming company Unity Software said Monday that it has rejected a $17.6 billion takeover offer made last week by mobile marketing firm AppLovin, Reuters reported. Unity Software officials said the acquisition bid was not in the best interest of shareholders and did not meet a threshold for breaking the company’s deal to acquire AppLovin rival IronSource. Unity Software agreed in mid-July to buy IronSource in an all-stock transaction valued at about $4.4 billion.

Map flap on tap. A cartography kerfuffle is holding up a signature piece of last year’s $1.2 trillion infrastructure package. Federal officials haven’t completed the lengthy process of mapping out areas of the U.S. in need of better access to high-speed internet, contributing to a delay in distributing $42.5 billion to rectify the issue, the Wall Street Journal reported Sunday. The Federal Communications Commission isn’t expected to finish the mapping effort until sometime in 2023, meaning internet providers like AT&T, Comcast, and Verizon will continue waiting for funding that could boost their bottom lines. The U.S. has historically relied on inaccurate broadband service maps, leading to service delivery issues across the country.

Lawmakers demanded new maps after flawed data in past subsidy programs caused construction projects across the country to bypass many of the Americans that they were supposed to serve. Officials warn, however, that getting the mapping right will take time.

“We understand the urgency of getting broadband out there to everyone quickly,” said Alan Davidson, chief of the Department of Commerce office in charge of allocating the broadband funding. “We also know that we get one shot at this and we want to make sure we do it right.”

Why is Shiba Inu’s coin up 25% today? Rumors of a crypto game and Ethereum’s upgrade are powering its bull run, by Grady McGregor

What is ‘quiet quitting’? Gen Z is ditching hustle culture to avoid burnout, by Alena Botros

Wastewater is trying to tell us something about the future of COVID, polio, monkeypox, and the next epidemic to come, by Erin Prater

Crypto Reddit mobilizes after being pummeled by bankruptcies: ‘I am skipping lunch today and putting $15 into GoFundMe instead,’ by Olga Kharif and Bloomberg

Facebook failed to catch blatant misinformation in ads ahead of Brazil’s 2022 election—for the fourth time, by Barbara Ortutay and the Associated Press

What a hack. Is “Pharma Bro” Martin Shkreli up to his old tricks? The crypto universe was left to wonder over the weekend as the value of Martin Shkreli Inu, an eponymous cryptocurrency tied to the felonious founder of Web3 startup Druglike, plunged 90% following a huge selloff of the token from a wallet likely belonging to the infamous entrepreneur. Shkreli, best known for jacking up the price of a lifesaving drug from $13.50 to $750 per tablet and getting convicted on securities fraud charges in a separate matter, appeared to claim in a message to Bloomberg that hackers dumped 160 billion Martin Shkreli Inu valued in the neighborhood of $2 million. Shkreli skeptics, however, wondered whether the onetime “most hated man in America” was bailing out of his creation.