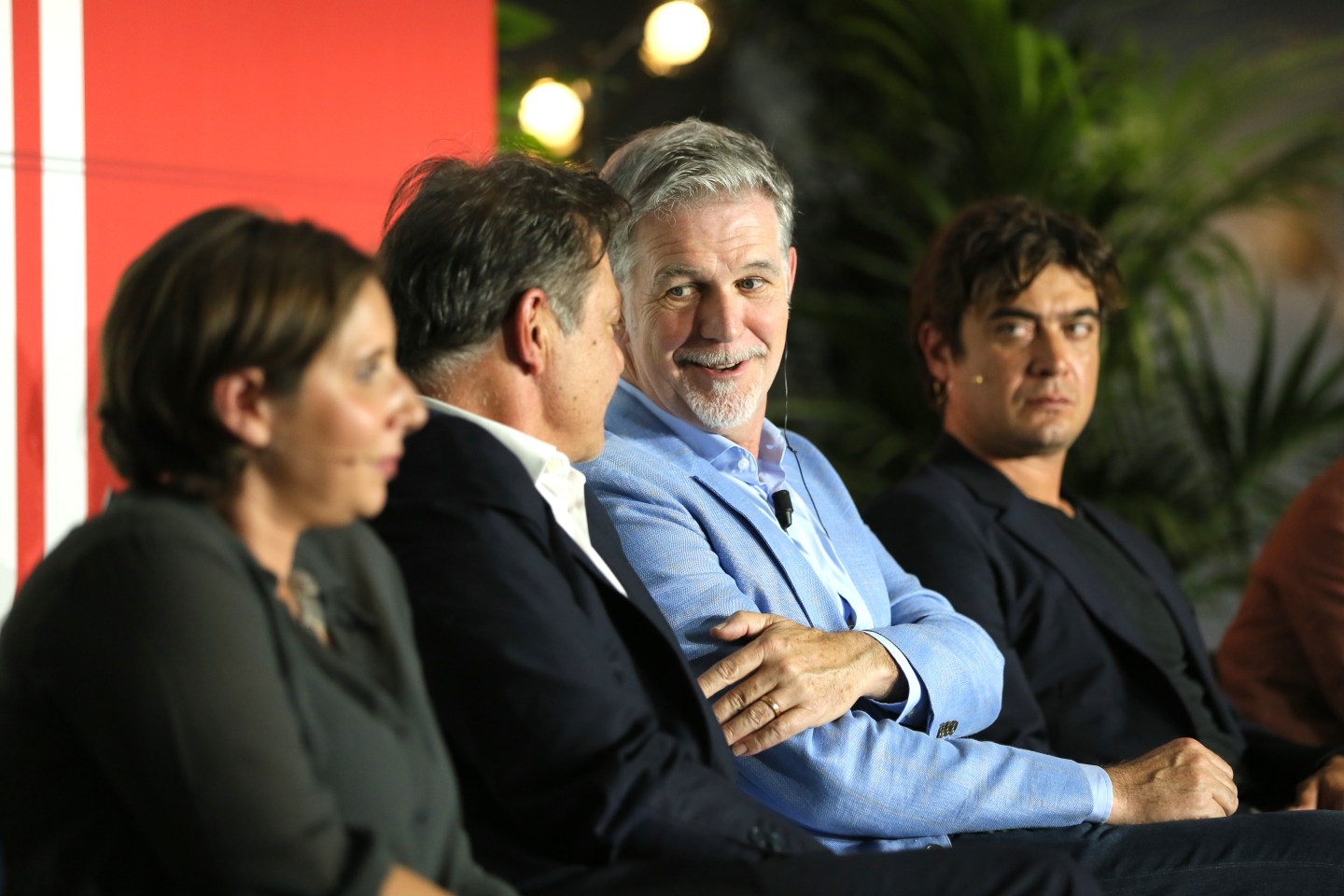 By Big Tech standards, Netflix has remained a strongly independent company over its 25-year run, spurning big acquisitions and splashy deals that could unmoor its roots.

So it stands to reason that the streaming giant, set to finally show ads alongside its videos, went the unconventional route with its selection of a major advertising partner.

Netflix announced Wednesday that Microsoft will provide the services needed to launch its ad-supported tier in the coming months, a surprising choice given the software company’s limited television footprint. Microsoft reportedly beat out Alphabet’s Google and Comcast’s NBCUniversal, two companies with extensive experience in digital video advertising, for the prized spot.

“Microsoft has the proven ability to support all our advertising needs as we work together to build a new ad-supported offering,” Netflix COO and chief product officer Greg Peters said in a statement. “More importantly, Microsoft offered the flexibility to innovate over time on both the technology and sales side, as well as strong privacy protections for our members.”

After years of fiercely resisting the addition of ads on its platform, Netflix caved this spring following two developments: a stark slowdown in subscribers that caused its stock price to crater (it’s down 70% year to date) and the success of lower-cost, ad-supported options offered by its streaming rivals like Hulu and HBO Max.

Unable to quickly build a highly complex advertising infrastructure from scratch, Netflix spent the past few months evaluating suitors for its highly anticipated foray into commercials. The dating game ranked among the most intriguing story lines in years for marketing mavens, who predicted advertisers would spend billions of dollars to pitch their products on Netflix.

Beyond the brief statement referenced above, Netflix hasn’t said much about why it chose Microsoft for the gig. But advertising executives and market analysts theorized Wednesday that Microsoft’s corporate profile actually pairs well with Netflix—even if it doesn’t have a long television-advertising track record.

First and foremost, Microsoft doesn’t operate a rival streaming service, a stark contrast with Google (owner of YouTube and YouTube TV) and NBCUniversal (Peacock). Netflix has historically avoided those kinds of tricky tie-ups, choosing to remain fiercely independent in an era of Big Tech consolidation.

“I have to imagine, in choosing Microsoft, Netflix was concerned about the conflicts they would potentially expose themselves to with other key partners,” Matt Spiegel, a top media and entertainment executive at the global information solutions company TransUnion, told Ad Age.

On top of that, Microsoft boasts a relatively clean reputation when it comes to privacy-related matters, which Netflix obliquely alluded to in its statement Wednesday.

While Microsoft is no slouch in the digital marketing space—the company in fiscal 2021 reported $8.5 billion in search-related ad revenue primarily via Bing, plus $10.3 billion in LinkedIn-related revenue that stems in part from ads—it hasn’t drawn nearly as much scrutiny as Google, Meta, and Amazon for privacy-violating, revenue-driving practices.

In a similar vein, Netflix’s success owes in large part to its data-driven algorithms, which use customers’ viewing habits to push recommended content, helping to keep paying subscribers hooked on the platform. But Netflix, as far as we know, hasn’t historically monetized the data of its 220 million subscribers by selling it to third party advertisers. If Netflix plans to remain as true to that ethos as possible while entering the ad game, the streamer will need a partner willing to follow its lead.

“It makes total sense that Netflix would make that a big issue,” Kevin Krim, CEO of the marketing data and analytics company EDO, told The Hollywood Reporter. “If you have such a valuable subscriber base, you are going to be incredibly protective of them.”

Microsoft could potentially offer deeper synergies with Netflix, including access to its massive gaming infrastructure (Netflix is in the early stages of branching into games, though some skeptics question the strategy). The software giant also boasts some television ad tech foundation following its acquisition in June of digital advertising company Xandr for a reported $1 billion—but it should still be nimble enough to accommodate Netflix’s needs.

For this partnership to succeed, Microsoft and Netflix will need to quickly hone their technological chops and build better relationships throughout the ad industry. In doing so, they’ll at least start from a place of shared values.

Not a good sign. Embattled cryptocurrency lender Celsius Network filed for Chapter 11 bankruptcy Wednesday, one month after it indefinitely froze withdrawals and other transactions amid a liquidity crisis. The move adds to Celsius customers’ fears that they might never recover their investments from the platform, which had $12 billion in assets under management as of May. Celsius officials said they plan to restructure the company, rather than liquidate it.

No longer on Autopilot. Tesla executive Andrej Karpathy, the leader of the company’s self-driving and artificial intelligence divisions, is leaving his post after a five-year stint. Karpathy’s departure adds to the uncertainty surrounding Tesla’s autonomous driving unit, known as Autopilot, which has failed to meet ambitious targets set by CEO Elon Musk on rolling out fully self-driving technology. Karpathy said he does not have any immediate plans for future endeavors.

Ready to deal? European Union members are considering a potential settlement agreement with Amazon that would address complaints about the e-commerce giant’s data usage and digital preferencing practices, Bloomberg reported Thursday. Under terms of the pact, Amazon would stop using data obtained from independent sellers on its platform for the purposes of driving its own retail business, and it would give no preference to its logistics and delivery service customers when ranking products on its sites. EU regulators have been investigating Amazon’s practices on both fronts since 2019.

Holding them responsible. About 550 women filed a class-action lawsuit Wednesday against Uber, alleging the ride-hailing company’s negligence precipitated violent attacks and harassment by drivers on the platform. Lawyers representing the women said “there is so much more that Uber can be doing to protect riders,” suggesting the company could work to add more cameras to drivers’ vehicles and perform stronger background checks. Uber officials declined to comment on the lawsuit, but they added the company has built several new safety features in recent years.

Cooling on censorship. Has Big Tech taken its eye off the ball when it comes to policing Russian propaganda online? Ukrainian officials and a coalition of nonprofits think so. The Washington Post reported Thursday that leaders of the besieged nation, along with Europe’s Disinformation Situation Center, argue that an initial surge of actions designed to undercut Russia’s propaganda effort have lagged in recent months. The two sides say thousands of YouTube videos, tweets, and other social media posts aimed at swaying public opinion against the Ukrainian resistance remain accessible online.

As Russian efforts shift from state media megaphones to individual influencers and “troll armies” coordinated via the messaging app Telegram, Ukrainian authorities and their nonprofit partners have been tracking and flagging posts that use derogatory or dehumanizing terms for Ukrainians as a way of justifying the war.

The report finds that upward of 70 percent of posts flagged as anti-Ukrainian hate speech on YouTube and Twitter remained available as of late June, while more than 90 percent of the accounts responsible for such posts remained active.

Where in the world are the Three Arrows Capital founders? by Taylor Locke

Bitcoin holds its ground amid Celsius bankruptcy, claws toward $20,000, by Lyllah Ledesma and CoinDesk

The remote work revolution is a ‘chaotic transition.’ Here’s how tech leaders can make it successful, by Alicia Adamczyk

A parliamentary pause. If the U.K.’s landmark online safety bill doesn’t pass, you can blame (or thank) Boris. As The Verge reported Thursday, a long-awaited and controversial U.K. bill forcing strict monitoring of online platforms by large tech companies is now on hold, thanks to the downfall of Prime Minister Boris Johnson. The House of Commons was scheduled to vote on the bill next week, but that effort has been put on ice as the Brits battle over Johnson’s replacement following a series of Downing Street scandals. Critics of the bill will surely rejoice, hoping that the phrase “legal but harmful”—the nebulous standard that tech companies would have to use in deciding whether content needed to be censored—never again resurfaces. Johnson’s replacement, however, could revive the proposed legislation following a summer recess.