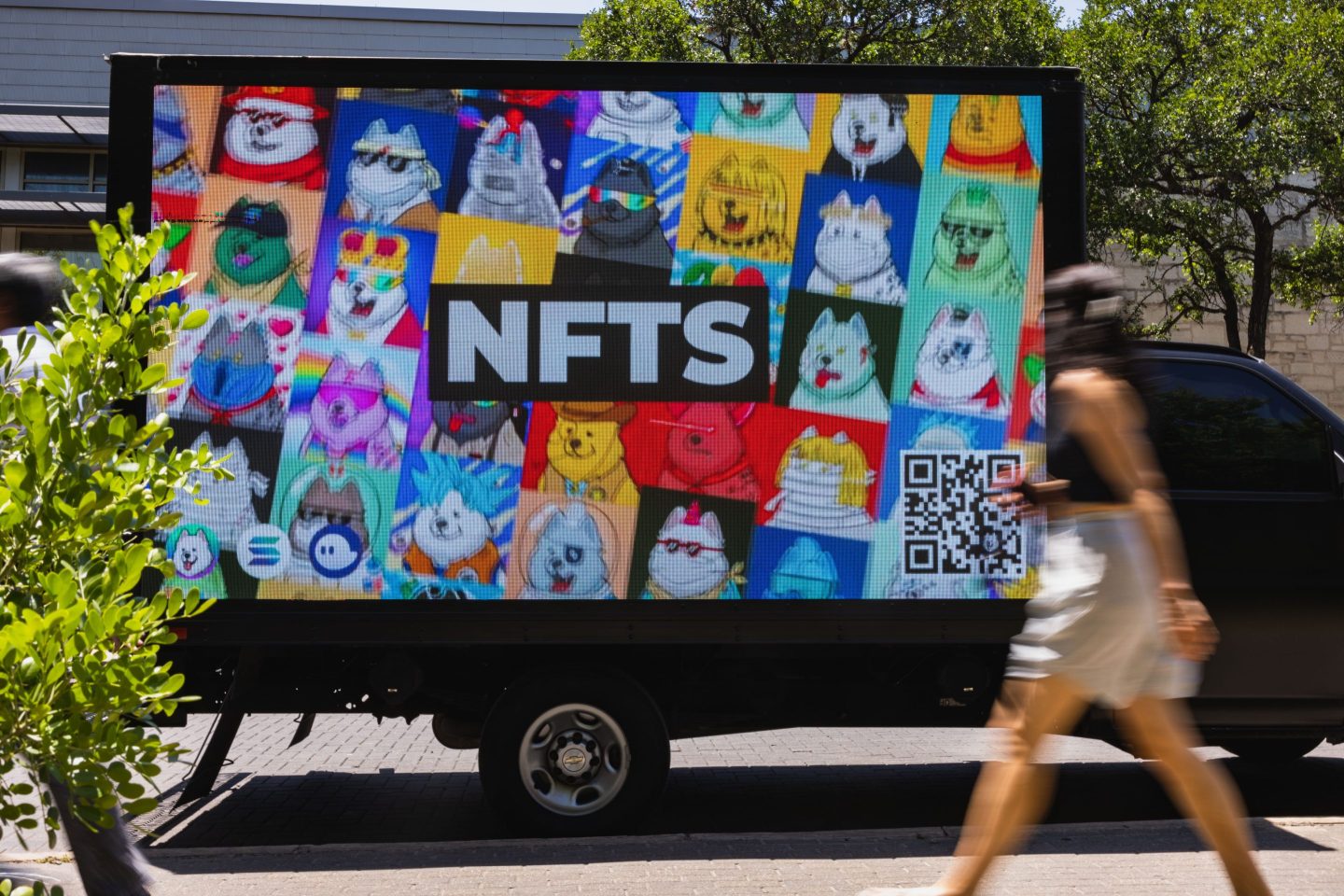 News of the day: Well, it’s pretty obvious by now, isn’t it? Just in case you missed it, though, Celsius Network, the crypto lender that froze customer withdrawals one month ago, has filed for Chapter 11 bankruptcy.

From sweatshirts on Amazon, to a burrito from Chipotle, to even guns, BNPL—that is, the point-of-sale financing method that allows shoppers to carve up a single payment into several smaller ones—has become about as unavoidable at the online checkout today as a pack of two Reese’s peanut butter cups has been at the grocery store register for decades.

And now, it’s entering into the vast and eclectic world of NFTs, too, in part through a new NFT financing and lending startup called Supermojo that just raised $6 million in seed funding from investors including BH Digital, DRW Venture Capital, Intersection Growth Partners, and Neuberger Berman, according to a press release set to be released Thursday that was shared with Fortune exclusively.

Launched by two former executives at Ripple—Amir Sarhangi and Craig DeWitt—Supermojo wants to make buying and holding NFTs easier, more reliable, and more accessible to the crypto experts, the crypto curious, and the crypto novices among us. NFT marketplaces have been opening their doors beyond crypto HODLers for some time, looking to cater to the legions of sports fans, music lovers, and real estate investors whose interests may align well with the technology behind the unique digital goods that are NFTs—even though they may not be the most crypto savvy. In April, OpenSea, the world’s largest NFT market, began accepting credit cards, debit cards, and even Apple Pay through a partnership with Moonpay.

But the process of buying an NFT with a credit card has been anything but great for many who have tried to do so, Supermojo CEO Sarhangi says. Credit cards tend to have hefty interest rates associated with them, and there have also been issues with transactions failing, as some credit card companies designate buying an NFT as a “crypto transaction” that they then block, he adds.

“We obviously saw the potential [in NFTs], but it was very difficult for the average users to access and buy an NFT,” Sarhangi, who was vice president of product and delivery at Ripple, tells Fortune. “What we’re doing is simply making it very easy for the average user to buy and hold an NFT.”

Supermojo plans to partner with marketplaces and storefronts so that investors can elect at checkout to buy the NFT through installment payments just like a shopper could purchase a new microwave on Amazon for four payments of $50 over the course of two months. The company will also offer the ability for owners to take out a loan against their NFTs.

The company does not plan to charge interest or late fees on its customers’ BNPL payments, Sarhangi says. Instead, it’ll take a fee upfront, a part of which may end up being paid for by the end buyer while the other is paid for by the marketplace itself. Until the payments are completed, Supermojo will hold the NFT on the buyer’s behalf, though Sarhangi says the team is working on an option that would allow an owner to sell the NFT and pay back the remainder of their outstanding payments at the same time.

Others within the cryptoverse have been building out BNPL and collateralized lending services for NFTs as well, even as the market has soured in the 2022 crypto winter. Just a week ago, for instance, Teller, a decentralized finance lender, revealed that it was launching a new participant-driven service dubbed “Ape Now, Pay Later” to give investors a chance to split up their purchases of popular NFTs such as Bored Ape Yacht Clubs, Bloomberg reported last week. Investors, meanwhile, have been using NFTs as collateral on loans for months now. But Sarhangi says few have made ease of use for everyone and anyone a tentpole of their services.

Granted, BNPL is not without its skeptics. In Washington, D.C., regulators have already been examining some of the largest BNPL providers‘ business models. And many consumer advocates are growing concerned about the amount of subprime borrowers using BNPL services and loading up on debt that they cannot afford to actually pay off. (About 43% of BNPL applicants had subprime credit scores, according to a May study from TransUnion.)

Supermojo, for its part, is not dolling out BNPL services to anyone. Users are not anonymous to Supermojo, as it requires applicants to complete an onboarding process that includes an eligibility check, says DeWitt, the company’s head of product and engineering. Sarhangi adds that the company is specifically focused on users with prime and super prime credit scores—meaning above a 660, per the CFPB. And even within that cohort, Sarhangi sees Supermojo as offering far more than just the marriage of two buzzy financial phenomena from the COVID-19 pandemic. Rather, the Supermojo CEO says the introduction of BNPL directly onto NFT marketplaces will be an upgrade over what’s available today, considering the lack of transparency around credit cards and the appetite for it among investors.

“BNPL has become a part of the fabric of the younger generations’ [lives]. It’s something that a lot of marketplaces need to provide as an option because it can be safer for the buying process,” Sarhangi says. But he adds, “It’s got to be done in a responsible way.”

The crypto deal spree is imminent.

Visa and Mastercard are working toward a future where you can buy lunch with crypto.

Zhu Su of Three Arrows Capital accused liquidators of "baiting" in a tweet after weeks of silence.

Investing legend Charlie Munger is still no fan of crypto.

A phishing attack led one Uniswap user to lose more than $8 million worth of Ether.

Libra and Diem and Aptos, oh my! The company formerly known as Facebook, Meta, has been trying to crack into the crypto business for literally years at this point. Its venture, first called Libra before being renamed Diem, was designed to become a crypto payments network built around a stablecoin. And yet, thanks to a barrage of concerns in Washington, D.C. about the idea of Facebook becoming even more powerful, the project never managed to achieve the vision it set out for. By the time 2022 came around, its top executive had departed and the company was on the brink of selling its intellectual property and other assets to Silvergate Bank.

Watching it all were Mo Shaikh and Avery Ching, two Metamates who worked on Diem as well as the company's crypto wallet, Novi. So, when it had become apparent that Meta's crypto ambitions may be able to find new life outside the company, they leapt at the chance, standing up what is now known as Aptos, a layer-one blockchain that, if all goes to plan, will act as a "safer and more scalable base for builders of things like NFT projects, social media, and DeFi, or decentralized finance," my colleague Anne Sraders writes in a new profile of the Meta team behind it.

With ex–Big Tech founders, promising technology, and the top VC backers in crypto (in addition to Multicoin, the startup also attracted Andreessen Horowitz, or a16z, Katie Haun, Tiger Global, FTX Ventures, and others) to raise its March $200 million round, Aptos Labs appears to have many of the ingredients for a recipe for success in the space. The startup raised funds at a valuation that’s reportedly between $1 billion and $2 billion, and currently has about 60 employees (the company declined to comment on its valuation).

But in addition to the rapid and disastrous descent of the crypto market over recent weeks, the startup is facing another, more direct problem: In early March, the company and CEO Shaikh were hit with a hefty lawsuit. Shari Glazer, an entrepreneur and philanthropist whose family is the Glazer family, which owns NFL team the Tampa Bay Buccaneers and English football club Manchester United, claims along with her firm Swoon Capital that Shaikh and Ching weren’t the only founders of the startup. Instead of Ching, she claims, she was a “50/50” partner with Shaikh in the venture, entitled to half the startup’s “founder’s shares” in equity—what she claims is at least $1 billion.

Venture capitalists pulled back considerably from new crypto investments in the second quarter, dropping $6.76 billion during the three month stretch compared with $9.85 billion in the first quarter—a 31% decline, according to PitchBook data.

'I'm out millions of dollars': Thousands of crypto investors have their life savings frozen as Voyager files for bankruptcy protection by Taylor Locke

Not only is crypto a financial risk, but stablecoins could cause 'contagion effects,' Europe's central bank writes in a blistering Web3 report by Will Daniel

Bank customers demanding their money back staged China's largest protest in years. The violent episode is the 'tip of the iceberg' of China's looming banking crisis by Grady McGregor

Where in the world are the Three Arrows Capital founders? by Taylor Locke

Inflation is so wild a late-night NYC crowd caused $25,000 in damages and hurt an employee over a $1.75 upcharge on dipping sauce by Alena Botros

Non-fungible token. So, what is an NFT? In your head, you're surely thinking of some colorful picture of an ape, a penguin, or LeBron James dunking, and you're not wrong. Whether it be Bored Apes, Pudgy Penguins, NBA Top Shots, the world of NFTs is far reaching and eclectic as ever. But what are all of these really? Any good news story about NFTs will provide you the 30,000-foot-view descriptor of a digital collectible stored on the blockchain. Or, in other words, NFTs are "coded references to one-of-a-kind virtual goods that are logged on a blockchain," which, of course, is the distributed ledger that Bitcoin, Ethereum, and other cryptos run on, as my former colleague Robert Hackett explained last year. Take that NFT of the Mona Lisa you bought last year, for instance. You do not own the Mona Lisa—even if you did drop the U.S. dollar equivalent of a few hundred thousand on it. Rather, you own a "unique digital item," Coinbase and Paradigm cofounder Fred Ehrsam explained last year to Vanity Fair. In this case? A digital copy of the Mona Lisa. But the possibilities of NFT technology, per its most ardent supporters, go well beyond that. "Today it's mostly digital visual art, but they can—and will—apply to anything digital: music, writing, video game items, and more. NFTs have authenticity because creators sign them digitally, similarly to how an artist would sign a physical painting," Ehrsam said.