Bank customers demanding their money back staged China’s largest protest in years. The violent episode is the ‘tip of the iceberg’ of China’s looming banking crisis 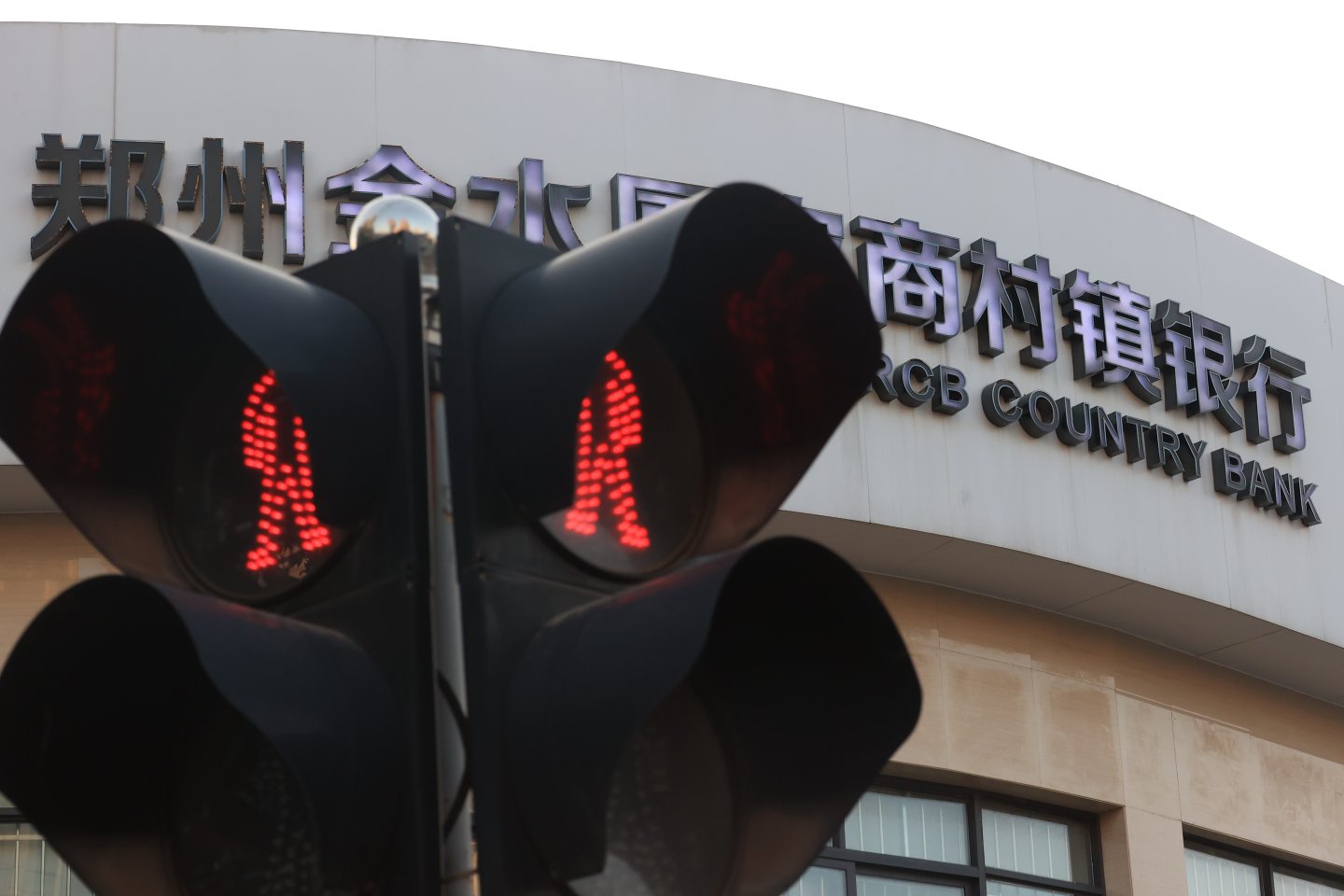 A view of an outlet of a rural bank in Zhengzhou city in central China's Henan province on June 17, 2022. Protesters have targeted banks in the city, demanding access to their life savings.
SHANG JI--Feature China

Late Monday night, frustrated bank depositors in China’s central Henan province appeared to secure a victory from their local government after months of complaints and public demonstrations. Henan authorities announced that starting on Friday, the bank depositors would be able to withdraw up to $7,442 from accounts that have been frozen since April.

Authorities made the apparent concession after hundreds of bank depositors in Henan’s capital of Zhengzhou engaged in the largest demonstration in years in China, where protests are rare under the authoritarian political system but not unheard of. The day before, hundreds of people took to the streets of Zhengzhou to protest their inability to withdraw money from four local banks and to accuse local officials of corruption and mismanagement. The demonstrations turned violent when a group of unidentified men in white shirts attacked the peaceful demonstrators. (The local police did not intervene in the attack even though officers were nearby, according to the Washington Post.)

Chinese authorities appear to be pinning blame for the banking issues on a group of “criminals” in charge of the local banks. But economists say the issues facing rural banks in Henan run much deeper than a few bad actors as local governments face a cash crunch after years of debt-fueled growth.

The banking problems in Henan first emerged in April, when customers of the New Oriental Country Bank of Kaifeng, Zhecheng Huanghuai Community Bank, Shangcai Huimin County Bank, and Yuzhou Xin Min Sheng Village Bank discovered that they could not withdraw their funds from local banks. Thousands of depositors made the run on the banks after the government arrested Sun Zhengfu, the majority shareholder in “several of the banks,” for “serious financial crimes,” according to Chinese media.

After bank depositors complained to local media, China’s banking regulator announced an investigation into the banks in late April. But after weeks of still being unable to access their money, bank customers began to protest at local banks and government offices.

In response to the protests, local authorities in Henan weaponized China’s COVID-19 health code apps. In China, citizens use health code apps to gain access to nearly every venue outside their homes, from work sites to movie theaters. The QR code-based apps use a traffic light system. Green signals the user is at minimal risk of having COVID, yellow means moderate risk, and red indicates high risk and bans the user from entering businesses or public places.

In late May, bank depositors, some of whom did not even attend the protest, reported that their health codes had turned red after public demonstrations at the local banks.

China’s central government later accused local authorities in Henan of abusing the health code system by putting 1,317 people on the red health code list after the protest, according to state media. The central government ousted one local official, the director of Henan’s virus control department, and punished four others with “administrative sanctions” for the violation.

But even after China’s government punished the officials, bank customers remained frustrated; they still couldn’t withdraw their funds.

The outrage culminated in Sunday’s protest with hundreds of bank depositors from rural parts of the province converging on Henan to demand their money back. The demonstrators earned sympathy online from social media users across the country as videos of the demonstrations spread more quickly than government censors could take them down. “Why are you treating ordinary people like this?” a Weibo user asked in response to a video of the Sunday protest.

The tip of the Evergrande iceberg

China’s government has blamed the crisis on “criminal gangs” who supposedly took control of the four banks in 2011 and began manipulating executives. The government alleges that a man named Lu Yi, whose whereabouts are unknown, headed the “gang” as well as the scheme to attract depositors from across the country by falsely advertising high returns on investments.

The banking regulator on Monday said that while it would ensure that some depositors could receive their money back, it would not return funds to depositors engaged in criminal activities.

Some of the protesters are skeptical that the depositors will ever receive their funds. “It doesn’t solve the underlying problem. It looks like Henan really has no money,” one of the bank depositors surnamed Hang told Hong Kong’s South China Morning Post today.

SinoInsider, a U.S.-based risk consultancy, concurs. The group wrote last week that the problems in Henan are just the “tip of the iceberg of serious systemic and financial risks with small- and medium-sized banks in China.”

SinoInsider explained that other banks could soon face “similar problems” due to the “financial contagion from Evergrande’s debt crisis.”

Since last year, China’s government has targeted Evergrande, the bloated property developer, in a broader crackdown on property speculation and unsustainable levels of debt in the real estate sector.

The crackdown made it more difficult for property developers to borrow and therefore less able to purchase land offered for sale by local governments. Property sales are a crucial source of revenue for most provincial and municipal governments in China. Banks too were caught in the credit squeeze. The limits set by the central government forced many regional lenders to call in existing loans from property developers, many of whom were unable to make repayment. Economists say local, rural banks may be the most exposed to defaults compared to larger regional or national banks.

“Small banks are likely to take a bigger hit with more challenges in asset quality due to their higher exposure to real estate and [small and medium-sized enterprises],” Gary Ng, senior economist Asia-Pacific at Natixis, recently told S&P Global.

The run on banks in Henan may just be the start of a broader banking crisis.

“The past two decades in China have seen a real estate bubble of historic proportions, along with among the fastest increases in debt ever seen,” Michael Pettis, a professor of finance at Peking University recently tweeted. “This means that what is happening in Henan is simply part of a process that has many years to continue before it is resolved.”