Google Search is in danger of losing Gen Z. Here’s how the company is responding 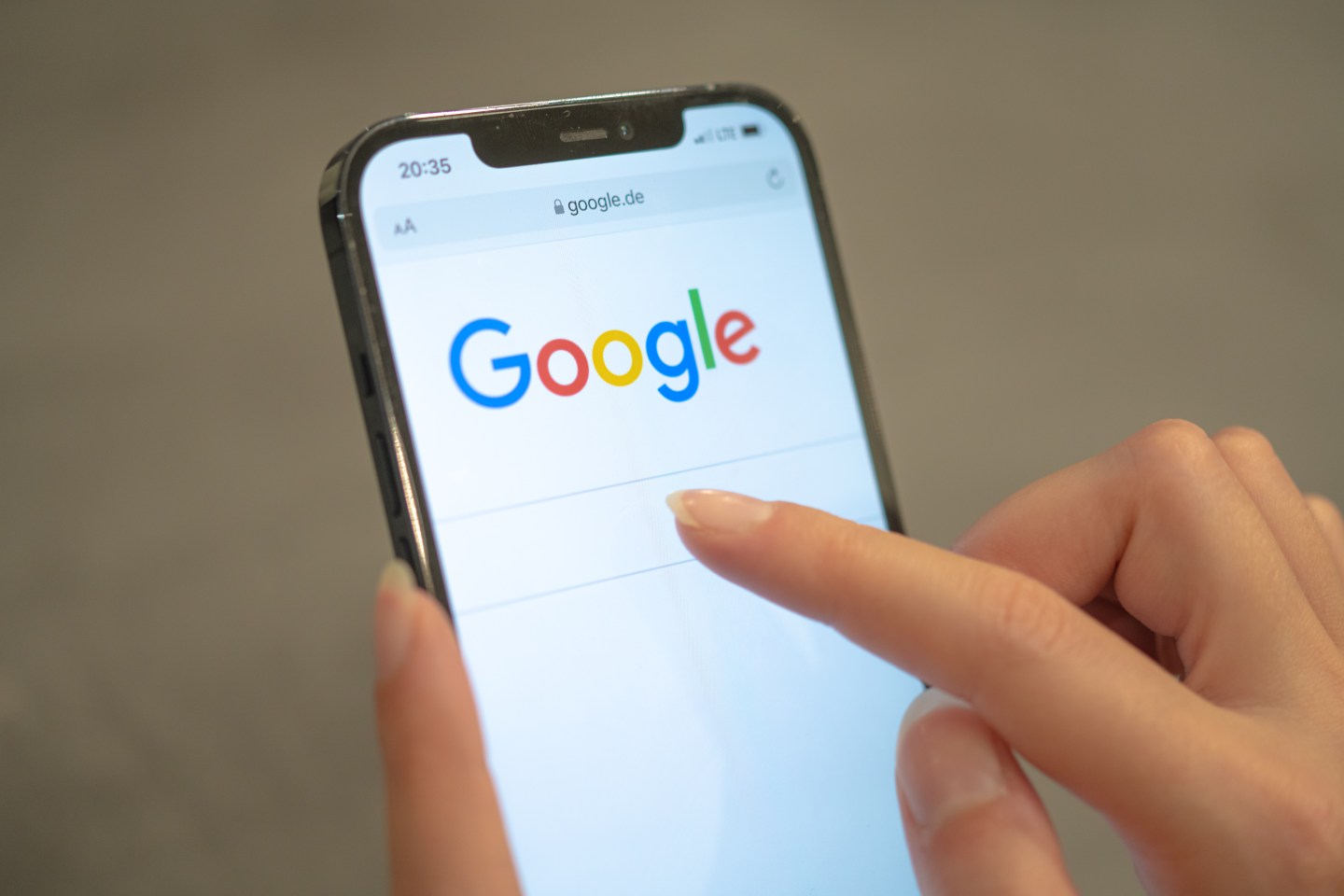 Internal research by Google suggests that its search engine is losing out to TikTok and Instagram among Gen Z.
Mohssen Assanimoghaddam/picture alliance via Getty

Three weeks ago, I threw a tiny tantrum in this space about Google Search, airing my frustrations about its evolution into an overcrowded, SEO-driven vestige of its former self.

Turns out, maybe I’m just too much of an old fogey to appreciate its progression.

It’s a theory I had to contemplate Wednesday after listening to comments made by Prabhakar Raghavan, a Google senior vice president, during Fortune’s Brainstorm Tech conference.

Raghavan, whose numerous responsibilities include oversight of Google Search, touched on an interesting topic that might go unnoticed to longtime users of the ubiquitous tool: how young people interact with search engines.

For those of a certain age, we’ve become accustomed to a certain rhythm to Google Search. Often, that involves entering a term or phrase, then scrolling through text to find a pertinent link.

But that’s not how the kids these days have been brought up on the internet, Raghavan said. They’re far more attuned to pictures and videos, and don’t arrive with “preset expectations” for what the World Wide Web should look like.

To prove his point, Raghavan cited a fascinating piece of internal research.

“Something like almost 40% of young people, when they’re looking for a place for lunch, they don’t go to Google Maps or Search,” Raghavan said. “They go to TikTok or Instagram. The journey begins in different forms than before: visual image forms.”

Google confirmed to TechCrunch that Raghavan was referring to an internal, non-public survey of U.S. users between the ages of 18 to 24.

The comments underscore the long-term pressures weighing on Google’s Search business from social media competitors, which also boast user bases reaching into the billions and are increasingly harnessing their search capabilities.

“Google Search is losing particularly on the discovery use case,” Mostafa ElBermawy, CEO and founder of the brand marketing agency NoGood, wrote in a March blog post. “It’s no longer a product where people discover new brands, products, or experiences. Social is a better alternative here and particularly the rising giant, TikTok.”

Raghavan referenced advances in the company’s five-year-old Google Lens tool, which allows users to conduct a search using an image, rather than just text. He also highlighted new technology that helps users jump to specific points in a video based on their search entry (his example: speeding forward in a video on fixing a flat tire to the part about removing lugnuts). And he pointed to a recently rolled out augmented reality feature that helps users navigate confusing subway station exits.

“The underpinning of a lot of this is fairly complicated machine intelligence that very few people actually understand,” Raghavan said.

Those units have seen a nearly $50 billion increase in revenue since 2019, propelled in large part by “increases in search queries resulting from growth in user adoption and usage,” according to company filings.

Courting a fight. Twitter filed a lawsuit Tuesday seeking to compel the company’s $44 billion sale to Elon Musk, who is trying to back out of the deal amid a sharp decline in firm’s value. Twitter officials are seeking a four-day trial that would begin in September in Delaware’s Chancery Court, which often adjudicates complex merger and acquisition disputes in a swift manner. In a blistering complaint, lawyers for Twitter argued that the company has “bent over backwards” to accommodate Musk’s demands for information about the prevalence of bot accounts on its platform, the primary reason for Musk’s attempt to renege on the purchase.

All good things do end. The history-making, three-decade partnership between Apple and design executive Jony Ive, who combined to produce the visually striking iPhones, iMacs, and Apple Watches, will soon come to an end after the two sides couldn’t reach a contract extension, The New York Times reported Tuesday. Apple employed Ive between 1992 and 2019, at which point he left to start his own design firm, LoveFrom. Ive continued to work with Apple on a contractual basis, but his fees and desire to break free from Apple’s competition-related restrictions on his business led to the split, the Times reported.

Take it down a notch, HR. Google plans to slow its hiring pace for the rest of 2022 due to the “uncertain global economic outlook,” Alphabet CEO Sundar Pichai said in an email to staff members Tuesday, Bloomberg reported. Pichai added that Google, a division of Alphabet, will focus on hiring “engineering, technical and other critical roles” in the second half of 2022 and in 2023. Google hired about 10,000 employees in the second quarter of 2022, Pichai said.

Some unhappy campers. Lina Khan’s quest to curb the power of Big Tech giants was always going to be a huge challenge. Now the Federal Trade Commission chair is dealing with another hurdle: declining employee morale. Annual rankings of federal employee happiness show that the FTC, which once ranked among the best agencies to work at, saw a huge drop in employee satisfaction in 2021, The Washington Post reported. The FTC fell from the second-highest rated midsize agency on the 2020 survey to the fourth-lowest rated out of 24 agencies in 2021, the year that Khan took the reins. Employee morale at the FTC is particularly important, given that many of its lawyers, technical experts, and other staff could make more money in the private sector.

The agency’s plunge comes on the heels of Khan’s tumultuous first year in office, which has been blunted by partisan divisions, limited resources and an ever-expanding political agenda — with the FTC facing pressure from the White House to act on a disparate array of issues including reining in gas prices and protecting health data in the fallout of the Supreme Court’s abortion decision.

Khan’s critics attribute the declining happiness to frustration with Khan and her allies’ public discontent with the FTC’s track record. Shortly after Khan’s confirmation, Biden referred to the last 40 years of competition policy as a “failed” experiment. FTC spokesman Peter Kaplan has said that the surveys reflect a period of considerable change, which is “always difficult,” and that she has “enormous respect” for FTC workers.

‘Unicorn’ CEOs voice uncertainty amid the current economic downturn: ‘Make sure you have enough runway for three years’, by Lucy Brewster

13 fateful tweets: How Elon Musk’s own addiction to Twitter may be used to slap him with his biggest defeat, by Christiaan Hetzner

Former Twitter employee tells Jan. 6 committee Trump would have been banned long ago if he were ‘any other user’, by Alena Botros

When it comes to regulating A.I., rules are good. Enforcement is better, by Jeremy Kahn

What consumers are buying on Amazon Prime Day—and how much they’re spending, by Haleluya Hadero and The Associated Press

The fog of rhetorical war. Aides to San Francisco Mayor London Breed might want to keep this article out of her press clippings. Three speakers at a Fortune Brainstorm Tech panel Tuesday debated the future of The City in light of the remote work shift—and 8VC President Drew Oetting, who leads a technology and life sciences venture capital firm, minced no words with his analysis. “San Francisco is probably the worst-run city in the United States," Oetting said, pointing to the government’s homelessness issues, public schools, and pandemic response. Moment CEO Lucy Guo took a more diplomatic approach by singing the praises of Miami, where she now lives. And Bloomberg Beta head Roy Bahat came to the defense of San Francisco, noting its dense concentration of high-class universities and top-flight tech companies.