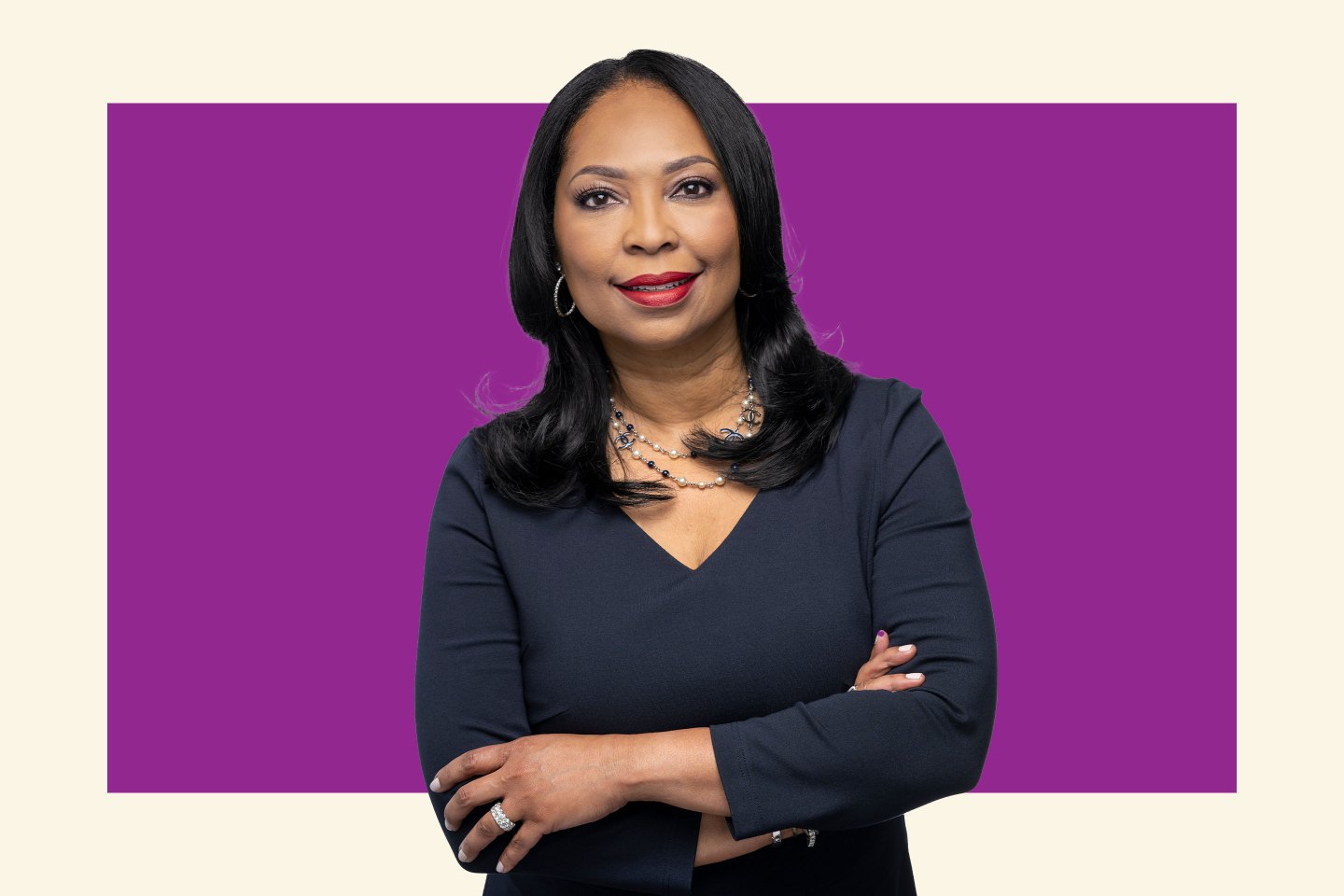 – Health equity. Patricia Lewis joined UnitedHealth Group as chief human resources officer in 2019, after a career at IBM and Lockheed Martin. Stepping into a new industry, she knew she wanted to address racial inequities in health care—especially the maternal mortality gap between Black women and women of other races.

The issue is personal to Lewis, who in February transitioned to a new role as UHG’s chief sustainability officer, a position that encompasses the Fortune 500 company’s health equity and diversity goals. In 2001, she gave birth to her now 21-year-old son at age 39. The pregnancy was considered higher-risk because of Lewis’s age and because she has the sickle cell trait, which about one in 13 African Americans carry.

“After his birth, I started to hemorrhage,” Lewis remembers. Her doctor at the North Carolina hospital where she gave birth was also a Black woman, and Lewis credits that physician and their shared identity with saving her life. “The hemorrhaging was associated with me having the sickle cell trait. The fact that she understood that and jumped in essentially could have saved my life. Having a doctor with her background—the cultural sensitivity around the trait itself and its impact on African American women—it just helped.”

“She listened to me,” Lewis recalls. “She did the due diligence around my medical condition. We had pre-birth conversations around what could happen. She had the competence to know what to do without hesitation.” But she knows most Black mothers don’t have that experience. Her own family member had a very different experience when she gave birth about 25 years ago in the Bronx at 18 years old. “She had preeclampsia,” Lewis says. “The physicians in her case, they didn’t listen to her very well. They sent her home when she still wasn’t feeling well, and she wound up in the emergency room with a very serious infection.”

These experiences led Lewis to prioritize diversity in hiring as CHRO. UHG is one of the largest health insurers in the U.S., with $287 billion in revenue last year. While much of the company’s business is in health insurance, it does employ 137,000 clinicians directly, largely through its Optum business. “I’ve worked on attracting talent from diverse backgrounds so they can actually serve the health care system in a culturally competent way,” she says. (The company points to an increase in representation of people of color in senior management roles from 11% to 16% between 2020 and 2021, but didn’t provide such data for its clinical workforce.) In her new position, much of her work on the issue is through philanthropic partnerships; UHG provided $9 million in grants last year to organizations addressing maternal and infant health.

The Supreme Court’s decision overturning Roe v. Wade will, of course, affect maternal health outcomes as a growing number of states enact abortion bans. Without speedy access to abortion care, women’s lives will be put at risk. Lewis declined to comment on the issue in depth. “We’re still trying to work in that space to figure out our overall approach,” she says.

As Lewis has delved deeper into the issue of Black maternal health in her professional life, she’s discovered just how common bad outcomes are. While she prepared for a recent presentation on Black maternal health with a group of UnitedHealth Group colleagues, she found that two coworkers in the room knew Black women who died in childbirth. “That’s how prevalent this is—the three of us in that room had that experience,” she says. “It’s all too common.”

Broadsheet readers: Yesterday, we published a feature in which 14 business leaders shared their personal abortion stories. Their stories help to destigmatize abortion and make clear how common the procedure is. We heard from many of you that the piece resonated with you. So, a callout: if you’d like to share your own experience with abortion to add your voice to this effort, email emma.hinchliffe@fortune.com. Include whatever level of detail you are comfortable with about your experience—how you felt, what was going on in your life at the time, and how you accessed care—but try to include the year, location, and your age at the time if possible. Please say how you’d like to be identified: by full name, by first name and last initial, or anonymously. Your note may be featured in a future edition of the Broadsheet, with your permission. Thank you so much. It’s an honor to amplify your stories.

- In cold blood. Theranos's ex-president Sunny Balwani was found guilty of all 12 fraud charges related to his involvement in the failed blood-testing company on Thursday. Jurors concluded that the businessman and former boyfriend of Theranos founder Elizabeth Holmes conspired with Holmes, defrauded investors, and committed patient fraud. Holmes, by contrast, was convicted of defrauding investors but found not guilty on the patient fraud charges. Both former executives await sentencing. Bloomberg

- Now in court. WNBA star Brittney Griner pled guilty to drug charges in a Russian court on Thursday. Griner told the court she’d packed her suitcase in a hurry and that "there was no intent" to smuggle the hashish oil found in her luggage. Her next hearing date is scheduled for July 14, and she faces up to 10 years in prison. Her family and supporters in the U.S. have urged the White House to take action to get her home. Wall Street Journal

- Toll of war. Ukrainian first lady Olena Zelenska is on the cover of Time. In an interview, she describes putting her work as first lady and a comedy screenwriter on hold at the onset of Russia’s invasion of Ukraine. Since the war's outbreak, she's launched an initiative to provide psychological support to Ukrainians dealing with PTSD despite Soviet-era stigma against seeking mental health support. Time

- Culture clash. Netflix has long prided itself on a friendly culture and openness between staff and executives. But the controversy over transphobic jokes in Dave Chappelle’s comedy special The Closer helped bring those days to an end. Employees say that the Netflix culture is now top-down, with little room for feedback from employees. One example is a company Google doc, where all staffers were encouraged to pose questions to executives; many questions now go ignored. Vulture

- Eyes on the midwest. Three races to keep an eye on after Roe's reversal: this year's gubernatorial elections in Michigan, Pennsylvania, and Wisconsin. Those governors will determine the future of abortion access in the three states and influence how their states vote in the 2024 presidential election. Intelligencer

- Who decides? Some states' new abortion bans carve out exceptions to the ban to save the life of the pregnant person. But not everyone agrees on what constitutes "life-saving" care. Some doctors fear that ending an ectopic pregnancy, in which the fertilized egg latches outside the uterus, could result in the loss of their license or criminal prosecution. Some are now consulting with hospital lawyers before performing procedures, further putting patients at risk. Time

- Outdoors for all. People of color have long been excluded from outdoor recreational spaces, but over the last three years, the number of Black and Hispanic people participating in outdoor activities has grown. Several organizations focused on providing people of color safe access to outdoor activities have sprung up across the country. “There are so many people around the country who just want to feel a sense of belonging and be able to tap into the healing energy of a collective safe space outside,” says Evelyn Escobar, the founder of Hike Clerb. New York Times

What happens to Christian influencers when they get married? BuzzFeed

“Breaking the trend… I joined the wall of former Chief Economists of the IMF.”

-Gita Gopinath, posing with her photo hanging next to images of other former IMF chief economists—all men. Gopinath served in the role from 2019 to 2022 before being promoted to deputy managing director.