Corporations ‘opportunistically’ raised prices in 2021 which fueled inflation, according to new research 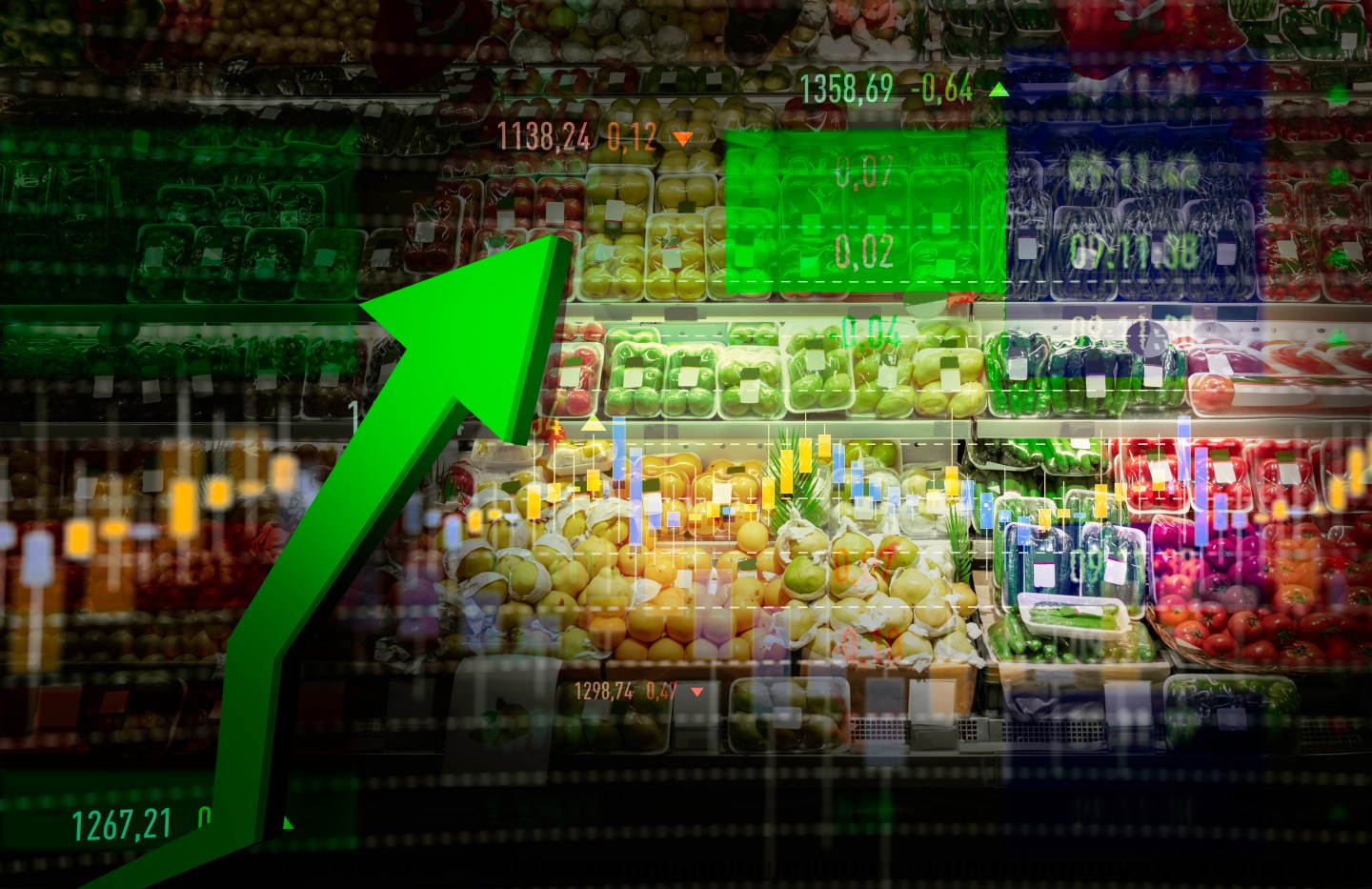 There’s a fascinating debate playing out about markets, prices and inflation. Do companies raise prices because they have to, in order to keep pace with inflation? Or, sensing an opportunity to notch higher profits, do they take advantage of an inflationary environment to raise prices, thereby fueling inflation?

New research suggests, at least this time around, the latter scenario may have played out.

“Profits are at the highest level since we have the data to measure that in a formalized way, in the 1950s,” says Mike Konczal, director of the macroeconomic analysis program at the Roosevelt Institute, a N.Y.-based left-leaning think tank. He is a co-author of the report, Prices, profits, and power. A finding: net profit margins increased from a yearly average of 5.5% from 1960 to 1980 to an average of 6% during the 2010s, then to 9.5% in 2021.

Higher markups do not necessarily translate to higher profit margins (operating or net margins), but they did in 2021. Markups in 2021 were “both the highest level on record and the largest one-year increase—over 2.5 times the increase of the next several largest annual increases,” the report states. The findings are based on data, such as companies’ SEC filings and shareholder reports, collected by Compustat of publicly traded firms between 1955 and 2021. “This gives us an initial 586,504 firm-level observations, with 11,490 from firms in 2021,” according to the report.

From the Roosevelt Institute report, Prices, Profits, and Power

The report explains how supply and demand certainly contributed to inflation and markups across industries in 2021. But the researchers also analyzed pre-pandemic markup trends. “Firms that were already at the top of the distribution in 2019 increased their markups even more,” Konczal says. “You could think of it as the rich getting richer. Firms that were already very profitable profited even more.”

He continues: “I think it’s a small part of the story, but it’s a really important part that corporations opportunistically raised prices in 2021,” Konczal says. “It’s useful to know what happened, as a factual matter. There are also equity concerns that these profits aren’t going to be invested [but] just going to be given away in bonuses to shareholders.”

He continues, “Now, some economists might disagree that firms with high markups in 2019 necessarily had market power or were in a position of strength in the economy, and that’s a very big debate. But there’s something going on with firms with very high markups right before the crisis, and whatever it was that allowed them to increase more. I would like to see more investigation into this.”

There has been some debate on this topic. For example, in a tweet last week, President Joe Biden called on gas companies to lower prices at the pump: “Bring down the price you are charging at the pump to reflect the cost you’re paying for the product.” But that was met with pushback by Amazon founder Jeff Bezos. “It’s either straight ahead misdirection or a deep misunderstanding of basic market dynamics,” Bezos posted on Twitter in response to Biden’s tweet, Fortune reported.

I asked Konczal his thoughts on the debate, but he demurred. “So, President Biden and Jeff Bezos going back and forth about gas stations is outside my body of knowledge,” he said.

Have a good weekend. See you on Monday.

Mastercard SpendingPulse measures in-store and online retail sales across all forms of payment. The June SpendingPulse found that total retail sales (except for auto) increased 9.5% year-over-year (YOY) in June and up 20.8% compared to June 2019. Total retail sales (excluding auto and gas) rose 6.1% YOY, up 17.1% from June 2019. E-commerce grew at a slower pace in June (1.1% YOY); meanwhile, in-store sales increased 11.7% YOY. The report also found that consumers are paying more for essentials as inflation persists. "Two of the categories that have higher inflation have seen a lift in sales: June sales for fuel and convenience are up 42.1% YOY and grocery 14% YOY," according to the report.

In case you missed it, here’s what was featured in CFO Daily this week:

Crypto exchange Binance.US hires Acorns and PayPal alum as CFO on its path to an IPO

CFO resumes are changing: ‘In the ideal world everyone would be a CPA’

Diana Saadeh-Jajeh was promoted to CFO at GameStop Corp. (NYSE: GME), effective immediately. Saadeh-Jajeh replaces Michael Recupero, who was terminated by the company. Recupero joined GameStop in July 2021. Saadeh-Jajeh most recently served as SVP and chief accounting officer at GameStop.

Kate Burke was named CFO at AllianceBernstein Holding L.P. (NYSE: AB), effectively immediately. Burke assumes CFO role while maintaining her role as COO. She has stepped down from her role as head of Bernstein Private Wealth. Onur Erzan, AB's Head of Global Client Group, has been appointed to that role. Burke succeeds interim CFO Bill Siemers, who will return to his prior role as corporate controller and chief accounting officer.

Dermot McDonogh was named CFO at The Bank of New York Mellon Corporation (“BNY Mellon”) (NYSE: BK), effective Feb. 1, 2023. McDonogh will join the company on November 1. Emily Portney will continue serving as CFO through Jan. 31, 2023. Portney will assume a new role leading the company’s Treasury Services, Credit Services, and Clearance and Collateral Management businesses. McDonogh joins BNY Mellon from Goldman Sachs, where he has worked for over 25 years, most recently as chief operating officer for EMEA and CEO of Goldman Sachs International Bank.

Vinay Singh was sworn in as CFO at the U.S. Department of Housing and Urban Development on July 5. Singh previously served as a senior advisor to the administrator at the U.S. Small Business Administration (SBA). Prior to his role at SBA, Singh was a partner and chief operating officer for the infrastructure practice at KPMG in India. Additionally, Singh was a lead partner for the World Bank Group account; he supported global sustainability projects. Previously, he served in the Obama-Biden Administration as a deputy assistant secretary (U.S. Field).

Donna Blackman was promoted to CFO at Stride, Inc. (NYSE: LRN), a provider of itech-enabled education solutions. Blackman has served as Stride’s chief accounting officer and treasurer for the past two years. She will replace outgoing CFO Timothy Medina, who is retiring. Before joining Stride in 2020, Blackman served as the SVP of business operations at BET Networks, a subsidiary of Viacom. During her tenure at BET, Blackman also held roles as SVP and head of finance, SVP of financial planning and analysis, and SVP of finance and controller.

Jillian B. Thomsen was promoted to SVP and CFO at Nektar Therapeutics (Nasdaq: NKTR). Gil Labrucherie, the company’s current COO and CFO, will be departing the company to pursue another opportunity at a private biotechnology company. In April 2008, Thomsen was appointed chief accounting officer at Nektar. From 2006 to 2008, she served as VP of finance and controller of Nektar. Before joining Nektar in 2006, Thomsen was deputy controller of Calpine Corporation. She started her career serving twelve years in Arthur Andersen LLP’s audit and business advisory services practice.

“I want you to know how sad I am to be giving up the best job in the world, but them’s the breaks.”

—U.K. prime minister Boris Johnson said during his resignation speech on Thursday. Before Johnson stepped down, "no fewer than 59 members of his government departed in the space of some 48 hours: a mass exodus that made history books and boosted U.K. currency and stock price in the process," Fortune reported.