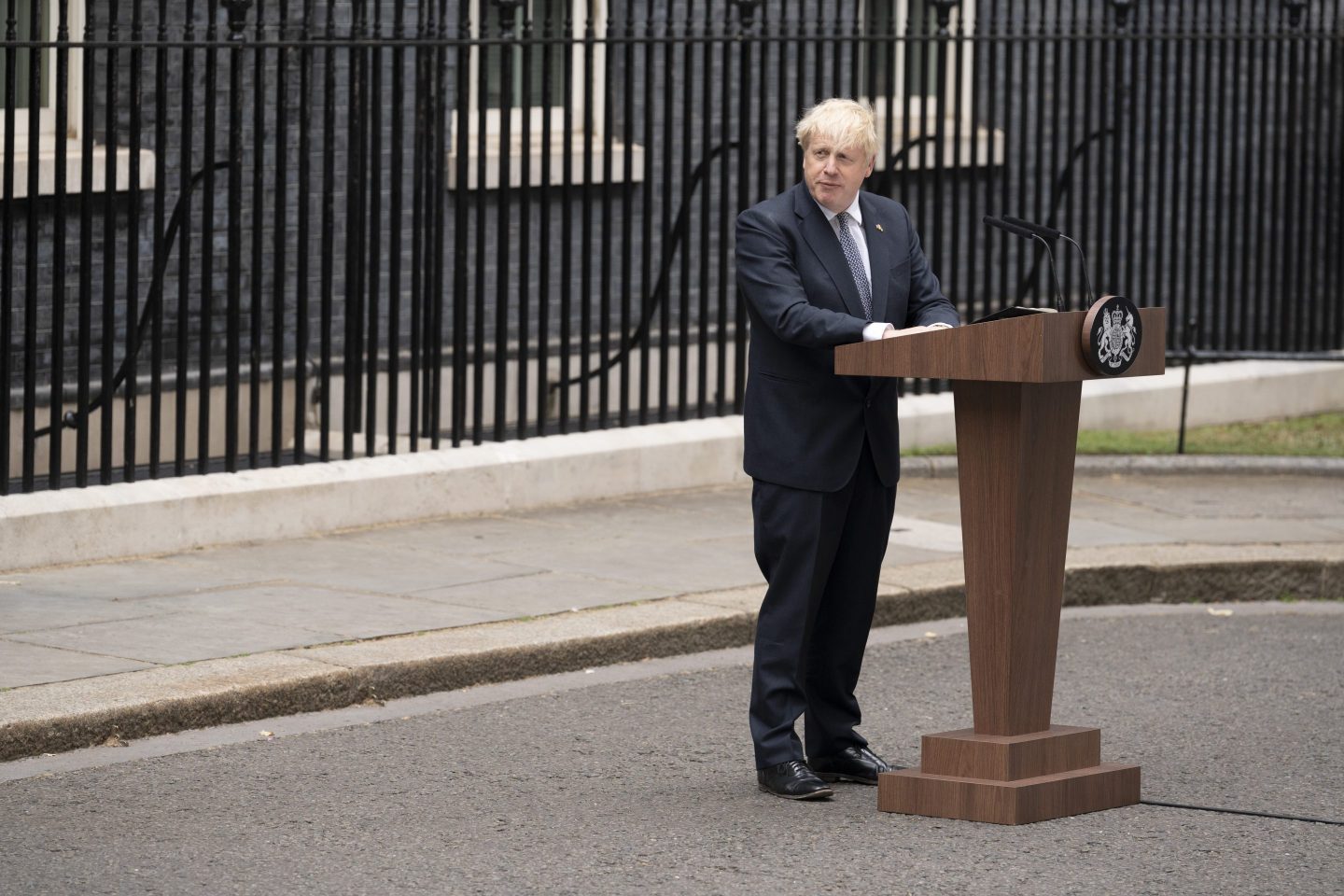 After squeaking through scandal after scandal, U.K. prime minister Boris Johnson finally resigned, having taken his country to the very brink of a full-blown constitutional crisis.

Before he fell on his sword, no fewer than 59 members of his government departed in the space of some 48 hours: a mass exodus that made history books and boosted U.K. currency and stock price in the process.

Among the leavers were several of his most senior cabinet secretaries—two of whom had only been in the job for a day.

“I want you to know how sad I am to be giving up the best job in the world, but them’s the breaks,” Johnson said in a TV address on Thursday. “Our brilliant and Darwinian system will produce another leader equally committed to taking this country forward through tough times.”

The signs of his impending collapse could be seen for weeks—if not months—before his premiership imploded in spectacular fashion.

A litany of corruption and sex scandals too numerous to list overshadowed several key milestones, including the U.K.’s departure from the European Union two years ago, one of the fastest vaccine rollouts in the world, and unwavering support for Ukraine in its war against Russian invaders.

Johnson presided over an unparalleled decline in political norms and standards, with two of his ethics advisers quitting over three years.

Right at the beginning of his term, he tricked the Queen into preventing Parliament from holding session, since it planned to block his Brexit legislation.

This penchant for lying to people for political expedience proved a constant during his term, with an inquiry scheduled this fall into whether he knowingly misled Parliament over a series of rule-breaking parties at Downing Street.

That alone could have brought the curtains down on his premiership.

Why did he resign?

In the end, a botched cover-up of misbehavior by Chris Pincher—a relative nobody outside of Westminster circles—proved to be the last straw.

The Christopher Pincher scandal was the straw that finally broke the camel’s back.
Thierry Monasse—Getty Images

It was revealed Johnson lied about not knowing the MP had a reputation for drunkenly groping men when he made him deputy chief whip, a job that also requires investigating complaints over sexual harassment in internal ranks.

Effectively Johnson put a fox in charge of the henhouse.

This came to a head when his lies were laid bare by a former aide, Simon McDonald, and prompted the resignations only minutes apart of two of his most senior and respected cabinet ministers, Health Secretary Sajid Javid and Chancellor of the Exchequer Rishi Sunak. Dozens of junior government MPs followed.

Already when Johnson ascended to power in late 2019, there were deep misgivings over his suitability for the job.

Sacked as a journalist for the London Times for inventing a quote, he fabricated stories about EU overreach for the euro-skeptic Telegraph, such as supposed bans of a beloved flavor of U.K. potato chip or irregularly shaped bananas.

He was also fired as a junior minister for lying about an affair.

Later as London mayor, he spent taxpayer money to further the ambitions of his American mistress, Jennifer Arcuri.

As prime minister, it emerged Johnson nearly wrangled his future wife Carrie Symonds a well-paid government job under him in the foreign office until aides, who knew about their affair, stopped it. At the time his legal spouse was sick battling cancer.

Yet Johnson possessed an uncanny ability to tear constituencies away from the opposition, thanks to his everyday appeal to working-class Brits in Labour’s own northern stronghold.

In reality Alexander Boris de Pfeffel Johnson (his full given name) had little in common with them. He was born in New York, grew up in Brussels, and later attended the private boarding school Eton, where he and former prime minister David Cameron were part of the notoriously elitist Bullingdon Club.

While affable and never afraid to embarrass himself, Johnson earned a reputation for laziness, caring little for policy.

Instead he preferred grand announcements—the more outlandish the better, like building a bridge that would impossibly connect Northern Ireland to mainland England. Everything he did had to be “world-beating.”

Real trouble for Johnson first began late last year when he tried to change parliamentary rules to protect a corrupt Tory MP, Owen Paterson, found to abuse his office by pocketing money to lobby on behalf of a client.

Since Johnson himself was under investigation for decorating his Downing Street flat with sinfully expensive furnishings paid for by a Tory donor, the implication was that Johnson would abuse his majority to escape any punishment.

After a storm of outrage, the PM abruptly backpedaled and cut him loose, but the damage was done: Paterson resigned, his safe seat in a constituency that for 200 years had voted conservative flipped to the opposition, and Tory sleaze became part of the country’s daily vocabulary again.

It was, however, the scandal known as Partygate that turned the population against Johnson and effectively prevented him from returning to his key legislative agenda post-Brexit: leveling up England’s more impoverished north.

Leaks emerged that during the strict lockdowns Johnson and his team hosted all sorts of law-breaking parties that he himself attended. Each time he denied it to Parliament, and each time a new revelation laid bare evidence directly contradicting his assertions.

For the British, who suffered heavy COVID fatalities, a collective disgust rippled across the country.

No image better encapsulated that than the Queen herself solemnly seated alone during the funeral service of Prince Philip with no one to console her, just after a Downing Street party lasted into the morning hours.

Johnson’s residence became the most fined address in all of the U.K., and an internal investigation led by senior civil servant Sue Gray discovered a culture that rotted from the top down.

Despite calls for his resignation, he soldiered on, taking no heed of polls that showed he had long since lost the backing of the British people.

Prior to Johnson, no sitting PM had ever been found guilty of a crime.

When trouble invariably arose, he would stir up a fight with the EU to appease the powerful euro-skeptic wing of his party.

Lately when he needed a boost, he would jaunt off to Kyiv to bask in the spotlight of his friendship with popular Ukrainian President Volodymyr Zelenskyy.

Initially it looked as if the PM escaped punishment after a standoff with his own Tory MPs resulted in winning a tense confidence vote. Instead of exhibiting humility and penance, however, he later boasted of plans to lead the party into the next decade.

Still Johnson said he would fight on, dancing around questions he might try to trigger a snap election with the Tories trailing Labour as revenge for the mutiny.

He dispatched an aide on Wednesday to tell TV cameras he was spoiling for a fight and would take on the whole party if need be. Johnson argued he had a mandate from 14 million British voters to carry on with his legislative agenda no matter the cost.

At this point scholars, pundits, and lawyers were debating whether there was any codified legal mechanism in Britain’s informal constitution, bound together principally by tradition, that could evict Johnson if he refused to leave Downing Street.

Potentially the Queen herself, as the head of state, would have to breach convention and intervene directly to remove him from government.

On Thursday, Johnson finally caved to pressure, paving the way for a Tory leadership contest to determine who can command majority support in the House of Commons.

Until a successor can be chosen, he will remain caretaker PM and head of a lame-duck government lacking authority to pass any important legislation.

In a TV address acknowledging he resisted his removal until the bitter end, Johnson blamed a “Westminster herd instinct” for forcing him out.

Next week the Tory party will announce the timetable for its leadership contest to determine which MP can form a parliament majority and with it win the right to take up residence in 10 Downing Street.

Currently the odds-on favorite is defense secretary Ben Wallace, but others including foreign secretary Liz Truss and former chancellor Rishi Sunak are also tipped as contenders.

A snap election is not expected with the party behind in the polls, but a new leader may seek a fresh mandate for governing.

The mastermind behind the Brexit referendum victory and the biggest Tory majority in Parliament since 1987, Dominic Cummings, warned his erstwhile boss could not be trusted.

One thing is for certain: Johnson’s polarizing premiership will be scrutinized by historians for years to come.