As the return-to-office debate rages in the U.S. and Europe, the matter is already settled in Asia 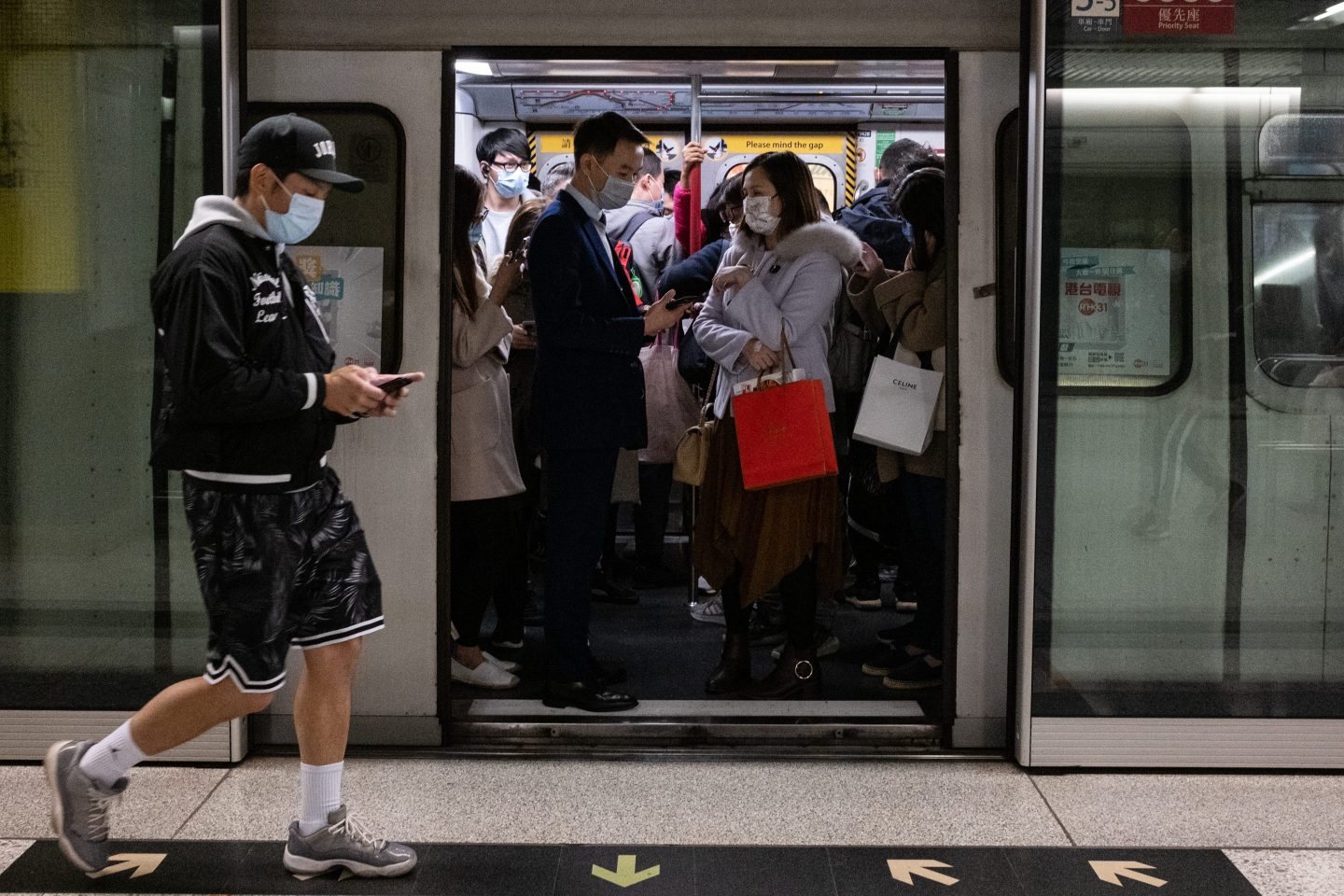 On the first day Goldman Sachs expected employees to work from its U.S. offices full-time, only half of staffers showed up. Apple has delayed a requirement for corporate employees to work from the office three days a week. JPMorgan CEO Jamie Dimon backed down from his demand that all employees work in the office all the time, conceding that working from home “will become more permanent in American business.” Many employers in the U.S. and Europe are desperate for employees to return to the office to boost productivity and collaboration, but many of the bribes and threats they’ve introduced so far have failed. Employees who’ve spent the better part of two years logging on from home are reluctant to forfeit the flexibility, comfort, and convenience of remote work.

But in other pockets of the world, employers won that tug of war without breaking a sweat. After spurts of working from home, white-collar employees in the finance hubs of Hong Kong, Singapore, and Tokyo mostly are back at their desks. Thirty-eight percent of companies in Asia-Pacific expect their workers to be in the office full-time, according to a survey of 150 companies conducted in March by commercial real estate manager CBRE. Another 24% of Asian offices expect their workers to be in the office “most” of the time. Meanwhile, CBRE’s survey of 185 U.S. office occupants found that 5% expect to be back in the office full-time and 32% expect a “mostly office” working culture.

“Compared to the U.S., it’s pretty much back to the office from Japan all the way down to Australia,” says Henry Chin, head of Asia-Pacific research for CBRE.

It’s not that workers in Asian financial centers prefer in-person work. In fact, 80% of Hong Kong workers want some level of flexibility, and 50% felt they were more productive with remote work options, according to a May survey from Cisco. But strict COVID responses, smaller living spaces, and office culture that prizes face time have made office work far stickier in the region than in the pandemic-era West.

‘I can’t wait to get back to the office’

Jason Humphries, cofounder of Suu Balm, a Singapore-based cosmetics company, told his 20 employees to work from home in April 2020 after the government ordered offices to close as a “circuit breaker” measure to control a COVID outbreak. Five months later, when the Singaporean government allowed offices to reopen, he thought bringing his employees back to the office would be a struggle. “I wasn’t in any great rush to come back into the office myself,” he said. “I have a lovely house, with the dog at my feet, and I can be with my family.”

But his employees, who live in smaller flats in the Southeast Asian city’s public housing estates, felt differently. “One of our managers said, ‘I can’t wait to get back to the office, at least a few days a week. I can get lunch with my colleagues rather than crowd-control at home,’” Humphries says.

Now, two years into the pandemic, workers in Singapore are mostly back in the office, with commuting 14% lower than pre-pandemic levels, according to Google mobility data. In Tokyo, commuting is 16% below the baseline. In Hong Kong, commuting levels have fully rebounded to what they were in January 2020, and the time city residents log at work has recovered faster than time spent at shopping malls, supermarkets, parks, or beaches. By contrast, commuting in London and Manhattan remain 35% and 45% below pre-pandemic levels, respectively.

One reason workers in Asian financial centers returned to the office more quickly is that they had less time to fall into a work-from-home routine. Hong Kong, Singapore, and Tokyo enforced strict COVID responses that kept virus cases, hospitalizations, and deaths from skyrocketing the way they did in the U.S. and Europe. During temporary spikes, city governments urged people to work from home, but they retracted the policies when cases subsided.

“Whenever civil servants would work from home, we would follow,” said one surveyor at a major Hong Kong property developer who asked to remain anonymous because she wasn’t authorized to speak about her workplace. “When the government was fully back in the office, we knew our company was going to follow.”

By contrast, governments in the U.S. and Europe didn’t distinguish working from home from larger lockdowns and stay-at-home orders, saddling employers with the decision of when to call workers back to the office.

“U.S. employers have gradually and increasingly warmed to remote work over the past 18 months… and many employers [and workers] became more effective in handling remote work as they accumulated experience doing so,” says Steven Davis, professor at the University of Chicago Booth School of Business and co-founder of Working From Home Research. Asia’s relative success in containing the pandemic meant there “was less impetus” to implement work-from-home policies in the first place, he says.

In the U.S., low unemployment (3.6% in May) is emboldening workers to push back against return-to-work orders. They know employers—hard-pressed for labor, with 1.9 vacancies per unemployed person—are reluctant to call their bluff.

Working from home is a nice prospect in a leafy U.S. suburb; it is far less pleasant in a dense Asian city where space is at an astronomical premium.

“One factor pushing down Asian levels of work-from-home, particularly in places like Hong Kong, is that apartment sizes are smaller,” says Nicholas Bloom, an economics professor at Stanford University and a co-founder of Working From Home Research.

In comparison, the average apartment size in the U.S. is 882 square feet.

Tight living quarters make for tight work-from-home quarters, especially when workers share the space with loved ones. Three-fourths of Hong Kong’s millennials still live with their parents, according to the Urban Research Group of City University of Hong Kong. Young Singaporeans often live with their parents too; the government doesn’t offer public housing to those under the age of 35 unless they marry.

“There were people begging to come back into the office,” said one manager at a global insurance company in Hong Kong who asked to remain anonymous. “Some snuck into the office, just to get some peace of mind, just so they could be out of the house.”

She felt that frustration personally: “I’ve been on calls with the CEO, and I was worried my mom might have barged in and asked, ‘Do you want some oranges?’”

Even when companies in Asian hubs have offered remote or hybrid work, an engrained workplace culture that values presenteeism and face time has kept employees from fully embracing it.

Last year, Japan’s prime minister urged citizens to work from home during a widespread COVID outbreak, but commuters still packed Tokyo’s public transport, eager to keep up appearances with their superiors and frustrated by their employers’ failure to deploy the technology needed for remote work.

Two-thirds of Hong Kong workers said that changes to company culture and mindsets were needed to make hybrid work function properly, according to the Cisco survey.

“There’s a level of FOMO, right?” says the Hong Kong insurance manager. “If everyone’s going in but you’re the only one that’s not going in, you probably start thinking, ‘Oh, should I be in?’” At some companies, “as part of the culture, you just don’t just get up and go, because everybody else is working hard. You have to be there,” she says.

Adherence to full-time in-person work could disadvantage cities like Hong Kong, Tokyo, and Singapore in the global battle for talent, now that so many white collar workers elsewhere are used to at least some flexibility.

“Leaders must acknowledge that a point of no return has been reached,” Wilson Ching, general manager of Cisco Hong Kong, said in a statement accompanying the firm’s research. Offering hybrid work “is the key to retain[ing] talent.”

But as the global economy slows, employers cut jobs, and workers lose leverage, Asian cities’ model of working may become more of the norm: work takes place in the office, with few exceptions.

The Wall Street Journal reports that U.S. employers are already reporting a greater confidence in asking employees to return to the office, surmising that a looser labor market has granted employers the upper hand.

“Employees will recognize as we go into a recession, or as things get a little tighter, that you have to do what it takes to keep your job and to earn a living,” Stephen M. Ross, the billionaire real estate developer, said in mid-June.

Workers in Asian cities who enjoyed stints of working from home remain hopeful that the pandemic’s workplace upheaval will have some lasting effects. The surveyor in Hong Kong is back to working in-office five days a week and is stressed by her lengthy commute. A hybrid system, she says, would be “ideal.”

Chin doubts employers in Asia will offer the “anywhere, anytime” model of working that some U.S. companies now allow. At most, he says, firms may permit employees to work from home every once in a while—so long as they ask permission in advance.