Tech companies have gone silent on data privacy since Roe v. Wade was overturned. When will they speak up? 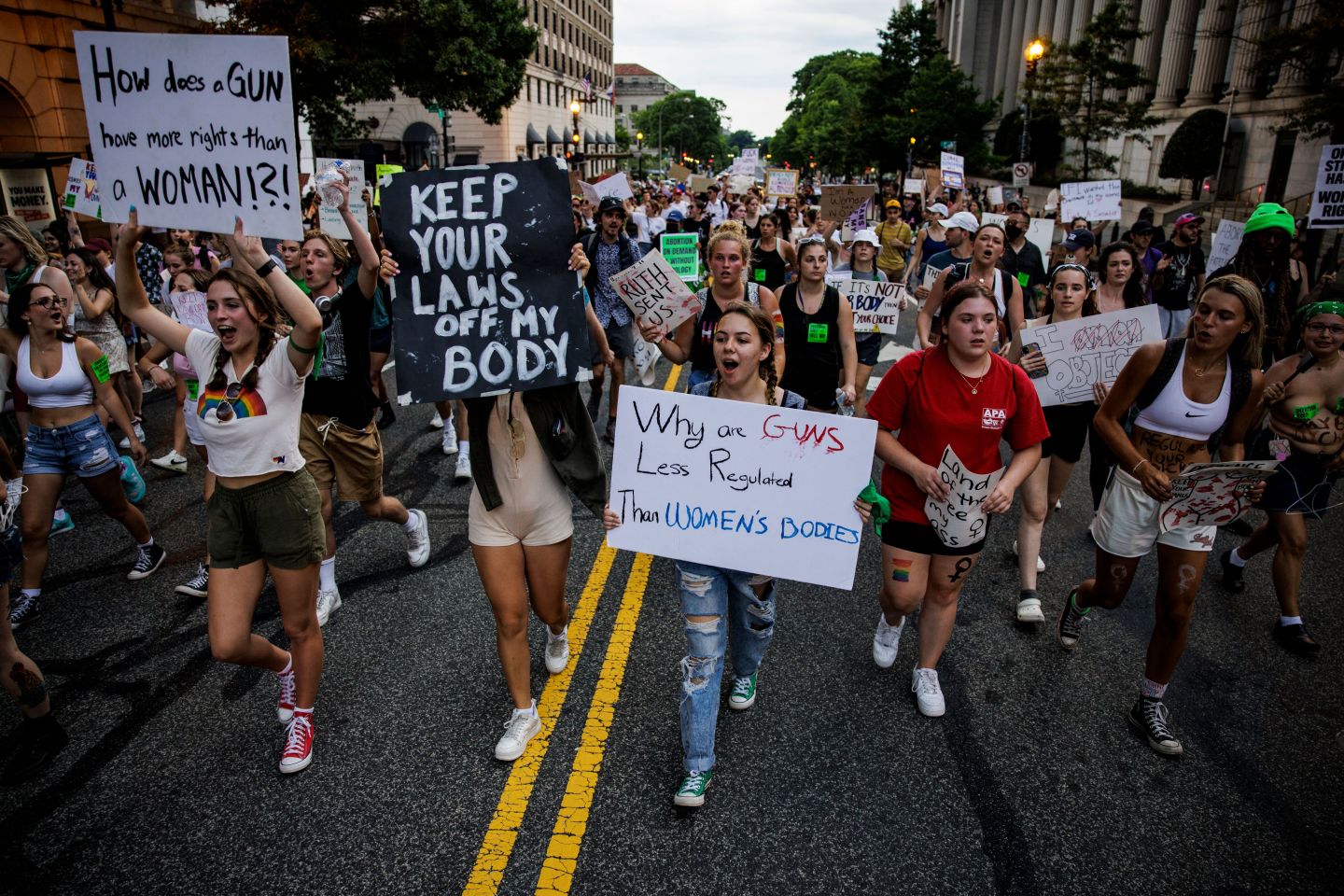 Abortion rights activists protest in Washington, DC, on June 26, 2022, two days after the US Supreme Court scrapped half-century constitutional protections for the procedure.
Photo by SAMUEL CORUM/AFP via Getty Images

Apple, Google, Meta, and other major tech companies had plenty to say to their employees about the landmark reversal of Roe v. Wade.

As for the general public? The nation’s tech giants have been conspicuously quiet.

Yet 72-plus hours since the decision came down, the tech companies most responsible for perpetuating our global surveillance state have uttered barely a peep about their policies and practices on this front—though they’ve been quick to assure their employees that they’ll cover workers’ abortion-related travel expenses.

“It is absolutely something to be concerned about—and something to learn about, hopefully before being in a crisis mode, where learning on the fly might be more difficult,” Cynthia Conti-Cook, a technology fellow at the Ford Foundation, told The Washington Post.

In some respects, it’s not totally surprising or suspicious that major tech companies have gone dark.

The ruling could trigger thorny matters of law, a discipline that prioritizes patience over pace. Corporations ultimately must follow state and federal statutes, sometimes leaving them little wiggle room in the face of legally obtained subpoenas and other law enforcement requests.

Cynics could also argue that tech companies have benefited financially from collecting and selling access to deeply private personal data—and Friday’s ruling does little to change that incentive structure.

But in a moment of deep confusion, with 13 states already enforcing abortion bans or set to enact restrictions in the coming days, clarity matters.

In those states with immediate bans, some complex questions about the technicalities of abortion laws remain unanswered. Can women legally obtain abortion pills from sources outside of their home state? What happens if state legislatures pass laws that stop their residents from traveling to other states for abortions? What legal rights do women have while new abortion-related laws are challenged in court?

As these uncertainties loom, digital consumers will inevitably have questions for tech firms storing data about their online activities. Will companies provide information about abortion pill searches and online purchases to law enforcement? What kind of digital tools are encrypted and impossible to subpoena? How can users opt out of certain corporate tracking tools?

By now, tech companies have had plenty of time to ponder these questions and publish as much information as possible—especially given that a draft majority opinion in the case leaked in early May.

Corporate leaders undoubtedly find themselves caught in a difficult spot on abortion-related topics. As Fortune’s chief executive, Alan Murray, wrote Monday morning: “Most CEOs I’ve spoken with want to ensure their employees have adequate options to deal with their own family’s health care challenges, but they aren’t interested in finding themselves at the center of a heated and divisive partisan political debate.”

For tech companies caught in the crossfire, there’s a potentially palatable middle ground: clearly stating corporate policies and practices for consumers, allowing them to act with a kind of digital informed consent. In these politically fraught times, it’s the least that the tech industry can do.

Landing in the Lone Star State. Taiwan-based semiconductor company GlobalWafers announced plans Monday to build a $5 billion manufacturing plant near Dallas, Texas, The Wall Street Journal reported. GlobalWafers would become the latest semiconductor giant to devote billions of dollars to chip production in the U.S., where lawmakers are debating whether to provide $52 billion in subsidies to the industry as an economic and national security boost. Intel, Samsung, and Taiwan Semiconductor Manufacturing Company each unveiled plans for multibillion-dollar, U.S.-based plant projects in the past 18 months.

Nothing left in the quiver? The distressed cryptocurrency-centered hedge fund Three Arrows Capital defaulted Monday on $670 million in loans intended to stabilize the firm. The highly leveraged fund owed the amount to digital asset brokerage Voyager Digital under terms of a lifeline thrown to the outfit last week. Three Arrows Capital faltered after the recent decline in cryptocurrency prices, the collapse of the TerraUSD and Luna tokens, and liquidation by two of its highest-profile investors.

Another down day. Coinbase shares sank 9% in mid-day trading Monday after Goldman Sachs downgraded the digital asset exchange’s stock to a sell rating, Bloomberg reported. Goldman Sachs analysts said Coinbase, which already announced layoffs this month totaling 18% of its workforce, will need to make “substantial reductions” in costs after a precipitous falloff in crypto prices and a drop in crypto activity on the company’s platform. Coinbase shares are down 77% year-to-date.

An unexpected renaissance. China’s foundering tech stocks experienced a spring awakening this year. As Fortune’s Clay Chandler reported Monday, Chinese tech companies have rallied from uninvestable to irresistible in the matter of three months, as COVID lockdown fears subsided and President Xi Jinping’s administration eased its crackdown on the industry. The Hang Seng Tech Index, which tracks 30 of China’s largest tech companies traded in Hong Kong, is up 20% since March 15. During that same stretch, the Nasdaq Golden Dragon China Index has jumped 52%, trending in the opposite direction of U.S.-based tech companies.

But Goldman Sachs China strategist Kinger Lau now says the worst may be over for China shares. In a June 13 report, he argued that the recent recovery is “on par” with earlier China market corrections and may yet have room to run.

Companies are tracking employee data to design the office of the future, by Aman Kidwai

A faked version of Kyiv leader Klitschko fooled mayors across Europe—but it’s not clear this was really a ‘deepfake’, by David Meyer

A cold war. The latest tool in the battle between Russia and Ukraine’s many allies: a smart thermostat. Reuters reported Monday that the European Union aims to outfit at least 1.5 million homes this year with energy-saving, web-connected thermostats, with the goal of reducing reliance on Russian fuel this winter. The Europeans are expected to get help from their American counterparts, as President Joe Biden’s administration pledged to assist with manufacturing the necessary hardware. The devices won’t put a huge dent in the EU’s dependence on Russian oil and natural gas—the thermostat target accounts for less than 1% of all households in the bloc—but policymakers pitched the plan as part of a larger strategy for undercutting the federation.