From ‘uninvestable’ to irresistible: How China’s internet stocks staged an unlikely comeback and outperformed the U.S.’s bear market 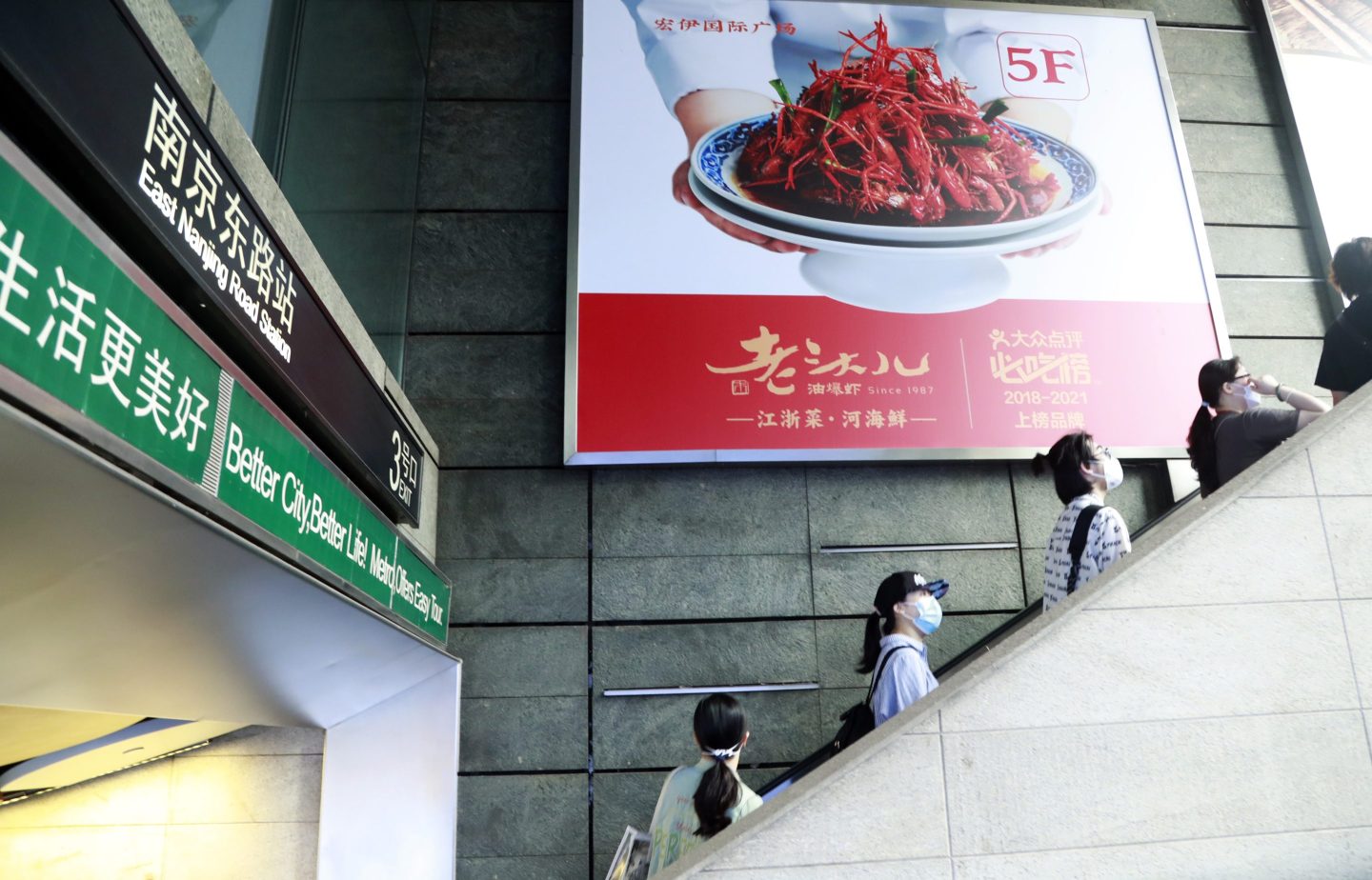 Passengers ride an escalator at a subway station on June 1, 2022, in Shanghai as the city gradually restored production and daily life after weeks of COVID lockdowns.
Tang Yanjun—China News Service via Getty Images

In May, Yao made headlines again, this time as a China bull. He revised his rating of seven leading Chinese internet firms to “overweight,” up from an earlier “underweight” rating, and bumped up several more to “neutral.” Yao isn’t alone in his reassessment of China shares. In recent weeks analysts at a score of leading investment houses—Goldman Sachs, Bank of America, Jefferies Financial Group, Amundi, and Citi—have brightened formerly dim outlooks for equities in the world’s second-largest economy. The shift in sentiment has helped to drive the MSCI China Index, the broadest measure of China stocks on mainland and offshore markets, up more than 20% since March 15.

Other key China stock indexes have gained as well. The CSI 300, the leading benchmark of companies listed on exchanges in Shanghai and Shenzhen, has risen nearly 12% during that same interval. The Hang Seng China Enterprises Index, which tracks Chinese shares traded in Hong Kong, is up 23%, while the Golden Dragon Index, dominated by high-flying Chinese companies listed on the Nasdaq, has soared nearly 52%. Some analysts now tout China as a “safe haven” from recent carnage in U.S. and Europe markets.

No one is predicting a return—at least not anytime soon—to the dizzying valuations commanded by Chinese tech companies before November 2020, when Chinese President Xi Jinping squelched a $37 billion initial public offering planned by Ant Group, the sprawling mobile payments company controlled by billionaire Jack Ma. But Goldman Sachs China strategist Kinger Lau now says the worst may be over for China shares. In a June 13 report, he argued that the recent recovery is “on par” with earlier China market corrections and may yet have room to run. Lau’s upbeat take is notable because he and colleague Timothy Moe were among the first analysts to use the “u-word” in connection with China. In a July 2021 research note they observed that “’uninvestable’ has featured in many of our recent conversations with clients regarding investing in Chinese stocks.”

Sean Darby, global equity strategist at Jefferies, also believes China shares have turned the corner. “A bottom has been made in the CSI 300,” he wrote in June 13 note to clients. “We upgrade to Bullish from Modestly Bullish.”

Such comments are a far cry from the gloom that prevailed among investors on March 14, when Yao downgraded 28 Chinese internet stocks including Alibaba Group Holding, Tencent Holdings, and Meituan to “underweight,” deeming them “uninvestable” for the next six to 12 months owing to rising geopolitical and macroeconomic risks. The write-downs were unusually aggressive. For example, Yao slashed his price target for Alibaba to $65, down from $180, making it the lowest among analysts surveyed by Bloomberg.

Yao’s dire warning about Chinese internet stocks prompted a global stampede out of China stocks in nearly every sector. In hours, Hong Kong’s Hang Seng Index plunged 6% to its lowest level in 10 years. At the time, Chinese authorities were battling COVID-19 outbreaks in multiple cities, the tech hub of Shenzhen already was in COVID lockdown, and foreign policy experts warned that the U.S. might hit China with harsh economic sanctions if Beijing backed Russia’s invasion of Ukraine. China’s once-dynamic internet giants remained shrouded in a cloud of uncertainty in the wake of a nearly two-year regulatory crackdown.

And in April, things got worse. The virus flared in Shanghai and Beijing, prompting authorities to impose harsh citywide lockdowns that dampened Chinese consumption, snarled global supply chains, and dragged on for two months. On May 6, when exchanges in Shanghai and Shenzhen reopened after the nation’s “Golden Week” holiday, the CSI 300 index tumbled to its lowest level in two years.

But Yao and his team saw reasons for optimism. On May 16, they upgraded a passel of leading Chinese tech companies including Alibaba, Tencent, Meituan, and Pinduoduo citing strong policy support from Beijing.

In a report announcing the abrupt reversal, the JPMorgan team referenced a March 16 meeting in Beijing of China’s top financial policy committee led by Liu He, the government’s economic policy czar. In that meeting, according to accounts in China’s state-controlled press, Liu vowed the government would implement new measures to boost the economy and should “actively introduce policies that benefit markets.” The committee also resolved that measures to “rectify” China’s internet companies should be completed “as soon as possible.”

Liu’s comments had drawn mixed reviews from global investors at the time. Some hailed them as a signal that China’s leaders, who had long seemed oblivious to the worldwide selloff in China stocks, now recognized they needed to do something to reverse it. But others dismissed the remarks as empty rhetoric—or the product of a factional rift between market-oriented technocrats like Liu and premier Li Keqiang versus a more “ideological” camp of leaders loyal to Xi.

Yao and his team deemed Liu’s March 16 pronouncements a key turning point for Chinese tech shares. “Significant uncertainties facing the sector should begin to abate on the back of recent regulatory announcements,” they concluded.

It was another controversial call—and one some cynics said was driven more by politics than economic fundamentals. JPMorgan was in the doghouse with China’s leaders even before Yao’s “uninvestable” report. In November, CEO Jamie Dimon, who has identified breaking into China’s onshore banking business as a critical priority for the firm, joked at a bankers’ dinner in Boston that, although JPMorgan and the Chinese Communist Party were both celebrating their 100th anniversary, he’d bet on the bank to outlive the party. Dimon later apologized.

In early May, Bloomberg, citing anonymous JPMorgan sources, reported that an internal investigation had concluded that Yao’s use of the “u-word” was the result of an editorial screwup and should never have happened. JPMorgan declined to comment on the Bloomberg report, but in an e-mail sent to the news service the firm stressed that “we stand by our published research and the analyst’s independent analysis of the sector.”

As May gave way to June, Yao’s volte-face looked increasingly shrewd. Shanghai and Beijing, by dint of unprecedented testing and surveillance measures, managed to contain their COVID outbreaks and were exiting lockdown. A parade of Chinese internet giants, including Alibaba, Tencent, Meituan, and Baidu, announced better-than-expected quarterly financial results and raised their estimates for earnings for the rest of the year. On June 8, Beijing gave tech stocks a positive jolt by announcing the approval of 60 new online game licenses. Investors cheered the move as a big improvement from last August when regulators imposed strict limits on the number of hours students could spend playing online games and the state media had decried all online games as “spiritual opium.”

In recent weeks, there have been widespread media reports that regulators are on the verge of concluding their probe into data security violations at ride-hailing giant Didi Chuxing, a move that would allow the company to resume normal business operations in China—and potentially move forward with plans to float shares in Hong Kong. (Didi shareholders voted last month to withdraw from the New York Stock Exchange as part of the company’s bid to regain Beijing’s favor.) Other reports have suggested that regulators even are considering allowing Ant Group to reschedule its initial public offering. Xi’s decision to scuttle that debut following a defiant speech by Ma is widely perceived as the opening salvo in Beijing’s regulatory blitzkrieg against the nation’s largest internet companies.

Meanwhile, declines in U.S. and Europe markets in response to higher oil prices and aggressive interest rate hikes announced by the Federal Reserve and European central banks to combat inflation have helped China shares regain at least part of their lost luster. The Dow Jones industrial average has fallen 12% over the past three months, while the S&P 500 has slumped 16%. “To be underweight Chinese equities today is risky,” Vincent Mortier, Amundi’s chief investment officer declared in a May interview with Bloomberg.

In China, too, risks abound. China’s zero-tolerance approach to containing COVID means the nation’s largest cities, even those that have recently emerged from protracted lockdowns, could be shut down again in the event of a new outbreak. Beijing has yet to engineer a solution to its residential property crisis—apartment and housing sales have fallen on a year-on-year basis for 11 months straight—which many analysts see as a bigger negative for private consumption than the threat of lockdowns. The financial fate of nearly 300 Chinese companies that now trade on Wall Street but could be forced off U.S. exchanges unless regulators in the U.S. and China reach a deal on disclosure rules remains unclear. And while the regulatory assault on China’s giant internet companies may be easing, analysts and industry executives warn they see little prospect Beijing will allow that sector to return to the runaway growth that characterized the two decades before November 2020 when Xi canceled Ant’s mammoth IPO.

For now, though, it seems clear that at least some global investors are tiptoeing back to Chinese equities. Morgan Stanley chief China equity strategist Laura Wang, who has been among the biggest skeptics of the idea of a China rally, says she’s not recommending clients load up on China shares yet. But in an interview with Bloomberg TV earlier this month, she conceded that China stocks are looking more attractive and may be on the “last leg” of an extended bear market.