These states have banned abortion. Here’s what abortion laws will likely be in every state 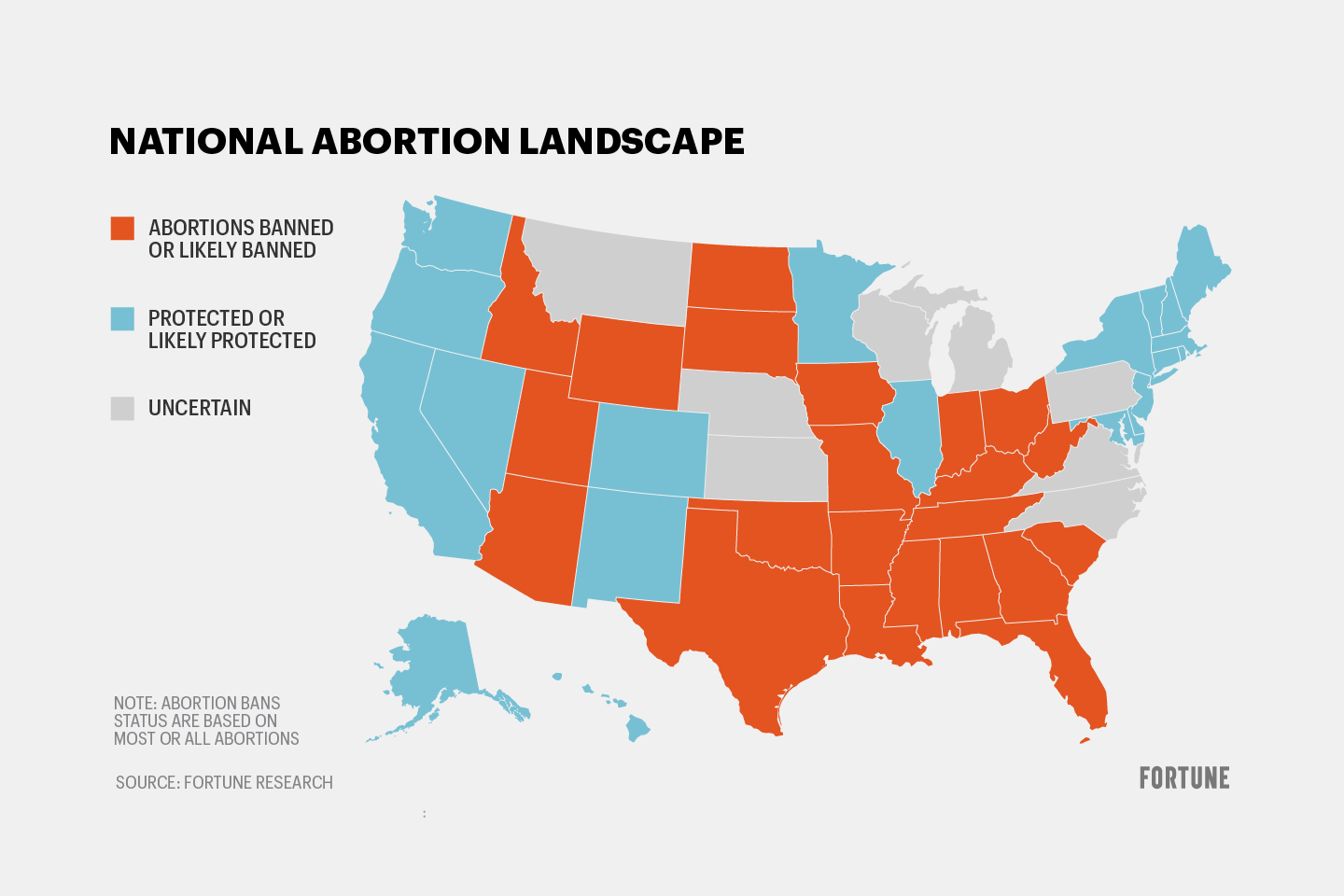 When the Supreme Court released its decision on Dobbs v. Jackson Women’s Health on June 24, it simultaneously overturned the landmark Roe v. Wade case that protected the nationwide right to abortion.

That leaves the question of abortion rights up to state governments to decide.

Multiple states already have “trigger laws” in place that automatically banned abortion access in anticipation of an eventual Supreme Court ruling on Roe. And reproductive health care is expected to become even more limited as other states put forth their own abortion bans.

Alabama does not have a trigger law, but its officials are now enforcing a 2019 law that makes performing an abortion a felony. Governor Kay Ivey said on June 24 that the state would “immediately ask the court to strike down any legal barriers to enforcing this law.” A judge lifted an injunction that prevented that law from going into effect.

Arkansas
Arkansas Attorney General Leslie Rutledge certified a trigger law the afternoon of June 24, banning all abortions except to save the life of the mother and making no exception for rape or incest. Now, anyone who performs an abortion risks a felony charge with a $100,000 fine or at least 10 years in prison, but the law will not charge someone for seeking the procedure.

A state judge on July 8 lifted an earlier court decision that had temporarily blocked Louisiana’s trigger laws after a lawsuit argued they lacked a “clear and unambiguous effective date” and “constitutionally required safeguards to prevent arbitrary enforcement.” Once again, abortions are outlawed in the state, and clinics have already closed.

Missouri’s Attorney General Eric Schmitt signed an opinion on June 24 to allow its trigger law from 2019 to go into effect.

In 2019, Ohio passed its own “heartbeat” law, which Gov. Mike DeWine signed into law. Federal courts stopped the law from going into effect. With Roe’s overturn, DeWine and the state’s Attorney General Dave Yost are sought to lift the stay. A six-week abortion ban is now law.

Even before a decision was made on Roe v. Wade, Oklahoma has banned nearly all abortions since the state lawmakers approved a bill in late May. On top of that, the state has a trigger law that the attorney general certified late on June 24.

South Dakota passed its trigger law in 2005, and it went into effect immediately after Roe was overturned, according to the Guttmacher Institute, a research organization seeking to advance reproductive health rights. Then on July 1, Governor Kristi Noem signed an executive order going one step further that banned telemedicine appointments with providers who prescribe abortion pills.

The Texas Supreme Court on July 2 blocked a lower court order that had allowed clinics to continue performing abortions. That order, made by a Texas judge on June 28, served as a temporary restraining order, blocking the state from enforcing a pre-Roe abortion ban. It had allowed some clinics to resume performing abortions up to six weeks into a pregnancy, although many people do not even know they are pregnant by that time. Ken Paxton, the state’s attorney general, had said he would be “immediately appealing” the judge’s decision. Separately, Texas passed a trigger law last year, set to go into effect 30 days after the Supreme Court ruling.

Tennessee’s Attorney General Herbert Slatery filed an emergency motion on June 24 asking the 6th Circuit Court of Appeals to lift an injunction on a 6-week abortion ban from 2020. The next week, a federal court allowed the ban to go into effect. Tennessee has another trigger law that takes effect 30 days after Roe is overturned and bans nearly all abortions regardless of gestational age.

On June 27, a federal judge granted Planned Parenthood’s request for a temporary restraining order that placed a hold on Utah’s trigger law, which went into effect immediately after Roe. While the trigger law is in limbo for the next two weeks, a 2019 law took effect and banned abortions in the state after 18 weeks.

Where abortion could be banned within days

A Florida judge ruled on June 30 that a ban supposed to go into effect the next day violates privacy protections in the state constitution. The law signed this spring would have prohibited abortions after 15 weeks in the state. Residents can still have an abortion up to 24 weeks into a pregnancy, in accordance with existing restrictions.

“The Supreme Court’s decision is clear, and it is now up to the states to address this important issue,” wrote Indiana Gov. Holcomb on June 24. “We’ll do that in short order in Indiana.” Originally planned for July 6, the special session now convenes on July 25.

North Dakota’s Attorney General Drew Wrigley was evaluating the Supreme Court’s decision as of the afternoon of June 24. Now that he has certified it, the state’s abortion ban will go into effect on July 28.

Where there will likely be abortion bans later this year

Idaho’s abortion ban from 2020 is one of several that will go into effect 30 days after the Supreme Court ruling. The trigger law only allows abortions in cases of rape, incest, and if the mother’s life is at risk.

A Kentucky judge granted the ACLU’s request on June 30 to temporarily block a state trigger law banning abortions. Kentucky passed its trigger law in 2019 to ensure that abortion would be deemed illegal in the state “effective immediately” upon a Supreme Court overturn. According to the ACLU’s Kentucky office, the state’s only abortion clinic has stopped offering services “as a precaution," and abortion is effectively banned.

Attorney General Mark Brnovich declared on June 29 that an 1864 Arizona law that predates when it achieved statehood and mandates prison time for anyone who performs an abortion is “back in effect.” According to the AG, the law supersedes one signed in March by Gov. Doug Ducey that limits abortions to before 15 weeks except if necessary to save the mother’s life. Clinics in the state already halted all abortions after the Supreme Court ruling on June 24, fearing enforcement of the pre-statehood law, and abortion is effectively banned.

In 2019, Georgia passed a law banning abortions six weeks after conception. A district court ruled in favor of an injunction brought on by the ACLU, Planned Parenthood, and the Center for Reproductive Rights, stopping the law from going into effect in 2020. The state appealed that decision to a federal court, which stayed the case pending the Supreme Court’s ruling on Dobbs. With that decision now handed down, it’s likely the state’s original law will now take effect.

This month, the Iowa Supreme Court ruled that the state’s constitution does not protect abortion as a fundamental right, overturning a previous decision from 2018. In 2019,  Republican lawmakers in the state passed legislation banning abortions after a fetal heart can be detected, something that can happen as early as six weeks into a pregnancy. Though a court blocked that law from taking effect, it’s possible that new legislation will now pass more easily.

In 2018, West Virginia voters approved an amendment to the state’s constitution to affirm that it does not protect abortion as a fundamental right. The state also has a pre-Roe ban that could now be enforced again. “I applaud the Supreme Court’s courageous decision today,” wrote Gov. Jim Justice on Twitter on June 24. “I will not hesitate to call a special session after consulting with the Legislature and my legal team if clarification in our laws needs to be made,” he added.

The likelihood of abortion access or restrictions is unclear

A few states have no laws in place that explicitly preserve abortion access, leaving them vulnerable to changes in party seats during the imminent midterm election season. Others have protections that risk getting overruled. These states include:

The Kansas constitution recognizes and protects the right to an abortion, the state’s Supreme Court ruled in 2019. But voters could remove that protection through a constitutional amendment when a statewide referendum is held in August.

Michigan currently has a 1931 law in place that bans abortion except in cases where the mother’s life is put in danger. A court recently placed an injunction on the law to ensure that it would not be enforced with the overturning of Roe. Though the state’s Democratic governor and attorney general have both said they would not enforce the ban, that could change following elections this fall.

Since 1999, Abortion has remained legal in Montana due to protections under its state constitution. Its Republican Attorney General Austin Knudsen has asked the state’s Supreme Court to overturn that decision. The state is also grappling with a series of abortion restrictions passed last year. They were blocked and will stay in limbo until abortion rights are no longer constitutionally protected in the state.

Nebraska’s Republican Gov. Pete Ricketts said in May he planned to call a special session if Roe v. Wade is overturned. He reacted to the news on June 24 in a statement, “I will be working with our legislative leaders to determine what more we can do to protect our preborn babies.” Yet a filibuster blocked the legislature’s attempt to push through a trigger law in April.

The state’s Democratic Gov. Roy Cooper has vetoed several restrictive abortion laws and vowed in May he would continue to do so with any abortion ban bill. But Cooper is up for reelection in 2024, and Republicans control both chambers of the state legislature.

Gov. Tom Wolf has vetoed multiple anti-abortion bills over the past few years from Pennsylvania’s Republican-controlled legislature and pledged to keep abortion rights legal in the state. The term-limited governor leaves his office in January.

In 2022, Virginia failed to pass seven anti-abortion bills. The state’s pro-life Gov. Glenn Youngkin said on June 24 he has asked legislators to “be prepared to introduce legislation when the General Assembly returns in January.”

Wisconsin currently has a law in place from 1849 that bans abortions except in cases where it saves the mother’s life. After the Supreme Court's Roe decision was leaked last month, the state’s Attorney General Josh Kaul said he would not enforce it. A recent attempt by Democratic Gov. Tony Evers to repeal the law failed when Republican lawmakers convened and adjourned a special session that Evers called about the law without taking action.

Where abortion will likely be protected

These states do not explicitly protect the right to an abortion by state law but are expected to maintain abortion access.

New Hampshire
Last year, New Hampshire Governor Chris Sununu signed a ban on abortions after 24 weeks but later added an exception. On June 24, the governor confirmed in a statement that “Regardless of this Supreme Court decision, access to these services will continue to remain safe, accessible, and legal in New Hampshire.”

Where abortion will be protected by state law

Twenty-one states and Washington D.C. currently have protections in place to keep the right to an abortion legal regardless of the Supreme Court decision, according to the Center for Reproductive Rights. Of those states, three—Montana, Florida, and Kansas—have faced challenges in court over that access. The remainder, often called “haven states,” are considered places where abortion is likely to stay protected and include:

Please check back for updates