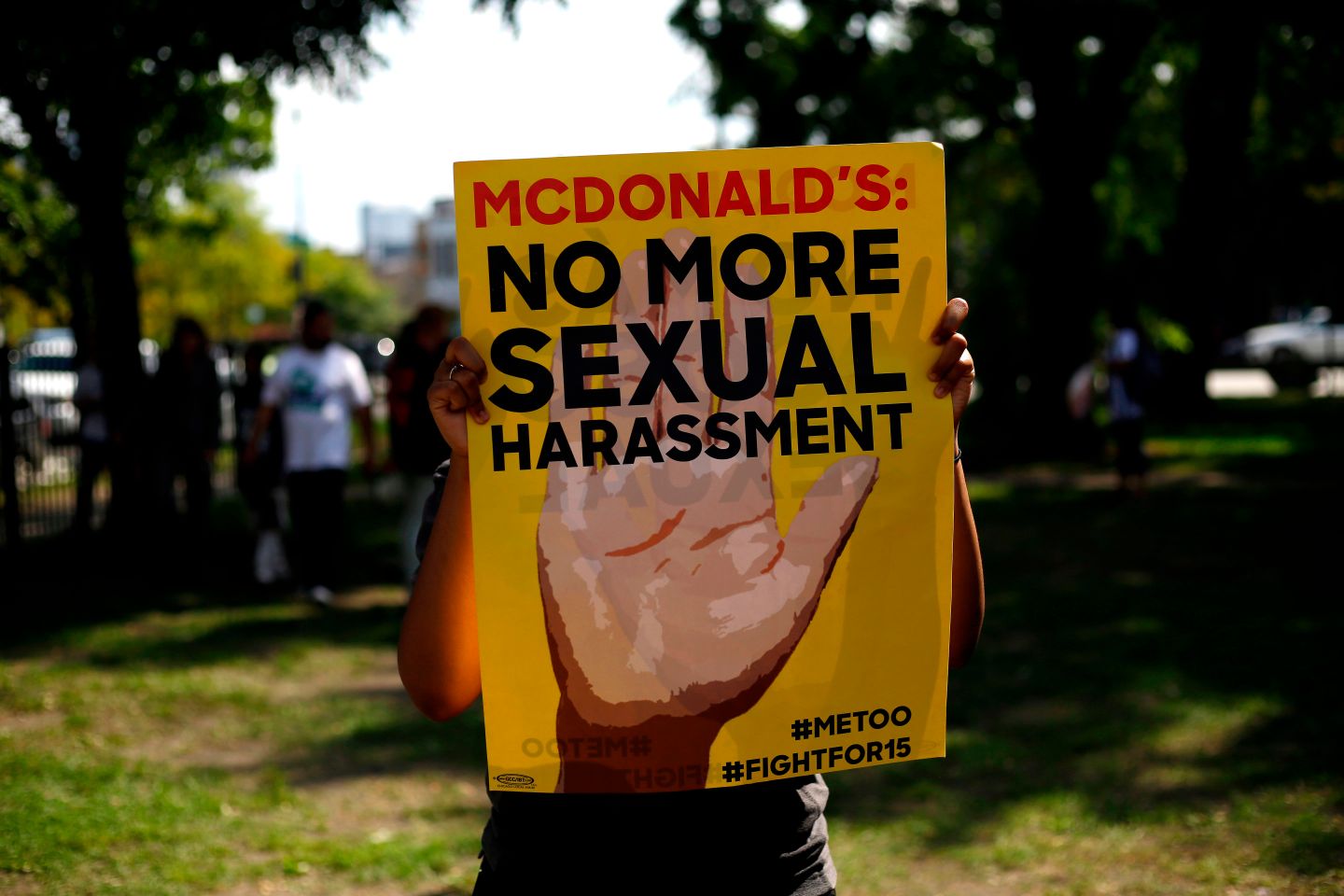 A McDonald’s employee holds a sign during a protest in Chicago in 2018. “As the biggest name in fast food, McDonald’s should aspire to be the gold standard, not just in its product and profitability, but in its workplace environment,” write the authors.
JOSHUA LOTT—AFP/Getty Images

Nearly four years after #MeToo exploded, McDonald’s shareholders have finally had enough of the rampant sexual harassment at the company’s restaurants. A lawsuit filed last month raises sweeping allegations that the McDonald’s board and top executives have ignored “widespread sexual harassment in McDonald’s restaurants,” allowing a “severe reputational issue for the company’s brand.” (In a separate action last week, investors sued to gain access to documents concerning the company’s investigation of sexual misconduct by former CEO Steve Easterbrook and human resources chief David Fairhurst.) Similar shareholder actions have been filed against some of the worst corporate offenders to come to light during the #MeToo era—from Fox News to Google to CBS—some yielding multimillion dollar settlements and systemic reforms.

Changes at McDonald’s will come too late for Emily Anibal, who in 2016 began working at her hometown McDonald’s outside Lansing as a high school junior. It was her first real job. Like millions of teenagers before her, Anibal wanted to earn money of her own and to get experience in the “real world.” And she picked McDonald’s not only because it’s the biggest name in fast food—it was a name she had grown up with as a customer.

But while McDonald’s sells itself as “America’s best first job,” Anibal’s experience was anything but. A manager at her restaurant who openly fantasized about sex with teenagers—such as by warning that he had “a minor problem turning into a major one”—also routinely called women “bitch,” “whore,” and “cunt” and pinched their breasts, slapped or kicked their buttocks, and “twerked” his groin against them. Anibal was no exception; on at least one occasion, the manager grabbed her by the shirt and slammed her up against a counter.

In a federal court in Michigan, Anibal is trying to hold McDonald’s accountable. With representation by the ACLU and private cocounsel, Anibal and three other women have filed a lawsuit seeking to represent nearly 100 women who had to work in the hostile environment created by that one manager.

Recent years have seen dozens of highly publicized complaints alleging similar abuse at McDonald’s around the country—many involving harassment of teenagers like Anibal—and thousands have protested what they say is a culture of unchecked sexual misconduct.

McDonald’s recently asked the court to dismiss the Michigan case—but not because it denies that the misconduct occurred. Instead, McDonald’s says that even if the manager did everything he is alleged to have done, the company isn’t legally responsible for it. The reason? Anibal and her coworkers were not McDonald’s “employees”; instead, they were employees only of MLMLM Corporation, an “independently owned” McDonald’s franchise.

According to McDonald’s, because laws against harassment apply only to “employers,” it gets a free pass for the misconduct experienced by Anibal and her coworkers, not to mention the rest of the roughly 1.5 million people who constitute the McDonald’s franchisee workforce. Because franchises represent 95% of the more than 14,000 McDonald’s nationwide, that’s the vast majority of people working under the Golden Arches.

Indeed, despite dictating virtually every aspect of franchisees’ operations—the whole point of the franchise model is that a Big Mac purchased in Miami tastes precisely the same as one bought in Anchorage—McDonald’s has for years disclaimed so-called joint employer liability for all manner of employment and labor law violations alleged by the workers who make those Big Macs, even as their labor generates billions in profits for the corporate entity. (A rule change during the Trump administration gave the company a particular boost in cases alleging unfair labor practices.)

But the hypocrisy of McDonald’s “not it” legal defense finally is becoming too glaring to ignore. Indeed, the shareholder lawsuit specifically criticizes company leaders for “abdicat[ing] any oversight of franchisees for sexual harassment” despite their otherwise ironfisted control of franchise operations. A federal court in Missouri recently rejected the company’s effort to dismiss a harassment lawsuit filed by a franchise worker.

Even the company itself is no longer pretending that it can’t control how workers are treated at franchise locations. In April 2021, McDonald’s announced the rollout of new global standards against harassment (among other harms), which it says it will mandate in franchise stores as well as corporate locations beginning in January 2022. In announcing the initiative, CEO Chris Kempczinski described franchise workers as part of the McDonald’s “System”: “Sexual harassment in the workplace is an affront to everything we stand for as a System. It has no place in any McDonald’s restaurant, and it will not be tolerated.”

As the company goes about turning these vague aspirations into reforms that actually improve people’s lives, it should go to the source: the workers themselves. Worker-driven anti-harassment models, like the innovative Fair Food Program created by agricultural workers in Florida, have high success rates because they rely on workers to craft the anti-harassment rules all must live by, and enlist everyone, including bystanders, in the goal of abiding by a rigorous code of conduct that puts harassment on par with other dignitary concerns like rest breaks, wage and hour compliance, and occupational safety.

As the biggest name in fast food, McDonald’s should aspire to be the gold standard, not just in its product and profitability, but in its workplace environment. If it makes good on its recent promise to truly protect all who wear the McDonald’s uniform, its positive effect on the franchisor model—not only in fast food, but in franchised businesses ranging from hotels to fitness centers to supermarkets—could be transformative. Emily Anibal may have moved on with her life, but for the millions of other women and teens still serving up McDonald’s iconic burgers, fries, and shakes, change can’t come soon enough.

Gillian Thomas is a senior staff attorney at the ACLU Women’s Rights Project, of which Ria Tabacco Mar is the director. With cocounsel, they represent Emily Anibal and a class of other women seeking to hold McDonald’s responsible for harassment in franchise restaurants.