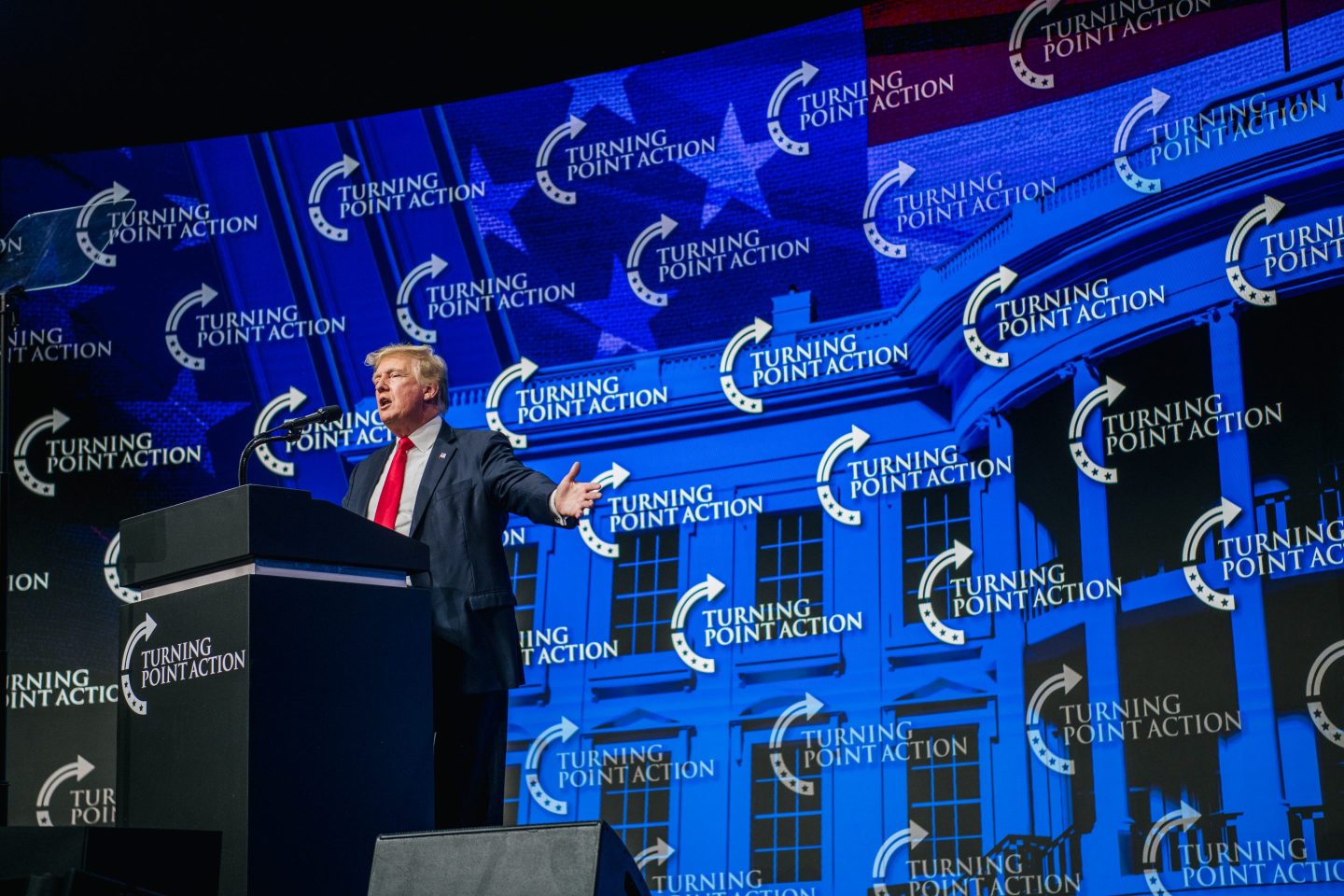 Former President Donald Trump speaks at a rally in Phoenix on July 24, 2021. “Trump’s waning media presence and influence, as well as the Democratic Party’s current fundraising strategy, have seemingly been a boon to Democrats vying to maintain control of the House,” the authors write.
Photo by Brandon Bell/Getty Images

Many political commentators have once again fallen for misleading Trump narratives intended to divert public attention from the truth. In this instance, the narrative goes something like this: The enduring popularity of Donald Trump is turning into a huge fundraising boom that will carry Republican candidates to overwhelming victories in 2022.

Our original analysis of Federal Election Commission data shows that this story line represents yet another “big lie,” this time distracting the public from the facts of Trump’s and his party’s faltering funding.

A simple Google search of the phrase “Trump $102 million funds” identifies fully 2,050 references in news publications in the past month alone—including alarmist, high-profile pieces in multiple major outlets, many published under banner headlines pronouncing Trump’s soaring fundraising success and pointing to the “new” nine-figure bounty in his campaign coffers. But the real and largely untold story is that Democrats have flipped places with Republicans and are now far out-raising GOP congressional candidates.

The much trumpeted $102 million figure hasn’t held up to scrutiny. While reporting noted that the former President’s political committees brought in $82 million during the first half of the year, CNN would later clarify that “that total also included funds collected in 2020 that were transferred into his account this year,” raising the question of just how much of this money comprised truly new 2021 inflows.

Adding on to this, a new report published by the New York Times has discovered that nearly 20% of the $56 million raised in 2021 has had to be refunded due to highly questionable fundraising tactics. These tactics involve opt-in boxes that are automatically checked when a donor contributes money to Trump’s political fund through the GOP-sponsored WinRed website. That unethical practice was not unique to the former President: All in all, the Republican Party has returned more than $135 million from the 2020 election cycle through June 2021.

Whatever its provenance, little of the $102 million in his war chest has been spent on Donald Trump’s endorsed candidates to date. Trump, who boasts of the ultimate power of his endorsement, has seen that influence tested in the past few weeks. In late July, his endorsed candidate, Susan Wright, lost to fellow Republican Jake Ellzey by more than six percentage points in a special election in Texas’s Sixth Congressional District. A week later, Trump’s favored candidate, Mike Carey, did emerge victorious in an 11-way Republican primary to replace Rep. Steve Stivers in Ohio’s 15th District—though not without an 11th-hour infusion of $350,000 from a Trump-friendly super PAC, a sign that the Trump brand alone may not be what it seems.

Meanwhile, overall Republican fundraising in 2021 has not only been lagging previous year benchmarks but also currently trails the totals of their Democrat counterparts in Congress. According to the FEC, incumbent congressional Republicans have been hit hard in the first six months of fundraising this year. Individual Republican candidates have raised only $149.1 million—an amount equivalent to only 65% of the $231.7 million raised by individual Democratic candidates.

Democrats are threatening the run of recent GOP dominance in fundraising capabilities. During the preceding two years, Republicans were out-raising Democrats by a multiple of 1.667x, according to our analysis. But a recent examination of the national Republican and Democratic Party committees in the first six months of fundraising in off-year cycles shows Democrats ($204.4 million) gaining ground, raising only about $1 million less than Republican Party organizations ($205.5 million). Over the same period in 2019, Republicans out-raised Democrats by over $45 million.

This phenomenon can be partly explained by corporate PACs either pausing or altogether discontinuing contributions to the 147 Republican legislators who voted against certifying President Biden’s election victory. But corporate donations tell only a small part of the full story, given that individual contributions accounted for 80.8% of all donations through the first six months of the year.

In that individual market, Democrats have gained an edge. Long hailed for its ability to seamlessly attract small-dollar contributions, the financial platform ActBlue catapulted the Democratic Party to the forefront of digital fundraising over the past decade. Republicans have attempted to counter. Their competitive platform, WinRed, was established in 2019 and is beginning to make progress, largely driven by adept use of social media by Trump. Republican Party organizations, including the Republican National Committee, National Republican Senatorial Committee, and National Republican Congressional Committee, are accruing small-dollar donations at a rate of $131 million in the second quarter of 2021, but this pales in comparison to the $289 million ActBlue pulled in via online contributions during the same period.

While some political analysis implies that Democrats need to refocus on Trump in order to be positioned for success in 2022, Trump’s waning media presence and influence as well as the Democratic Party’s current fundraising strategy have seemingly been a boon to Democrats vying to maintain control of the House. There is a growing amount of data indicating that Democratic fundraising continues to outpace Republican fundraising, particularly among the congressional incumbents and party organizations that will play critical roles in the upcoming midterm elections.