In the fight for democracy, American business must speak out and divorce itself from the bad guys 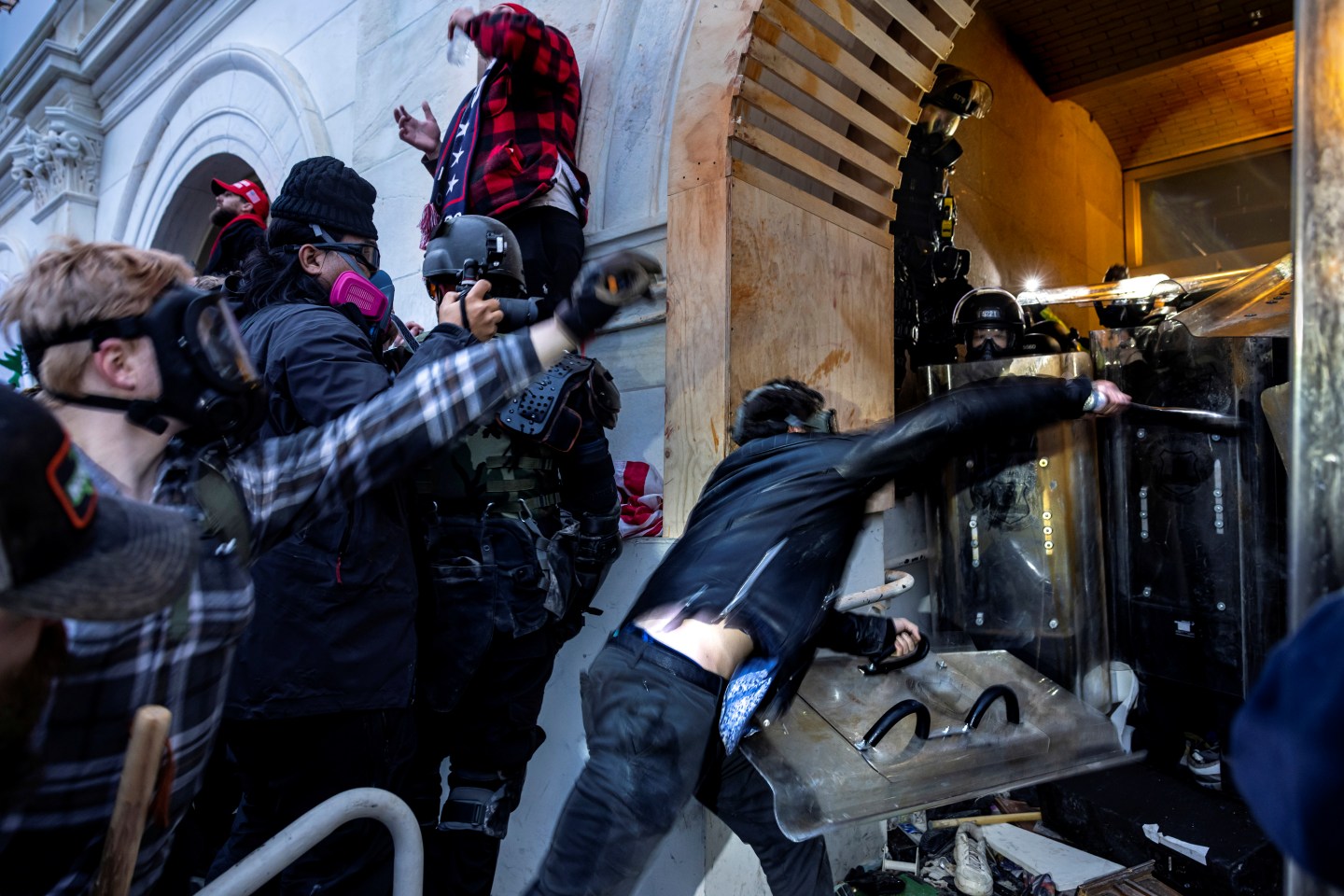 Trump supporters clash with police and security forces at the U.S. Capitol on Jan. 6, 2021. “In a nation swirling with misinformation and moral equivalence,” writes Leslie Dach, “the business community can be a voice for facts and truth.”
Brent Stirton—Getty Images

After the attack on the Capitol on Jan. 6, some of America’s largest businesses and trade associations stood up and took action against the politicians who supported the insurrection or voted to overturn the election.

These efforts were kicked off by the National Association of Manufacturers. NAM deserves particular credit for being the first to condemn the attack and calling for the invocation of the 25th Amendment, which provides for the removal of a President who has become unfit to fulfill the duties of the office. Then companies including American Express and Hallmark announced they were halting campaign donations to members of Congress who, despite the carnage at the Capitol, voted to overturn Joe Biden’s election. Hallmark went even further and asked Senators Josh Hawley (R-Mo.) and Roger Marshall (R-Kans.) to return the contributions they had previously received.

This is a positive development, but many critical questions remain. Where were America’s corporations when the lies were first being perpetrated? Will their halt in political donations be temporary, or will they permanently stop donations to every member who voted to overturn the election? And most important, will they treat the bad guys and the good guys the same, or send a real message by singling out those who voted against our democracy? And what about the other companies that have said nothing and continue to write checks as if nothing happened on Jan. 6?

Reporting by the Washington Post revealed that of the 30 major corporations they interviewed, 22 were either continuing contributions as usual, or suspending contributions to all lawmakers, making no distinction between the insurrectionists and those who stood up for democracy and law and order. Treating the bad guys and the good guys the same way isn’t holding people accountable or creating a reason for better behavior. Judges don’t treat criminals and victims the same way, and neither should corporate PACs.

And, in most cases, there is no clear answer whether donations are just being suspended or permanently halted. That’s not being courageous. That’s trying to get some good publicity out of a tragedy while the cameras are rolling, and then going back to business as usual when the lights go off.

I was head of corporate affairs for Walmart, America’s largest company, and a member of their global management committee. I know the pressure on companies to stay silent on controversial issues, and the delicate balance brands and businesses try to strike in speaking out on issues that go beyond a company’s bottom line. But the standard rules of cautious corporate communication should not apply when the fundamentals of our democracy are at risk. There is only right and wrong.

While the violence that we feared might happen on Inauguration Day was avoided, the threat to our democracy continues—whether in the form of violent right-wing extremists, support for conspiracy theories, or renewed efforts at voter suppression.

American business cannot sit this one out. There must be consequences not just for the insurrectionists who stormed the Capitol but also for the elected officials who fed them the lies that fueled their deadly anger and outrage. Otherwise, these politicians will be given permission to undermine democracy further.

There are plenty of corporations and CEOs who stayed silent this time—or did not speak with clarity. It is not too late for these business leaders to do the right thing. And those who have spoken out, who have halted or suspended contributions, must say now that those bans continue through the next time those members are up for reelection and focus squarely on those Republican members who tried to undermine our democracy.

In a nation swirling with misinformation and moral equivalence, the business community can be a voice for facts and truth. It’s the right thing to do—for business and for America.

Leslie Dach was executive vice president of Walmart from 2006 to 2013. He is the chair of Protect Our Care, a health care advocacy organization.