I’m a McDonald’s worker who was homeless due to low pay. It’s time for a $15 minimum wage 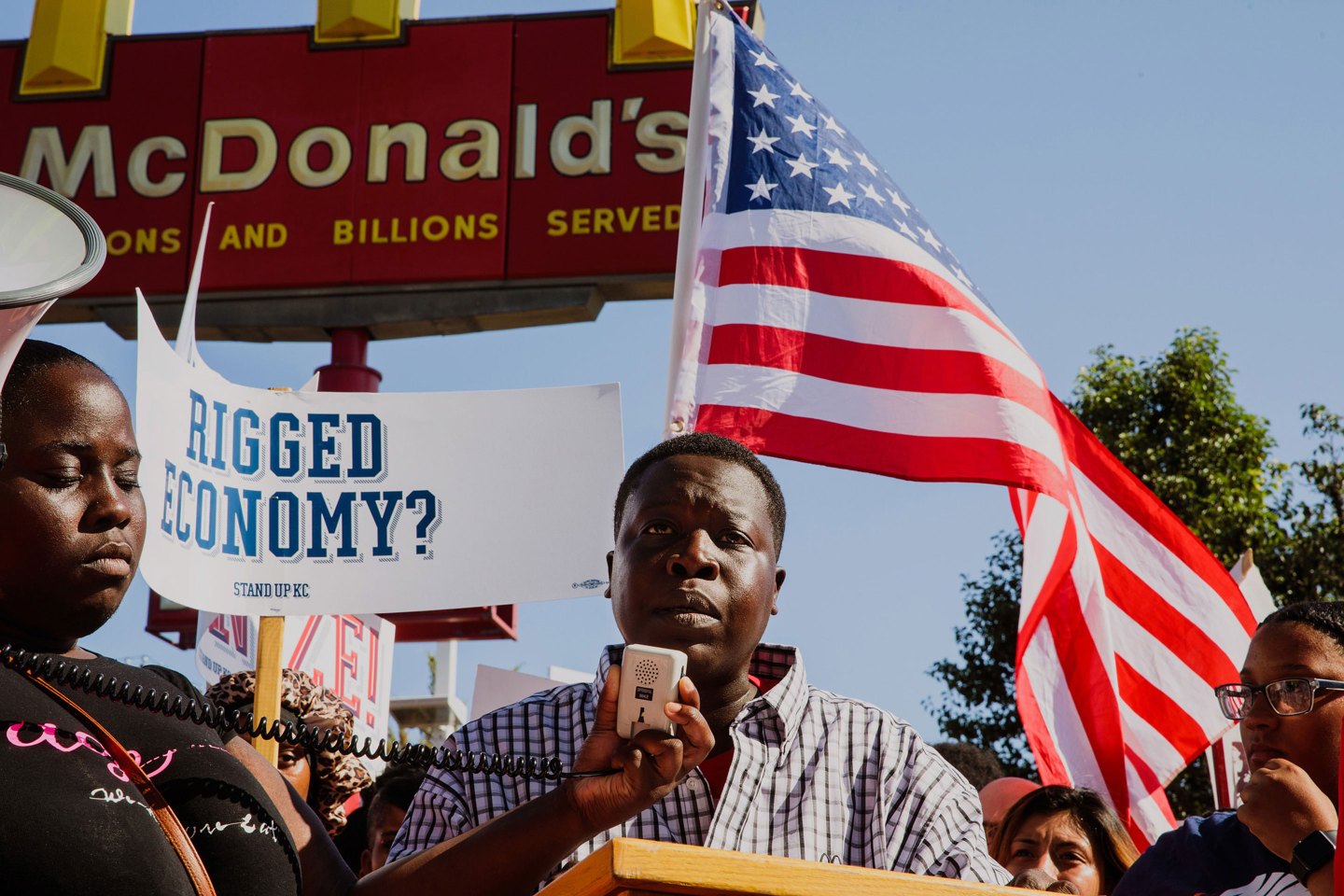 Fran Marion speaks in front of a Kansas City, Mo., McDonald’s after the House of Representatives passed a national $15 minimum wage in 2019.
Chase Castor

Put yourself in my shoes. I am a single mother with two teenagers. I get up every day and go to work for McDonald’s, one of the richest corporations on Earth, but my kids and I have had to deal with homelessness, lack of transportation, and lack of health care because my wages are so low.

That’s why in July 2019, I celebrated along with fast food workers across the country when the House of Representatives passed a bill to raise the federal minimum wage to $15 an hour.

The Senate failed to take up the bill, but that didn’t stop us. We spent the last two years organizing, going on strike, marching in the streets, and electing national leaders who support a $15 minimum wage, from President Biden and Vice President Harris to Georgia senators Jon Ossoff and Raphael Warnock.

We can’t afford to wait any longer for a raise. Today, I’m proud to join Rep. Bobby Scott and Sen. Bernie Sanders as they reintroduce the Raise the Wage Act in Congress, which would finally guarantee that millions of working people in our country earn a living wage of at least $15 an hour.

Biden and these congressional leaders understand that COVID-19 has devastated essential workers and our communities, and that we were struggling to make ends meet long before the pandemic hit.

They’re fighting with us to win a $15 minimum wage because the only way to lift our nation out of crisis is to lift up the tens of millions of working families who are currently being crushed by our rigged economy. Congress must pass the Raise the Wage Act within the first 100 days of Biden’s administration.

I know what $15 an hour would mean for my family and for workers coast to coast. Just over a year ago, my kids and I were homeless. We had to live from couch to couch. It was taking a toll on my mental health and straining my relationships. I jumped at an opportunity to get a place of our own, but found out I was dealing with a slumlord and had to live for a few months in a house that had no running water.

Now, we are blessed to have a safe roof over our heads again. But during the pandemic, I’ve fallen behind on rent and the pressure on me is building again. One of my sons, who is 18, has had to pick up a job working at Sonic just so that we can maintain Internet access for his remote schooling. Living in poverty means moving from crisis to crisis. There’s always some kind of struggle knocking at your door.

I got involved with the Fight for $15 and a Union in Kansas City, Mo., because I knew I needed to come together with other workers and take collective action to win better wages and a voice on the job. We’ve fought like hell, gone on strike, testified in Congress, and changed the conversation in this country around the minimum wage.

Back in 2012, when fast food workers first walked off the job to demand a $15 wage and union rights, many said our goals were impossible. But today, our movement has delivered more than $70 billion in raises to over 24 million workers—we’ve even passed $15 an hour in eight states, putting more than 42% of U.S. workers on a path to $15 an hour.

We’ve seen how much we can change in just eight years, and there’s no way we’re stopping now. Tens of millions of workers are still stuck below $15 an hour. And our demands for $15 have only grown stronger as we’ve faced down a pandemic and nationwide reckoning over systemic anti-Black racism.

But corporations like McDonald’s and some politicians have stood in the way. Cities like Kansas City and Birmingham have passed local minimum wage laws only to see them blocked by state governments—holding down pay for underpaid workers when evidence overwhelmingly shows raising wages lifts up not only workers’ pay but the whole economy.

By raising the minimum wage, Biden and Congress can lift up millions of essential workers—from fast food to hospital, janitorial, airport, and other industries—who have put their lives on the line during this pandemic. We’ve been forced to protest for sufficient PPE and sick days, all while being paid poverty wages. We’ve been called essential workers, but we get treated like second-class citizens.

Raising the minimum wage will have far-reaching benefits, tackling food insecurity, lowering rates of depression and suicide, and reducing child abuse—without leading to job loss. Working families shouldn’t be living on the edge: Every worker—Black, white, and brown, Asian American and Native American—deserves $15 per hour as the bare minimum.

We also can’t forget that Black and brown workers have been disproportionately impacted by the pandemic and underpaid at work. Experts estimate that a $15 wage would boost the incomes of nearly 40% of Black workers, which would finally give us a chance to tackle generations of racial income gaps.

I’ve seen the impact of coming together and demanding justice right before my own eyes. In the face of enormous obstacles, our Fight for $15 and a Union has ignited a global movement for fast food workers’ rights. We’ve brought what was once deemed impossible within reach. A $15 minimum wage isn’t just morally right. It’s also good economics and good politics.

It’s time for $15 to become the law of the land. Congress has the opportunity, and essential workers like me won’t rest until we win.

Fran Marion is a McDonald’s worker in Kansas City.