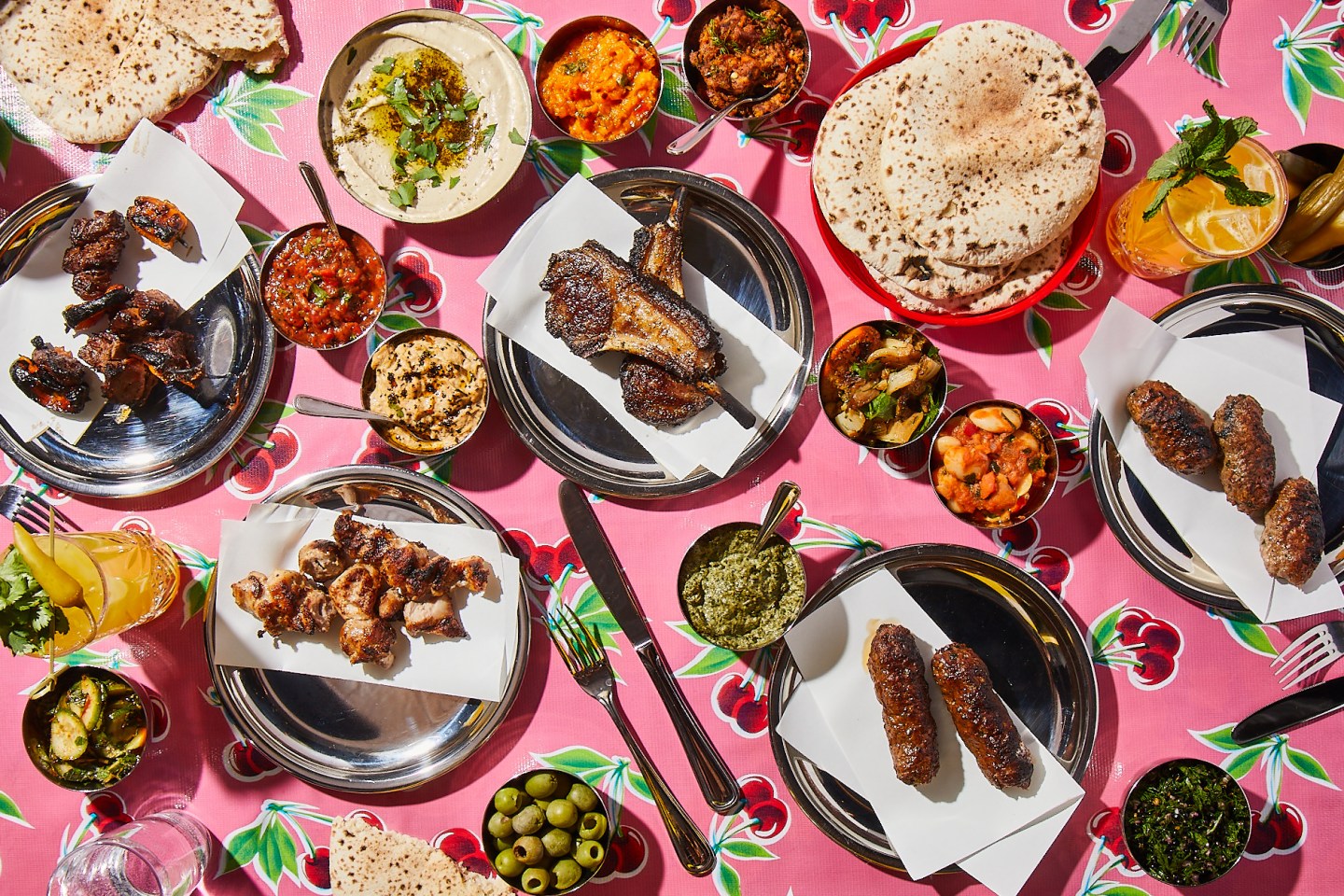 The spread at Laser Wolf, a skewer-house concept in Philadelphia's Kensington neighborhood.
Courtesy of CookNSolo

Michael Solomonov and Steve Cook argue about where the conversation happened—whether it was in the kitchen’s hot pass or cold pass—but they remember exactly what was said with clarity. They were about two weeks away from having to shutter Zahav, the modern Israeli restaurant they opened in Philadelphia in 2008. Though the concept earned recognition and critical acclaim from the beginning, it lacked customers. Solomonov remembers a night they did only 17 covers, before he got a sage pep talk from his business partner.

“When we opened, we tried to be very literal and make things that were very traditional,” Solomonov says. “At one point, Steve said, ‘You’re a chef. You don’t need to be rooted in tradition.’ And that concept and the idea that you can look at Israel as a whole and say, I’m going to take the Yemmenite, the Moroccan, the Palestinian, the European, and put them together, that we have literary license over whatever we’re making. We’re not in Israel. There were a lot of things that lined up then, but that was our approach to food from then on. It was a pivotal moment.”

That pivotal moment was one that shifted Zahav’s momentum, leading to its huge success and, eventually, a James Beard Award for most outstanding restaurant in America in 2019. (Solomonov himself has won three James Beard Awards, including one for outstanding chef in 2017.) Known for dishes like hummus, hot laffa, and lamb shoulder braised with chickpeas and pomegranate molasses, Zahav has made an indelible impact on the city’s food scene. But it’s also credited with helping to put both Philadelphia and Israeli cuisine on America’s culinary map.

The company’s origin story doesn’t start with Israeli cuisine, though. Solomonov grew up with Cook’s wife, Shira, and knew him as “the other Jewish line cook in Philadelphia.” Cook graduated from University of Pennsylvania’s Wharton school of business and worked on Wall Street before switching careers to become a chef. He founded Marigold Kitchen in 2004 in West Philadelphia and hired Solomonov to be his chef soon after. Cook sold the restaurant, and in 2008 the duo leveraged investments from family and friends to open Zahav in the city’s Old City neighborhood. After that rough start, more than a decade in, the dining room is still booked two months in advance, and seats at the bar, held for walk-ins, are fully occupied seconds after the doors open at 5 p.m. People plan trips to Philadelphia around Zahav reservations.

Cook and Solomonov formed the CookNSolo group, following up Zahav with a string of concepts—including Abe Fisher, with chef Yehuda Sichel’s inventive dishes highlighting the Jewish diaspora; Dizengoff, the fast-casual “hummusiya”; and Federal Donuts, which launched a fried chicken and doughnut craze and spurred eight outposts around the city, including a new one in the Wells Fargo Center arena. In the spring of 2017 the team opened Goldie, inspired by one of Solomonov’s favorite falafel shops in Israel.

Named for Lazar Wolf, the butcher in the musical Fiddler on the Roof, the Israeli skewer house has a more laid-back vibe than Zahav—bartenders wear Hawaiian shirts, and the open kitchen becomes part of the entertainment, with chefs turning sticks of lamb merguez, skirt steak, and eggplant over charcoal grills.

Diners pick their proteins, and before the entree arrives, a dozen small bowls of salatim—vegetable salads like crunchy lentil and dill tabbouleh, and kale baba ghanoush—kick off the meal, along with the group’s signature, velvety hummus and freshly fired pita. Prior to opening Laser Wolf, executive chef Andrew Henshaw spent five years as Zahav’s chef de cuisine. (Notably, each of these new concepts is led by someone promoted from within the CookNSolo team.)

Zahav is the kind of place you make a special trip to Philadelphia to experience, with reservations among the hardest to land in the country.
Michael Persico

Cook and Solomonov say the restaurant was something they had originally envisioned for Zahav. “I think we tried to dress it up a lot at Zahav, because we simply didn’t have the confidence—(A), in ourselves, and (B), in the sort of acceptance of Israeli food,” Cook says. Laser Wolf, on the other hand, is more straightforward and simple. “In a way, it’s harder to pull off—it requires a certain confidence. There’s no hiding anything there.” Years of opening and running restaurants have given them that confidence, though. “We know how to do it, things that we’ve already absorbed over the last 11 years make it much less fraught,” Cook says.

It hasn’t been all wins for Philadelphia’s beloved brand. But the company’s missteps, or what Cook calls the “expensive mistakes” they’ve made along the way, have fueled its progress. “People tend to just view us as a monolithic success, and that couldn’t be further from the truth,” he says. Now-closed businesses include Percy Street Barbecue, a Dizengoff in New York’s Chelsea Market, and a Federal Donuts in Miami. “I think those lessons are incredibly valuable…we’ve learned so much about every aspect of our business from our failures.”

On the heels of three new restaurant openings and a big collaboration with Whole Foods Market—Solomonov’s premade Hanukkah meals were available to purchase at every Whole Foods in America last November—the chef says they’re planning to take a beat and focus on reinvesting in their existing restaurants and fostering a healthy company culture for their approximately 300 employees. It seems like CookNSolo has its bases covered for now, though, with an Israeli bakery, hummuseriya, falafel and sandwich shops, and grill.  “I don’t know who coined the phrase,” Cook says. “But we have this little Israeli village.”

—5 things Maria Sharapova always packs when traveling
—Atelier Ace expands with Maison de la Luz
—Inside the most influential fashion show in menswear
—Millennials are passing on wine when dining out
—WATCH: Can San Francisco Be Saved?