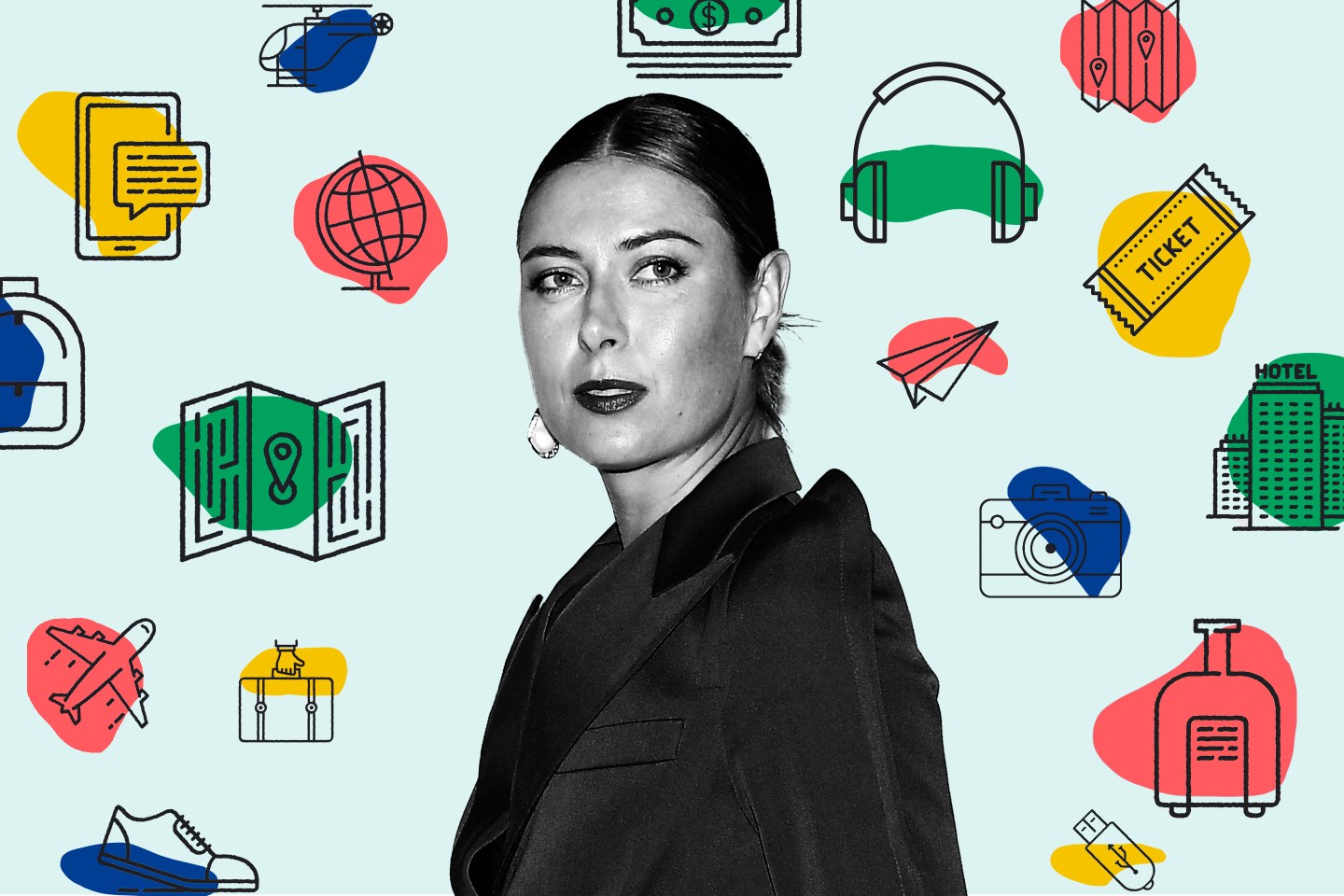 Ever since she became a professional tennis player at age 16, the 32-year-old Russian athlete has spent much of her life on the road. Although based in Los Angeles, Sharapova has spent the past six months living out of suitcases, training in Italy, and taking a break in November with her boyfriend, British businessman Alexander Gilkes, to vacation in Rwanda. The couple stayed at Bisate Lodge, a luxury hotel perched upon an eroded volcano cone; they went on safari and observed gorillas up close at nearby Volcanoes National Park.

“I’ve seen a lot of things, and I’ve been to many places, but at this place, for both us, we did not want to leave,” Sharapova says of the experience. “It was so beautiful, like time was standing still. Trekking to see the gorillas was one of the surreal experiences of our lives.”

Given her extensive travels, Sharapova has honed her basic travel necessities to several must-have items.

Here, in her own words, are the five things she never travels without:

“My friend gifted this to me a few years ago, and I had never used eye masks before on my face, because I usually don’t like things on my face,” Sharapova says. “I’m usually a really good sleeper on the plane, but I like to be comfortable. I like a blanket; I like the whole thing, and I don’t like light. I tried this mask, and for some reason, I’ve just been the best sleeper on the plane ever since, especially on those night flights. So that’s definitely one of my tools I use when I’m sleeping on a plane. It’s just a really big help.” SRP: $50.

The Infinite Game, by Simon Sinek

“I’m always inspired on the plane, and Simon has been on many different podcasts—I just listened to one the other day,” Sharapova says. “There’s something about his perspective that I think has obviously resonated for millions of people, because I think his TED Talk is, like, in the top three most-watched in their history. There’s a way that he speaks about leadership and purpose that’s very natural and really resonates with my own experience and in a way that I can use it in my own life.” SRP: $21.44 for the audiobook; $28 for the hardcover.

“Believe it or not, I love Ella’s baby food, actually in peach, which I eat a lot of during training and sometimes during matches,” admits Sharapova. “They taste really good, and they’re pureed, so they’re just easy to consume. When it comes to guilty pleasures—and I have a lot of them—I’m a little biased towards my candy company, Sugarpova. I do a lot of research. I go online. I find the local chocolate shop or the local fudge place. If I’m at the airport, and I find it at the store—like, we’re in Hudson News at the airport—I actually get two bags, and I ask the store managers or the clerks who are selling the candy. I’m like, ‘Have you heard of this company? How’s it doing?’ I ask all these questions. And then I say, ‘Would you like to try it? Because I’m the owner.’ So I usually buy two bags, and I give them one. And I take one for me because I’m like, ‘Okay, well, one for me, one for you.’” SRP: $10.34 for Ella’s Kitchen products; $3.49 to $12.99 for Sugarpova snacks.

“It’s honestly one of my favorite travel pieces, because I love how convenient it is,” says Sharapova. “It’s actually very spacious. Most of the time, I actually travel with a lot of bags, and most of the time, my carry-on is actually my tennis bag. Or I’m going somewhere for a few days of meetings, and I can just pack a carry-on, and I rarely get to do that. But you can tell when I’m in vacation mode. If you ever catch me twirling it around with those wheelies, then you’ll know—and that’s when I’m a happy girl.” SRP: $770.

“Skin in general after traveling can be very unpleasant, and I rarely travel with makeup on,” Sharapova says. “So there are two main reasons why I love this: one being that you usually look very strange when you are wearing a mask, and the best part about this mask is that it’s like a mask moisturizer—it doesn’t look like you’re wearing a mask. So you put on as many layers as you want. It might come off a bit creamy, but it kind of soaks into and blends into your skin, and it’s not noticeable at all. You don’t even need to wash it off after—or you can.” SRP: $120.