The Magic of the Wedding Industry’s Most Exclusive Conference 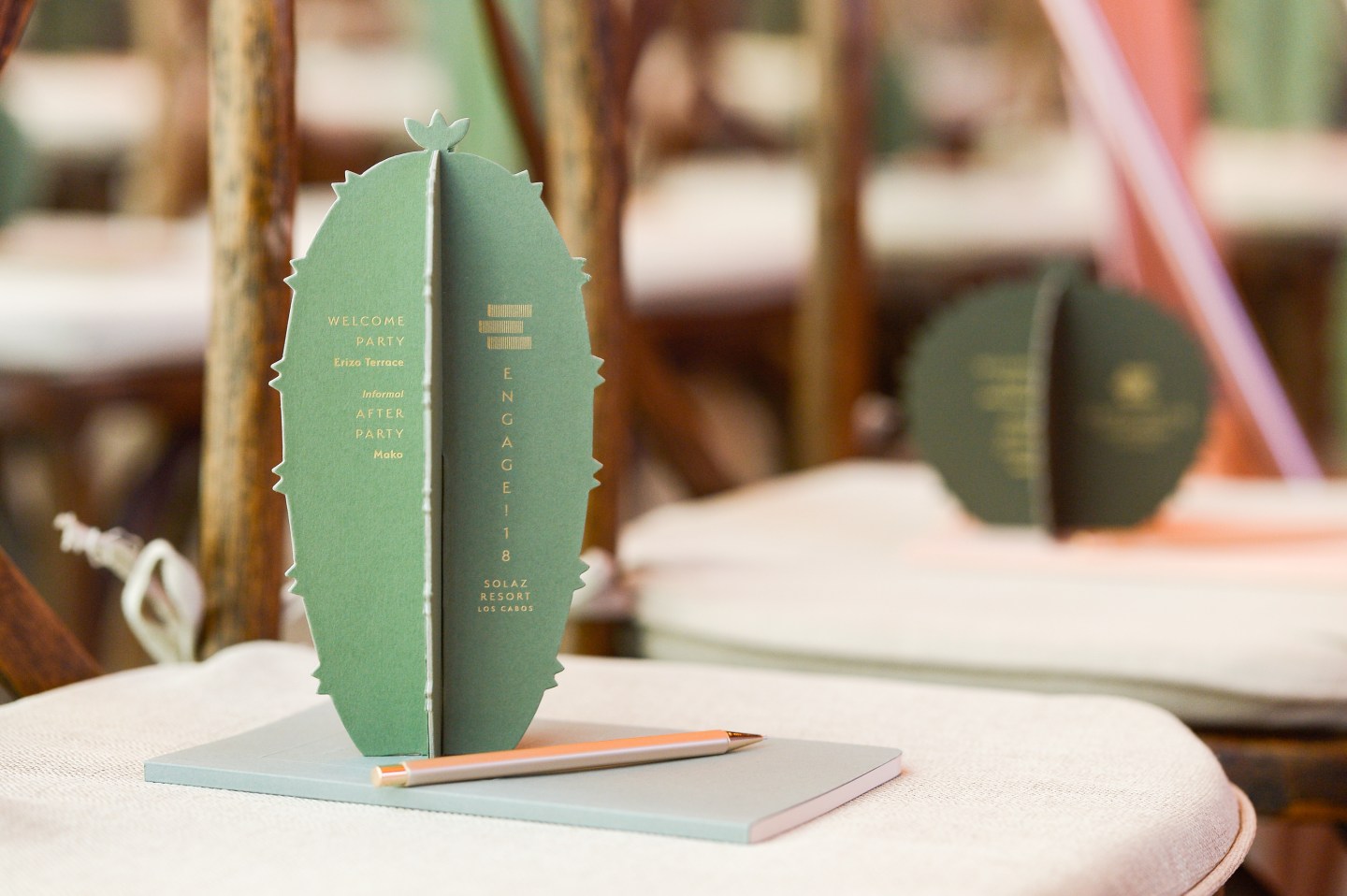 Imagine going to a wedding reception that’s better than you could ever have fathomed, from multi-course menus to over-the-top decor and live music. There are guests in fabulous designer outfits from all over the world. Everyone has an interesting story. There is endless Champagne and tequila. It blows your mind…but then you realize it’s not someone’s nuptials at all. It’s the gala for a business conference.

When Rebecca Grinnals and Kathryn Arce started Engage! Summit, the concept was simple: create a safe space for wedding professionals to engage. There, wedding planners, photographers, florists, venue coordinators, and other vendors could focus less on their competition with one another and more on how they can be better business owners, creators, and guides for their couples during the wedding planning process.

Twelve years later, the initial small gathering of 75 has grown into a full-fledged network of thousands of event pros who attend the conferences around the world. The pros listen to TED-esque talks, take part in breakout sessions, make valuable relationships during dine-around luncheons and pool parties, and generally still do what they did at the very first meeting: engage.

“There will always be certain celebrations in life,” Grinnals says of weddings. “They are happy times that bring family and friends together. You can’t really find another industry that taps into creativity and connects people.”

Kathryn Arce (left) and Rebecca Grinnals are best friends who decided to launch a conference together in 2008.

Arce and Grinnals first met while working at Walt Disney World in Orlando, a city they both still call home. There, the pair were part of the team that launched “fairy tale” weddings at the park, including at the popular Cinderella Castle. As part of their roles, they spoke at numerous trade conferences across the country, slowing realizing that there was a real need for those serving the luxury end of weddings and social events. As much as they loved their Disney family, the two eventually went their separate ways professionally, but stayed in touch personally.

By June 2008, though, they had found a new project to launch together as independent entrepreneurs: a conference focused on luxury wedding planners who worked with events totaling six figures or more. “At that time, it was very segmented and quite competitive,” Arce says. “People did not work together—lots of silos and not a lot of trust.”

She and Grinnals decided they could change that by putting them all in one room. The first event was a single-day workshop in Celebration, Fla., with lunch and a gift bag that brought together a few dozen people and cost $799. The following year, they tried it again, this time as a three-day conference in the Cayman Islands.

“We had to do a lot of convincing direct competitors to share the same stage or even a panel together, from bridal magazine editors who were sworn enemies or designers who barely spoke to each other,” Arce recalls. “We were insistent that we were all better together.”

The women were clearly onto something. Engage has now held 29 events, from Florida to as far away as Sardinia and Ireland. The next event in March 2020 takes place in Dubai. It costs $4,500 to attend. (Not including airfare or accommodations, which brings the total to much more.) But guests get far more than a boxed lunch.

When you put hundreds of event pros in the room, you’d better expect that they will try their hands at some pretty progressive stuff, from synchronized swimmers and aerialists at the after-party to turning a ballroom into a train car for a vintage travel–inspired meal. Each day comes with educational content, as well as a dress code fitting the destination, be it The Breakers in Palm Beach, Nizuc in Cancún, or the Rosewood in London. Each summit culminates with a formal gala celebrating all things wedding at the destination. Even the gift bag has expanded to an entire gifting lounge and monogrammed totes.

There are informal opportunities to connect, such as during a breakfast excursion (for morning people) or a rave-style after-party (for night owls). It’s certainly a party by party planners but not without serious conversations, from how to best work with LGBTQ couples to diversifying your business revenue streams to cultivating a team of creative personalities. It’s brought together everyone from celebrity wedding planners and designers like Marcy Blum and Preston Bailey to the next generation of talent who are seeing their brands grow quickly thanks to the partnerships forged at Engage.

“Someone could be your biggest competitor, but when we’re in the same room at Engage, we’re just a big family, with the same struggles, the same successes, and the same room for improvement,” explains Vanessa Kreckel of TPD Design House, who has been attending for 10 years. “The connections made here personally have changed my business and my life.”

Kreckel says that Engage has helped reinforce a natural progression in the industry: that each wedding and social event is about the experience, not just pretty decor. “So many people can make an event pretty, but how does it tie into experience and activations that create memories and conversation? That’s what it’s about,” she adds.

Couples today forgo many wedding traditions and opt in only for those that feel authentic to who they are. All the touch points of the day are customized to what the pair likes, from serving their favorite drinks during cocktail hour to a bride wearing a jumpsuit instead of a gown or a groom putting a Lego minifig in his boutonniere.

“It’s so much about your wedding being a complete reflection of who you are as people,” Grinnals explains, “versus what it was 10 years ago, which was almost like a wedding was a one-time, isolated event. Wedding now fits into lifestyle.”

Grinnals underscores the importance of hearing from people outside the wedding industry, which is why the conference invites speakers who are business consultants, poets, authors, financial advisers, media trainers, marketing professionals, and fashion designers. “We create environments where you are forced to step outside of your comfort zone,” she says. “A lot of time that’s where the magic happens.”

It’s one of the major reasons that Engage is now seeing a shift in its guest list to more than wedding vendors; corporate event planners are getting into the mix, from Silicon Valley tech companies, Hollywood entertainment agencies, car brands like Lexus, insurance companies, and even major banks. They are finding new ways to better connect with employees or clients—or both—as well as the creators to pull them off.

“It’s so incredibly gratifying to make people feel so connected all around the world,” Grinnals says. “You’re in a room with people from 35 countries, and you’re realizing we’re all the same: to connect and share ideas, then go back to clients and bring magic to them.”