What to Watch in Theaters Over Christmas 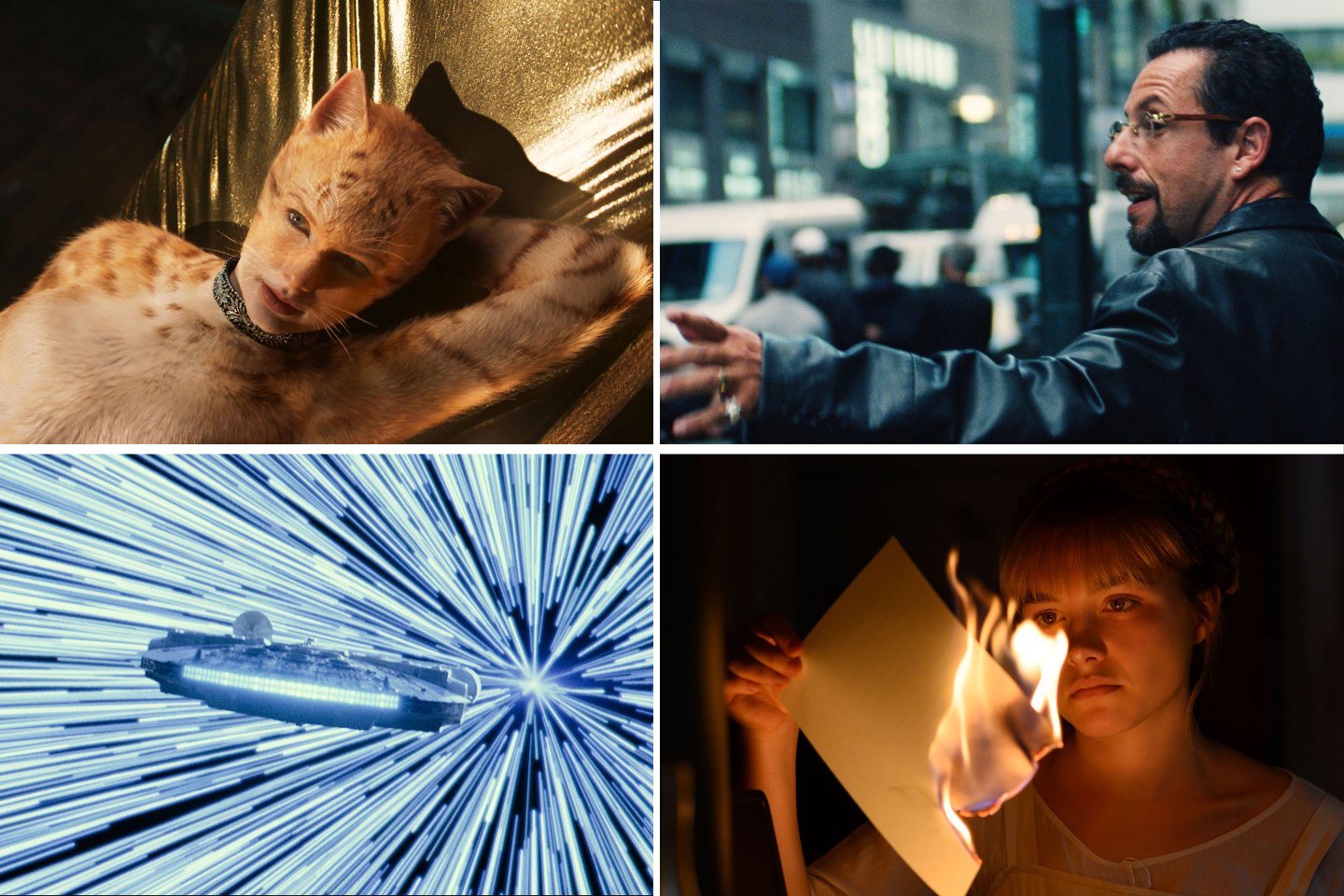 “Tis the season to gather around the fire with your loved ones and remember all the joy and warmth this past year may have brought. But when that gets old, it’s also the perfect time of year to head to the movies.

December is in many ways the pinnacle of the year’s cinema, housing as many anticipated studio tentpoles as it does awards-season hopefuls, which means audiences are spoiled for choices when it comes to picking out something at the marquee or in the streaming marketplace.

While the likes of Knives Out, A Beautiful Day in the Neighborhood, Daniel Isn’t Real, and The Report offered Thanksgiving diversions worth catching if food comas kept you indoors during that long weekend, here are Fortune‘s recommendations on what’s worth catching over the holidays.

Early in Uncut Gems, a New York jeweler brings out one of his shop’s prized items to show a client: a bedazzled Furby, dangling from a gold chain, with eyes engineered to move unnaturally back and forth. The item in question—a ’90s curio blinged up to impossible excess—is a truly ungodly creation, ostentatious and unexpectedly horrifying, those big sorrowful eyes trapped within an ornate, gem-encrusted frame, unable to comprehend that which encases it.

It’s a small moment containing multitudes, and in some ways the key to understanding the brilliantly orchestrated chaos enveloping Uncut Gems, a thrashing electrical cable of a crime-thriller from Good Time filmmakers Josh and Benny Safdie. Set against the dense cacophony of New York’s diamond district, the movie stars Adam Sandler as Howard Ratner, a brash jewelry dealer perpetually kicking up to the surface with some get-rich-quick scheme even as his past five such schemes threaten to drag him under. To Howie, it’s all just business. As he wheels and deals with a relative (Eric Bogosian) and heavily armed loan sharks, to whom he’s hopelessly in debt; with Celtics player Kevin Garnett (playing himself, excellently), to whom he’s hawking a rare Ethiopian gem; and with the women in his life (Julia Fox, as the brassy mistress who won’t leave him, and Idina Menzel, as the wife who can’t wait to), Howie guns through life like a rat in a maze, addicted to the near-escape and the promise of another big score just around the corner. As he does so, alienating everyone around him, the walls start to close in.

Played by Sandler as the cogito-ergo-sum of his ambitions, Howie is in many ways the human embodiment of that Furby, a soul held hopelessly in place by the transactional madness of his reality. And the Safdies’ film, one of the year’s most sneakily brilliant, is a damning middle finger to materialism as an industrial and psychological complex, an electrifying tour through the broken state of the American dream led by its most craven acolyte: a self-made man made of nothing more than his breakneck bluffs and intoxicating force of ego.

For more, read our original review out of the New York Film Festival.

A truly sublime match of subject to artist, Greta Gerwig’s adaptation of Little Women unfolds as such a dream it could be set within a snowglobe.

As realized by this particular writer-director (Lady Bird), the enduring story of the March sisters has always been most about time and memory, the way we keep records of our lives through the people we love, and the ways we love them. Weaving together vignettes from the sisters’ adult lives and their shared childhood, lending scenes of youth a distinctly warm glow, Gerwig’s Little Women is a celebration and a eulogy in one. It is that rare film about childhood as nostalgic and yearning for its rose-colored pleasures as it is clear-eyed about the inevitable grief of its ending.

Breathing new life into Louisa May Alcott’s 150-year-old novel is not exactly a new challenge (Gillian Armstrong’s 1994 adaptation may stand the tallest, but there are seven other film versions in all). But Gerwig—whose solo directorial debut Lady Bird elevated her from mumblecore savant into a quickly venerated “voice of a generation” filmmaker—sets her Little Women apart with an unconventional structure, isolating a form of dialogue between scenes of childhood and adulthood that elevates the meaning of both. As the work of costume designer Jacqueline Durran, cinematographer Yorick Le Saux, and composer Alexandre Desplat swirl in tandem with Gerwig’s story, the film feels bold and timeless, urgent yet respectful. It is in many ways a marriage, between Alcott’s story and characters, and Gerwig’s quietly radical reinterpretation.

The spirited, self-possessed Jo (Saoirse Ronan), long Alcott’s best encapsulation of herself on the page, is as well Gerwig’s reflection of her own ambitions; viewers meet her in a publisher’s office, determined to maintain control over her own narrative. As she looks back on her own childhood, affording it a new measure of empathy and introspection, so do we, understanding Jo and her sisters not simply as teenagers but as halves of a whole, women in the process of becoming. It’s a gambit that blurs the lines between past and present, adding intriguing layers to the film’s exploration of hope, hardship, and personal autonomy in a time of restricted roles for women.

The character best served by this device, though, is Amy (Florence Pugh), who’s never been more fully realized on screen. In the past seen as a less likable foil to Jo, defined by her antagonism toward her, Amy comes alive in Gerwig’s telling as a strong-willed, sympathetic figure with dreams all her own—despite growing up in her older sister’s shadow. As Meg (Emma Watson) tells Jo in one moment, “Just because my dreams are different than yours, it doesn’t mean they’re unimportant.” Gerwig’s greatest triumph with this Little Women may be perfectly articulated by that sentiment: her imbuing of each March sister, not just Jo, with a full and individual sense of humanity, one that lends their triumphs and tragedies a richer emotional impact.

Gerwig’s ensemble only deepens this intention. Ronan, Pugh, Watson, and Eliza Scanlen (as Beth) play beautifully off one another, but they showcase individual grit and personality. Ronan and Pugh, in particular, deliver towering performances while occupying unique poles within the film. Timothée Chalamet is perfectly cast as the lovelorn Laurie, close friend to the March sisters and eventually more than that to two of them, though the logic of Alcott’s original love triangle actually makes more sense given the distance Gerwig creates within it. In supporting roles, the adults—wily battle-ax Aunt March (Meryl Streep), the good-hearted Marmee (Laura Dern), Mr. Laurence (Chris Cooper), and Mr. March (Bob Odenkirk)—give such generous performances as to emerge fully formed.

But the real triumph of Little Women is Gerwig’s. Her film is about growing up, letting go, and becoming, and it is beautiful in how it addresses these processes as subtle, inescapable truths around which life molds itself. For a second film, it’s gorgeously composed; and as meditation on family and youth, it’s both disarmingly kind and impossibly wise, a tonic for this dark time of year that offers moviegoers a kind of solace as spiritual as it is personal.

‘Star Wars: The Rise of Skywalker’ (In theaters)

Star Wars: The Rise of Skywalker amounts to little more than a beloved franchise eating its own tail. It’s a potentially fatal overdose of nostalgia, content to re-stage classic moments from this enduring saga without logic, humanity, or even a sense of grace. That it’s a betrayal of the universe-expanding filmmaking pulled off by The Last Jedi, this trilogy’s middle entry, was to be expected after the backlash that film received. That it’s barely a movie, even on its own terms, is a rather stunning surprise. All this said, audiences have invested in the continuing adventures of the Skywalker clan and their allies and may glean some form of closure, at least, from this final entry. Check out Fortune’s full review of the Star Wars trilogy topper here.

Cats has always been an inmates-running-the-asylum kind of joint. The film adaptation, by director Tom Hooper, isn’t as deliriously thrilling, nor as visually astounding, as it should have been, but it’s nevertheless one of the most memorable times you’ll have at the movies this year. Three words: Idris Elba cat. Check out the review of Hooper’s hairball extravaganza here.

—How Vevo’s artistic and scientific approach to music videos is paying off 10 years later
—Gillian Jacobs crosses Succession with #MeToo in scripted podcast Blood Ties
—How Netflix transformed the peak TV terrain in the 2010s
—Why these high-profile book adaptations bombed at the box office in 2019
—’Tis the season for holiday movies—and Hallmark and Lifetime aren’t afraid of Netflix
Follow Fortune on Flipboard to stay up-to-date on the latest news and analysis.