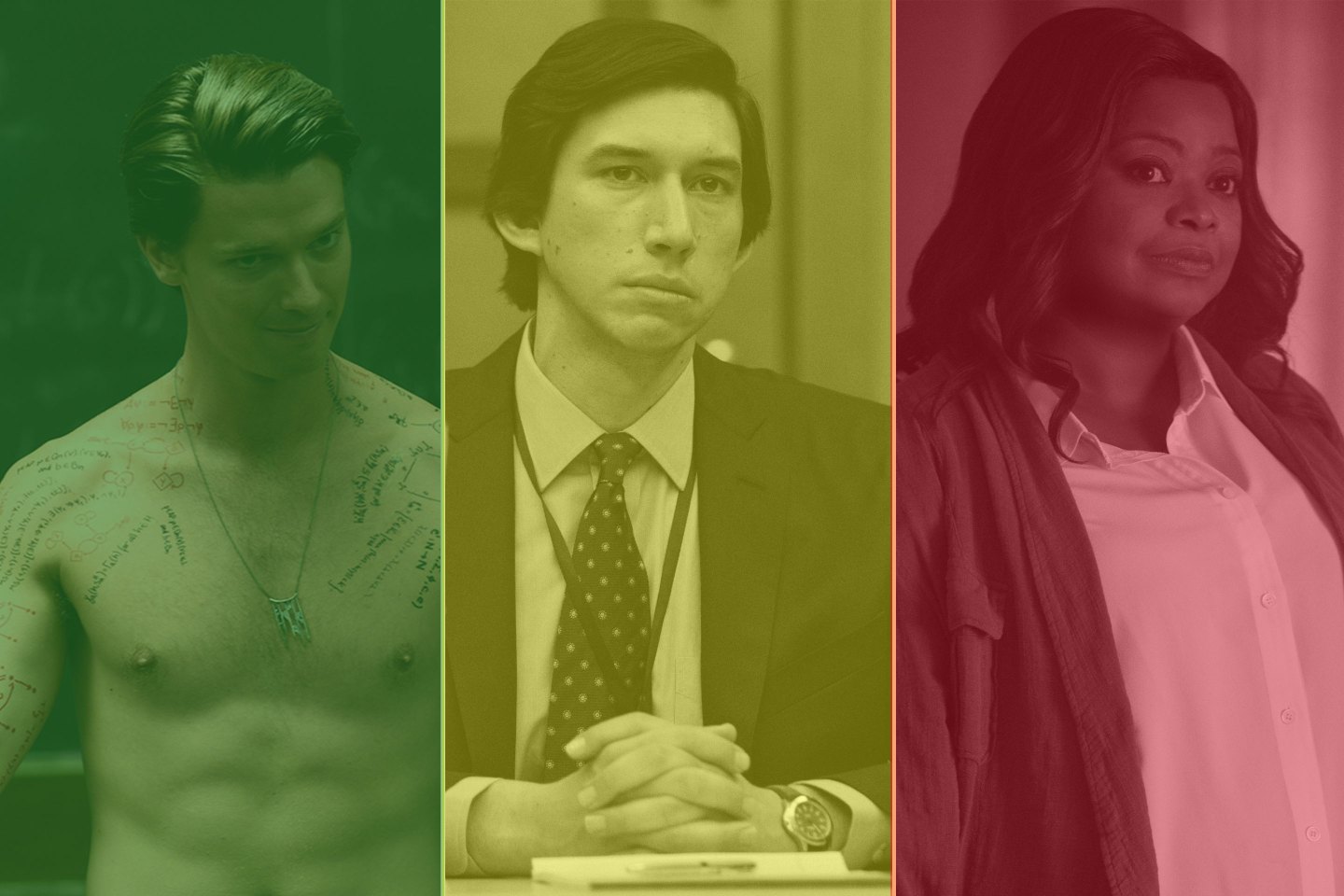 Fortune‘s here to help you navigate the week’s offerings, boiling all the entertainment out there down into three distinct recommendations: should you see it, stream it, or skip it? Find out below.

The psychothriller Daniel Isn’t Real is one of the better genre discoveries of the year in how it takes some mightily familiar genre parts, among them undiagnosed mental illness and a malevolent synth score, and brings them somewhere unexpected.

A breakthrough second feature for writer-director Adam Egypt Mortimer (Some Kind of Hate), this tense and surprising riff on the concept of imaginary friends is built primarily on the performance of its two leads. Young mophead Luke, played by Miles Robbins, a terrific comic find in Blockers who displays welcome dramatic chops here, had an imaginary friend when he was younger, a dark shadow of his impulses that externalizes itself and told him to do bad things, especially to his mentally unstable mother.

Luke was eventually able to lock said friend away, but Daniel Isn’t Real picks up in his freshman year of college where, amid the myriad changes that time brings for young people, Daniel reemerges, played as a baleful, bad-boy genie by Patrick Schwarzenegger. And this time, Daniel’s designs are even darker, and everyone in Luke’s orbit—from college peers to a young artist (Sasha Lane) he’s struck up a relationship with—has reason to be afraid.

This premise, at first blush, is nothing particularly new, though Mortimer visualizes Luke’s descent into madness with a restless energy and canny knack for finding the right, creepiest angles to tell that story. But Daniel Isn’t Real, somewhere around the midway mark, morphs into something much more ambitious and interesting: a cosmic horror with some grotesque elements of Cronenbergian flesh-rending, reminiscent of last year’s Mandy.

As Daniel endeavors to possess Luke, he threatens to literally tear open his body so as to inhabit it; a key scene in a shrink’s office where Daniel boastfully asserts his hold over Luke leads to one of the most surprising and gasp-inducing scares of the year. And as both circle a richly psychological and literal abyss, encountering the monsters that live nearest its edges, the film ascends into something that feels both allegorically and technically impressive: a truly original directorial vision brought to life with visual flair and narrative verve.

STREAM IT: ‘The Report’ (Amazon Prime)

After the Sept. 11 attacks, the CIA created detention and interrogation programs aimed at preventing future attacks from taking place on American soil. Mismanaged, overrun with lies and more insidious power abuses, the program—during which detainees were subjected to “enhanced interrogation techniques” as heinous as waterboarding and rectal feeding—constitutes a deeply shameful chapter in recent national history.

Knowledge of it only became public in large part thanks to the efforts of Daniel Jones, a dedicated civil servant who spent seven years investigating the program at the behest of Democratic Sen. Dianne Feinstein, then compiling his findings into a 6,700-page document. After a torturous and arduous progression through the bowels of government, Jones saw 500 heavily redacted pages of the torture report become public in 2014.

The Report, the writer-director debut of Scott Z. Burns, is precise, even granular, in how it charts the course of those seven years, following Jones (Adam Driver) as he struggles to track down truth about the CIA’s torture program.

Burns—best known for writing Soderbergh scripts The Informant! and Contagion—treats Jones’s ordeal like the stuff of a modern American, Kafka-esque odyssey, boring down into the intense and punishing process through which he poured over 6.3 million pages of documents to get answers that the CIA, eager to absolve itself of accountability, wanted to keep buried.

“No documents are allowed to leave the room without CIA approval,” an unnamed CIA official tells Jones as he looks around the room where he and his team began pouring over documents, and notices the lack of a printer. “Paper has a way of getting people in trouble at our place.”

Jones looks back at him. “I think at some point we’re going to need a printer and paper,” he says, carefully. “At our place, paper’s how we keep track of laws.”

The film’s ancestors are paranoid thrillers like All the President’s Men and The Parallax View, dark thrillers of political cover-up and spin. But unlike them, The Report is not the story of a whistleblower, as much as Jones throws his hands up in protest of the cynical and cyclical way in which government entities protect themselves at the cost of the truth. It’s through perservering in his efforts to push the report out to the public via the proper channels that Jones was able to enact change and bring to light a terrible evil perpetrated by the U.S. government.

The film’s a timely and thought-provoking look at the way in which governmental process can still function, and withstand serious tests, if the individuals going through them do so with integrity and are willing to hold one another accountable. That feels like an important movie for this specific political moment, as the American public struggles with a crisis of faith surrounding its elected officials and looks for some new definition of the word “patriot,” one that connotes not jingoism, violence, or bigotry but true love of country and purpose in defending it. Politics are often viewed, and depicted on screen, as a murky morass through which morals and intention are subverted and eroded. The Report offers an alternative: a clear-eyed, tremendously thrilling exploration of what can be accomplished through holding fast to one’s ideals.

Octavia Spencer and Aaron Paul topline this new Apple TV+ series, but the presence of two dramatic actors so acclaimed turns out to be little more than a bait-and-switch.

Merging the glossy soap operatics of How to Get Away with Murder with a doomy, faux-David Fincher aesthetic, this exploration of true crime and consequence isn’t the worst series unveiled on Apple TV+ in recent months. (That ignominious honor goes to either The Morning Show, utterly stagnant despite its pedigree, or See, a how-did-this-get-made dystopian epic that plays more like a 30 Rock gag than Game of Thrones.)

Truth Be Told at least offers the germ of a good idea, steeped in the eerie, voyeuristic calculus of our cultural obsession with true crime. Its protagonist, the gloriously named Poppy Parnell (Spencer), is a successful journalist-turned-podcaster in the vein of Serial host Sarah Koenig, who earned her success some 20 years earlier while covering a heinous murder case. Poppy’s stories pointed the finger at a teenage boy, who was then tried and sentenced for the crime. When Poppy’s conscience, and some new evidence, catches up with her, she reopens the investigation herself, increasingly sensing that the man she helped put behind bars (now played by Aaron Paul) may be innocent.

The boy’s mother (Elizabeth Perkins) is terminally ill; and when Poppy comes sniffing around she’s understandably skeptical as to whether the journalist is more than just another vulture circling. And the twin daughters of the murder victim, both played by the great Lizzy Caplan, are even more loathe to talk to Poppy; when one sits to listen to the podcast, Reconsidered, that Poppy launches, she’s plunged into a fugue state and near-paralyzed by the memory of her greatest trauma. These aren’t characters in a mystery; they’re broken people that unburying this story will likely shatter further.

There’s a juicy, compelling reckoning with our present popular culture to be had within a series like this, an under-the-hood inspection of what it is that so invigorates us about cracking open cold cases and turning the worst days of our fellow citizens’ lives into fodder for the morning commute. Creator Nichelle Tramble Spellman adapted the series from Are You Sleeping by Kathleen Barber, but that novel in turn was essentially a dramatization of Serial (Koenig also consulted on the series).

When Poppy begins interviews with the alleged murderer, there’s also a combustible racial tension in the air: the convict, in his years behind bars, has embraced life in the Aryan Brotherhood and decorated himself in swatstika tattoos, and the look in his eyes when he stares down Poppy isn’t that of a hapless victim but a boy who was forced to become a wolf.

That the series is set in Oakland, with that city’s deep history of racism and lived pain for black residents, only intensifies the charge, as does a side plot involving Poppy’s tangled relationship with her Black Panther father (Ron Cephas Jones) and loving but conflicted sisters, played by Tracie Thoms and Haneefah Wood.

But the problem with Truth Be Told turns out to be twofold: there’s both far, far too much going on, and none of it is handled by the writers with the grace and sensitivity such material demands. As a result, it all veers into the wrong kind of unintentional camp, played deadly serious through sputtering bouts of dramatic inanity, from love triangles that logically make no sense to musty clichés as played out as that of the “evil twin.” The series feels in line with Apple’s other already-launched series in that it’s a decent idea with no clue how to execute itself. And after four episodes, there’s no sense it’ll right itself within this first season. If, like the rest in Apple’s stable, it comes back for a second run, perhaps some maneuvering could salvage the strong parts of this misshapen vehicle. But these early episodes feel disappointingly dead in the water.

—The Mandalorian composer Ludwig Göransson on crafting a new Star Wars Soundscape
—Sundance 2020 will host one of the film festival’s most diverse lineups
—The Aeronauts director on how he pulled off the high-flying adventure film
—South Korean anti-trust complaint over Frozen 2 alleges more monopolistic behavior by Disney
—Knives Out: Rian Johnson and composer Nathan Johnson discuss their cousinly collaboration
Follow Fortune on Flipboard to stay up-to-date on the latest news and analysis.