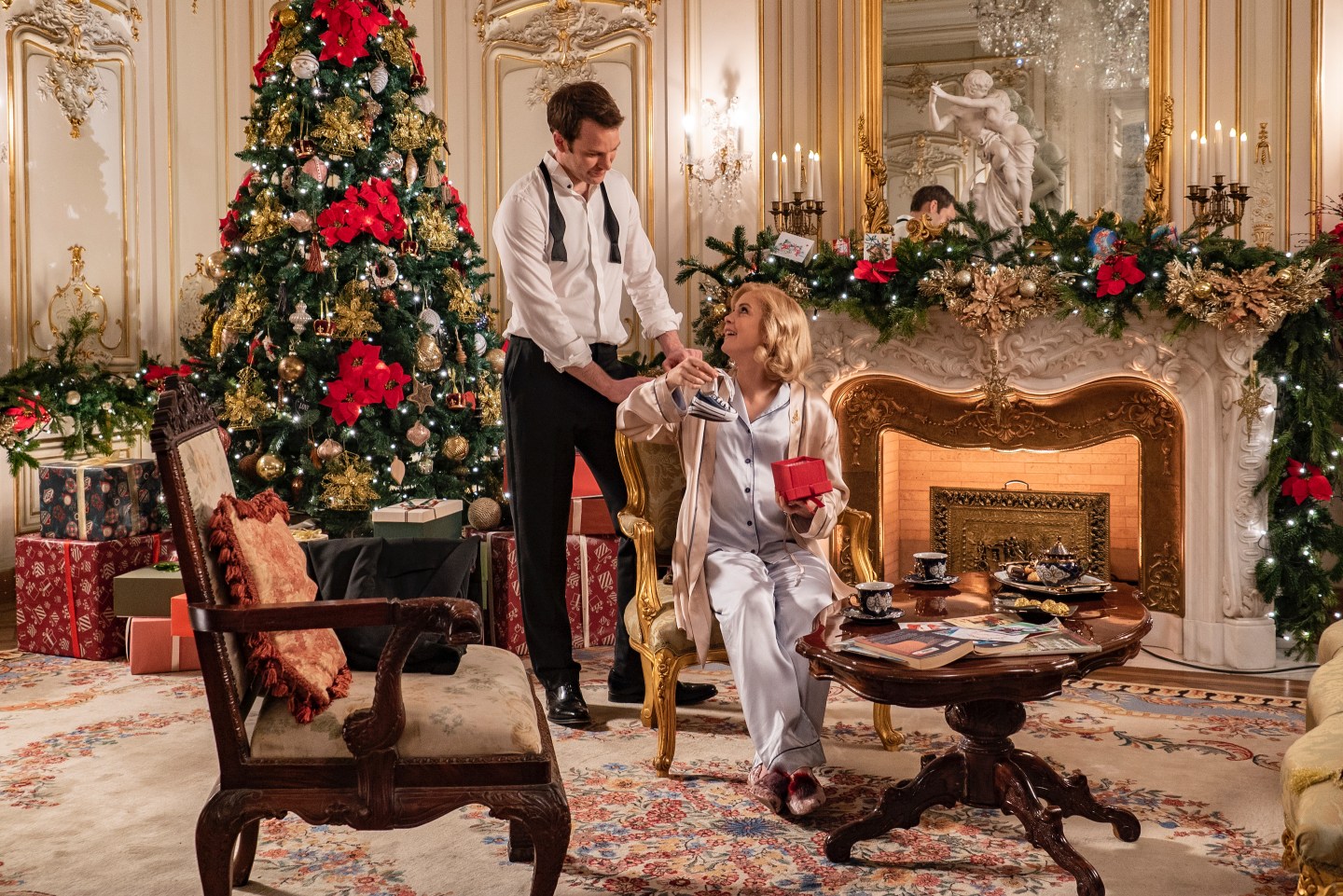 Imagine you’re trapped inside a Christmas movie. What would it look like? Would there be an indomitably cheerful grandmother baking an endless supply of cookies? A handsome, small-town innkeeper helping you “save Christmas”? Someone leaving you handmade cards on your bedroom window while you sleep?

The grandmother-they-never-had appears with cinnamon waffles; the Christmas-loving sister decides to salvage the town’s yearly festival with aforementioned handsome innkeeper, played by a Disney Channel star of yore; and Lacy proceeds to get stalked by the local baker/animal shelter volunteer (spoiler alert: They fall in love).

“We wanted to write a Christmas movie that really celebrates Christmas movies more than we make fun of them,” says Daugherty, who also cowrote A Christmas Movie Christmas with her husband, Brant Daugherty, who plays her love interest in the film. Brant’s character, Kimberly assures me, “is sweet—he just doesn’t know that what he’s doing can come off as creepy.”

Tropes like these, from handsome, obsessive lovers to hot cocoa and baking scenes, come from a holiday programming tradition years in the making. Starting with Lifetime, Hallmark, and ABC Family (now Freeform), networks like UPtv, ION Television, and OWN, the Oprah Winfrey Network, all began producing cookie-cutter Christmas classics in which girl returns to small town for Christmas, meets or reunites with small-town man, and falls in love with him while planning some sort of Christmas event. This type of made-for-TV movie has only grown more popular year over year, with holiday movie debuts now beginning in late October to keep up with the steadily increasing demand.

Two years ago, another player threw its hat into the holiday movie arena. With formulaic films like 2017’s A Christmas Prince, 2018’s The Princess Switch, and 2019’s The Knight Before Christmas (the latter two starring Vanessa Hudgens), Netflix has proved it can produce for yet another niche genre. “This year, after seeing such positive consumer sentiment last year with holiday films and series, we wanted to give consumers more,” says a Netflix spokesperson. “So we expanded a little bit.”

This means Netflix has produced a variety of holiday movies for this season, ranging in style and budget. There’s the animated, family-friendly Klaus, by Despicable Me creator Sergio Pablos, and the young adult flick Let It Snow, based on the novel by John Green and coauthors, which follows a diverse cast of teens navigating the holiday season. Meanwhile, the films starring Hudgens stick closer to the sort of script A Christmas Movie Christmas gently parodies.

Generally regarded as a film and TV industry disrupter, Netflix has pried people away from theaters and made them intolerant of commercial breaks. Now that it’s homed in on the holiday season, could it lure viewers away from Lifetime, Hallmark, and their many imitators? Or is this just another symptom of an enduring dedication to the uncomplicatedly “cozy” (a buzzword among these networks’ programmers) holiday movies in an endlessly dark news cycle?

The origin of the ‘Hallmark holiday movie’

Hallmark would like you to believe that it invented the made-for-TV holiday movie, but Lifetime’s senior vice president of original movies, coproductions, and acquisitions, Meghan Hooper, will tell you that’s not true. “Hallmark has done a very good job at messaging that they’ve created this space,” she says, but Lifetime premiered its first holiday TV movie in the 1990s. Hallmark, though it stems from the Hall brothers’ company that sold Christmas cards since the early 1900s, aired its first holiday flick, Santa, Jr., in 2002.

Dolly Parton is pictured in the Hallmark Channel’s “Christmas at Dollywood,” which is among the holiday films airing on the cable network in 2019.
2019 Crown Media United States LLC/Photographer: Curtis Hilbun

Audience enthusiasm prompted both networks to expand their holiday offerings in the 2010s. Hallmark’s first “Countdown to Christmas” aired in 2010, while Lifetime’s “It’s a Wonderful Lifetime” package included six or seven original movie debuts in 2012.

Today, the two brands jockey for the best holiday movie numbers. Hallmark released 38 original holiday movies in 2018 and will premiere 40 this year across its cable channels. Lifetime’s not far behind with 30. This season, as of Dec. 2, 58 million have watched Hallmark’s holiday content, while 68.8 million have watched “It’s a Wonderful Lifetime” as of Dec. 8. (Numbers were provided by the networks via Nielsen.)

By the end of this month, both networks expect to exceed last year’s viewer counts: 85 million for Hallmark, and 74 million for Lifetime. In addition to weekly Saturday and Sunday original-movie premieres starring the likes of Dolly Parton and Kristin Chenoweth, Hallmark’s broadcasting its charity work with Project Christmas Joy, a special about rebuilding tornado-ravaged towns in Alabama. Meanwhile, for the first year ever, Lifetime is leaning all the way in. “We decided to go 24 hours a day holiday movies,” says Hooper.

Both channels kicked off this year’s holiday season on Oct. 25, and more than 20 million have signed up on Hallmark’s Movie Checklist app to get alerts when new holiday movies debut.

“Without question, the sheer quantity of content that [Hallmark] brings out is admirable,” says UPtv’s general manager Amy Winter. As of Dec. 8, 12.7 million had watched UPtv’s holiday movies. The network will premiere 10 this season.

Both UPtv and Lifetime executives acknowledge Hallmark’s influence on their networks’ holiday productions. Winter says she looks for scripts with “a little bit more meat to them” than a Hallmark movie might have, something that “winks” at the audience—though A Christmas Movie Christmas offers more of a starry-eyed grin than a wink.

Kim Fields and Adrian Holmes in Lifetime’s “You Light Up My Christmas,” which premiered Dec. 1.
Courtesy of Lifetime

There is one notable difference between the networks. “[We’re] more dedicated to making sure our movies reflect the world that we live in,” Lifetime’s Hooper says—code for a level of diversity and inclusion that’s comparatively lacking across Hallmark’s holiday originals. More than half of Lifetime’s 2019 holiday movies feature a lead actor of color, and people of color have played significant roles in Lifetime holiday movies going back years. This year, Lifetime’s debuts also include four LGBTQ relationships and one “gay kiss.” (Meanwhile, the Hallmark channel just got in hot water for pulling an advertisement featuring two brides kissing. Because of the backlash, the channel reinstated the ad.)

Across 30 movies—and in 2019—four LGBTQ relationships isn’t something to brag about. But in the made-for-TV holiday movie tradition, it’s notable. When asked if Hallmark was making an effort to cast more diverse actors, Michelle Vicary, EVP of programming and network publicity at Crown Media, which runs Hallmark’s cable channels, said, “I think the entertainment industry in general has to do a lot of work to make up for a lack of diversity.” She pointed to the handful of black stars in Hallmark’s holiday films like Patti LaBelle, Tia Mowry-Hardrict, Tamera Mowry-Housley, and Brooks Darnell (Mowry-Hardrict also stars in Lifetime’s A Very Vintage Christmas).

“Holiday movie” also usually translates to “Christmas movie.” “This year, we have two [movies] that incorporate the Hanukkah tradition,” says Vicary, while UPtv has yet to make one. Most of Lifetime’s 2019 movies have “Christmas” in the title, but Mistletoe and Menorahs debuted Dec. 7.

Will Netflix leave cable traditions in the dust?

Netflix breaks the holiday movie mold by being, well, Netflix. While Hallmark, Lifetime, and UPtv share a primary demographic—women ages 25 to 54—Netflix, though it doesn’t report demographic or viewership numbers, programs for people of all ages in more than 190 countries, according to the company’s website.

“I remember seeing A Christmas Prince launch on Netflix [in 2017] and people freaking out about what is this space? What is this movie?” says Hooper. Cable networks know that as a streaming service, Netflix isn’t beholden to the same rules as they are. With a budget expected to reach $17.8 billion in 2020, Netflix also has lots of room to experiment.

Hallmark’s Vicary says she doesn’t consider Netflix competition. “I think they have a different audience, and I think that they don’t necessarily try and create the same experience we do,” she says. (Besides its owned and operated platforms, Hallmark offers its content on streaming services like Sling and AT&T Now, while Lifetime puts some of its movies on Netflix.) Meanwhile, UPtv’s Winter sees Netflix as still in a “testing” phase, figuring out its holiday programming strategy.

The streamer has largely stuck with a few cookie-cutter Christmas flicks each season, and making sequels. A Christmas Prince was followed up by The Royal Wedding in 2018 and The Royal Baby in 2019. The Knight Before Christmas, starring Hudgens, ends with room for a 2020 sequel.

There’s a chance Netflix could help direct under-25 audiences to the made-for-TV holiday movie popularized by cable networks. “I welcome Netflix into this space,” says Hooper. “It’s put these movies more into the zeitgeist. People are talking about them more, which is only benefiting Lifetime.”

Thanks to a generation less apt to tolerate misogynistic tropes like damsels in distress, theatrical-release romantic comedies have fallen more or less out of favor. This leaves a new void that the predictably romantic made-for-TV holiday flick can jump right into, Hooper suggests.

“I think people do want those movies,” she says. “I also think these movies are escapism, and given everything happening in the world right now, I think that’s also a reason why these movies continue to do better.”

—Whistleblower cinema is back in a big way
—The Black Christmas remake “is about taking power back,” the director says
—How some artists are building their careers through Spotify playlists
—As 2019 draws to a close, does the movie star still have a pulse?
—Why 1969 is “never going to die”—even as its 50th anniversary ends
Follow Fortune on Flipboard to stay up-to-date on the latest news and analysis.