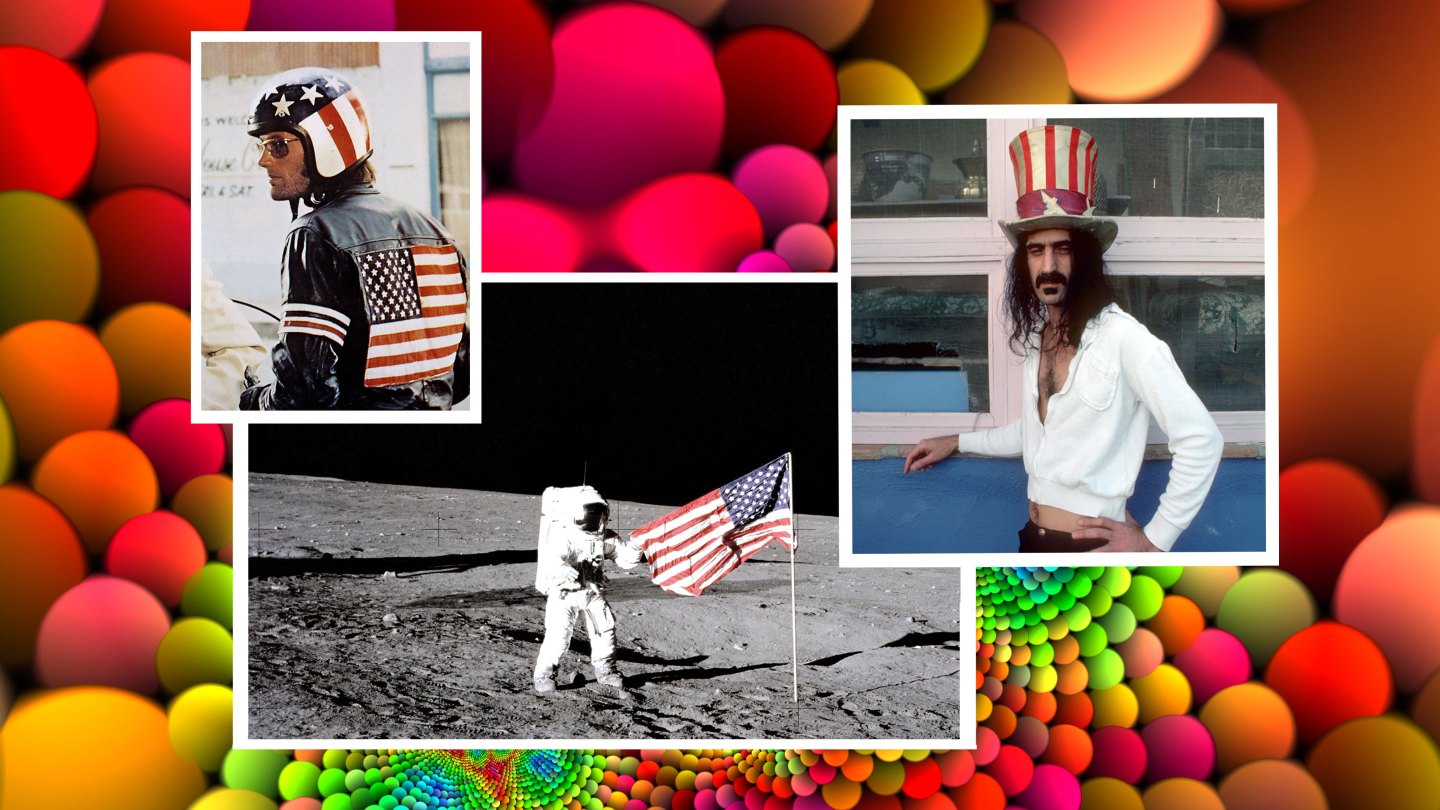 It’s 2019, and Frank Zappa is shredding on “Peaches en Regalia,” from his 1969 album Hot Rats. He hadn’t played the song live since 1988, five years before his death. But today, he’s a hologram among his real-life collaborators—and Hot Rats is about to be a boxed set.

That hologram tour, “The Bizarre World of Frank Zappa,” ran last spring, and the 50th anniversary edition of Hot Rats, which captures every composition recorded during its sessions, will be out soon (Dec. 20). The release marks the end of a lucrative year for back catalogs; among other rock classics, the Beatles’ Abbey Road, the Rolling Stones’ Let It Bleed, and the Kinks’ Arthur (Or the Decline and Fall of the British Empire) were rereleased in 2019. But the 1969 business is, in many ways, just getting started—from music labels to TV licensees to auction houses.

Aside from 1914—the year Gavrilo Princip fired a shot that triggered World War I—1969 could be considered the most important year of the 20th century. From Apollo 11 to the first stirrings of the Internet, from Sesame Street to Scooby-Doo, its events coded the DNA of the modern world. And 1969 content is still evergreen—astonishingly, Capitol/UMe’s Abbey Road: Super Deluxe Edition sent a 50-year-old album to No. 3 on the Billboard Top 200.

“It’s a testament to the public’s unwaning interest in and love for the band,” Bruce Resnikoff, the president and CEO of UMe, tells Fortune. “It’s a fundamental part of our business to ensure that all of our artists and their catalogs are available however music fans consume their music.”

As 1969’s golden anniversary fades into the sunset, many industries are clamoring to stake claims on its 55th, 60th, and 65th anniversaries. “We’re selling people back their memories a little bit,” says Michael Kachko, the SVP of catalog at BMG. “In 2029, it’ll be another great reason to look back. Every 10th anniversary—every fifth, even.”

“They have to think about that 10 years out, bare minimum,” says Clayton Durant, the founder of CAD Management, a boutique music management company and consulting firm. (Resnikoff says that UMe had been plotting this year’s anniversary for 25 years.)

Durant says that modern listening habits are a major driver: “The 1969 business is booming right now because of streaming, which has opened up the back catalog business.”

He’s talking about Woodstock—Back to the Garden: The Definitive 50th Anniversary Archive, Rhino’s 38-disc boxed set that contains almost every note played at the festival, restored to its historical sequence. The label released only 1,969 copies of the box with a whopping $800 price tag. It was a gamble, but Rhino sold every copy—and Durant says they’re playing the long game.

“They just proved that Woodstock can sell massive amounts of high-end merchandise,” he says. “And people are going to hyper-stream a lot of the music that is on the vinyl set. They’re able to make money from a lot of different places that aren’t necessarily the records themselves.”

Mara Kuge, the president and founder of Superior Music Publishing, says this is because we’re still living in the musical landscape that 1969 created. “This 50-year span is interesting as far as pop culture because we’re dealing with the rock era. We entered the rock era, and we stayed there,” she says. “There isn’t that generational divide from when rock started out. Now, all generations listen to rock ‘n’ roll.”

The sign for the International Hotel and Casino, advertising a performance by Elvis Presley, in Las Vegas, August 1969.
Frank Edwards—Fotos International/Getty Images

Legacy Recordings kept this in mind while marketing Elvis Presley: Live 1969, an 11-disc boxed set capturing the singer’s comeback shows at Las Vegas’s International Hotel. While the King was struggling to regain commercial momentum in 1969, it was an underrated year for him, as he was still a dynamic, charismatic performer—far from the “fat Elvis” of the last 18 months of his life.

John Jackson, the head of A&R at Legacy, says that Live 1969 wasn’t only meant to move units, but to coax people to stream more Elvis.

“It’s really about how you use this release to drive the whole idea of Elvis,” Jackson explains. “The demographics of people who are streaming Elvis are way below that 35-year-old mark, which is key for getting native digital people into overall Elvis fandom. We’re trying to get those people to stream more Elvis and become more familiar with his career.”

Is there actually a single person in the Western world unfamiliar with Elvis? “You can’t take anything for granted anymore,” Jackson says. “Spotify has ‘oldies’ playlists of music from 2005. Music from [1969] is starting to fade into the background of culture and society’s consciousness. You have to do things to get this stuff back into people’s heads.”

That’s what spurred some of the bonus content on Abbey Road: Super Deluxe Edition. For that release, UMe leveraged the Spotify Enhanced Album Experience, an app feature that intersperses its playlists with video content; Resnikoff says users’ age demographic plummeted from 38 to 27 in 2018, when they launched an Enhanced Album Playlist for the Super Deluxe Edition of The Beatles (or “The White Album”).

“We will create short videos that move quickly; we’ll create video animations of stories that give context to the time period; we’ll engage platforms like Instagram to ensure we are going where the audience is,” he says.

TV and film audiences are ripe for rediscovery, too—on the children’s-show front, both Sesame Street and Scooby-Doo debuted that year. Sesame Street aired a 50th anniversary PBS special; a representative from the show declined to comment for this article. Scooby-Doo rang in its anniversary with the Blu-ray set Scooby-Doo, Where Are You!: The Complete Series, packaged in a cardboard haunted house with collectibles.

Fifty years later, Scooby-Doo is still relevant to our era, a Warner Bros. Home Entertainment spokesperson who declined to be named says. “Up to the present day, there have been continued new productions built around the characters,” the spokesperson notes. “The characters continue to resonate with audiences of all ages.” (Warner Bros. cites a target demographic of collectors ages 35 to 54.)

Meanwhile, at a live auction on Dec. 16, Julien’s Auctions will offer a replica of the “Captain America” motorcycle that Dennis Hopper used in the publicity for the 1969 classic Easy Rider. (When the filmmakers lost access to the bike, they re-created it for the film.) Despite not being shown on-screen, the chopper, it’s estimated, will sell for $80,000 to $100,000.

And in past years, Julien’s Auctions has reliably sold Woodstock artifacts, like Keith Moon of The Who’s bass drumhead and the Fuzz Face distortion pedal Jimi Hendrix played through. “Obviously, Woodstock wasn’t a real organized event,” says Darren Julien, the auction house’s president and founder. “A lot of people didn’t save things thinking that they were going to be worth as much as what they are today.”

And let’s not forget the Apollo 11 moonwalk

To collectors, Apollo 11 is 1969’s golden goose; precious few items from the first moon landing are still out there. Bobby Livingston, the executive vice president of public relations at RR Auction, says that auction houses rely on small mementos, like flown flags and stray checklists, that “aren’t for museums” but still command six figures.

“Since the days of Lindbergh and Earhart, pilots have kept souvenirs of their travels,” he says. “We’ve been selling those things that the astronauts took to space with them.”

Neil Armstrong left the first human footprint on the surface of the moon, July 1969.
NASA/Newsmakers—Getty Images

In 2017, RR Auction sold a solid-gold replica of the lunar module that Cartier presented to Buzz Aldrin for $149,841, a rescue arrow pointing out the command module’s escape hatch for $147,572, and a flag taken to the moon and signed by Neil Armstrong, Buzz Aldrin, and Michael Collins for $120,693.

Armstrong and Aldrin walked on the moon’s surface for only two and a half hours—leaving a scarcity of items, which leads to ever higher prices. “People like me, we watched men walk on the moon,” Livingston says. “I saw it with my own two eyes on television among my classmates. The people who were inspired by that went on to create the Internet.”

In another auction that same year, Sotheby’s multiplied RR Auction’s highest Apollo 11 price by 12. A small lunar sample bag, used by Neil Armstrong and with moondust still on it, fetched $1.8 million after a tug-of-war with NASA and federal court. Despite this astronomical price, Sotheby’s was hoping to get $3 million or $4 million, and the sale of the bag, which had been stolen, remains controversial.

In 2019, we can arguably thank NASA’s innovations for most of our modern conveniences—personal computers, mobile phones, GPS. Given that roughly a dozen countries have little to no Internet access, Durant says that impending global connectivity will bring innumerable new 1969 consumers—Elvis fans, Beatles fans, Hendrix fans, fans of Woodstock, as well as those of NASA and Sesame Street.

“As 5G comes into play, the connectivity of the world is going to increase tenfold—and these legacy acts haven’t even hit international markets yet,” he says. “They’ve only hit the cusp of where they could be because of the scale of digital streaming.

“The 1969 business is never going to die,” Durant declares.

Soon, it will never again be the 50th anniversary of something that happened in the 1960s. But the music, art, and technology 1969 leaves behind all but ensures its own preservation. Kuge is quick to note that there was barely a 1919 business in 1969—no nostalgic ache for piano rolls, or the presidency of Woodrow Wilson. “Our generation wouldn’t have gone that far back with our retro,” she says with a laugh.

When it comes to 1969, we may have only scratched the surface of who can be repackaged, resold, and even resurrected as a hologram. In his 1989 memoir, The Real Frank Zappa Book, Zappa expressed his desire to start a hologram company called I.C.A. (or Inter-Continental Absurdities)—and prophesied that the 2010s would be gripped by “death by nostalgia.”

“In the next quarter century, the nostalgia cycles will be so close together that people will not be able to take a step without being nostalgic for the one they just took,” he wrote. “At that point, everything stops.”

But 50 years later, Zappa’s holographic likeness—and the rest of the 1969 business—shows no signs of stopping.

— Ghostbusters: Afterlife is leaning on the franchise’s nostalgic pull
—8 notable takeaways from the Golden Globe nominations
—Inside the Silicon Valley series finale with Mike Judge and Alec Berg
—The Mandalorian composer on crafting a new Star Wars soundscape
—The Aeronauts director on how he pulled off the high-flying adventure film
Follow Fortune on Flipboard to stay up-to-date on the latest news and analysis.