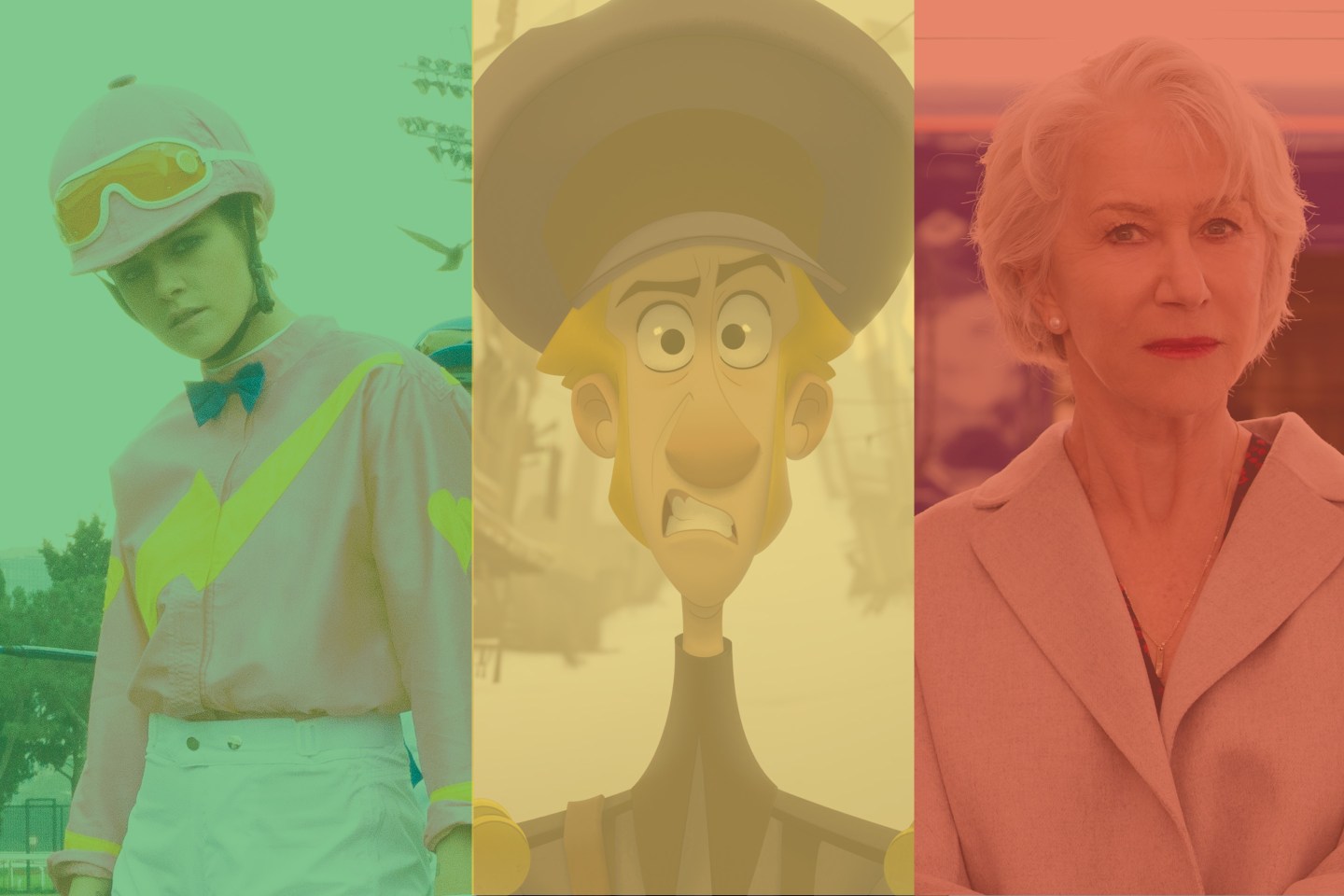 SEE IT: ‘Charlie’s Angels’ (In theaters)

Early on in Elizabeth Banks’s slick and exuberantly cartoonish reboot of the Charlie’s Angels franchise, the point is made that being a woman in the espionage business is a tactical advantage, because of how a male target’s misogyny can be weaponized against them.

Its crackerjack opening sequence finds the whip-smart, wise-cracking Sabina (Kristen Stewart) luxuriating on a balcony in Rio, listening to a smug embezzler explain why he’s so damn good at calling the shots. In a voluminous blonde wig and glittering minidress, she purrs back at him, explaining why she’s well-suited for her particular line of work while toying with a linen curtain that separates the pair from his bodyguards.

“Did you know it takes men an extra seven seconds to perceive a woman as a threat?” she asks, seductively looping the curtain around his arms and neck, making a show of it for the leery hired muscle nearby. “Isn’t that wild?” It takes about that long for her words to sink in, by which time it’s far, far too late for any of these fellas to avoid the beatdown that’s about to commence.

Charlie’s Angels pounces out of the long grass with a viper’s speed and a tiger’s strength. In this first scene, and across its remarkably agile 118-minute runtime, the movie sings with the propulsive energy of a future-is-female spy caper that’s been decades in the coming and can’t move fast enough now that it’s here. This is a leaner, more spartan (yet stylish) affair than either of McG’s turn-of-the-century confectionary items, its Angels lethal, its pacing relentless, and its feminism refreshingly a facet instead of the entire feature.

At its core are three perfectly cast stars. In a long-awaited return to blockbuster filmmaking that reaffirms her as one of the decade’s brightest stars, Stewart can’t help but steal the show; her Sabina is a marvelous creation indeed, a font of comic timing on top of being a nimble action hero and the film’s not-so-secret heart. Ella Balinska, as Jane, is the team’s born leader, hyper-proficient and sometimes resolutely professional without appearing icy. The actress plays her with an athleticism and broody charm that recalls Tom Cruise’s early work in Mission: Impossible, though Banks restrains the action operatics to a handful of standout sequences. And as the audience-surrogate Elena, a scientist taken under the Angels’ wing, Naomi Scott imbues a predictable arc with real feeling and humor.

It’s Banks, though, who’s balancing the most here. On top of directing, she plays handler Bosley—one of several, actually, with Charlie’s Angels taking a page of the Kingsman playbook to expand its spycraft globally, positing the character as more of a rank, like lieutenant. Tasked with introducing this franchise’s modish, candy-colored universe on screen as well as behind the camera, Banks tackles both roles with remarkable sangfroid. It’s a terrific match of creator to subject, enough so that you forgive the narrative’s occasional clunk and clatter; her Charlie’s Angels is a pulpy, triumphant vision of franchise filmmaking you immediately want more of.

Funny, how some of the best Netflix productions of late (The Irishman, Roma) makes one rage against the streaming-service model itself, crying out for a theatrical viewing experience.

Klaus was purportedly released in theaters last week, and its stunningly gorgeous animation makes one wish it had been marketed and released more widely in that format. A lovingly crafted return to hand-drawn, two-dimensional animation, it feels like something Disney might have made in its Renaissance period, before mega-corporate machinations deemed such a painstaking approach impractical and thus obsolete.

Credit director Sergio Pablos, who worked on such Disney classics as Hercules and Tarzan, with keeping the magic alive. Commend Netflix, too, for giving him the platform through which to bring Klaus to an audience in sore need of such hopeful individuality from the medium. Setting up his own animation studio in Spain, Pablos set out to discover how the hand-drawn approach might have evolved had computer animation not succeeded it. The results are nothing short of wondrous, the rich textures and evocative colors of his Klaus harboring an emotional resonance most CG-animated creations couldn’t hope to replicate. Some of the images Klaus creates—bells chiming as winter wind gusts around an icebound forest, a landscape materializing out of fog, aurora borealis illuminating a sleigh in the night—cast a particularly enchanting spell.

Pablos’s instincts as a director aren’t quite as sound as those he brings to the visual look and feel of Klaus. It’s such a spellbinding, engaging story to watch that the modern needle-drops (The Heavy’s “How You Like Me Now?” and a Zara Larsson song called “Invisible” that was written for the film) feel like an intrusion, as do some of the recognizable voices in the cast. Jason Schwartzman heads a roster that includes J.K. Simmons, Rashida Jones, and Joan Cusack; the Rushmore actor stars as a postman stationed on a depressed island in the Arctic Circle, where feuding locals have little need for communication, until a reclusive carpenter (Simmons) begins delivering his hand-crafted curios to the local children.

The Christmas origin story elements of Klaus, though familiar, are also heartfelt and hopeful, enough to delight any children in the audience without alienating parents in tow. And to see a story as age-old as this made new again through the sheer beauty and diligence of its telling—that does feel like a kind of small miracle most welcome at this time of the year.

SKIP IT: ‘The Good Liar’ (In theaters)

Dame Helen Mirren and Sir Ian McKellen share the screen for what’s somehow the first time in this stately-till-it’s-silly cat-and-mouse thriller. And the prospect of watching two British cinema titans face off after a shared 150 years of work on the stage and screen is, for a time, the only hook Bill Condon’s tale of long cons and longer memories needs to command your attention.

After all, these two rarely get to cut loose like they do here, playing Betty (Mirren) and Roy (McKellen), two lonely older people who sit down for a London pub lunch after getting matched up via a dating service. Though both cop to some light embellishments in their profiles, the pair soon strike up a close (and entirely platonic) companionship, rooted in their shared nostalgia for a world they once knew but that’s since passed out of existence. Rather quickly, they find themselves living under the same roof. Only Roy’s concealing more than just a smoking habit. He’s a career scoundrel, a profoundly nasty piece of work who most relishes deceiving his quarry, playing the harmless octogenarian in decline right up until he robs them blind. And he’s got his eye on Betty’s sizable retirement fund.

These are two actors skilled enough that even their characters’ curious lack of chemistry feels like a stratagem—don’t cut yourself on the daggers they glare everywhere but at one other—and with a title like The Good Liar, it’s no real surprise to report that neither Betty nor Roy are what they first appear to be. But when the twists do come in this adaptation of Nicholas Searle’s 2016 novel (and boy, do they come), scribe Jeffrey Hatcher writes them with more nerve and absurdity than Bill Condon’s snoozy direction is prepared to handle.

“It’s like being suffocated in beige,” sneers Roy at one point. He’s discussing his new, suburban lodgings with Betty, but the character might as well be talking about Condon’s miscalculated decision to keep The Good Liar humming blandly along even after his plot thoroughly departs the rails.

In his superb Gods and Monsters and very fine Mr. Holmes (also written by Hatcher), Condon drew two impeccable performances out of McKellen, and he’s excellent here too, all that patrician bearing just barely concealing the venom in Roy’s eyes. Mirren’s great too, bringing a sense of grace and gravitas to Betty that grows progressively more entertaining to watch as her character’s motivations are revealed to be more unusually specific, and completely ludicrous, than previously expected. But The Good Liar is a cozy mystery in want of Hitchcockian flair. When it morphs into a very different, more melodramatic affair during its flashback-heavy third act, there’s no suspense generated by all the gotcha-isms, just a weary shrug and the faint whiff of swindle. To properly satisfy, a twister’s jigsaw pieces must be assembled with some care and precision. Though The Good Liar postures like a higher breed of thriller, that’s ultimately its most successful misdirect: this one’s as ready-for-Lifetime as they get.

—The Man in the High Castle team on what to expect in its final season
—Wrongful Conviction podcast visits Rodney Reed on death row
—A new documentary on “The Preppy Murder” examines victim blaming and privilege
—Inside the Oscars’ self-inflicted Best Foreign-Language Film headache
—The non-Mandalorian Disney+ series do little to distract from nostalgia
Follow Fortune on Flipboard to stay up-to-date on the latest news and analysis.