Minus ‘The Mandalorian,’ Disney+ Just Lip-Syncs Its Own Praises 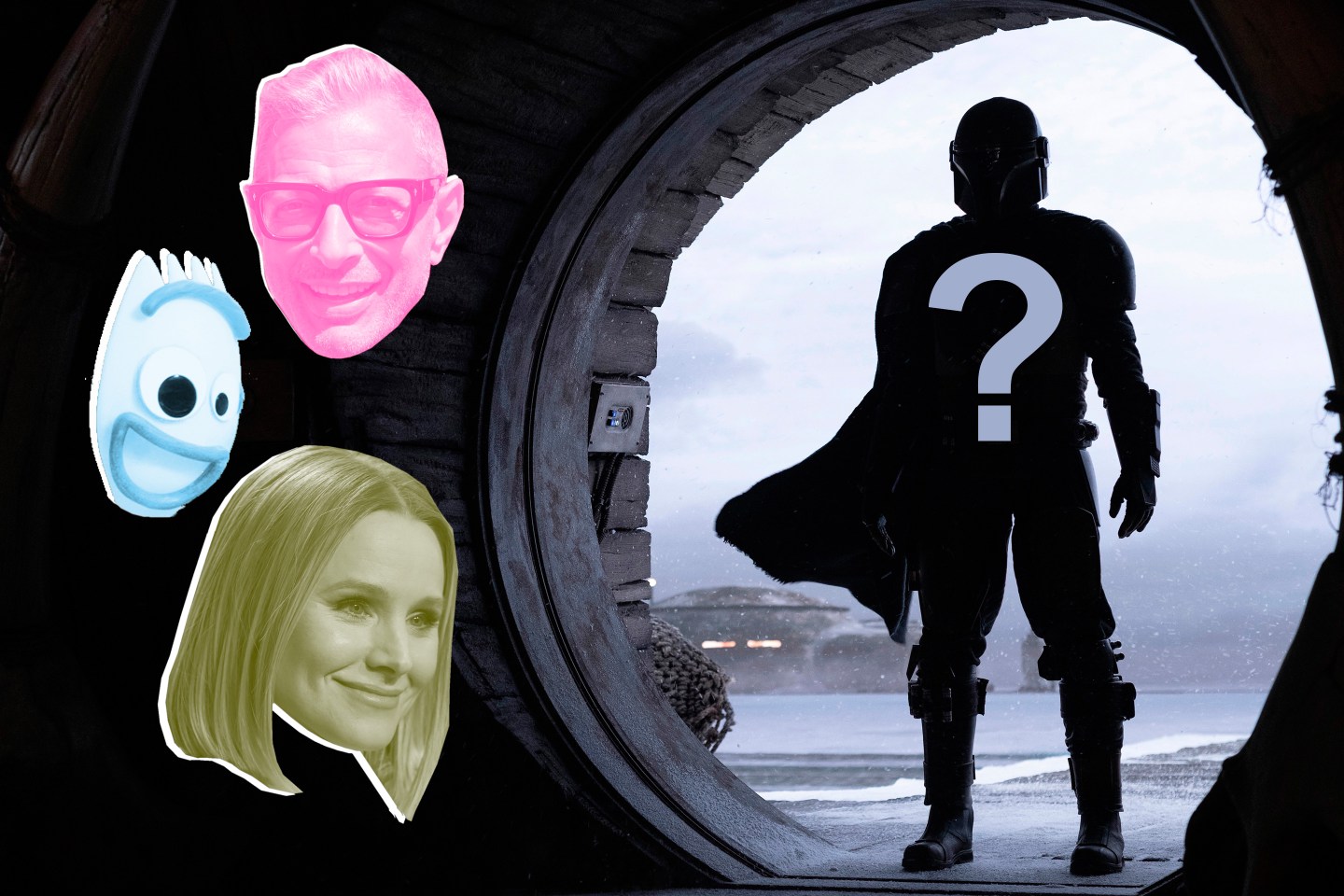 Outside of "The Mandalorian," which was not made available to press ahead of Disney+'s Nov. 12 launch, much of the streamer's content seems to be caught up in Disney nostalgia.
Images Courtesy of Disney+

In evaluating the ever more crowded streaming landscape, there’s a flawed yet understandable temptation to frame new arrivals as both market competitors and bitter ideological rivals. It’s right there in the cultural shorthand: streaming wars—even if the truth’s more complicated.

You see Disney+ and Apple TV+ launching in not only the same quarter but 11 days apart, both locked and loaded with original programming, and it’s difficult not to envision of a clash of industry titans.

But Apple and Disney are playing drastically different games with their bids at streaming-service dominance. No element of the platforms’ rollouts makes that more abundantly clear than the original series with which both are launching, one eyeing an uncertain future and the other steeped in nostalgia for a storied past.

Disney+, when it launches Tuesday, will offer subscribers something Apple could never dream of matching: the keys to its magic kingdom. Housed on the service are Disney, Marvel, Lucasfilm, and Pixar libraries, as well as less obvious stockpiles of The Simpsons and National Geographic programming. It’s a truly eye-popping amount of content, much of it culturally beloved, and perhaps because of that Disney+ was always going to make the bigger splash with its back catalog.

But it’s telling all the same how small the ripples set off by Disney+’s originals really are, with the all-important exception of The Mandalorian (not made available to critics in advance). For archivists, the launch is sure to be a monumental occasion. For anyone other than substitute teachers looking for a way out of their lesson plan, the non-Mandalorian offerings on Disney+ will barely register.

From a content perspective, actually, Apple and Disney are more like ships passing in the night than the best of enemies. Without a back catalog of its own, Apple believed its (unfortunately lackluster) imitation of an HBO slate would be enough to keep customers comfortable inside its product ecosystem. Flagship drama The Morning Show, dystopian See, teen-targeted Dickinson, alt-history For All Mankind, even nature doc The Elephant Queen were each aimed at a different demographic within the company’s vast customer base. And had Apple’s series delivered the goods, their range would have made a powerful point: we’ve got something for everyone, and everyone’s with us.

At least the first half of that is already true for Disney+ (even if it remains to be seen how many people sign up during the premiere period). But the streamer, outside of touting its myriad offerings at every turn, also betrays precious little understanding of how to move the Disney brand forward, or even amplify its pre-existing strengths. The originals previewed—again, with that gaping question mark of The Mandalorian—amount to nothing more than pretty, empty baubles, some of them barely qualifying as shows in and of themselves.

Sure, the live-action Lady and the Tramp remake is plenty endearing; hell, it’s borderline-unimpeachable on ideological grounds. But the film (directed by Charlie Bean) is also a trifle, updating the original’s story with digitally realistic pups and faint traces of charm and vigor. There’s little to howl home about.

The same can be said of Forky Asks A Question, a shameless, somewhat ghoulish brand extension that gives the Toy Story 4 character his own educational segment. Watching Forky (again voiced by Tony Hale) ponder the meaning of friendship and money will be marginally amusing for some, but there’s no reason to expect the series (10 episodes, each 3 minutes long) to feel like anything more than a glorified commercial.

At least Forky doesn’t stick around long enough to sour. High School Musical: The Musical: The Series is literally the same old song and dance, trading on viewers’ nostalgia for the Disney Channel movie series even as it feints at sending them up. By setting the series in a world where the HSM movies not only exist but are well-regarded enough to inspire a high-school play version (hence the next-level terrible title), the Disney+ series winks at the franchise. If only it could make more than that one expression.

A central but unevenly applied mockumentary conceit distracts greatly from the series’ stronger elements, including the gamely doe-eyed young cast and a few decent musical numbers (though the actors’ noticeable lip-syncing of their vocals makes for the kind of wince-inducing throwback most could do without). On the whole, the show’s a hollow retread in search of a heart; there’s nothing here to rival the fizzy, feel-good charm of the High School Musical films, and this show’s attempts to modernize the humor—while keeping it resolutely tame, of course—fail spectacularly. It’s perhaps the strangest Disney+ series in terms of the company plundering its own resources; in attempting to riff on High School Musical, the new show only makes you miss it. (There’s an argument to be made that’s the point—it doesn’t take an East High valedictorian to guess what Disney+ will link up as the “related title.”)

Marvel’s Hero Project could have been cooked up in a laboratory by Disney’s PR team, though that doesn’t make it any less touching. A docuseries that gives kids who’ve overcome adversity of some sort a chance to be immortalized in their own Marvel comic books, it’s heartwarming and well-intentioned, a neat trick of corporate philanthropy trickling down to a few deserving recipients.

The Imagineering Story is stronger, a six-part documentary that explores the Disney theme parks and works hardest to lionize The Walt Disney Company as myth. Making no claims of impartiality (it’s directed by Leslie Iwerks, granddaughter of animation-tech groundbreaker Ub Iwerks), it’s out to salute the men and women whose work designing Disney’s theme parks has resulted in some of the world’s foremost family attractions. If there’s a weakness, it’s that the series so condenses dense, plentiful history into digestible hour-long episodes that it appears to be simply skimming the surface of the Imagineering group’s story.

“Skimming the surface” could really be the mantra of all these Disney+ series. Its two celebrity-fronted ventures, The World According to Jeff Goldblum and Encore! with Kristen Bell, are two deeply amusing concepts that turn out to be far less enjoyable when stretched out to series’ length.

Goldblum’s series capitalizes on the Jurassic Park actor’s amiably, infinitely memeable charm, as he spends half-hour episodes looking at the history and global prominence of various consumer items, from sneakers to denim. It’s a wonky premise that makes for a handful of entertaining moments (such as when Goldblum praises a pair of “whimsical pants” at a flea market or gets nicknamed “The Fly” during a game of pick-up basketball), but hanging on the actor’s every word is a strategy that will pay off most for those already enamored of the guy.

Bell’s hourlong reality series, Encore!, is at least a little more unorthodox, with The Good Place actress catching up with performers in high school plays decades later to issue them the unusual, likely traumatic challenge of reprising those childhood roles. It’s staged and executed as predictably as you’d imagine, often resembling something from Bravo’s interminable stable, but the series is getting at something earnest about the cathartic power of live performance, and that’s at least a more human aim than some of the other Disney+ programming.

Disney declined to make episodes of The Mandalorian available to critics ahead of the service’s launch, citing its concerns that spoilers might leak online ahead of release. Be that as it may, the Jon Favreau-created series, set in the Star Wars universe, is a marquee attraction so blindingly bright it blots out all the other Disney+ originals, especially ones as inessential as those mentioned above. Evaluating the service’s freshman offerings without The Mandalorian feels something akin to leaving a concert after the openers.

Aside from capitalizing on the pop-cultural clout of its second most-lucrative franchise (the Marvel Disney+ series, led by The Falcon and the Winter Soldier, aren’t expected until next August), The Mandalorian promises to be Lucasfilm’s longest-form extension of the Star Wars universe to date. Set five years after Return of the Jedi and centered on a bounty hunter (Pedro Pascal) living in the outer reaches of the galaxy, it’s billed as a Space Western and has the potential (not to mention the $120 million budget) to make a compelling case for the Star Wars franchise to explore other genres beyond, well, soap opera.

Spoilers for next month’s cinema-bound Episode IX: The Rise of Skywalker seem unlikely—though, given the apparent return of one key Return of the Jedi baddie hinted at in the film’s trailer, such things certainly aren’t outside the realm of possibility.

Beyond being the buzziest Disney+ series by several light years, The Mandalorian is also the only original really capable of moving subscriptions in isolation. (Save the few substitute teachers and young parents who’ll look to Forky Asks A Question for deliverance, only to discover with horror all 10 episodes combined will only buy them a half-hour.)

By leaving The Mandalorian‘s quality a question mark until launch, Disney+ has removed much of any meaningful discussion there is to have around its new series. Of course, that might be how Disney wants it. Unlike Apple, the company’s back catalog is loaded so high that it can afford to take far fewer swings in terms of original programming, knowing that the majority of its subscribers will sign up for familiar comforts more than new and exciting entertainment. For many, Disney provided an entire childhood. It’s just a pity that the bulk of its streaming service’s new offerings amount to little more than soulless brand polishing. The streamer is content to revel in nostalgic flights of fancy, lip-syncing its own praises—one just wishes it would go the trouble of constructing anything at all with just a glimmer of Disney magic.

—The Kingmaker tackles the truths and “horrors” surrounding Imelda Marcos
—Honey Boy director Alma Har’el carves out space for female filmmakers
—Oscars 2020: Welcome to the wildest screenplay competition ever
—Inside Fox’s strategy as a newly independent network
—HBO’s The Apollo chronicles the theater’s struggles and triumphs
Follow Fortune on Flipboard to stay up-to-date on the latest news and analysis.