‘The Kingmaker’ Tackles the Truths and ‘Horrors’ Surrounding Imelda Marcos 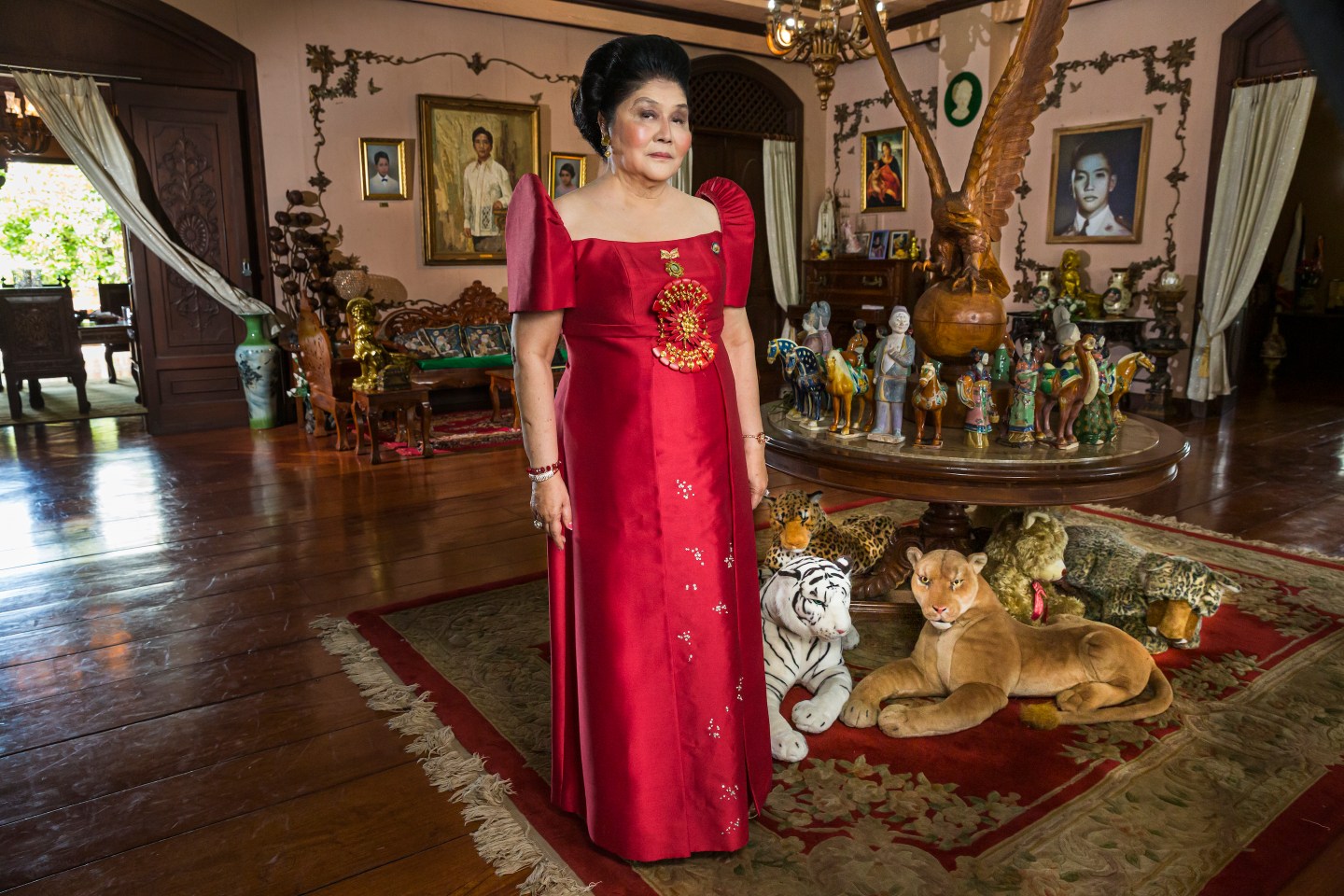 In the documentary The Kingmaker, former Philippine first lady Imelda Marcos floats around her lavish courtyard, browsing through photos of herself with world leaders—from Richard Nixon to Chairman Mao. “Here is Russia,” she announces, daintily picking up a frame—and sending another to shatter on the concrete. Imelda doesn’t offer to clean it up; she doesn’t even flinch. An aide silently scoops the shards.

“That scene is a really important character moment,” the film’s director, Lauren Greenfield, tells Fortune. “She’s telling her story about being friends with and courting all of the dictators of the 20th century, so she doesn’t pay attention to the wreckage around her and the fact that other people have to deal with it.”

That wreckage dates back to Marcos’s marriage to dictator Ferdinand Marcos and her time as first lady of the Philippines from 1965 to 1986. According to Amnesty International, 70,000 people were incarcerated, 34,000 were tortured, and more than 3,200 were killed under the regime. Ferdinand silenced the media and ruled with martial law. The couple lived opulently on the backs of their people before they were exiled in 1986—and Ferdinand died in 1989.

In The Kingmaker, out Friday, Greenfield tells their story unflinchingly, allowing survivors of the Marcoses’ human rights abuses to speak their piece.

The Venice Beach-based documentarian has staked her claim on films about wealth and consumerism, including 2012’s The Queen of Versailles, about billionaires David and Jackie Siegel being undone by the 2008 financial crisis, and 2018’s Generation Wealth, a more general work about the culture and pathology of modern materialism.

With The Kingmaker, Greenfield exposes the brutality, moral travesties, and flat-out weirdness of the Marcos couple: from driving indigenous people off an island to whimsically build an African animal park that fell into disrepair and inbreeding, to rolling around in swindled billions of dollars from their electorate—much of which is still unrecovered.

Read on for our interview with Greenfield about undertaking her most incendiary, humanistic documentary yet.

What compelled you to tell the story of the Marcos regime?

For the last 25 years, I’ve been looking at wealth, consumerism, and materialism in different ways. Imelda Marcos has always been an iconic reference point, even when I was in Jackie Siegel’s shoe closet [for The Queen of Versailles]. But I never thought I’d have the opportunity to meet her.

I read an article in Bloomberg by William Mellor in which I found out Imelda was back in Manila and had become a congresswoman, which I found kind of unbelievable. The article focused on this animal island that she’d created that’s in the film, Calauit [Safari Park].

I was blown away by this ultimate extravagance—people talk about her shoes, but [she had] an island of indigenous people that got depopulated for a pet project where she brought in these animals from Africa. Cut to: They get kicked out of the country, and decades of inbreeding later, the animals were left to fend for themselves.

I thought it was a really compelling symbol of their recklessness and wanton power, and how an impulsive decision can lead to decades of damage among the people and the animals.

So, that was my entry point, and I thought it was going to be a historical story about the animals. But what happened was, the political narrative took over. When I started, it was before [their son Ferdinand] “Bongbong” [Marcos] had declared for vice president. No journalist thought he had a chance in hell.

I wasn’t that focused on it in the beginning, but as Bongbong started to gain momentum, I started to see this comeback of the Marcos family, which seemed so unbelievable given that they stole $5 to $10 billion from the country and were thrown out in 1986.

(L-R): Behind the scenes with Lauren Greenfield and Imelda Marcos from “The Kingmaker.”
Evergreen Pictures

Early on, Imelda breaks a glass picture frame and doesn’t even blink as someone cleans it up for her. Does she exist outside of social norms?

I see that scene as showing how unstoppable she is. That’s why I call her indomitable. I think that scene is a really important character moment. Not so much about social norms, although it’s interesting you say that.

I think about it more like she breaks things and she’s not even aware and lets other people clean up the mess. She doesn’t even acknowledge it. She’s telling her story about being friends with and courting all of the dictators of the 20th century, so she doesn’t pay attention to the wreckage around her and the fact that other people have to deal with it.

In the beginning, that was very representative of how she was with the animal island. She said there were no animals left, but she had never been back so she didn’t even know that. It doesn’t matter about the human rights abuses of martial law. She can just turn her gaze away from that and focus on what she wants to focus on.

I think the real surprise in the narrative, for me, was that the Filipinos started buying into it. Especially the younger electorate started believing the story she was telling.

How did Imelda strike you in person?

She’s a narcissist. I think she does believe her own story, but the self-serving, strategic story, too. I think that in the past, people have made the mistake of thinking she’s delusional, and she kind of puts that out there, but I think it’s very strategic. She says early on in the film, “People underestimate women, and sometimes that’s useful.” I think people have underestimated her, and that’s made her only the more powerful and successful.

But the thing about her character that was really captivating to me is that when you’re with her, she’s very charismatic; she’s kind, she’s generous. She wants to make sure you have food, she wants to give you a meal. She spends time with you. She tells stories; she’s an amazing storyteller.

So you’re kind of drawn in, and that’s why I tried to have that time with her at the beginning of the film and try to tell her backstory so that the audience can feel, in a way, what the Filipino people have felt and many still feel about looking up to her, but at the same time, not look away from the horrors of the regime.

In one scene, she says that “perception is real and truth is not.” Doesn’t that sum up the Marcos story?

The Marcos story and, in a way, our Trumpian era, too. She’s really brilliant about that. I think that is a kind of brilliant observation and something that propelled her success. She knows that if people perceive her as being this motherly, queenlike figure, it doesn’t matter what the truth was. They can say that martial law was the best years of Marcos.

That’s why I tried to show that she was an unreliable narrator, that she was showing untruths. Progressively, the audience becomes aware of that through the voices of incredible truth-tellers like the survivors of torture, [human rights activist] May [Rodriguez] and Andy Bautista, the former head of the commission [on Philippine elections] that was going after their ill-gotten wealth.

Last year, Ferdinand and Imelda’s daughter, Imee, told Filipinos to “move on” from horrific memories of the regime.

That’s the narrative that they’re pushing: “Let’s move on, we don’t need to dwell on the past.” At the end of the movie, Imelda says, “The past is the past; it’s no longer there.” Unfortunately, the millennials haven’t moved on, but a lot of them never knew about it. Like you see in the film, it wasn’t taught properly in schools.

We go into that school and the children are saying, “Martial law was great. Martial law was a time of prosperity, a time of discipline.” Because it wasn’t really taught, it’s a very vulnerable electorate to the fake news that’s being propagated on social media, which May says that the Marcoses are funding.

The subsequent government after the Marcoses did not make sure to inculcate to young people and to the schools what they called the “dark period,” the period of martial law, human rights abuses, the shutdown of democratic institutions, shutting down the press, shutting down Congress, having an over two-decade-long dictatorship.

They don’t remember that. And that was part of why I thought it was so important to include the stories of the survivors.

Imelda Marcos in Manila and Ilocos Norte in a still from “The Kingmaker.”
Lauren Greenfield

How could someone say that martial law was good?

I don’t think any rational person who studied the period could say it was a good thing. But there are parts of having a police state… like, there’s no crime! It was organized and disciplined on the street! Yeah, sometimes people say that.

Really, it’s about fake news and celebrity culture where the Marcoses had name recognition and were on the world stage for a moment, like Jack and Jackie Kennedy. It was a kind of Camelot that’s easy to romanticize now.

But the reality is, the economy collapsed under Marcoses. Subsequently, it really suffered from them stealing the $5 to $10 billion. So, ironically, there’s been this persistent poverty, which in the present day makes the electorate vulnerable to the appeal of a strongman who promises quick answers to their problems.

Was this a clue as to what world leaders would be like in 2019?

It feels very Trumpian: from the disinformation that impacts elections, to the idea of a strongman who doesn’t take shit from anybody, to [current Philippines president Rodrigo] Duterte seeming like he’s of the people even though he’s actually from an elite background, saying “Screw the system” and coming in on this platform of change, to the disregard for human rights.

Thirty thousand people have been killed in the so-called “drug war” since Duterte has held office, and when Trump and Duterte had a phone conversation, Trump congratulated him on his terrific work on the drug war.

Given the disinformation out there, The Kingmaker seems like the most complete telling of the Marcos story yet.

I wanted to look at how we got here. It’s a little bit of a history of the present. I think that when Duterte was elected, it was a very scary repetition of the past. Another dictator, another brutal regime. The threats to democracy, the threats to the media.

For me, the big picture is what former president [Benigno] “Noynoy” Aquino said when he quoted George Santayana: “If we don’t remember the past, we’re condemned to repeat it.”

That was the big picture for me: the danger of the strongman, of authoritarian regimes and political dynasty, and of the concentration of wealth and power in one family.

—Honey Boy director Alma Har’el carves out space for female filmmakers
—Oscars 2020: Welcome to the wildest screenplay competition ever
—Inside Fox’s strategy as a newly independent network
—HBO’s The Apollo chronicles the theater’s struggles and triumphs
—Will social media buzz help decide the Oscars?
Follow Fortune on Flipboard to stay up-to-date on the latest news and analysis.