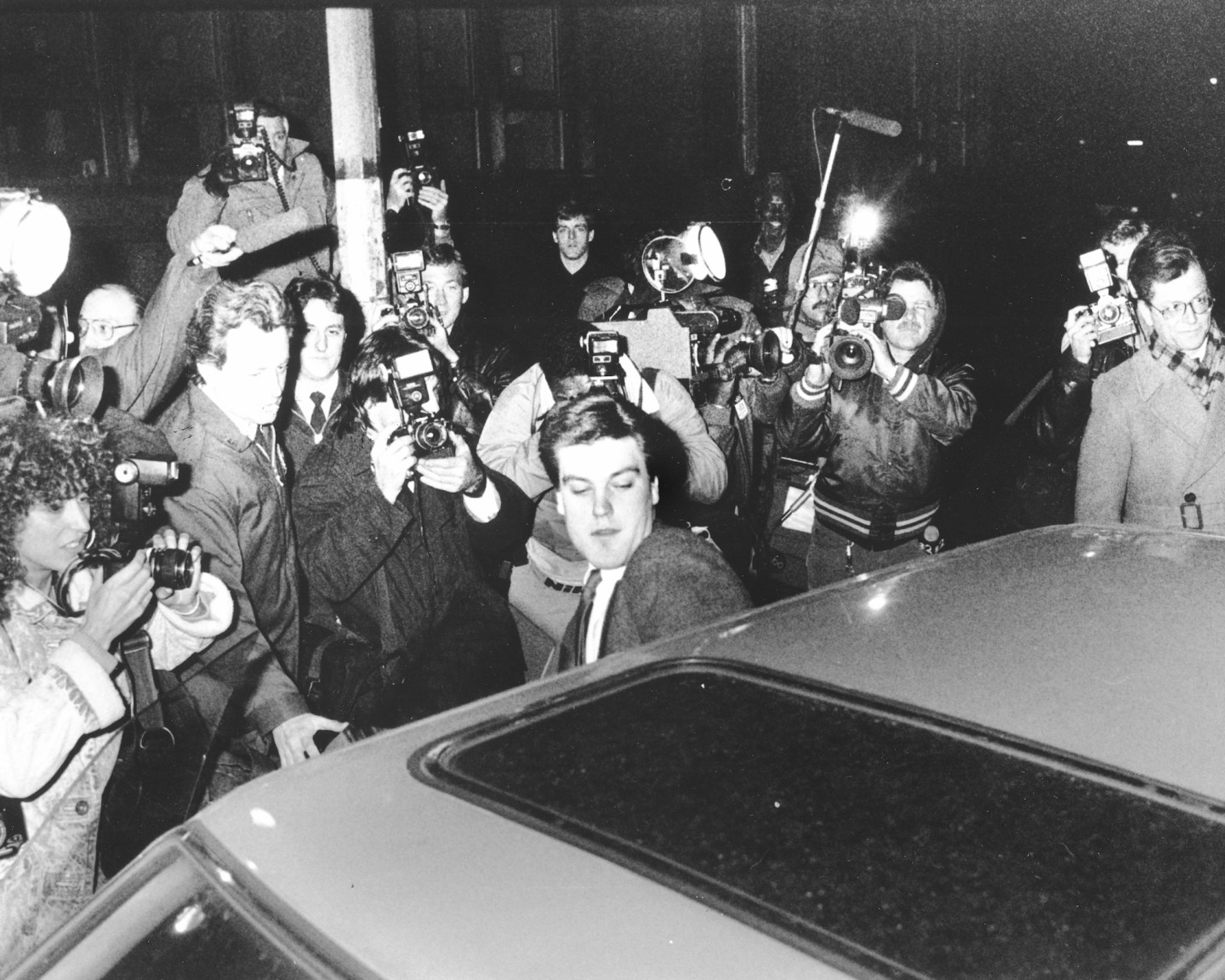 On Aug. 26, 1986, 18-year-old Jennifer Levin was strangled by Robert Chambers in Central Park, just behind the Metropolitan Museum of Art, after the acquaintances had left the Upper East Side bar Dorrian’s Red Hand. The case was a New York City media sensation, with the handsome Chambers being dubbed “the Preppy Killer” and tabloids running with his story, that the killing was in self-defense during rough sex that got out of hand. When it became clear that a jury would be deadlocked on the charge of murder, prosecutor Linda Fairstein and Chambers’s attorneys agreed to a plea deal of five to 15 years in prison for manslaughter.

The case is reexamined in a new five-part documentary, The Preppy Murder: Death in Central Park, which debuts Nov. 13 on AMC and SundanceTV. Directed by Annie Sundberg and Ricki Stern, the team behind Reversing Roe, Joan Rivers: A Piece of Work, In My Father’s House, and other lauded documentaries, it covers all aspects of the case, with a particular focus on Levin’s life and the victim-blaming narrative that emerged after her death.

“For many reasons, this case has echoes of some of what we’re seeing playing out now with Harvey Weinstein and Jeffrey Epstein, the narrative that’s always driven by the perpetrators,” says Sundberg. “There’s an issue of the power dynamics that really affected the cultural perceptions around this particular case that we wanted to explore and to, in many ways, lift Jennifer’s story up and to reveal the impact of the case on her family and her legacy.” (Chambers never responded to interview requests from the directors.)

“This was really one of the most highly publicized ‘blame the victim’ cases,” adds Stern, who knew Chambers in high school. “It was a narrative created by the defense attorney that there was rough sex perpetrated by Jennifer and that this is a self-defense case. It’s interesting to look at this in light of this Me Too moment with an understanding that blaming of women for their own death, hopefully, would be looked at in a different light today. One of the reasons he got off was because she was looked at as this loose girl who was pursuing sex. We’re looking at this now with the question, ‘Could this have been his defense today?’”

The story that emerged, thanks to Chambers’s all-American looks and attorneys’ skillful manipulation of the press, was that he was a well-off Upper East Sider who went to the finest schools, caught up in a disastrous situation that involved sex and alcohol. A New York Magazine cover story showed Chambers, wearing a suit and looking solemn, with the headline “East Side Story,” painting it as a tragedy for all involved. The narrative in reality was much different—he wasn’t wealthy, got kicked out of several of the private schools he attended on financial-need scholarships, went to rehab in his teens for drug and alcohol use, and frequently stole from his peers. Still, the rough sex angle sold more papers.

The filmmakers see echoes of that tabloid “race to the bottom” in clickbait headlines now, though they want to believe things would be different. “Girls are still blamed for their actions, but there’s a greater opportunity now with social media to push back against that,” Stern says. “[Back then] you saw these fringe groups, whether it’s the Guardian Angels or a group of women activists, acknowledge there’s something wrong in this defense and do their best to raise this concern, but it’s really a murmur in the crowd. You even hear it from the journalists who were there—they knew this was blaming Jennifer for her own death, but there wasn’t as great an opportunity to voice a more collective disagreement of that.”

As Sundberg wonders, “Are we in a culture that’s giving greater voice and credence to women’s claims where they’ve been silenced or abused? Are social media outlets are helping to reset that balance, or if some of the pressures are still just as heavy? I don’t know.”

The social media aspect is even more interesting considering The Preppy Murder features interviews with Linda Fairstein, who faced plenty of online outrage over her role in wrongly convicting the Central Park Five, as seen in Ava Duvernay’s Netflix series When They See Us. Here, Fairstein is shown in a sympathetic light, leading the first sex-crimes unit and dealing with a stacked deck of sexism, the media, and a justice system that leaned heavily in favor of Chambers. DNA evidence that showed Levin was strangled with her denim jacket was suppressed, as was Chambers’s history of substance abuse and crime, while his attorneys were allowed to raise questions about Levin’s promiscuity.

“There was no need to address [the Central Park Five] with this storytelling. What we had to look at was, ‘What was her role in this case?’” says Stern. “She was only the second woman to ever try a murder case in New York. Jennifer Levin’s family felt she had done the best job that anyone could. They felt very protected by her and that she could represent their daughter in the best way. We really just tried to stay focused on the work she did specifically in this case.” In terms of how viewers will react to seeing Fairstein in this way, Stern adds, “That’s going to be for the individual to experience it, and whether or not they can see the work she did on this case and take it for that value.”

They also stress that while there are parallels between the cases—Fairstein, a white female victim, Central Park—they are vastly different in terms of the media narrative, public fascination, and how Chambers was leniently punished.

“There are cases you can’t get enough of. People can’t get enough of O.J., can’t get enough of the Kennedy stuff [the killing of Martha Moxley and conviction of Kennedy cousin Michael Skakel],” says producer Robert Friedman, who’s currently working on Lifetime’s Surviving Jeffrey Epstein. “They share socio-economic similarities and, in some ways, the same ending. Chambers served 15 years for manslaughter, came out, and he’s serving another 19, until 2024, on drug charges.  There is a major endemic problem in the judicial system that can put someone in jail for doing what he did for five to 15 years and 19 for drugs. In telling these stories again, I hope we make some inroads on the system as well.”

Ultimately, the directors hope viewers will think harder about how stories are presented in mainstream and social media, and put more emphasis on remembering the victims and the devastating effects crimes have on their loved ones.

“I feel like the takeaway now is more about how we perceive our own biases, how we choose to lean into what we feel to be the right story. Why is that? What is it about that story that seems to be the comfortable narrative for us to live with?” Sundberg says. “Jennifer was killed by someone she trusted and the aftermath of what happened in the trial is about the legacy of women who are blamed for the assaults upon them. That’s an important cultural message to revisit now and keep pushing forward. If that’s a way to honor Jennifer’s legacy, then I’m happy with that.”

Editor’s Note: This piece has been updated to clarify that it was Ricki Stern, not Annie Sundberg, who knew Robert Chambers in high school.

—Inside the Oscars’ self-inflicted Best Foreign-Language Film headache
—The non-Mandalorian Disney+ series do little to distract from nostalgia
—The Kingmaker tackles the truths and “horrors” surrounding Imelda Marcos
—Honey Boy director Alma Har’el carves out space for female filmmakers
—Oscars 2020: Welcome to the wildest screenplay competition ever
Follow Fortune on Flipboard to stay up-to-date on the latest news and analysis.