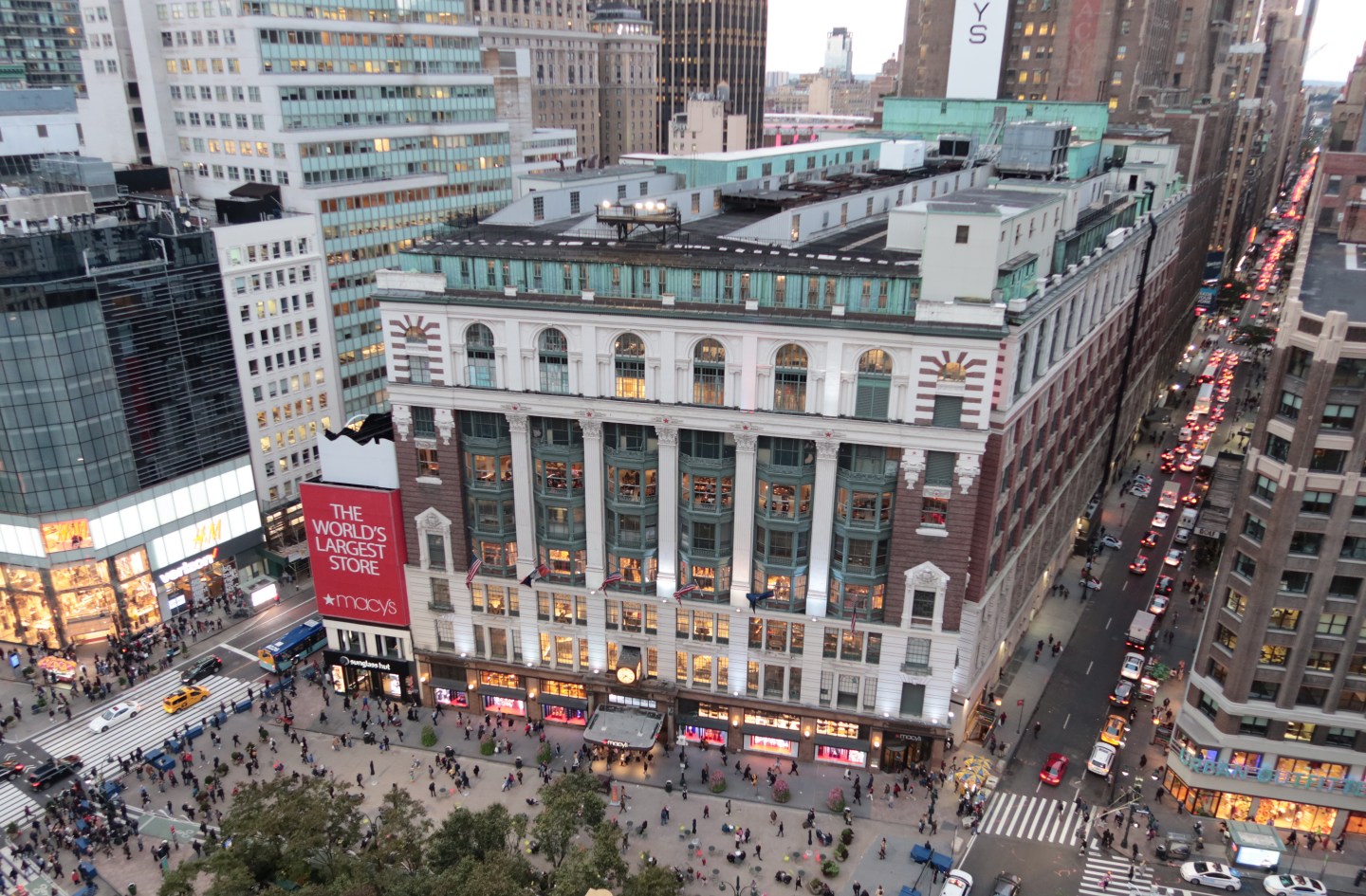 No one can accuse Macy’s of inertia.

The department store chain has been renovating its best locations, opened off-price Backstage boutiques inside hundreds of stores, revamped its loyalty program, introduced concepts like its rotating Story at Macy’s shops, launched ThredUp vintage clothing boutiques, and opened shops for e-commerce retailer B8ta, among its many efforts to become a 21st century department store.

Yet for all its efforts, Macy’s business is struggling badly: the company on Thursday reported that comparable sales in the third quarter fell 3.9%, leading it to lower its profit forecast for the second time this fiscal year in an ominous sign as it heads into the peak holiday season. Adding to the gloom: for the first time in a decade, quarterly online sales grew less than 10%.

Macy’s shares continued their year-long decline and are now 50% below where they started the year.

Macy’s Chief Executive Jeff Gennette told Wall Street analysts on a conference call that the results stem from a combination of warm weather that delayed the purchase of cold weather clothing, continued softness in business from international tourists (a big factor at its Manhattan flagships and at its Bloomingdale’s chain) that fell 6.3%, and “weaker than anticipated performance in lower tier malls.”

The last factor represents a particularly ominous development for the 640-store chain. The retailer’s massive New York City flagship gets a disproportionate of attention: it houses luxury brands like Louis Vuitton, a mini Apple store, a large Story at Macy’s and top notch restaurants. That store, and another 149 stores in the best malls that also get more investment from Macy’s, generate about half of Macy’s in-store revenue.

But the fact remains that Macy’s operates a sprawling fleet, and many locations in the remaining 490 stores or so get minimal upkeep and reduced staffing. Gennette has previously said such stores, typically in weaker malls that have lost a Sears or a J.C. Penney and the traffic those stores brought, cover their expenses and are essential to protecting Macy’s reach in smaller markets and serve as distribution nodes for e-commerce as well.

“They still form a pretty important part of our strategy,” Gennette tells Fortune. “If we close that store we’re closing most of the online business as well.”

Yet many such Macy’s stores are cluttered, messy and unappealing, and to have such varying calibers in its fleets likely creates incoherence in brand image. Indeed, business at those stores saw “a steeper decline” in the quarter than Macy’s had expected, finance chief Paula Price told investors.

GlobalData Retail managing director Neil Saunders said in a note that many such stores “are hard to navigate and do not meet the needs of the modern consumer in terms of the services or offer they present” and “are dragging Macy’s down.”

Gennette would not say whether Macy’s would pare its fleet (a few years ago it closed 200 locations) but said the company will address the issue at its investor day on February 5 when it will present a three-year business plan.

Similarly to Kohl’s report earlier this week, Macy’s blamed some of its woes on the warm weather in September that led shoppers to put off buying new autumn clothing. But Target reported a 10% increase in its apparel business, and neither Kohl’s nor Macy’s operate in micro-climates, suggesting that their problems have a lot to do with the desirability of what they’re offering.

While Kohl’s said it wants to become less reliant over apparel over time, Gennette sees that category as central to Macy’s. “When you look at our customer, they still come to Macy’s primarily because we’re fashion apparel retailer,” he told Fortune. At the same time, as TJX’s stellar results this week showed, discount chains like T.J. Maxx march on, undeterred by the department stores’ efforts.

Macy’s is betting that initiatives like Story at Macy’s, a lively shop that changes out its merchandise every six weeks according to a theme, will succeed “changing the narrative of being a stodgy department store” as Gennette puts it and inspire its merchants to be adventurous. But it’s only at 36 stores and in some stores, it’s hard to find, so it’s not likely to move the needle much anytime soon.

Macy’s now expects comparable sales, a metric that includes e-commerce but excluded results from newly opened or closed stores, will now be down between 1% and 1.5%, well below its previous forecast. What’s more, the company eked out the tiniest of profits, with net income of $2 million on sales of $5.17 billion.

Gennette said that one factor that contributed to Macy’s sales decline was the decision to give up some sales in the housewares category. Macy’s decided to not discount some houseware items even as rivals did, sacrificing some sales while protecting margins. At the same time, with so much overlap with what other chains sell, in any category, it will be hard to avoid the deals, deals, deals ethos in its area of retail. As Gennette acknowledged, “We’re a promotional department store.”

What’s becoming clear is that Macy’s myriad initiatives are not adding up of far to a reinvention of a historic department store able to withstand all the changes in retail.