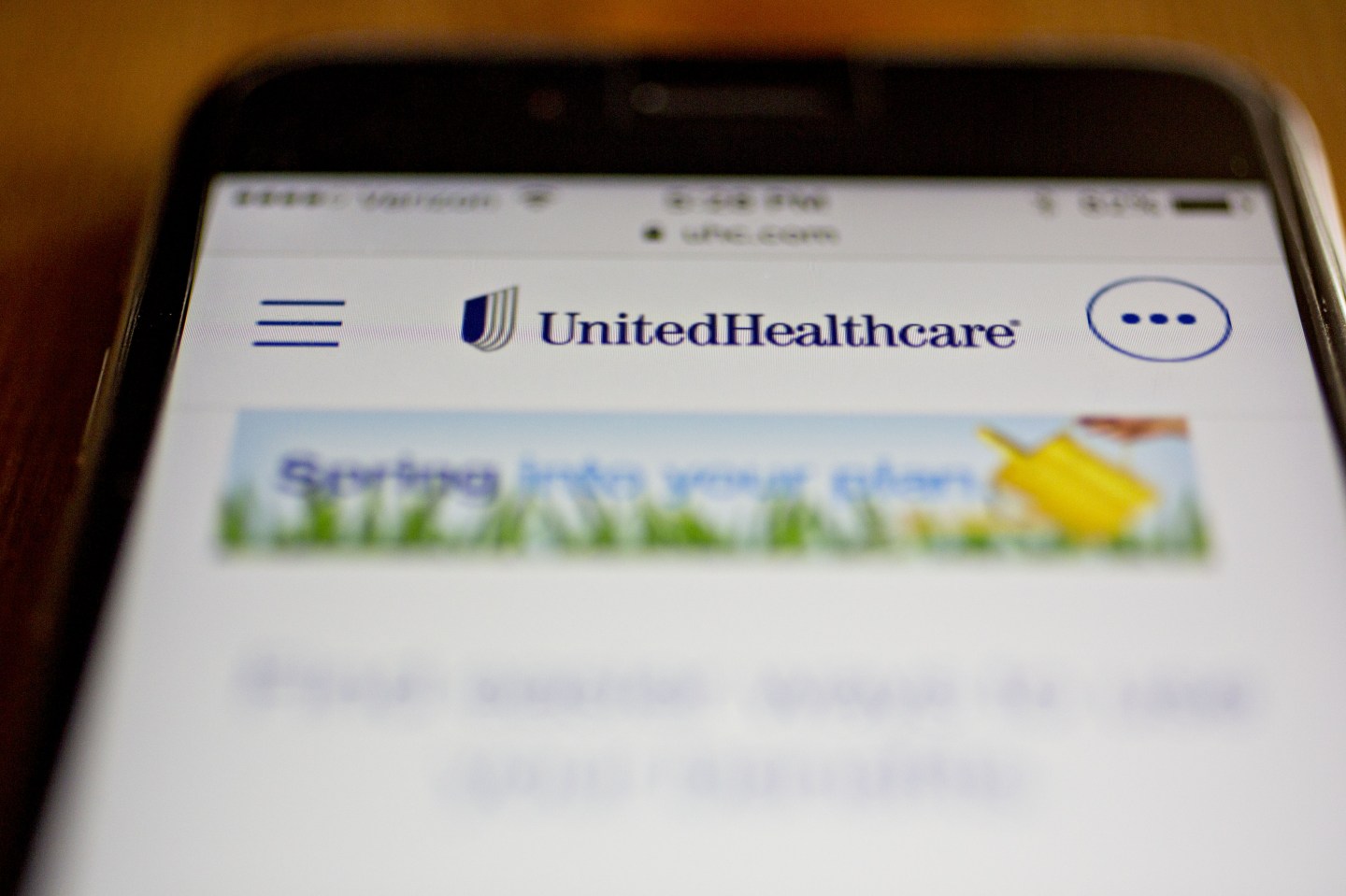 The UnitedHealthcare website, the health benefits segment of UnitedHealth Group, is displayed on an Apple iPhone in Washington, D.C. UnitedHealth has rallied 15% after saying its revenue ($60 billion) and earnings ($3.67 per share) in the third quarter both beat analyst estimates.
Andrew Harrer—Bloomberg via Getty Images

The latest quarterly parade of corporate earnings reports is winding down. Around 90% of companies in the benchmark S&P 500 have posted their third-quarter financials, with most coming in the past four weeks. So now is a good time to take stock of what it told us about the U.S. economy.

Of course, some big name companies are expected to announce their third-quarter earnings this week, including Walmart, Nvidia, Cisco, and CBS. As for the nearly 450 companies in the S&P 500 that have already reported, three in four saw profits above Wall Street expectations, with their stocks rising an average of 2.3% on the news, according to Factset. Those that disappointed fell an average of 1.8%.

But some surprises are bigger than others. Jewelry retailer UnitedHealth has rallied 15% since reporting its earnings, while Expedia has fallen 27% after its report. Here are three of the biggest winners and losers, in terms of stock performance, of the fall earnings season, along with what each one tells us about the current state of the U.S. economy as we head into 2020.

JPMorgan started the earnings season off on a positive note, reporting revenue and profits both up 8% from a year ago. The stock closed at a record high last Friday, having risen more than 12% since its earnings date. The bank saw strength in its consumer banking businesses: credit cards, mortgages, and auto loans.

The takeaway: Financial stocks have been weighed down by concerns that interest-rate cuts from the Federal Reserve would hurt their ability to make money. But the Fed is now signaling it’s done cutting for a while. And in the meantime, consumers are content to keep spending—and borrowing to do so.

UnitedHealth has rallied 15% after saying its revenue ($60 billion) and earnings ($3.67 per share) both beat analyst estimates. The largest U.S. health insurer saw growth both in its insurance platform and its Optum health-services business, despite investor concerns about the Medicare for All platforms put forth by several Democratic presidential candidates—a proposal that’s slipped in the polls, but is still favored by a majority of Americans.

The Takeaway: Elizabeth Warren, Bernie Sanders are campaigning on Medicare for All, while Joe Biden and some others prefer other health-care reform options. While all pose an uncertain future for insurers, investors are focusing for now on the short-term outlook of companies like UnitedHealth.

Qualcomm is up 9% since reporting a net income of 78 cents a share, beating analyst estimates by 7 cents a share. Semiconductor stocks are volatile and Qualcomm is no exception. A year ago, the company was hurt when Apple stopped using its chips during a patent dispute. But last week, CEO Steve Mollenkopf said demand for 5G smartphones would increase its sales in the coming year.

The takeaway: Sales of smartphones have been sluggish, but Qualcomm’s outlook suggests they could get a boost in 2020 as 5G networks ramp up around the world. Qualcomm “is well positioned to benefit” from that trend, Canaccord Genuity analyst T. Michael Walkley said in a report.

Hasbro shares have tumbled 20% since the company posted earnings of $1.84 a share, missing forecasts by 36 cents. The maker of Monopoly and Play-Doh has relied heavily on Chinese manufacturing. Despite working to shift manufacturing to other countries, the continuing back and forth of the U.S. China trade war is taking its toll.

“The threat of and the implementation of tariffs in certain instances impacted our shipments and our ability to fully meet demand,” Hasbro CEO Brian Goldner said on a call with shareholders. This creates “ripple effects” on company orders “whether or not tariffs are ultimately enacted,” he said.

Expedia’s $3.6 billion revenue fell slightly below forecasts, while earnings of $3.38 a share came in 43 cents a share beneath them. The stock has slid 27% since reporting those numbers last Wednesday. Other online-travel stocks like TripAdvisor also fell amid concerns that tweaks to Google’s search engine could affect their marketing campaigns.

The takeaway: Like Facebook, Google is always changing its product. This can affect companies using search-engine optimization to reach new customers. “The most concerning trend is the reduced efficiency of SEO marketing as Google pushes ‘free’ links further down the page,” Piper Jaffray analyst Michael Olsen said about Expedia’s earnings. “Expedia is having to resort to the use of higher-cost marketing channels.”

Yum Brands has seen its stock fall 10% since announcing its earnings of 81 cents a share, which fell short of the consensus estimate by 13 cents. The owner of Pizza Hut and Taco Bell took a hit from its investment in delivery app Grubhub. But the stock had also grown too expensive in the past year, with its price-earnings ratio rising to 31 last month from 16 in mid-2018.

The takeaway: 2019 has been a banner year for stocks, with the Dow Jones Industrial Average rising 19% so far this year. But that has left many stocks priced to perfection—that is, with little room for error. Not only did Yum hold a piece of Grubhub (with a PE ratio of 865), its own valuation left investors ready to sell on bad news, however modest.