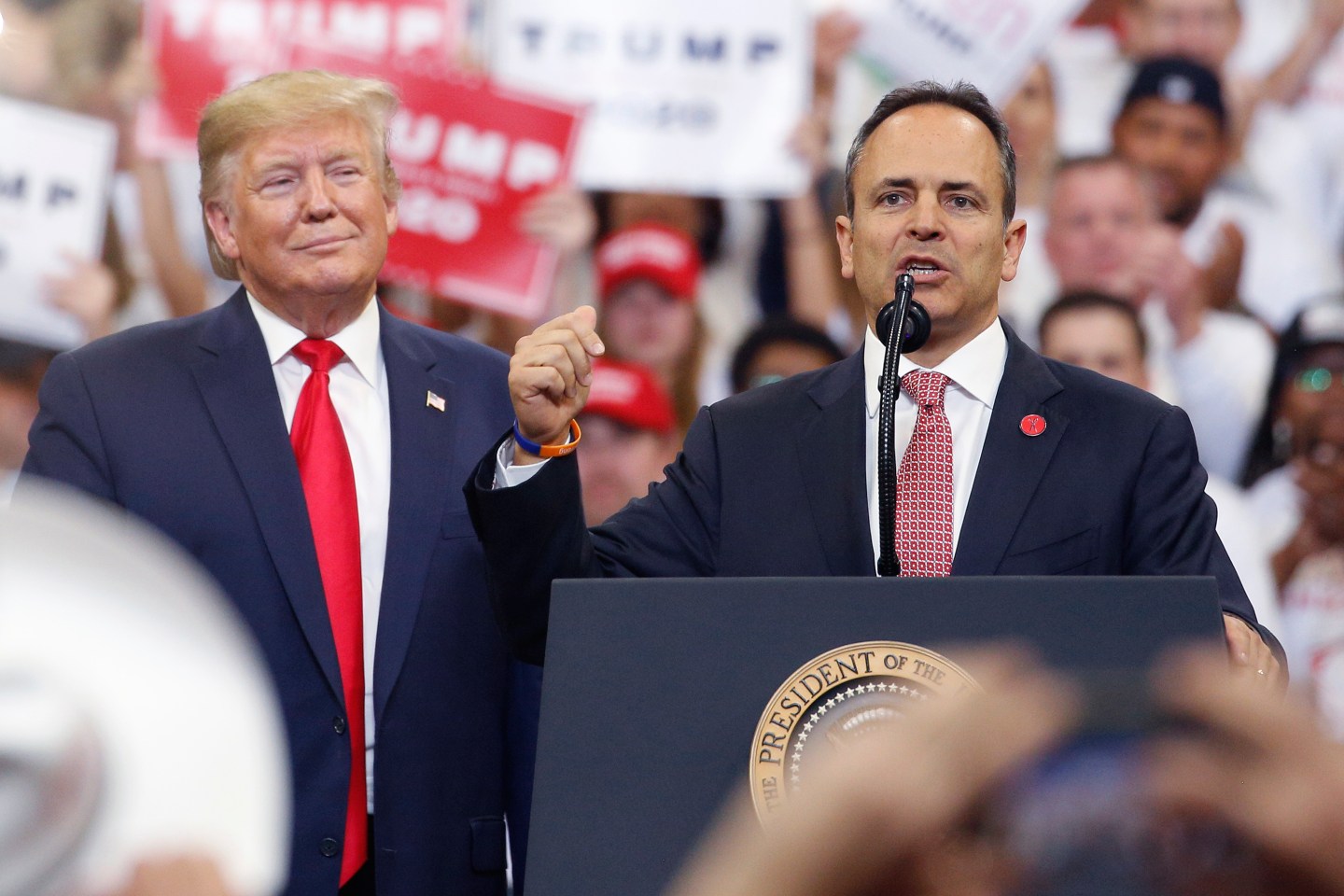 Democrats celebrated an early win in the ruby-red state of Kentucky last week when Attorney General Andy Beshear narrowly beat incumbent Governor Matt Bevin in a tight gubernatorial race. But instead of delivering his concession speech, Bevin took a page out of President Donald Trump’s political playbook: He questioned the integrity of the election itself.

“What we know is that there really are a number of significant irregularities,” Bevin said of the 5,000-vote difference between him and Beshear outside of the governor’s mansion on Wednesday. He wouldn’t go into specifics about what those irregularities were because “we’re in the process of getting affidavits [about them] and other information that will help us to get a better understanding of what did or did not happen,” but claimed that “we know there have been thousands of absentee ballots that were illegally counted.”

Bevin did not take follow-up questions from reporters and no election officials have backed his theory. Still, Kentucky has agreed to recanvass the vote (a process where vote tallies are reprinted from each machine) on Thursday. The efforts aren’t expected to make a difference in the results.

Bevin follows in the footsteps of a string of politicians who, instead of conceding an election loss, cry foul play.

President Donald Trump, after losing the popular vote in 2016, claimed that millions of voters in California committed fraud. “In many places, like California, the same person votes many times—you’ve probably heard about that,” Trump said. “They always like to say ‘oh that’s a conspiracy theory’—not a conspiracy theory folks. Millions and millions of people.”

In the 2018 midterm elections, when it appeared that Sen. Rick Scott (R-Fla.) might not win his race, he held a press conference to question the security of the election. “Every Floridian should be concerned there may be rampant voter fraud in Palm Beach and Broward counties,” he said. “I will not sit idly by while unethical liberals try to steal this election from the great people of Florida.”

In 2016, emails where Wisconsin Republican officials used election fraud as a political strategy were released to the public. In one message, Steve Baas, a former Republican legislative staffer and government relations director of the Metropolitan Milwaukee Association of Commerce suggested beginning to message “‘widespread reports of election fraud’ so we are positively set up for the recount regardless of the final number?” before any official election results were in. “I obviously think we should,” he added.

Election security experts worry that this trend will continue well into the 2020 elections, with potentially devastating impacts.

“Vladmir Putin could not create better content than what the extreme sides of both political parties are creating here in the United States,” said David J. Becker, executive director and founder of the Center for Election Innovation & Research. “I fully expect that if it’s a close election in 2020, and even if it’s not a close election in 2020, that there will be a candidate that would rather rile up their base and delegitimize the winner than to accept defeat graciously.”

While it’s exceedingly difficult to actually hack an election and voter fraud is incredibly rare, the bipartisan Select Committee on Intelligence and Mueller report both suggest that Russian and other foreign agents find it easy to pick up and amplify messaging that delegitimizes the democratic system.

By propagating claims of voter fraud without hard evidence, politicians are playing into the hands of Russia, said Becker. “What we’re seeing now from both the left and the right is activity that helps our adversaries, that aids them in the narrative that voters shouldn’t trust the outcome of elections,” he said.

David Levine, an elections fellow at the Alliance for Securing Democracy calls it perception hacking, or the “notion of relying on public expectations of manipulation or the insecurity of voting systems to claim interference” in order to “make voters, especially those who are not pleased with the outcome of an election, doubt its legitimacy.”

A study by New York University’s Brennan Center for Justice found that incident rates of voter fraud in the U.S. range between 0.0003% and 0.0025% and concluded it’s more likely that an American “will be struck by lightning than that he will impersonate another voter at the polls.”

Still, 38% of all Americans said they would be “not very confident” or “not at all confident” that an election had been conducted fairly if their candidate lost, according to an August USA Today/Suffolk University poll. The top reason given by Republicans who lacked confidence in the system was voter fraud.

Russian interference in the 2016 elections centered around a highly successful disinformation campaigns that use trolls and bots to spread rumors of voter fraud and unsafe voting systems on social media, and are already doing the same this time around.

“We should be very worried about the impact on American voters and citizens,” said Becker. “What the Russians and others are trying to do is get citizens of our democracy and other democracies to lose confidence not just in our own government but in the idea of democracy, that elections matter and have consequences.”

“If people don’t have faith in the system, then the system isn’t going to work,” said Lawrence Norden, deputy director of the Democracy Program at the Brennan Center agreed. “It’s built on the belief that the people can be a check on elected officials and if you don’t have faith, then the whole project of democracy comes into question.”

More than 90% of Americans in battleground states will be voting in 2020 on paper ballots or machines with paper backups, meaning there will be a system in place for auditing and preventing fraud, he added. Still, there are serious problems with voting systems that are decades old and insecurely connected to the internet.

“We have to try to both address vulnerabilities while increasing voter confidence, that’s a real big challenge for election officials,” said Becker.

Nordon, meanwhile, believes that the media needs to do a better job at explaining why voter fraud isn’t a serious threat and that The federal government “needs to engage more into the oversight” of voting machines and systems.