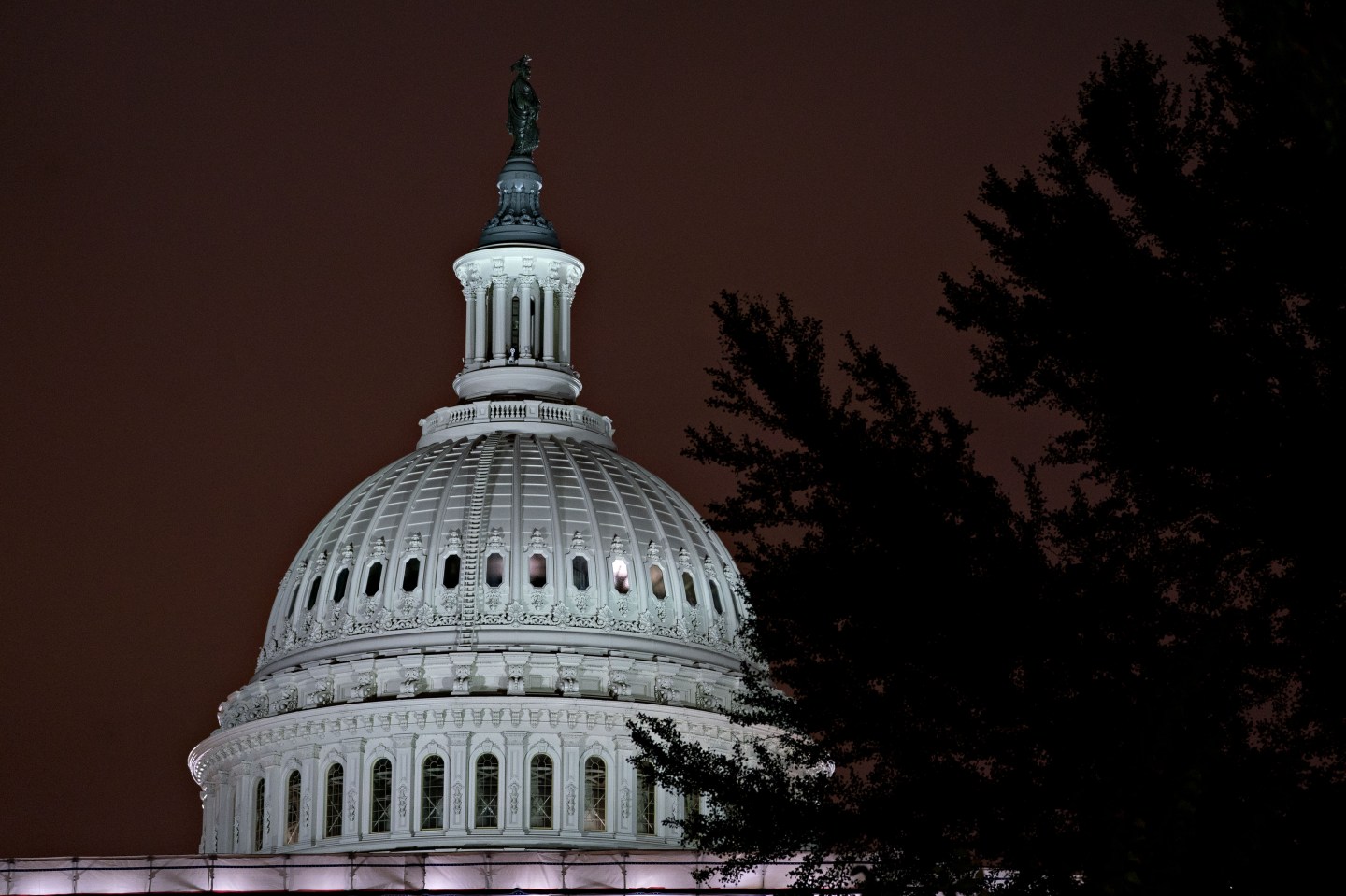 Existing funding for the government expires on November 21, and without an agreement between Republicans and Democrats, the U.S. could face a second government shutdown in less than a year.

While Congress appears poised to pass another temporary continuing resolution to avert the crisis, Trump’s border wall funding demands still haven’t been negotiated, and Democrats fear Trump could use that point of contention to draw attention away from the impeachment inquiry.

“He always likes to create diversions,” Senate Minority Leader Chuck Schumer told reporters last week. “I hope and pray he won’t want to cause another government shutdown because it might be a diversion away from impeachment. It’s very worrisome to me.”

Even if the Republican Senate passes a continuing resolution—which would keep the government open temporarily using pre-existing terms in the event a yearlong budget can’t be agreed upon—Trump has the authority to veto it. But analysts say this would only cause new problems for Trump.

Steven S. Smith, a congressional expert and political science professor at Washington University in St. Louis, said the political costs are just too high for Trump to risk causing another shutdown.

“A veto would upset congressional Republicans and almost certainly would be viewed by the public as unnecessary and harmful,” Smith told Fortune. “It would not improve his situation in Congress or in the electorate.”

Trump’s approval rating took a significant hit during the last government shutdown and hurt his reputation on the Hill. And Trump’s Republican allies are already on the defensive, said Josh Huder, a senior fellow at the Government Affairs Institute at Georgetown University.

“The worst thing Trump could do is make Republicans on the Hill angry,” Huder said, “which he would do if he drove the shutdown forward. Trump is already fighting for both public support and congressional support so going down the road of a shutdown would be politically risky.”

A shutdown for Trump would only mean “piling a crisis on top of a crisis,” according to Gregory Koger, an associate professor at the University of Miami and a former legislative assistant during the 1995-1996 government shutdowns.

“Republicans lost so badly in the [shutdown earlier this year] that they don’t want to go through the same political costs again,” he said. “The president may not fear a battle as much as Congressional Republicans, but in this case they have the ability and incentive to stand up to him on the issue of funding.”

As for the impeachment inquiry itself, a government shutdown would have little impact, since many if not all Congressional staffers would likely be considered “essential” and expected to continue their work. They would continue to get paid, albeit not on schedule, since their salaries are authorized in the appropriations bill.

“Staffers would have a lapse in money but it’s unlikely to affect the impeachment so long as a shutdown isn’t a month-long endeavor,” Huder said. “Everyone on the Hill will operate on the assumption that they’ll get back pay.”

In the mean time, both Republicans and Democrats have expressed optimism as far as each of their parties are concerned.

“House Democrats will pass whatever legislation is necessary to keep the government up and running,” a Democratic member of the House Appropriations Committee staff told Fortune. “Unless Senate Republicans or President Trump block that legislation, there will not be a shutdown.”

But that same staffer also noted that until Senate Republicans drop the “extreme demands” of funding the border wall, the government likely have to proceed under a continuing resolution.

And that is one thing both parties seem to agree on.

But a continuing resolution is only a stopgap measure, meaning that Trump and lawmakers from both sides of the aisle will be faced with the same issues and obstacles later that they face now.

“Enacting a continuing resolution for a month or two will delay the crisis that might be inevitable,” Smith said.

Congress has the power to determine how long that delay would be—it could range from as little as a month, lasting only until December, or theoretically extending for a full year.

Last week, the Senate passed a package of four of the 12 appropriations bills to fund a number of agencies through next year, including the Departments of Agriculture, Transportation, and Interior. But there remain a number of sticking points, including funding for Trump’s border wall.

—Paul Ryan’s new foundation makes poverty experts and Medicare advocates nervous
—Wall Street’s scorn for Elizabeth Warren boils over
—Trump’s national parks changes could, ironically, help Jeff Bezos
—Sherrod Brown has some advice for 2020 candidates hoping to win in Ohio
—Prisoners are fighting wildfires on the front lines, but getting little in return
Get up to speed on your morning commute with Fortune’s CEO Daily newsletter.