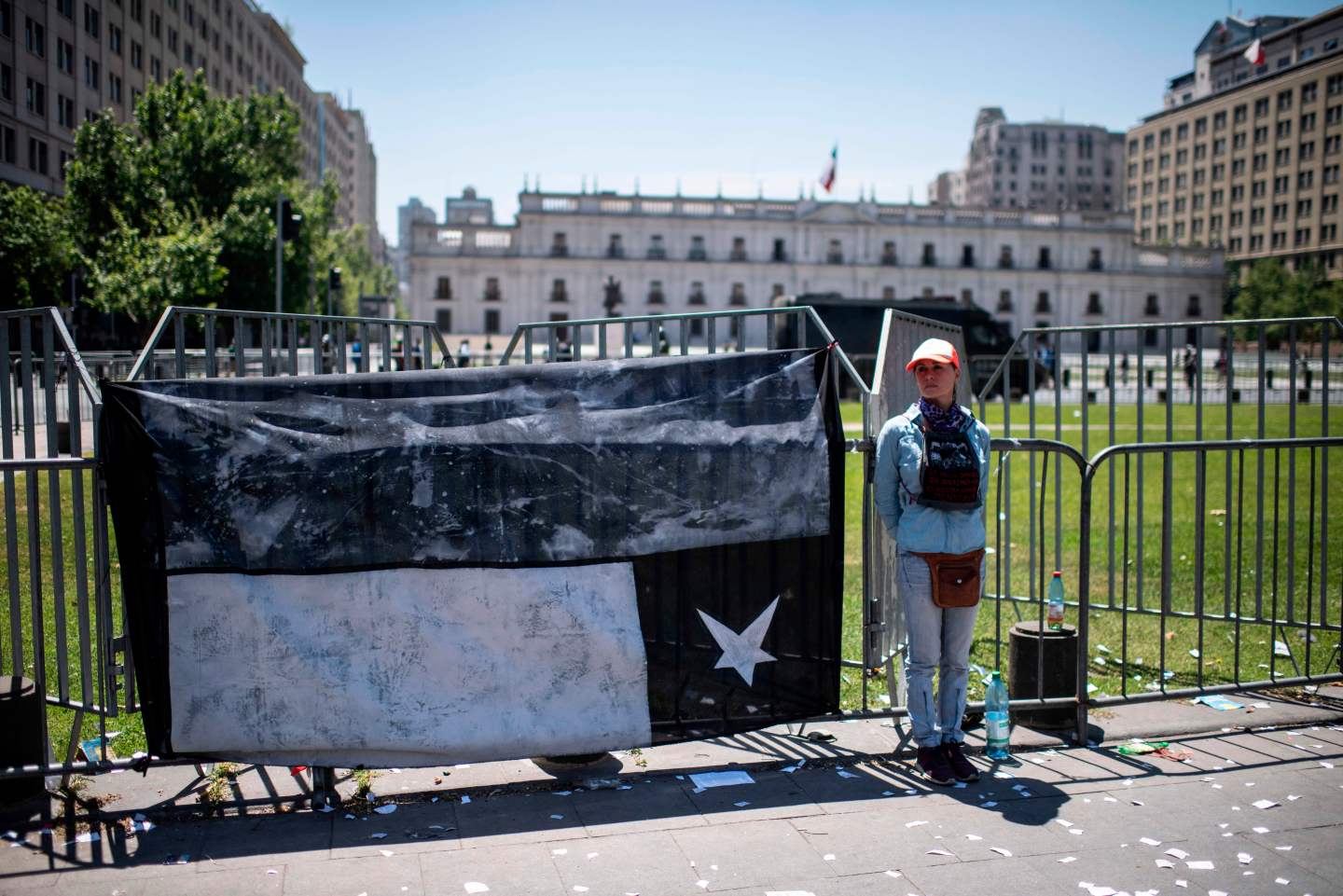 A woman stands next to an intervened Chilean national flag during a demonstration against the government economic policies in front of La Moneda presidential palace in Santiago, on October 30, 2019. - Chile pulled out of hosting two major international summits Wednesday as it struggled to restore order amid clashes between protestors and security forces that have left at least 20 dead. President Sebastian Pinera said "common sense" had dictated the decision to withdraw from the Asia Pacific Economic Cooperation summit and the Cop 25 climate change conference. (Photo by Pedro Ugarte / AFP) (Photo by PEDRO UGARTE/AFP via Getty Images)
Pedro Ugarte—AFP/Getty Images

Protestors in Chile, enraged by low wages and pensions, rising costs of living and even by the impacts of climate change on their daily lives, may have inadvertently set back the worldwide climate negotiation process after escalating street violence led to the cancelation of a key climate summit in their nation’s capital.

The weeks of protests—which have so far left 20 dead, hundreds injured, and have put pressure on President Sebastian Pinera to step down—are the bloodiest in Chile in more than a generation. They have forced Pinera to back out as host of two major summits: the Nov. 16-17 Asia-Pacific Economic Cooperation (APEC) gathering and the 25th Conference of the Parties (COP-25) set for Dec. 2-13.

It is the first time a host for either gathering has backed out so close to the events’ opening session.

The APEC decision is significant as it’s where President Donald Trump said he had planned to sign a new trade deal with China.

But Chile’s cancellation of COP-25 could likely have far-reaching consequences, too. For starters, the countries are supposed to submit at COP-25 their national plans on climate action, which could include anything from mitigation strategies that involve reducing emissions to new climate adaptation plans for their citizens.

The clock is ticking

The Inter-governmental Panel on Climate Change said last year that “global carbon dioxide emissions [must] start to decline well before 2030”—a statement that gave birth to the “12-year deadline” mantra popular with climate advocacy groups. That set the clock ticking for countries and industry alike to address the impact emissions that they generate will have on the global environment.

With COP-25 in limbo, some now fear that it could set the process back by months, if not a full year, when it really cannot spare any kind of delay.

“What we are seeing is clear evidence of the need to implement transformational changes of the current development paradigm towards a new model of development,” said Alejandro Aleman, head climate change officer for the Centro Humboldt, a climate advocacy group in Nicaragua.

Formally, the United Nations is now scrambling to find an alternative host site for the talks. Madrid has offered to step in and host, UN organizers said late on Thursday.

Earlier in the day on Thursday, sources close to the process told Fortune that should a new host not come to the fore, the most likely outcome would be a scaled-down version of the meetings to be held in Bonn, Germany, near the headquarters of the UN’s climate change secretariat. Regardless, it remains far from clear the impact a change of venue barely five weeks before the start of talks will have.

What is clear, officials say, is that growing levels of economic and political unrest in hotspots around the world are having a negative impact on already slow-moving climate negotiations, even before the Chilean government hastily canceled the talks on Wednesday.

In 2018, Brazil emerged as the favorite to host the annual COP-25 talks, which rotate between five geographic regions. But those plans were dropped amid opposition from populist groups, in particular those who support Brazilian president Jair Bolsonaro, a climate skeptic.

Next year’s summit, COP-26, is set to take place in Great Britain (Italy will host some lead-up meetings), which may still be on its heels after what will, by then, be four years of Brexit fallout.

And next week, the United States will begin the process of formally withdrawing from the 2015 Paris Agreement after the required three-year waiting period expires. The U.S. withdrawal cannot be completed in less than a year, which means the earliest it will become final will be Nov. 4, 2020 (the day after the upcoming presidential election).

The COP-25 talks are the successor to the high-profile COP-3 meetings in Kyoto, the COP-15 negotiations in Copenhagen, and COP-21, which produced the Paris Agreement.

The latter summit is why the talks in the Chilean capital of Santiago are so key. The Paris Agreement is a complex set of goals aimed at keeping global climate change to within a maximum of 2 degrees Celsius (3.6 degrees Fahrenheit) this century. Countries were supposed to start revealing the steps they plan to take to reach that goal in Santiago.

But the daily turmoil in the streets of the capital is shifting the world’s attention from one crisis to another.

“Across the world, the vast majority of people agree that climate change is a serious threat,” John Virtanen, a Helsinki-based author and analyst specializing in geopolitical trends, told Fortune. “The problem is that poverty, an erosion in their quality of life, violence, and other issues are even more pressing issues for them. The economic circumstances are now forcing them to make a choice.”

This story has been updated to reflect the news that Madrid has offered to host COP-25.

—Brexit is being delayed yet again. So what happens now?
—Young professionals are buying fixer-uppers in Europe for one euro and starting over
—Norway is a green leader. It’s also drilling more oil wells than ever
—A.I. regulation is coming soon. Here’s what the future may hold
—Offshore wind power’s time has finally come, IEA saysCatch up with Data Sheet, Fortune’s daily digest on the business of tech.