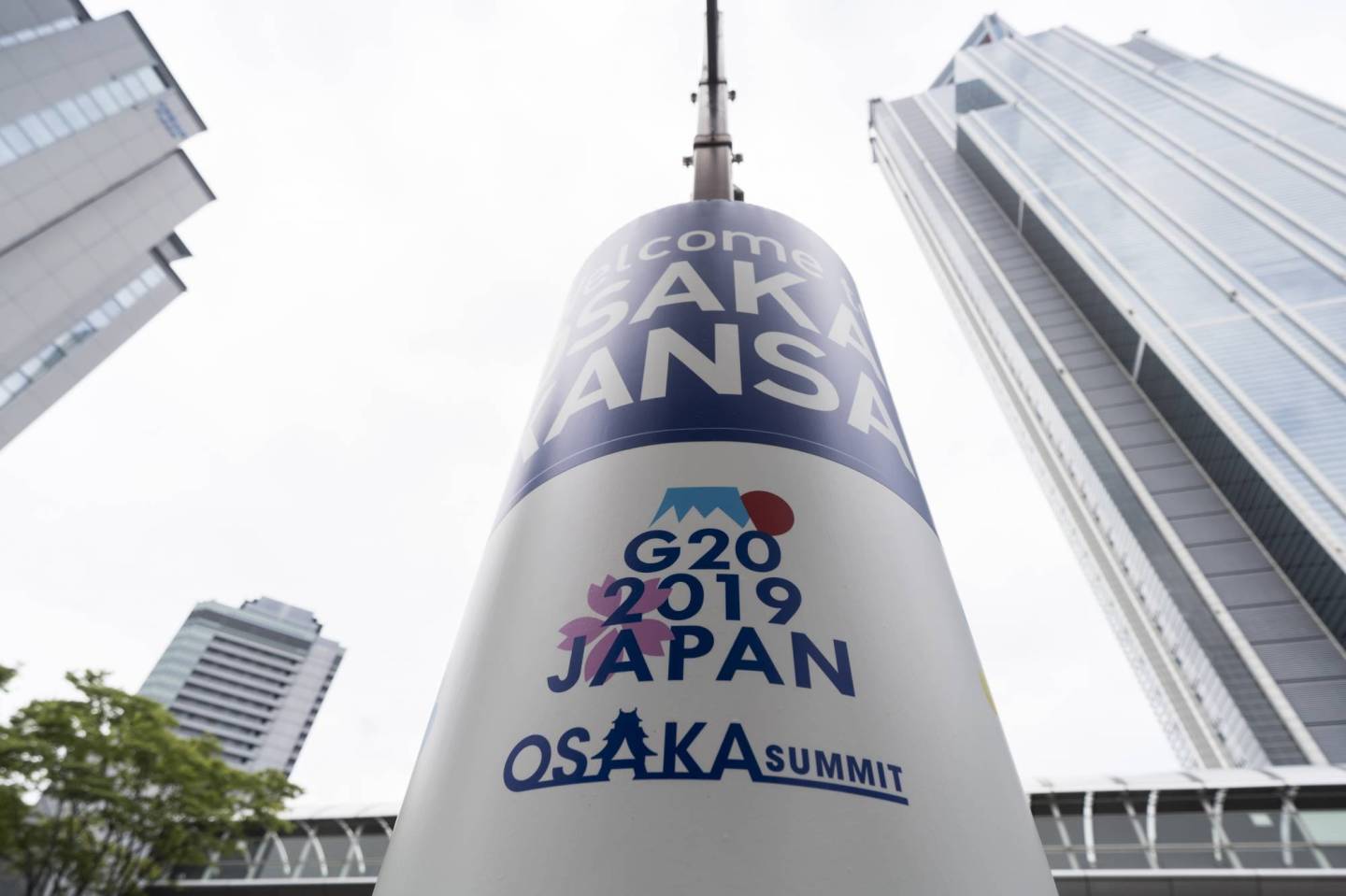 OSAKA, JAPAN - JUNE 26: A sign for the G-20 Summit is displayed near the Intex Osaka, the venue for the summit on June 26, 2019 in Osaka, Japan. World leaders will use the summit to discuss issues including climate change and the global economy. The two day summit is also expected to see extended talks between U.S President Donald Trump and China's President Xi Jinping in an attempt to resolve the ongoing trade war between their two countries. (Photo by Tomohiro Ohsumi/Getty Images)
Tomohiro Ohsumi Getty Images

Their optimism was kindled last Tuesday by a Trump tweet revealing the two leaders had spoken by phone and agreed to an “extended” parley in Japan. Over the weekend, numerous media floated the idea that the White House would suspend the next round of tariffs on $300 billion of Chinese imports–the ones that could hit every tech product from iPhones to Fitbits–if discussions resumed. On Monday, U.S. trade representative Robert Lighthizer and Chinese vice premier Liu He agreed on an agenda for the Osaka meeting in a telephone call both sides characterized as productive.

Reuters, quoting an unnamed senior administration official, reported that “Washington will not accept any conditions around the U.S. use of tariffs in the dispute.” Trump would bring no concessions to Osaka, said the source. Stocks tumbled, marking the biggest drop in a month, led by the tech sector. Hardware makers Cisco Systems, Hewlett Packard Enterprise, and Apple dropped 2% each. Microsoft, Netflix, and Google fell 3%. “Crow will apparently be on the menu at Saturday’s pivotal summit,” intoned Investors Business Daily. “The odds of a feel-good sit-down…just took a major hit.”

In fact, those odds were never very high. The trade and tech war has been on a high boil since May 15, when Trump placed Chinese telecommunications equipment giant Huawei Technologies on a national security blacklist barring it from purchasing U.S. components or technologies without government approval. China responded with threats to withhold crucial rare earths from U.S. technology companies, and a vow to devise an “unreliable foreign entities” list of its own. On Friday, the Commerce Department turned up the heat by adding four Chinese companies and a state-owned institute to the U.S. blacklist, citing concerns that supercomputer technologies being developed by those groups might have military applications.

The tech tit-for-tat prompted a dire assessment from former U.S. Treasury Secretary Henry Paulson, who warns in Tuesday’s Financial Times that “after 30 years of globalization, we now face the very real prospect that an economic iron curtain may descend” between the world’s two technology superpowers. Paulson fears such a separation might ultimately “undermine America’s own ability to innovate.” MIT president L. Rafael Reif sounded a similar alarm yesterday in an open letter lamenting that rising tensions between the United States and China risked creating “a toxic atmosphere of suspicion and fear” in America’s leading universities and research centers.

“Faculty members, post-docs, research staff and students tell me that, in their dealings with government agencies, they now feel unfairly scrutinized, stigmatized and on edge – because of their Chinese ethnicity alone,” Reif wrote. “Nothing could be further from–or more corrosive to–our community’s collaborative strength and open-hearted ideals.”

Those ideals may be in short supply in Osaka this Saturday.

The loopholes we have in ourselves. While we're on the subject of the President's trade war, some tech companies are finding ways to get around the limits on sales to Huawei. Chipmakers including Intel and Micron are labeling some of their products made wholly overseas as not American made. Micron CEO Sanjay Mehrotra told investors on Tuesday that his company determined it "could lawfully resume shipping a subset of current products."

Resistance. The horrific treatment of children at the U.S. border is alarming some in the tech community. Hundreds of employees at Boston-based Wayfair are planning a walkout on Wednesday to protest the company's sales of furniture to federally-contracted facilities holding detained immigrant kids.

Teller-free. British online bank Monzo raised $144 million of venture capital in a deal that valued the startup at about $2.5 billion, double its valuation in a fundraising round last October. While adding 200,000 new customers a month in the United Kingdom, Monzo is also making plans to enter the U.S. market. But the newest unicorn may be online sneaker market StockX, which just pulled in $110 million of backing at a $1 billion valuation and hired eBay senior vp Scott Cutler as its new CEO.

Hanging up. Not every startup is still in unicorn growth mode, of course. Call9, which created a video conferencing service connecting doctors with nursing homes, is shutting down after raising a total of $34 million, CNBC reports. CEO and founder Dr. Timothy Peck famously spent three months sleeping on a cot in a Long Island nursing home to get to know the market.

Snatched from the hazardous flux. Speaking of failing startups, autonomous vehicle company Drive.ai was on the way to Palookaville when a rescuer emerged. Apple is buying the company, which emerged out of Stanford's A.I. lab, for an unknown amount in what is largely being described as an aquihire.

Crocodile tears. What's the opposite of Palookaville? Billionaire-istan? Bloomberg's Billionaires Index noted a strange divergence this week in the value of Elon Musk's assets. With Tesla shares down more than 33% this year, Musk's stake in still-private SpaceX is now worth double the value of his Tesla shares, nearly the opposite ratio of prior years. Still, shed no tears for Elon. His net worth is still estimated at over $22 billion.

The challenge of attracting a more diverse talent base to the tech industry can appear almost unattainable at times, with the rate of progress too slow to measure. TechCrunch's Megan Rose Dickey talked to some of the top advocates for inclusion in Silicon Valley to assess the situation, look at root causes, and explore strategies for improving. Leslie Miley, a former manager at Twitter, Google, and Apple, tells Dickey that the issues aren't going to be resolved anytime soon:

“I think we may have hit the limits of easy wins and everything else now is hard,” Miley says. “And it’s hard because it’s not which program you can sponsor, it’s not having an apprenticeship program, and it’s not increasing the types of people in your pipeline. It’s the hard work of transforming your workforce to understand the value people bring to the table is not necessarily your path. You sit and go through what people say in Blind about people lowering the bar, people wanting to maintain the culture. They hold onto it like they’re constipated. I don’t get it.”

Can TikTok Turn 950 Million Downloads Into a Booming Business? By Eamon Barrett

From Peanuts to $40 Billion, Amazon's Ad Business Set to Be the Next Great Disruptor By Berhard Warner

T-Mobile Is Adding 5G-Mobile Service: Here's What You Need to Know By Aaron Pressman

Everyone would love to watch a "Spotify of TV," but it's never going to happen. Sadly, we're moving rapidly in the wrong direction. The latest splintering news arrived this week, as Comcast's NBC Universal said it would pull The Office from Netflix starting in 2021, reserving episodes of the hit comedy for its own upcoming streaming service. Sometimes it seems like Hollywood may be taking advice from Michael Scott, who once said: "I knew exactly what to do–but in a much more real sense, I had no idea what to do."