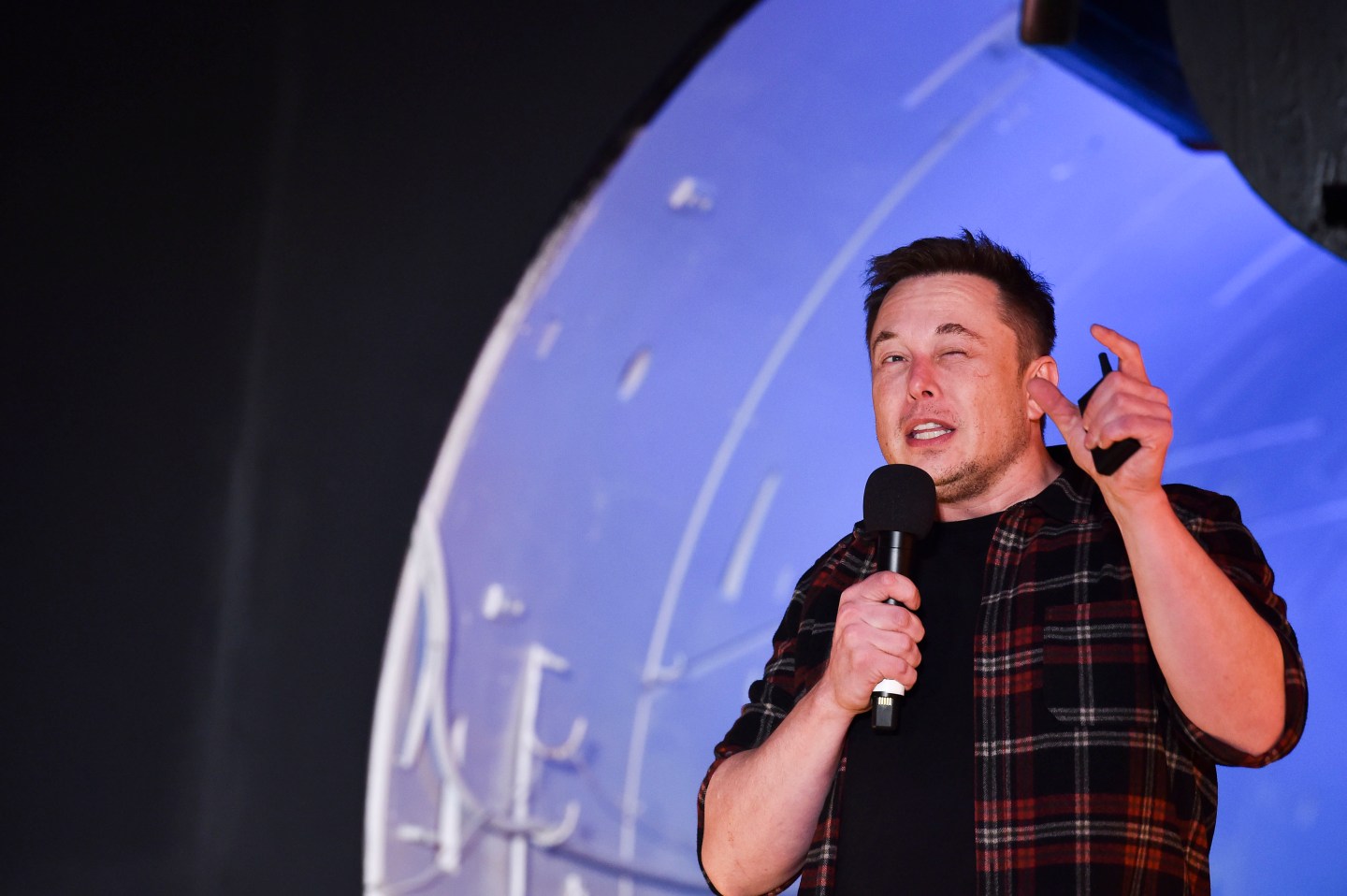 Editor’s note: An updated version of this story published on June 20.

Here’s an argument you hear a lot: the gigantic cash burn rates at the likes of Tesla and Uber are nothing new, because today’s established tech greats also churned through tons of cash in their early years. In fact, we keep hearing from champions of these glamor stocks on business TV shows and pundits’ blogs that constantly raising fresh billions to fund operations is a regular right of passage for tomorrow’s superstars.

Wrong. Look closely at the early days of the giants and you’ll see that they were models of frugality compared with the new wave. I came to that surprising conclusion by comparing the cash flow trends in the first few years of operation for two contrasting groups of companies. The first we’ll call the Fab Four, tech titans that rank among America’s most valuable enterprises: Amazon.com, Apple, Facebook and Google (technically Alphabet). The second category we’ll dub the Breakneck Burners, relative newcomers that reign for devouring cash, Tesla, Uber, Lyft and Snap.

The gigantic chasm in cash burn between the two groups––we’ll save the totals for the finale––illustrate a shift in thinking from backers of the Fab Four to investors in Tesla or Uber. Shareholders in the Breakneck Burners are willing to lavish billions to an extent never before witnessed to both stanch the losses from their basic businesses, and provide fresh capital for growth, in the hopes of creating the next Google or Facebook. It’s true that in the dot.com frenzy of the early 2000s, many tech companies posted losses while devouring loads of new funding. It was the hallmark of the era. But the big burners were such failures as Webvan and eToys.com, not triumphant survivors such as Google that launched in the same era. “It could be a matter of ‘survivor bias,'” says accounting expert Jack Ciesielski. “You’ve got these companies chewing through mountains of cash, and investors are comparing them not with the failures of the dot.com era who did the same thing, but with the survivors, who didn’t.”

For this analysis, the crucial measure is “free cash flow,” (FCF). That number is calculated by taking “cash generated by operating activities,” or cash from operations, minus capital expenditures (capex); both are disclosed on the companies’ “Consolidated Statements of Cash Flows.” Cash from operations is simply all the cash generated from running the business, meaning revenues less all expenses such as salaries, production and materials costs, overhead and interest paid in cash. Capex represents the investments needed either for “maintenance,” keeping existing plants, say, in good shape, or for growth when the funds are deployed for building new factories, warehouses, or sales offices. Naturally, the heavy investments for the Breakneck Burners tilt heavily towards funding rapid expansion.

Burning cash means that free cash flow is negative. FCF is a minus if the expenses of running the enterprise outpace revenues, so that cash from operations makes no contribution towards funding expansion, or if capex is bigger than what the company is generating from operations. The Breakneck Burners typically feature both negative cash from operations and big capital expenditures, resulting in extra-large deficits in FCF. Those shortfalls need to be filled either by draining cash already on the balance sheets, often raised at the IPO, or constantly amassing new funds by issuing stock or bonds, a frequent occurrence at Tesla, for example.

To get the numbers, I went back to the companies’ earliest published financial reports, starting with the offering statements for their IPOs. It’s notable that those documents show virtually all of the losses-from-inception for the Fab Four, but exclude a big share of the deficits for the Breakneck Burners. Hence, while the amounts burned for the relative oldies include almost everything, the numbers I cite for the relative newcomers don’t encompass many billions in losses from their first few years that aren’t spelled out in the early filings. As a result, the gulf in cash burn for the two camps is even bigger than my numbers show.

The comparison with the Fab Four doesn’t mean the big burners can’t eventually prove successful. It does mean that the established tech superstars followed a different path, and aren’t remotely a model for the Breakneck Burners.

So let’s examine each of the eight companies as we work our way to those spectacularly-contrasting totals, starting with the Fab Four.

Of all the Fab Four, Amazon posted the largest cash shortfalls in its early years. Examining years following its launch in 1994, the numbers are almost quaint. The new venture had negative FCF of $10.6 million from 1994 to 1997, a period where total sales were $164 million. The only major underwater span in its history came from 1999 to 2001. Negative FCF in that three year period totaled $813 million. But the mail order house was on an upward trajectory. In 2002, it roared into the black, and by 2004, its FCF stood at $478 million. So by its 11th year, Amazon had earned back the equivalent of the entire deficit, and more.

Amazingly, Google appears to never have been cash significantly cash flow negative. The prospectus issued for its IPO in August of 2004 provides cash flow numbers back to 2001. That year––Google was founded in September of 1998––the web startup had cash from operations of $31 million, and capex of $10 million, yielding FCF of a positive $10 million, and the surplus accelerated from there, reaching $219 million by 2003. The offering statement does disclose that Google had negative net income totaling $21 million in 1999 and 2000. But it also shows depreciation, a non-cash charge that’s added back to calculate FCF, almost equalled those GAAP losses, meaning that its cash flow was at most negative by a tiny amount for a year or two, and has been positive every year since over its two-decade existence.

Facebook went public in May of 2012, and its prospectus gives detailed cash flow numbers dating back to 2007, when it had a mere $153 million in sales. From the start, Facebook had positive cash from operations so that the money generated from its basic business helped fund its expansion. But in 2007 and 2008, its capex outweighed the contribution from operations. The total shortfall for those two years was $143 million. In 2009, Facebook turned the corner, making $66 million in FCF, and the upward trend accelerated from there.

Apple is a fascinating case study, because the Mac-maker did undergo a few years of steeply negative cash flow, a phenomenon that may be remembered by fans of a Snap or Lyft when they dismiss their big cash deficits. That occurred not at the start, but in a middle period when Apple was already a $8 billion enterprise that had previously been profitable.

Apple’s 1980 offering statement for its IPO shows just one year of negative free cash flow, minus $10,000 for 1977—talk about quaint! By 1980, the figure reached $9 million, and kept rising until a rough patch starting in 1993 under CEO Michael Spindler. In 1993 Apple had FCF of -$865 million, and suffered another deficit of $399 million in 1995. But Apple never showed consistent shortfalls; it careened yearly from positive to negative territory, posting strong free cash flow in 1994 and 1996. The turning point came with the return of Steve Jobs in 1997. After a few more erratic years, cash flows exploded in the early 2000s. Conclusion: Apple never showed negative free cash flow in its early years, and only weathered short-lived deficits as a mature player.

Tesla went public in mid-2010, and its prospectus provides cash flow numbers from 2006. That year, FCF was a minus $10 million, and the freefall followed. In 2014, the deficit hit $1 billion, then jumped to $4.1 billion in 2017. In 2018, it appeared that Tesla might be starting to ascend. It posted cash from operations of $2.1 billion, that came close to matching capex, so that its FCF hole shrank to a negative $222 million. The reprieve was short-lived, In the first quarter of this year, sales tumbled and FCF fell to minus $945 million. The renewed descent forced Tesla to raise $2.4 billion in equity and debt funding to forestall running out of cash.

Total Tesla cash burn: $10.9 billion over 12 years. (Since we have numbers going back to 2006, that represents almost 100% of the deficit over its entire life.)

In the offering statement to its long-awaited IPO in May, Uber revealed FCF numbers for just three years, from 2016 through 2018. In 2016, Uber posted negative cash from operations of $2.9 billion and spent $1.6 billion in capex, for a negative FCF of $4.5 billion. Since then, the shortfalls have been shrinking, although they remain substantial: FCF improved to minus $2.2 billion in 2017, and -$2.1 billion last year (equal to 19% of revenue). Uber was created in 2010, but does not disclose its losses for its first six years. Tesla appears to have gone through billions more of $21 billion it’s raised in debt and equity, though the precise number is impossible to determine.

Total Uber cash burn: $8.9 billion over 3 years (not including losses from earliest years).

Created in 2012, Uber-rival Lyft provided numbers for only three years when it went public in March, echoing the disclosures from Uber. In 2016, it burned $496 million in FCF, and the trajectory is improving slightly at best, In 2018, the shortfall shrank a bit to $350 million but in Q1 of this year, it stood at $110 million, up from $83 million in the first three months of 2018. Once again, based on the amounts raised and remaining cash on its balance sheet, it appears that the total losses since its launch are considerably higher.

Total Lyft cash burn: $1.36 billion over 3 years and 1 quarter, (not including losses from earliest years).

Snap went public in March of 2017, so we can measure its burn based on four years of past performance versus three for Uber and Lyft. In 2015, the photo-sharing phenomenon had a FCF shortfall of $326 million, rising to $819 million in 2017, then flat-lining in 2018. In Q1 of this year, however, FCF improved substantially as the basic business performed a lot better, posting cash from operations of $66 million, a 70% improvement from the same period last year.

Still, it’s instructive to look at how much cash Snap is burning in relation to all money it collects marketing its service. From the start of 2017 through Q1 of this year, Snap had $2.35 billion in revenues, and churned through 73% of that amount in cash.

Total Snap cash burn: $2.71 billion over 4 years, (not including losses from earliest years).

Now we’ve journeyed to the ledge, where the full chasm is coming into view. All told, the Fab Four had total negative free cash flow in their early years of almost exactly $1 billion, posted by just two companies, Amazon and Facebook. Those two lost significant amounts for a total of only five years.

The Breakneck crowd burned $23.8 billion in total, encompassing 21 years of FCF deficits. Even adjusted for inflation, considering that the Amazon shortfalls came in two decades ago, they’ve out-spent the Fab Four by a ratio of around 20 to 1. To be sure, smart investors are betting that the Burners will soon turn positive, and that may happen. But the longer they keep digging, and the deeper the hole becomes, the harder it will be to eventually reward their fans. The Fab Four, by contrast, are some of the biggest winners of all-time, and they got there taking a starkly different route.

—Warren Buffett’s best stock picks over the past year

—“Staggered” boards are paying off for stock investors

—Why “debt ceiling” may become a buzzword this summer