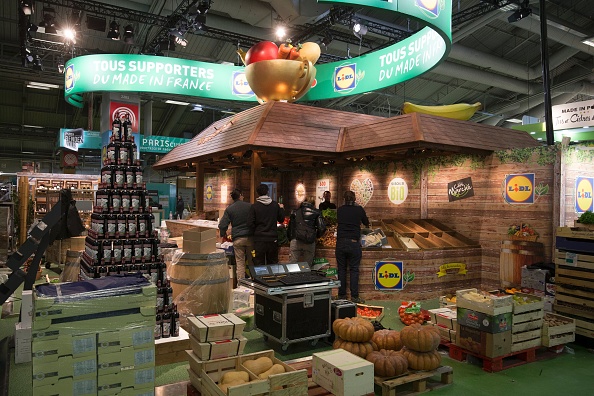 Lidl, a Teutonic discount supermarket chain, is set to open its first U.S. stores next month, in a move that could jeopardize Walmart’s (WMT) hard fought share gains in the lower-priced grocery wars.

The retailer announced on Wednesday its first 20 U.S. stores would open June 15 in the Carolinas and Virginia, with another 80 slated within a year. Lidl, pronounced “Leedle,” will go head to head with another German discounter, Aldi, and other grocers using its well-honed strategy of operating no-frills, small stores of about 20,000 square-feet and a heavy emphasis on store brands it says are on par with national brands. Some 90% of merchandise will be its own products, a tactic that offers higher margins and more control over inventory and offer low prices.

At a media event earlier in the week in New York, Lidl sought to burnish its image as a purveyor of quality products despite the lower prices and tap what it considers an underserved markets. Among the products it displayed were certified fresh and frozen seafood, wines, Italian cheeses, and baked goods.

“This is the right time for us to enter the United States,” Brendan Proctor, Lidl U.S. CEO, told reporters.

Lidl, which is well established in Europe with about 10,000 stores, could grow to have a $8.8 billion in sales by 2023 with 630 stores, according to a 2016 forecast by Kantar Retail. And rivals are taking notice.

The move represents a new challenge to traditional grocers like Kroger (KR) and Walmart (WMT), which last year rolled out vastly improved fresh food sections at thousands of stores. Though Lidl is unlikely to be a place where shoppers do their full week’s grocery, its lower prices could hurt the likes of Walmart or Target (TGT) for so called “fill-in” trips, when people go to pick up a few items. And Lidl’s arrival comes at a time when Whole Foods Market (WFM) is expanding its 365 chain of lower-price grocery stores.

Walmart has long felt pressure from Aldi, which first came to the U.S. in 1976 and now has 1,600 U.S. stores, including many it is upgrading as part of a $1.6 billion program. But it is clear Lidl means business. Reuters recently reported that Walmart is running price tests in 11 U.S. states, pushing suppliers to beat rivals’ prices by 15% percent, while Aldi is gunning for prices 21% below competitors in the U.S.

While it’s unclear how much of the market Lidl will be able to grab, its arrival comes at a time most grocers are dealing with lower food prices and decreasing sales, even at long time winners like Kroger and Publix. The food fight among grocers is only getting started.