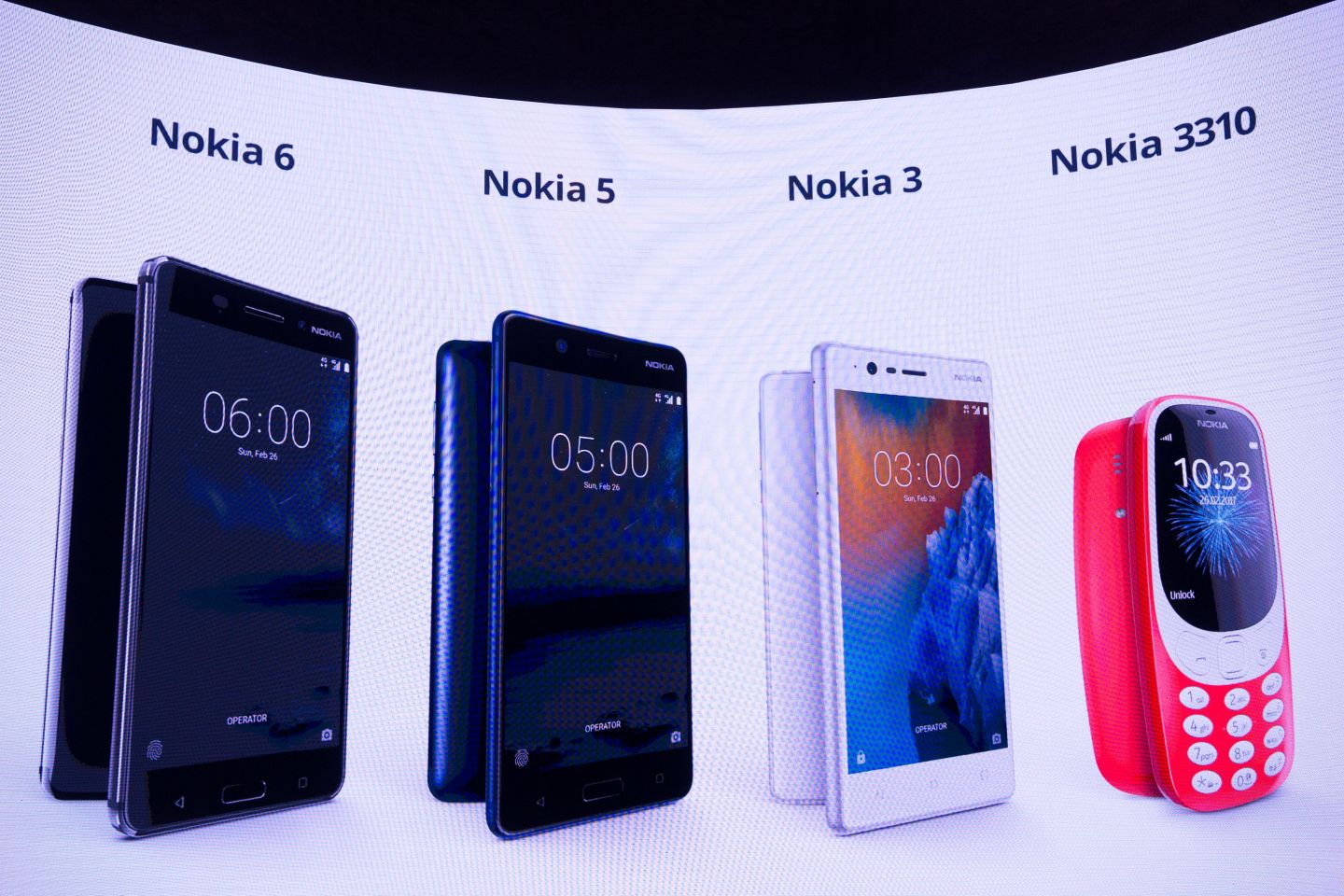 New phone models by Nokia are displayed on a screen during the presentation of the new models "Nokia 6", "Nokia 5", "Nokia 3" and "Nokia 3310" during a press conference on February 26, 2017 in Barcelona on the eve of the start of the Mobile World Congress. Phone makers will seek to seduce new buyers with even smarter Internet-connected watches and other wireless gadgets as they wrestle for dominance at the world's biggest mobile fair starting tomorrow. / AFP / Josep Lago (Photo credit should read JOSEP LAGO/AFP/Getty Images)
JOSEP LAGO AFP/Getty Images

The Nokia brand ruled the phone market for decades, until Steve Jobs brilliantly disrupted the status quo with the iPhone and the open-ended world of apps. Unable to match the iPhone and beset by a wave of cheap competitors from Asia, Nokia quickly slid into oblivion.

Now Nokia is trying for a comeback. Well, not Nokia exactly. The former top phone maker sold its phone business to Microsoft, which has all but shut it down. It kept some brand rights, which it licensed last year to a Finnish startup called HMD Global.

On Sunday in Barcelona, HMD announced a slate of low-cost new phones that will be sold under the Nokia brand. The company, run by a cast of former Nokia executives, is clearly counting on some untapped nostalgic market demand for the old Nokia brand.

HMD to put “a true Nokia soul in our devices—you will sense it,” CEO Arto Nummela announced at a packed press conference ahead of the Mobile World Conference industry gathering.

Huawei Aims New Watch, But Not Phone, At U.S. Market

The new phone line starts with the previously announced Nokia 6 with a 5.5-inch screen and selling for 229 euros, or about $242. A slightly smaller Nokia 5, with a 5.2-inch screen, goes for 189 euros, or $200, and 5-inch model called the Nokia 3 will sell for just 139 euros or under $150. All three models rely on Google’s (GOOGL) Android software. None will be available in the United States immediately, though one HMD official said that would happen later in the year.

Aside from the industry standard smartphones, the real attention grabber at Saturday’s event was a refreshed, updated dumb phone, a new version of Nokia’s 3310 phone. Looking quite like the original issued in 2000, the new 3310 has the same old-fashioned keypad and comes in a couple of bright plastic-y colors. A small color screen and potentially weeks of battery life round out the 49 euro ($52) device.

Nokia said its initial run of the 6 model offered in China had sold out in 23 seconds, with a large majority of buyers new to the Nokia brand. The quick sell out could reflect limited manufacturing as much as the popularity of the new model. But HMD should have more stock on hand for the new phones, and now the 6 also, as they will be available in most of the world in the second quarter.

Beyond Phones and 5G, Mobile World Seeks to Reinvent Itself

This being the modern, global phone economy, HMD doesn’t actually make any of the new phones either. That task falls to Foxconn, the Chinese outsourced manufacturer that also makes Apple’s (AAPL) iPhone. In addition to the brand license deal with Nokia, Foxconn and HMD paid $350 million to Microsoft (MSFT) last May for the assets to manufacture Nokia (NOK) phones.

Nokia was prominently represented as a company at the press event. Nokia CEO Rajeev Suri made the opening remarks and gave his pitch for other actual Nokia products, like the Withings line of smartwatches the company recently acquired.

Touting his confidence in the HMD approach, Suri said he would not “license the Nokia brand to just anyone.”

Nokia’s prominence stood in stark contrast to the almost complete absence of any official BlackBerry presence at a similar event on Saturday. TCL Communications, a Chinese phonemaker that licensed BlackBerry’s brand, unveiled its new device, dubbed the BlackBerry Key One. But only one minor Blackberry (BBRY) executive made an appearance, touting the company’s security software for the phone.

The heavy Nokia presence made sense, given HMD’s roots. CEO Nummela worked there from the beginning of the company in the 1990s, until he transferred to Microsoft when the phone business was sold. Now he’s relying heavily on brand love for his former company.