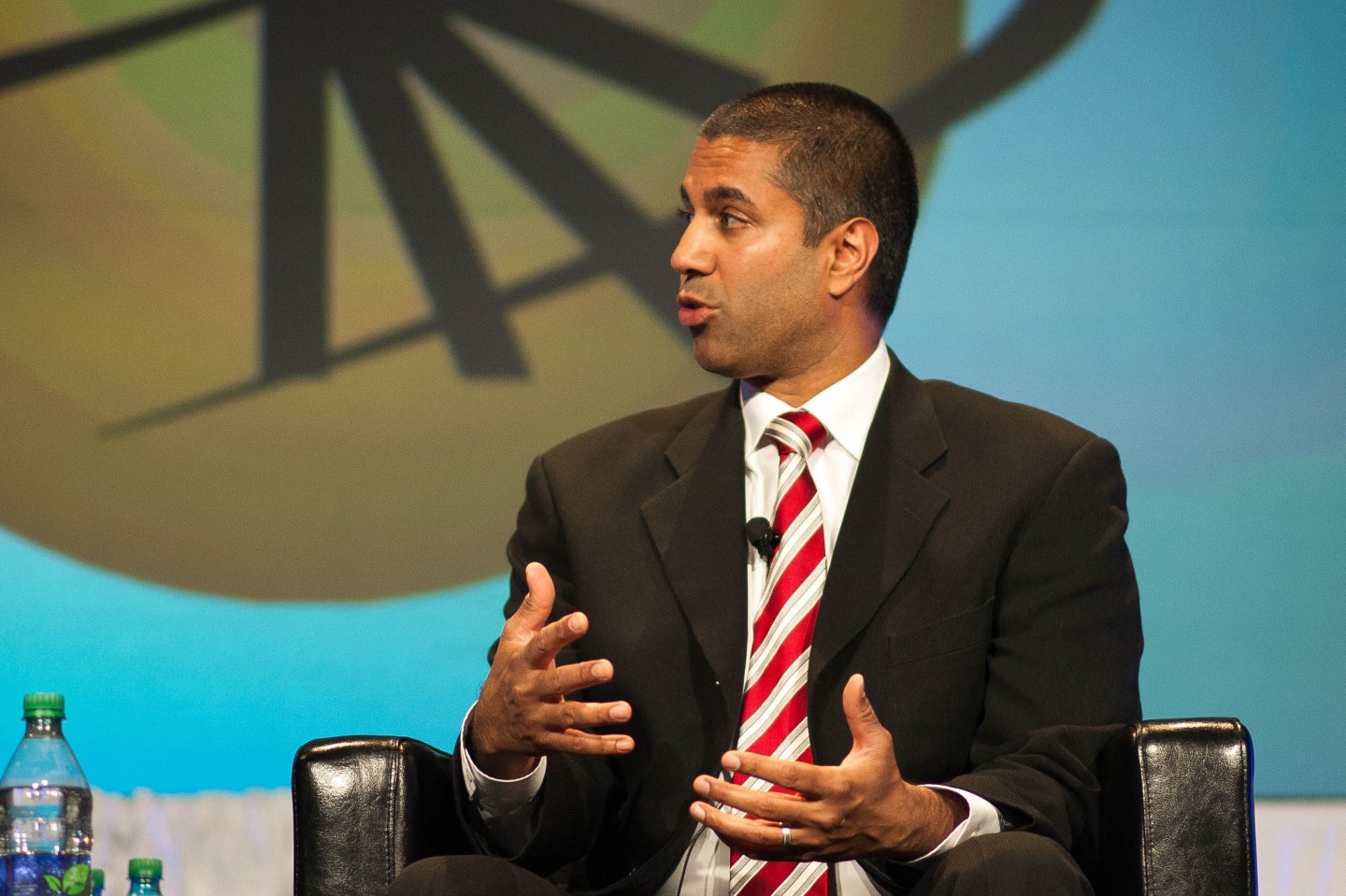 Ajit Pai, commissioner of the U.S. Federal Communications Commission (FCC), speaks during a panel discussion at the Canadian Telecom Summit in Toronto, Ontario, Canada, on Monday, June 6, 2016. The Canadian Telecom Summit is a 3 day conference in which telecommunications, broadcast and IT industry leaders come together to discuss issues and trends that impact universal connectivity. Photographer: James MacDonald/Bloomberg via Getty Images
Credit: Bloomberg via Getty Images

The new Republican chairman of the Federal Communications Commission, Ajit Pai, didn’t wait long make good on his intention to roll back the agency’s net neutrality efforts to protect competition on the Internet.

On Friday, the agency formally rescinding a report it had issued under Obama-appointed chairman Tom Wheeler that blasted AT&T and Verizon for favoring their own mobile video services over competitors. The two carriers allow customers to watch their video services on mobile phones without counting against monthly data caps, a practice known as zero rating. Competing services have to pay the carriers to make the same offer to their customers.

“Going forward, the Federal Communications Commission will not focus on denying Americans free data,” Pai said in a statement. “Instead, we will concentrate on expanding broadband deployment and encouraging innovative service offerings.”

President Donald Trump named Pai as FCC chairman last week. A former lawyer for Verizon who has served as an FCC commissioner since 2012, Pai has been an outspoken critic of the net neutrality rules adopted in 2015. The rules prohibit Internet service providers from blocking, slowing, or otherwise discriminating against any online content.

The FCC’s wireless bureau under Wheeler had concluded that the zero rating by the big carriers likely violated the net neutrality rules and harmed competition by giving an unfair advantage to the carriers services, including AT&T’s (T) DirecTV Now cable-like TV offering and Verizon’s (VZ) short video Go90 app. The agency, however, concluded that T-Mobile’s (TMUS) program to allow customers to watch numerous, third-party video and music services without counting against data allowances was not a problem.

On Friday, the agency also said in addition to canceling the report, it would close separate enforcement probes challenging the two big carrier’s zero rating actions, which could have resulted in further sanctions or limitations eventually. And the agency cancelled a previously unreported request to Comcast (CMCSA) seeking more information about its Stream TV service, which is exempt from the company’s broadband service data caps.

“Today, the Bureau sent letters to AT&T Mobility, T-Mobile, and Verizon Wireless closing the inquiries into each company’s sponsored data and zero-rating offerings, taking no further action,” the agency said in a statement. “The Bureau now sets aside and rescinds the Policy Review Report and any and all guidance, determinations, and conclusions contained therein, including the document’s draft framework. The Policy Review Report will have no legal or other effect or meaning going forward.”

Pai also ordered seven other reports, orders and agency actions from Wheeler’s last few months cancelled, including designating nine companies as providers of subsidized Internet connections to low income consumers. The nine small Internet service providers had won permission to use federal subsidies to offer cheap Internet connections, while most larger carriers, such as AT&T and CenturyLink had opted largely not to participate.

AT&T CEO Randall Stephenson predicted in December that the agency would drop the net neutrality push under at Trump.

The zero rating decisions were earlier reported by Multichannel News.