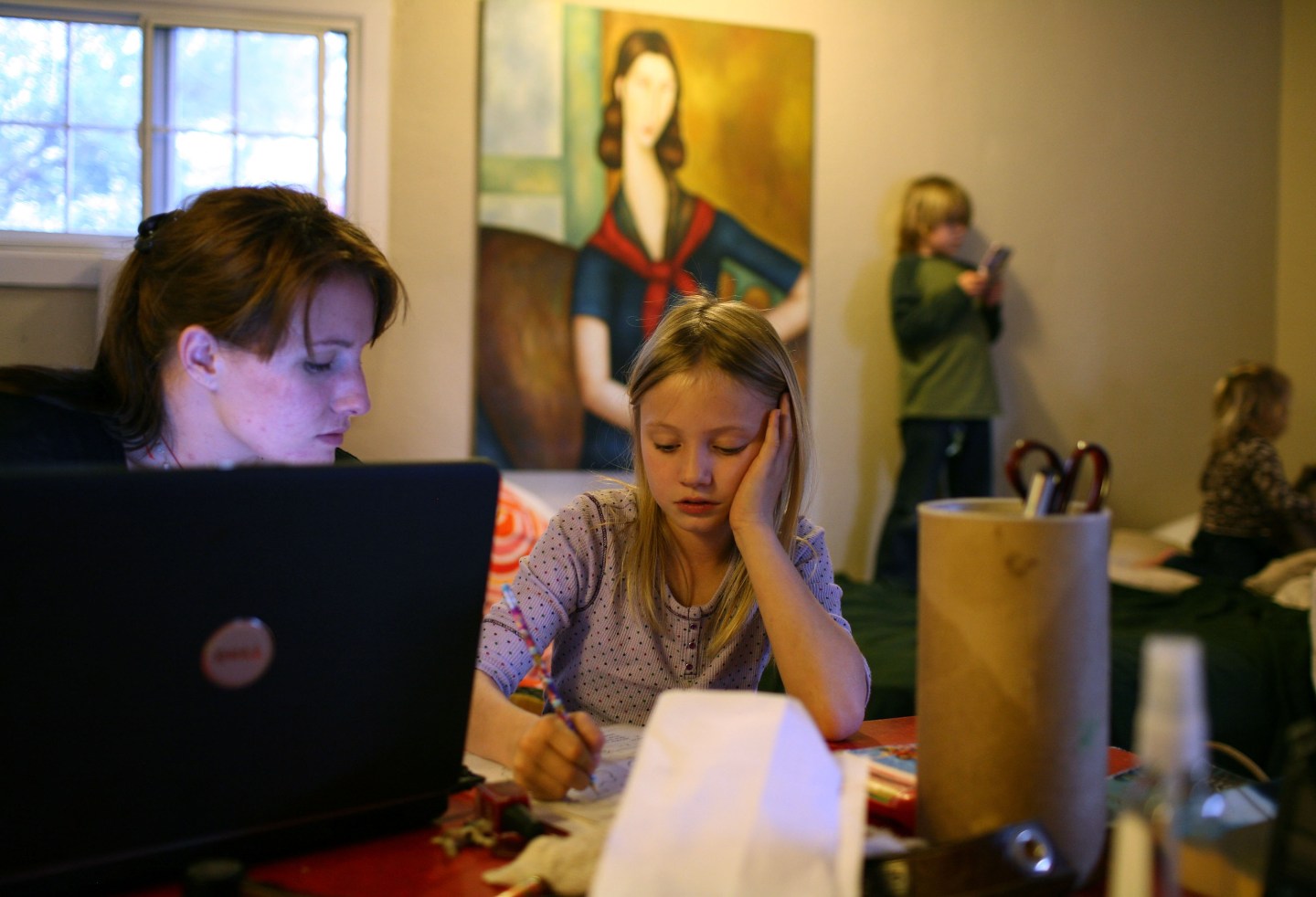 SACRAMENTO, CA - MARCH 05: (L-R) Brittney Nance helps her daughter Izabella, 7, with homework as Henry Nance, 5, and Lillie Nance, 2, play on the bed in their motel room at the Old Town Inn March 5, 2009 in West Sacramento, California. Brittney and her family were evicted from the house they were renting after her husband, Steve Nance, lost his job. The couple and their three children are living in a budget motel while they save enough money for deposit on a new rental home, but are finding it difficult as they pay nearly $1200 a month for the motel room. All five live in a small studio sized room with most of their belongings. (Photo by Justin Sullivan/Getty Images)
Photo credit: Justin Sullivan Getty Images

For decades, low-income households have been getting subsidized telephone service under the federal government’s Lifeline program. Back in April, the Federal Communications Commission, which oversees the program, decided to extend the subsidy to cover broadband Internet service as well. After all, about one-third of the 40 million households eligible for the Lifeline program lack broadband.

But the best laid plans of the FCC aren’t working out–at least right away–for most of the people eligible for the Lifeline program who may want to use the subsidy to cover Internet service.

It turns out that the major telecommunications companies involved are opting out of the broadband expansion plan. AT&T has already told the FCC it will opt out in most of its territory. Verizon (VZ), CenturyLink (CTL), and Frontier (FTR) are also expected to do the same. Companies have until Friday to notify the agency.

Update: Frontier filed to opt out of the broadband subsidy in the majority of its territory, where it was not required, as AT&T had done. CenturyLink did the same in its filing, technically absolving itself of the requirement, but also said it would still offer the Lifeline broadband discount where it offered at least 10 megabits per second download speeds. Verizon sought forbearance from the requirement except where it offers Fios Internet service.

The moves have some advocates for the poor fuming given the importance of Internet connectivity for school work, finding a job, and other critical tasks.

The carriers say they have some existing programs to address the broadband shortfall. And they say they may join the FCC’s broadband program in the future after the agency completes some planned improvements in oversight.

The FCC on Thursday announced that several Internet providers that had not been part of the old Lifeline program had joined the new broadband segment. For example, Spot On Networks will offer wireless broadband to a major housing project in Queens, New York, for under $10 per month.

A number of public advocacy groups this week criticized AT&T’s filing–the only one that has arrived at the FCC so far–including the National Hispanic Media Coalition and the Greenlining Institute. The United Church of Christ, the National Consumer Law Center, and the Benton Foundation also criticized the company.

“Lifeline is an historic initiative that will help connect millions of Americans to the home and mobile broadband that could serve as their pathway out of poverty with access to greater educational and economic opportunities,” Jessica Gonzalez, general counsel at the National Hispanic Media Coalition, said in a statement. “AT&T’s decision to opt out of obligations sets a dangerous precedent for other carriers who may also choose to neglect low-income customers.”

The Lifeline program has struggled with inefficiency and fraudulent claims in the past as unscrupulous resellers signed up ineligible people or signed individuals up for multiple accounts and took a cut of the subsidies. The FCC has cracked down on such scams for the past few years, and the April order called for the creation of a new, independent entity to verify all claims, instead of leaving that task to the carriers. But AT&T says the new entity won’t be fully up and running until 2019.

“It makes little sense to spend resources on implementation of soon-to-be-replaced administrative rules for a new service when we are already offering low-income consumers a better deal,” Joan Marsh, senior vice president in AT&T’s Washington lobbying office, wrote in a blog post. AT&T currently offers a $10 per month broadband service, called Access, to people who are in the government’s Supplemental Nutrition Assistance Program, formerly known as food stamps, Marsh noted.

To learn about an FCC plan to speed up broadband, watch:

But there are several problems with that approach, according to the advocacy groups. SNAP eligibility is based on income, but also has time restrictions and other limits. AT&T’s Access program also requires a credit check and an online application, which pose barriers for some low income consumers.

The FCC said the new independent verification program would start in five states by the end of next year. As the program rolls out to more states, the burden on carriers will be reduced, prompting more participation, the agency expects.

(Update: This story was updated on Dec. 6 with the results of the final filings from carriers.)